What #PortlandMoms Tells Us about Whiteness and Motherhood | Bitch Media

Why Is Activism Reserved for White Moms? 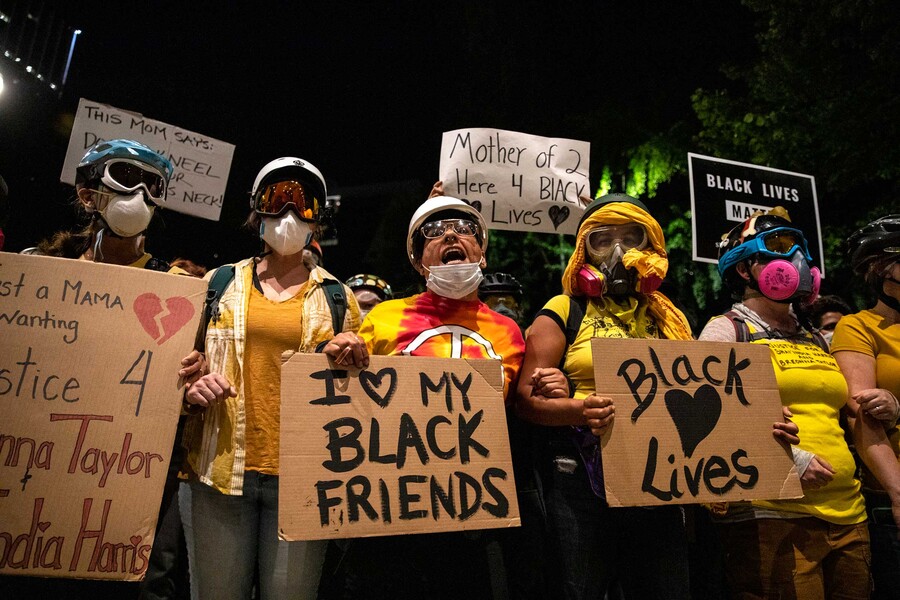 A group of moms in Portland, Oregon, made international headlines in July for showing up to the city’s ongoing protests against racial injustice. The group, called the “Wall of Moms,” told the Washington Post that they felt compelled to join the demonstrations after seeing footage of the police killing of George Floyd in May. “When you’re a mom you have this primal urge to protect kids, and not just your kids, all kids,” Wall of Moms organizer Jennie Vinson told the Washington Post. “To see a grown man reaching out and calling for his mother—I think that was a transformational moment for so many of us. It’s like: What choice do we have but to do this?” The overwhelming media interest in this nascent collective of moms in Portland belies the fact that moms have always been an integral part of community organizing, especially around ending police violence. And it’s difficult to ignore that the #PortlandMoms are receiving international press coverage while other longtime organizer moms aren’t because many of the Wall of Moms participants are white.

But where do these deep-seated assumptions come from, and how has this particular representation of motherhood grown to dominate our popular imagination? If we borrow from feminist theory that motherhood, like womanhood, is a social construct, then it’s important to historicize its origins. The dominant understanding of motherhood in the United States is rooted in early America. Laurel Thatcher Ulrich, a historian of early America, writes in her 1991 book, Good Wives: Image and Reality in the Lives of Women in Northern England, 1650-1750, that while their Puritan forebears didn’t believe that mothers were capable of exercising the authority needed to raise Puritan children, early Americans developed a special place for mothers in the moral and religious education of their kids. This was evident during the revolutionary era, where mothers were charged with raising the children of a new American nation, who would secure the American experiment in republican governance. Mothers were expected to foster republican mores and manners in their children.

The concept of motherhood became further entwined with white, middle-class, republican ideals during the 19th century. In Modern Motherhood: An American History, women’s studies and history professor Jodi Vandenberg-Daves wrote, “Many people worried that in an increasingly commercial society, men would lose their moral bearings in the rough-and-tumble world of money.” Maintaining the virtues of the young republic thus fell to mothers, who were expected to tend to their homes away from the temptations of business and politics. The long duration of slavery in the United States also ensured that our modern understanding of motherhood is deeply racialized: Enslaved women were denied every right to nurture their children, and because the children of enslaved women were born enslaved, Black women’s reproductive capacity was highly commercialized in the interest of sustaining the institution of slavery. While enslaved women were appraised for their fertility, they were afforded no special status as mothers and, beyond rudimentary measures meant to ensure infant survival, were subjected to the same inhuman treatment as their counterparts.

Angela Davis summarizes the position of the enslaved mother, writing that “in the eyes of the slaveholders [they] were not mothers at all; they were simply instruments guaranteeing the growth of the slave labor force.” The notion of the Black mother as a reproductive machine stood in stark contrast to the dominant idea of motherhood at the time, which emphasized a mother’s role as a nurturing and gentle companion to her children. This iconography of depraved Black motherhood has endured and evolved, reappearing as potent racists stereotypes of Black moms and perpetuating their devaluation. Reform groups proliferated in the 19th century, and, from temperance leagues to religious societies and abolitionist movements, white women began to play prominent roles in community organizing. Women in reform movements often fashioned themselves as mothers of the nation. They saw themselves as not only responsible for the moral education of their children but also for the moral reformation of society, and they exerted pressure in the public sphere to influence policy.

Women reformers achieved several notable victories during the 19th and early-20th centuries, but many of these reforms worked to strengthen the notion of white, cisgender, heterosexual, able-bodied, Christian, married, middle-class motherhood as the only proper form of motherhood. Maternal reformers were, for example, influential in the development of the fledgling welfare state at the height of the progressive era through their work in the United States Children’s Bureau. Through the Children’s Bureau, white women successfully lobbied for pensions for mothers who lacked the support of a male breadwinner in several states. While their goal was to provide a measure of economic security to single moms, strict eligibility criteria ensured that the mothers who qualified for pensions were almost solely white widows who adhered to conventional morality.

While Black women were disproportionately impoverished, they were unlikely to receive assistance. When sociologists Kenneth Neubeck and Noël Cazenave examined historical sources for their 2003 book Welfare Racism: Playing the Race Card Against America’s Poor, they discovered that Black mothers were often denied pensions because of a widespread attitude that “have always gotten along,” and a belief that if they were given pensions “all they’ll do is have more children.” These racist ideas harken back to the notion of the enslaved woman as a reproductive machine, and they’re the same ideas that the potent welfare queen stereotype would be born out of. The significant social and political battles surrounding motherhood in more recent U.S. history have arisen over policies like forced sterilization and family separation, which are eerily similar to the discriminatory policies of decades passed. They serve to remind us that poor women, disabled women, and women of color have never been able to rest secure in their rights as mothers.

Black moms who have been involved in those same protests for decades attract much less attention and little acclaim.

These days, groups like Mothers Against Drunk Driving, Moms Demand Action, and Portland’s Wall of Moms continue to leverage the archetype of the national mother as they work toward policy reforms. As onlookers conditioned by a racist history, it’s easy for us to recognize the mostly white women at the forefront of these organizations as moms and understand their work as a function of mothering. These moms don’t seem “threatening” to viewers, and aren’t portrayed as such, because these moms are white; a wall of Black mothers is demonized, while a wall of white mothers are gifted halos. Media are keen to give these moms airtime, even when, like with the Wall of Moms, their work seems to start and stop at just showing up to a protest. Meanwhile, Black moms who have been involved in those same protests for decades, like Portland activist Demetria Hester, attract much less attention and little acclaim.

When her son, Clinton Allen, was killed by a police officer in 2013, Collette Flanagan founded Mothers Against Police Brutality. Trayvon Martin’s mom, Sybrina Fulton, ran for a seat with the Miami-Dade County Board of County Commissioners and lost by less than 1 percent just this month; she was inspired to run for office after the murder of her son in 2012. Michael Brown’s mother, Lesley McSpadden, ran for city council in Ferguson, Missouri, in 2019, nearly five years after a police officer murdered her son. Both Fulton and McSpadden are members of Mothers of the Movement, an organization that pushes for racial justice policies. Now, Portland’s Wall of Moms has begun to collapse under accusations of being anti-Black. Problems with the Wall of Moms arose after Bev Barnum, one of the group’s founding members, registered the group as a business without the approval of fellow Black leaders. Many followers accused Barnum, who is Mexican American, of failing to prioritize justice for Black lives.

A group of three Black women activists, including Hester, has since broken away from the Wall of Moms and organized as Mothers United for Black Lives, an organization promising to keep Black Lives Matter at its forefront—and, it’s not surprising that this group hasn’t garnered nearly as much national media attention. After all, the mom-box has been checked, and it was offered to white mothers. When we consider the history of motherhood in the United States, it’s not surprising that mainstream media so quickly embraced the Wall of Moms. But it’s important to recognize that by doing so, the media has not only done a disservice to the many other moms who have long labored as organizers, but they’ve given credence to a harmfully narrow definition of motherhood. If we continue to limit our recognition and representations of motherhood to mostly white women, we will continue to exclude and marginalize a proliferation of other possibilities for motherhood, and we’ll continue to actively fail the moms of color and the Black mothers who have been doing the work before the cameras came and will be doing it long after. 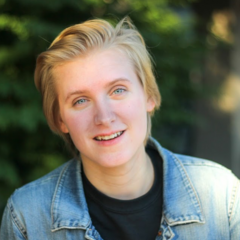 Marianne Dhenin is a writer and researcher based in Cairo. She holds a master’s degree in Human Rights Law and Justice and is earning a Ph.D. in Middle East History. She writes about social justice, politics, and the Middle East. You can follow Marianne on Twitter at @mariannedhe.