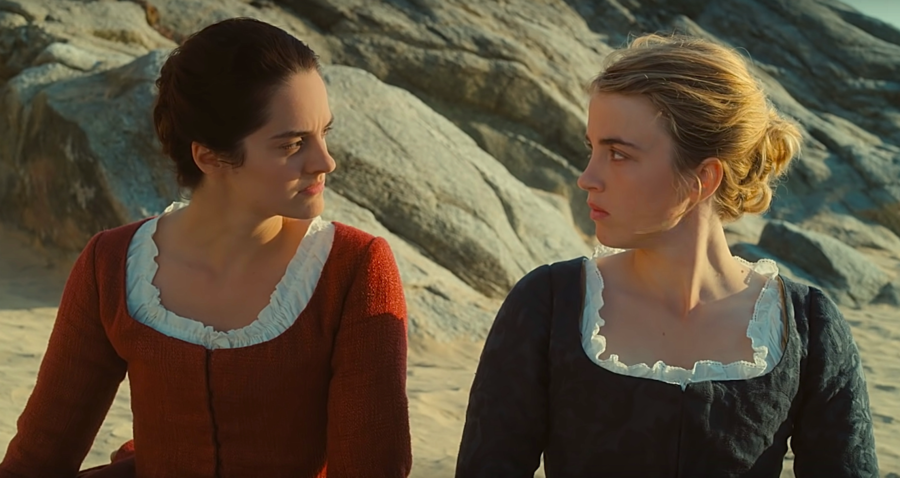 Noémie Merlant as Marianne, left, and Adèle Haenel as Héloïse in Portrait of a Lady on Fire (Photo credit: Neon)

Some folks might not associate abortions with babies; for some, the two might even seem diametrically opposed. But director Céline Sciamma disabuses viewers of this perspective in her 2019 film, Portrait of a Lady on Fire, a gorgeous, minimalistic romance depicting two French women in the 1770s. Marianne (Noémie Merlant) is commissioned to paint a portrait of Héloïse (Adèle Haenel) to be given to Héloïse’s future husband. Héloïse refuses to sit for the portrait because she doesn’t want to marry, so Marianne must secretly observe her subject, and then paint her from memory. Sciamma creates an egalitarian, female world that for most of the film brings to mind the word “utopia,” not because it’s free of pain but because it’s free of manacles.

This freedom extends beyond Marianne and Héloïse’s romance, and into the freedom to do as one pleases. In a compelling subplot, young housemaid Sophie (Luàna Bajrami) learns she is pregnant and has an abortion. The radical portrayal of the abortion—and the way the three women reflect on it—stands out in the relatively recent spate of onscreen abortion stories: Sophie learns she’s pregnant after telling Marianne that she hasn’t had her period; Marianne coolly asks if she wants to have a baby; Sophie says no. End of discussion. There’s no backstory, and no mention of the father—in fact, for much of the movie, there are no men at all. Sophie makes her own decision, and that’s that. The abortion takes place in an herbalist’s home, the scene notably cozy; it’s aesthetically warmer than one would imagine an abortion scene in a film to be.

Since the film is set in the 1770s, Sciamma avoids showing the sterility of an abortion clinic, usually portrayed in gray and white shades. This firelit scene seems anything but sterile. The film’s painterly cinematography adds an intimate, expressive layer to the scene, full of soft shadows and supple cloth dresses rather than sharp angles of an exam table and a flimsy paper gown. There’s no stainless steel here; just a soft bed and a welcoming fire. And since this event occurs in the women’s egalitarian microcosm, at a time when abortion perhaps didn’t carry the same connotations that it does for other protagonists having abortions, there’s no apparent societal pressure weighing on Sophie.

Cherubic, living babies loll on the very bed where Sophie lies down. The herbalist lifts up Sophie’s skirts to perform the abortion, and the camera doesn’t cut away at all during the procedure, not shielding viewers from what’s happening or softening the event in any way. Instead, it shows an aerial close-up of Sophie’s face. Viewers watch as Sophie grimaces through physical discomfort and begins to cry—but a giggling baby, resting nearby, turns to her, making Sophie smile. Sciamma forces viewers to witness the entire scene; Héloïse pushes Marianne to do the same. When Marianne looks away, Héloïse urges her not to: “Regardez” (“Look”).

In a film where the female gaze leads the way, the act of witnessing something so unflinchingly becomes profound. The women are experiencing something impactful, and by electing to illustrate this small moment within the larger event (the abortion), Sciamma not only shows the procedure in full, but shows that other people—other women—knew about it. I imagined Sciamma saying, “Ce n’est pas un bébé,” referring to Sophie’s abortion. Sciamma shows us unequivocally what a baby is: the life form next to Sophie, not the dreamed-up baby pushed by anti-choicers in an attempt to shame those who have abortions.

This scene beautifully pares down an entire discourse surrounding abortion and reproductive healthcare, the dialogue around babies versus fetuses, and life versus clumps of cells. Sciamma simply creates a space where babies and abortions coexist. While anti-choice viewers might say, “Look, Sophie’s killing something that could become that baby,” and interpret the moment as Sophie feeling remorse for killing the baby she could have had, the message is clear: what is next to Sophie is a baby; what is inside of her, however, is not. As for what Sophie feels, we know she doesn’t want a baby, and that it was her decision not to have one.

“Portrait of a Lady on Fire” is transgressive not only because it portrays abortion, but because it applies warmth and connection to an act made to seem harsh and cold.

This portrayal could stop there, but the filmmakers choose to show the trio performing yet another defiant act. At Héloïse’s suggestion, that evening the three women re-create and paint Sophie’s abortion, an act that comes across as normal, suggesting that there may be a number of these paintings depicting abortions in the universe of Portrait of a Lady on Fire. By choosing to portray and paint it, they deem it important, a story worth telling. In a 2019 interview with Film Comment, Sciamma describes this scene as one already situated in a canon of erasure, a history of painters whose works and stories weren’t and aren’t recognized: “I’m always trying to bring to life the images that are missing. That doesn’t mean it should be a simple illustration—it’s not about just having an abortion scene, it’s also finding your own image, and a unique one. The infants consoling her as she gets the abortion isn’t an illustration—it’s a new image within an image that is already missing.”

It’s not just the abortion portrayal that’s radical, but the fact that Sciamma is reconstructing what was likely the experience of many women from that era. Sciamma’s deliberate portrayal and the women’s subsequent re-creation of it mirror each other. Sciamma’s extraordinary abortion portrayal is a sign of the times as more films normalize abortion and legitimize a pro-abortion stance onscreen. Sciamma’s work is transgressive not only because it portrays abortion, but because it applies warmth and connection to an act made to seem harsh and cold. This scene challenges filmmakers to search for and depict other missing images, as Sciamma mentions, novel ones we know happened and are happening, even if there’s little precedent. There’s a multitude of untold stories constantly occurring that merit representation, and films such as Portrait of a Lady on Fire show that digging up such untold or masked stories can result in immense beauty. 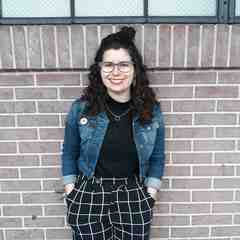 Elana Spivack is a writer based in NYC. Her humor, criticism, and personal essays have been published on McSweeney’s Internet Tendency and Alma. She is a cat person who is pro-Oxford comma.