Potty Mouth for the Teenage Soul 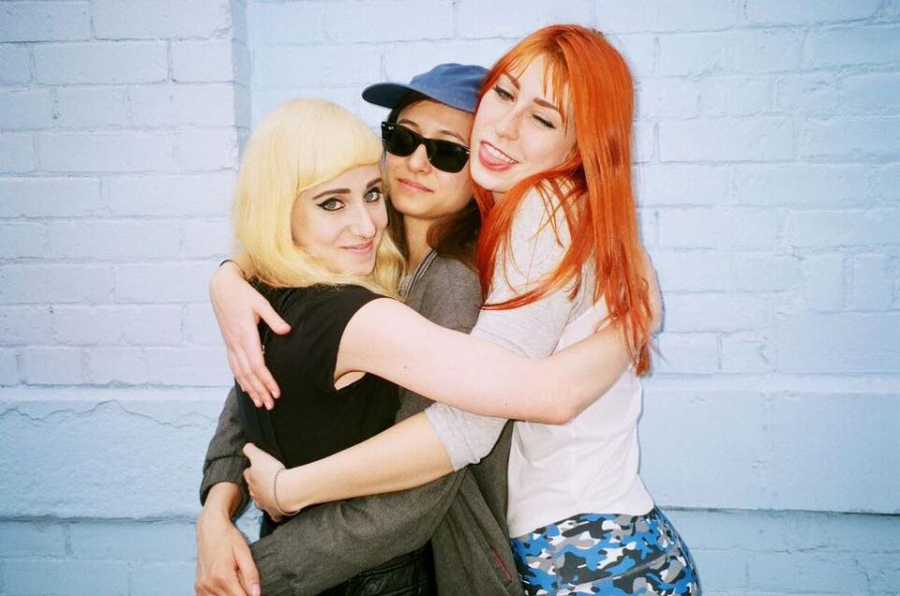 I wish that Northampton, Massachusetts-based band Potty Mouth had been around when I was in the thick of my angsty Green Day, Weezer, and Blink-182 phase. As an angry thirteen-year-old girl, I thought that my pubescent cocktail of emotions was invalid and unreasonable, unlike the emotions of the pop punk princes that blared through my headphones. I believed that my emotions were gross—too “girly.” The lyrics of the musicians I worshipped told me that, as a girl, I was irrational and unsympathetic to boys’ feelings. I swooned over misfit boys and listened to their turmoil instead of expressing my own.

Potty Mouth’s music provides a differing pop punk narrative. Their self-titled EP, with Ally Einbinder on bass, Abby Weems on guitar and vocals, and Victoria Mandanas on drums, is like a sparkly, sweet-and-sour jawbreaker: Its melodies are tough yet sugary. The album opens with “Cherry Picking,” where the chorus goes: “Cherry picking, do I want some of what you're living for my own? / Cherry picking, can I have some? / Feels like my basket isn't full.” Unlike the passive, aloof, and objectified women of my personal pop punk past, the protagonists in Potty Mouth’s songs are independent, evolving, assertive, and eager for more.

The album follows with “Creeper Weed,” which opens with a crunch like a bite into a hard candy. A bright guitar riff heads into the lyrics: “You say you think I’ve changed / that I just look the same / and nothing’s left of who you knew or thought I was / I see why it seems like that / it’s ‘cause I’m unattached / and nothings quite like being what I need at night / I am I am I am this way.” These lyrics are a refreshing reclamation of female identity and independence from the static, one-dimensional symbol of women of pop punk’s past.

I saw Potty Mouth live for the first time around a year-and-a-half ago in a sold-out show at a small venue in Seattle. The show had an amazing line up: Potty Mouth, Chastity Belt, and Perfect Pussy. It seemed like the room was bursting and sweat radiated off of the packed-in punks like steam. I wove my way toward the front of the venue, wriggling between the groups of dudes clad in leather jackets and patch-covered coats. As Potty Mouth started to play, an extremely tall man stood in front of me, so and I was only able to see the tops of the band’s heads. When I tried to slide past him to get a better view, he stood firmly in his place. He and his friends began to mosh while the music started. As a small-statured person and a novice to these types of shows, I could not keep my balance. I fell backwards, feeling embarrassed and out of place, onto a stranger behind me. Seconds after this happened, a woman helped me up and guided me to the front where she and a small group of other women were standing. There, I felt secure.

The album ends with “Truman Show,” whose lyrics resonate with me. It begins with the humbling line, “I wanted life to be a breeze but knowing me it wouldn't be.” The uplifting lyrics of the chorus follow: “I'll wait around but that doesn't mean that I'll do nothing / Get up off the ground / I'll show life what it's missing.” As the band played through this song at the sweat-drenched punk venue, I thought back to how I would have loved seeing this show as a teenager. During my years of uneasiness and rapid identity changes, I wish that I could have had Potty Mouth create the anthems I sorely needed. In short, I needed to know that my fluctuating feelings were valid as well. You should pick up Potty Mouth’s new EP for your own sugary rush, or for the angst-ridden teen in your life. I guarantee they will appreciate it.