Saving the World Before Bedtime: Why The Powerpuff Girls' Feminism Still Matters 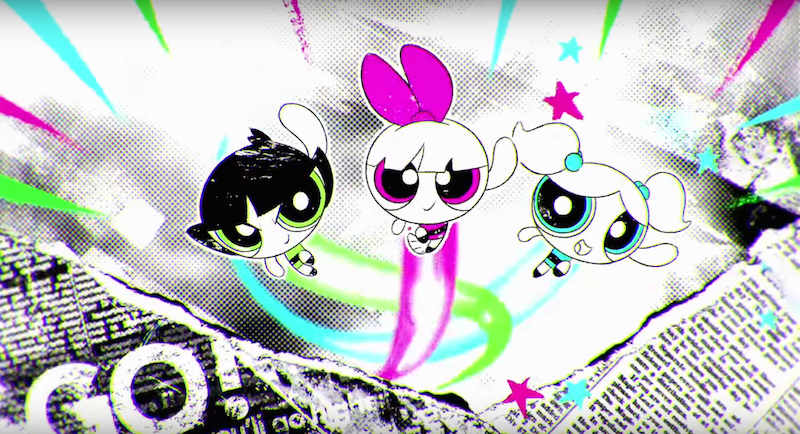 In a recent episode of the new The Powerpuff Girls reboot, the villainous Manboy (“all the power of a man in the body of a boy”) wreaks havoc on Townsville. Manboy’s power? A magical beard that can throw a manly punch. While he’s a cartoon villain, it’s easy to see his connection to real-world villains: anti-feminists who fear the end of men. Buttercup, the “tough” Powerpuff Girl, knocks out Manboy after he calls her “princess,” but not before he is able to get in the last word: “You throw like a girl.”

The message of The Powerpuff Girls, though, is that throwing like a girl is actually empowering. The show, which began in 1998, centers around Blossom, Bubbles, and Buttercup, three super-strong sisters who were accidentally created in a lab and now fight crime while still getting to bed on time. During its initial six-season run, the show proved that kicking ass could be paired with “sugar, spice, and everything nice,” the ingredients their father, Professor Utonium, used to create them. This sweetness was accidently mixed with Chemical X, the secret ingredient that not only gives them powers, but also gives them their unique personalities and imperfections, what makes them human and relatable. 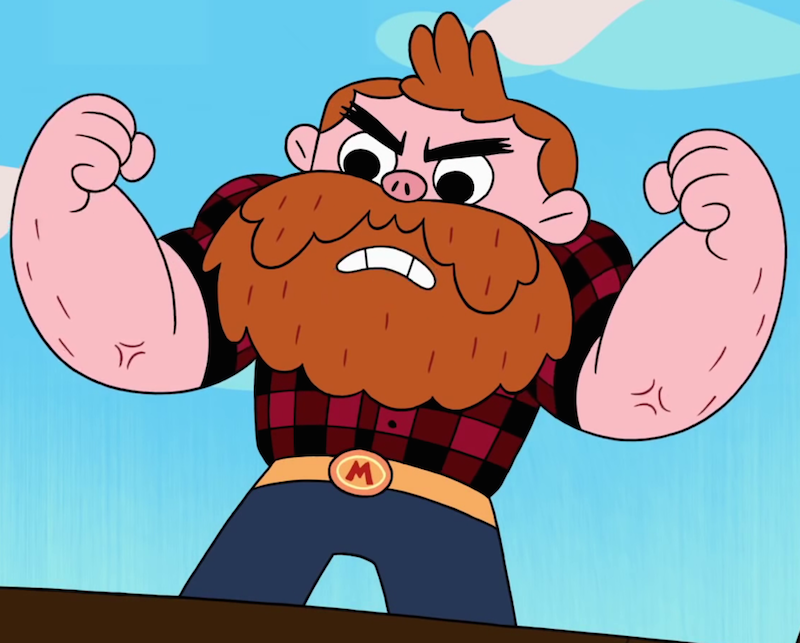 The villainous Manboy. Does he look suspiciously like anyone you know?

The show has recently returned to Cartoon Network, but unlike many other recent reboots (Fuller House, anyone?), it’s more than just monetized childhood nostalgia. The sisters have aged, and the show clearly exists in 2016. The girls and townspeople have smartphones, and there is an app to find monsters for hire in your area.

Despite the modern updates—including a great theme song by Seattle band Tacocat—the core ideas of the show are intact. More than just besting their enemies, the girls prove they can also defy the stereotypes placed on them by the older population of Townsville and its mostly male authority figures. Even in the first episode of the original series, the girls help the police (who are described as “brutish”) when they are unable to solve a crime. To simplify the show as a response to ‘90s mainstream girl power ignores the more nuanced ways that it changed animation and influenced viewers.

The humor of The Powerpuff Girls paved the way for the current wave of prestige cartoons with developed female characters and cross-generational appeal. Louise Belcher, the cunning, youngest sibling on Bob’s Burgers, could be friends with Buttercup. It’s also easy to draw a connection to Steven Universe, which centers around the Crystal Gems, alien warriors who take feminine forms and also “always save the day.”

While there was nothing like these other shows when I was growing up, I was the perfect age to be a Powerpuff Girls fan. The show went on air when I was four, and whenever I saw its signature bursting-heart background, I knew it was time to enter a world where girls could be whoever and do whatever they wanted, superpowers or not. While contemporaneous shows like Pepper Ann and The Wild Thornberrys featured female characters as leads, those characters were still subservient to their (mostly male) authority figures, be them teachers, parents, or crushes.

I was in awe of the Powerpuff Girls’ agency. They literally floated through a world that they created, one in which it made sense that elementary school students could be superheroes. The girls’ archenemies, from Mojo Jojo (the monkey villain with a humanizing origin story) to the Rowdyruff Boys (the sisters’ evil male counterparts), were foils to this equitable, peaceful universe. These villains failed to defeat the Powerpuff Girls because they underestimated them based on their age and gender. The girls, in matching dresses and with weaknesses for puppies, unicorns, and other cute things, were a femme twist on the traditional male superhero.

This agency also led to older men wanting to control them. These were the true “bad guys” of the show: not the villains who wanted to destroy the Powerpuff Girls, but the ones who wanted to take their girl power and sexualize it, commercialize it, or put it in a box, literally. In the episode “Knock It Off,” Dick Hardly, a skeezy college friend of the Professor’s, tries to market the Powerpuff Girls. Innocently, they give him Chemical X to produce cheap, knockoff Powerpuff Girls. Hardly’s “Powerpuff Girls Xtreme,” mass-produced version of Buttercup can only say “girl power.” The real Buttercup is taken aback by this appropriation of her image. She embodies girl power; she doesn’t need to prove it. 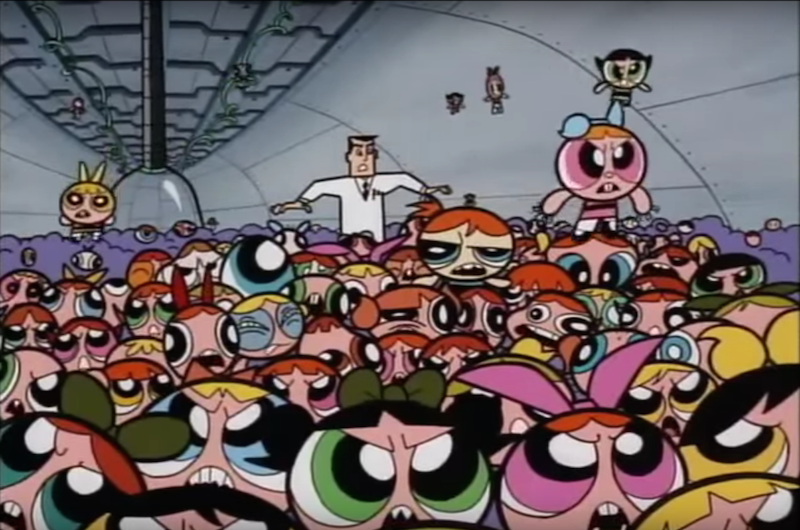 “Collect Her” is another episode with a creepy male antagonist: Obsessive comic book geek Lenny Baxter kidnaps the sisters to complete his collection of Powerpuff Girls paraphernalia. In his man cave, they become objectified trophies. Baxter’s character is a critique of cultural obsessions with young girls and shows the consequences of idolizing the Powerpuff Girls. Sure, they always save the day, but they are still humans.

Watching the new episodes, I still feel attached to the sisters, but I also appreciate how they have developed. There is also new tension between them that was almost entirely absent from the original run. In the Manboy episode, Buttercup accidently injures Bubbles and is forced to deal with how her anger affects people. In another episode, she feels alienated from her sister and joins the Derbytantes, a badass roller derby-esque skater team.

It’s these situations that executive producer Nick Jennings said were essential to making the new Powerpuff Girls people you would want to hang out with. “By developing them as stronger personalities and understanding them more as characters, we were able to write stories that are more relatable to people,” he told the L.A. Times.

Of course, these plots can quickly cross a line. The first episode of the reboot begins with the sisters bonding over their crushes on boy band Sensitive Thugz. While the scene could be seen as perpetuating stereotypes of young female fandom, when it’s superheroes having crushes, it feels almost refreshing.

The show has also invited viewers into the Powerpuff universe. A “Powerpuff Yourself” website lets you create a meme of yourself as a Powerpuff. I was amazed to see so many of my friends change their icons on social media platforms to their Powerpuff selves. I changed my Twitter photo to my glasses-wearing, camera-wielding Powerpuff. Now, I can fight the forces of evil by tweeting and discussing the issues that I care about most. I think my six-year-old self would be proud.

Once again, Bitch Media throws trans women under the bus, completely refusing to engage in the pervasive transphobia and transmisogyny of most feminist media, including--indeed, ESPECIALLY--the Powerpuff Girls reboot, which has an entire episode devoted to spouting hate against trans women.

Hi! Thanks for your comment. We published a follow-up article focusing on the transmisogynistic joke in the reboot:          A Joke in the New Powerpuff Girls Reboot is a Sucker Punch to Trans Women