Lockwood’s first two books were poetry collections, and in Priestdaddy she takes her stunning ability to twist and turn a phrase to her family life. Lockwood’s father was first a Lutheran minister with a family before becoming a Catholic priest, and a dispensation from Rome meant that Father Lockwood got to remain married and the father of three children—the eponymous Priestdaddy.

Lockwood describes her family with a genuine delight and affection for their eccentricities, embracing all that is frustrating, unexplainable, and bizarre and turning it into passages that cause convulsive laughter. I submit, as evidence, these five passages from Priestdaddy that really and truly had me laughing out loud.

1. There is always someone in a writer’s family who is funnier and more original than she is—someone for her to quote and observe, someone to dazzle and dumbfound her, someone to confuse her so much she has to look things up in the dictionary.

That would be my sister Mary, whom I worship as people used to worship the sun.

Every time I try to capture her and force her into my private zoo of description, I fail. I have, on different occasions and in different moods, described her as “a tricked-out club Chewbacca,” a “highly literate female Tarzan,” and “a jaguar who went through a human puberty.” One thing is certain: she is straight out of Nature. She speaks a made-up language largely consisting of the words “ayyyy” and “baybay” in various combinations, interspersed with nuanced and meaningful growls. She’s always wearing a tiny fur vest of some kind. If I tracked her through the woods on a snowy night, I am sure she would leave paw prints.

The first time she ever saw a T. rex skeleton in a museum, she stared at it with passionate attraction. I’m surprised she didn’t try to climb up into its rib cage and hang there as its heart. “Ayyyy,” she whispered in a voice full of emotion, “it’s just a little baybay.”

2. “What exactly do Catholics believe?”

I’d been preparing my whole life for this question, and ticked the answer off on my fingers. “First of all, blood. BLOOD. Second of all, thorns. Third of all, put dirt on your forehead. Do it right now. Fourth of all, Martin Luther was a pig in a cloak. Fifth of all, Jesus is alive, but he’s also dead, and he’s also immortal, but he’s also made of clouds, and his face is a picture of infinite peace, but he also looks like one of those men in headache commercials, because you’re causing him so much suffering whenever you cuss. He is so gentle that sheep seem like demented murderers in his presence, but also rays of sunlight shoot out of his face so hard they can kill people. In fact, they do kill people, and one day they will kill you. He has a tattoo of a daisy on his lower back and he gets his hair permed every eight weeks. He’s wearing a flowing white dress, but only because people didn’t know about jeans back then. He’s holding up two fingers because his dad won’t let him have a gun. If he lived on earth, he would have a white truck with a bumper sticker of Calvin peeing on a smaller Calvin who is not a Catholic.”

3. Some people are, through whatever mystifying means, able to make the guitar talk.

My father can’t do that, but he can do the following:

I can’t figure it out, and I think for a living. He practices mostly behind half-closed doors, so it’s possible he’s having sex with the guitar? It’s possible that somewhere out there I have a half brother who is a sweet lick from the waist down?

Alice, to everyone’s surprise, cannot get enough. She rolls on her back and flashes her claws in the air when he plays. She is blown away by the concept of sustain; the longer a note lasts, the more she purrs; it seems to stretch her actual perception of time. She wriggles with pleasure; she twists and switches her tail; she forgets to close her mouth over her thirsty pink tongue. She is dropping her panties, catwise.

4. My mother is best described in terms of her Danger Face, which is organized around the information that somewhere in America, a house is on fire.

There are human Lassies among us, who are more alert to disaster, who feel a little ding! go off in their heads whenever a child falls into a well. She is one of them, and all of humankind is her Timmy.

The only magazine she ever subscribed to was called Prevention, and it exclusively carried articles about which fruits could prevent cancer. The cover always featured a picture of a jogging young grandma in a sports bra pumping her fist in the air as she overcame any number of invisible diseases. My mother’s expression, while reading it at the kitchen table over an antioxidant-rich meal of beets and steamed carrots, called to mind Edvard Munch’s The Scream.

5. A curious panting comes outside my door.

It is my own ancestor crouched on all fours in the hallway, her hair gone mirror-colored at the crown, trying to guess whether I need to go to a restaurant or not. She believes if you don’t visit at least four restaurants a day, you die.

“But do you need a hamburger,” she whispers. 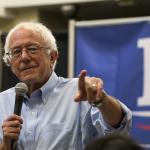 by Everett Maroon
We're supposed to have freedom of religion—but you wouldn't know that looking at the GOP candidates.