Prison Rape Is Not a Punch Line | Bitch Media

Prison Rape Is Not a Punch Line 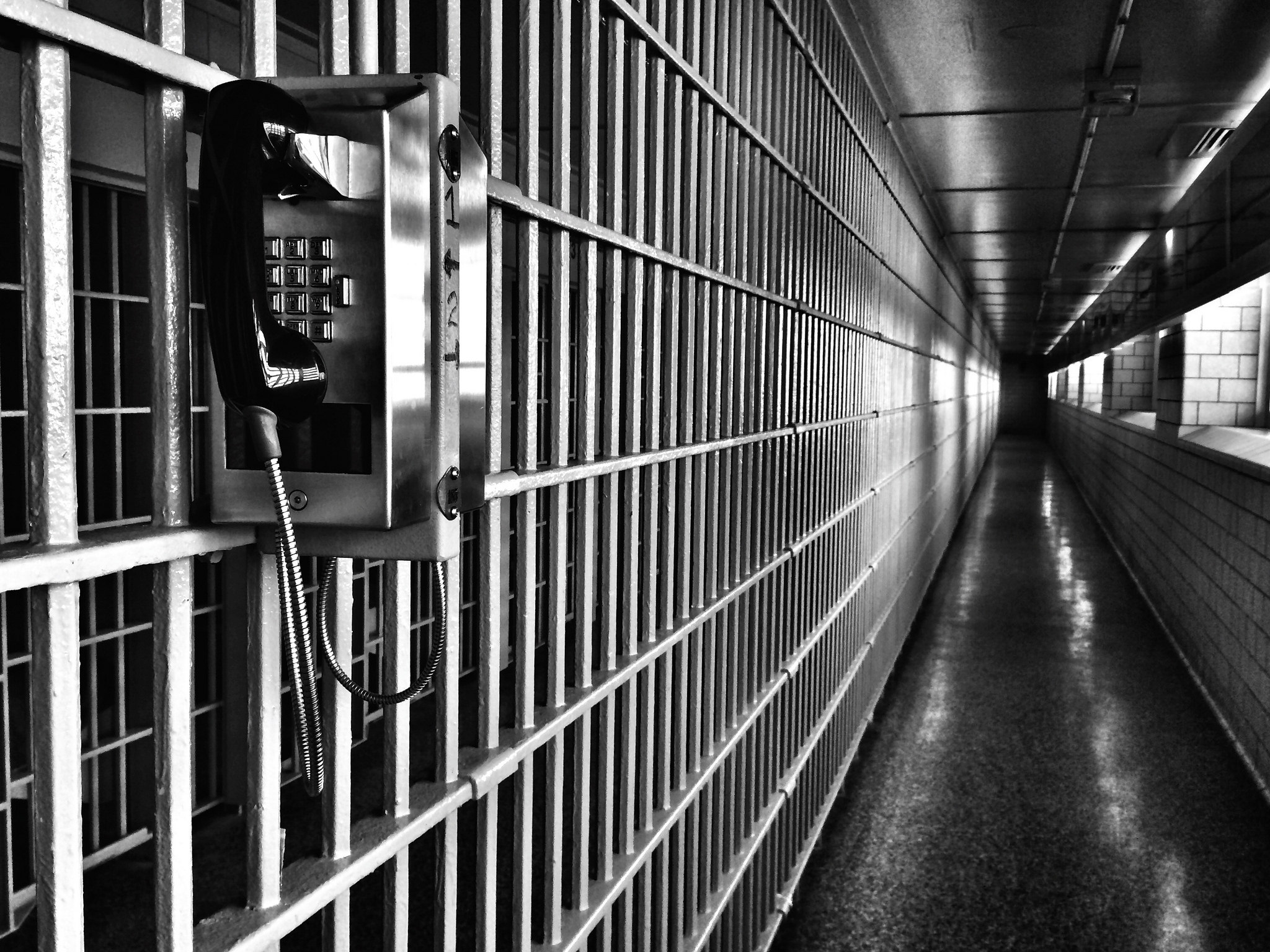 This story was originally published on February 24, 2016.

Despite the increasing awareness about the issue of sexual assault, there is still a large segment of our society whose victimization hasn’t been addressed. Every year, 200,000 people are raped in American prisons and detention centers. And in this case, we don’t even have the excuse of ignorance. Prison rape is part of our culture’s humor. “Don’t drop the soap” is a euphemism for “be on your guard.” In a (since withdrawn) 2002 TV commercial for 7-UP, the spokesman is selling his product in a prison. He drops a can of 7-UP, starts to bend over to pick it up, and then thinks better of it. “Ooo, I’m not picking that up,” he says. The commercial ends with the spokesman sitting on a cell bed next to an inmate. “When you bring the 7-UP,” he says, “everyone is your friend!” The hairy, tattooed inmate puts his arm around the spokesman, and the camera starts to move away. “Hey!” he shouts to the cameraman, “Where are you going? Come back!”

Even more disturbing, some people talk seriously about prison rape as a punishment. When convicted serial rapist and former police officer Daniel Holtzclaw was sentenced to 263 years in prison last month, an alarming number of people responded on social media with the hope that he would get raped behind bars. When hearing about convictions of despised criminals, otherwise civilized people on social media start salivating at the thought that these men will be raped in prison. These jokes and offhand comments reflect how lightly the justice system takes rape of people in prison. When prison rape is committed—either by guards or by fellow prisoners—there is usually little or no punishment. Juries who would put a man away for 20 years for raping a woman outside of prison give him a fine and a little probation for raping another man in prison. Why? Because, according to these jurors, criminals deserve to be raped.

This is unacceptable. American criminal code does not allow criminals to be sentenced to rape. No one, no matter what they’ve done in the world, deserves to be raped. In 1992, the Supreme Court ruled in Farmer v. Brennan that prisons’ deliberate indifference to the substantial risk of sexual assault violates prisoners’ rights under the Cruel and Unusual Punishments Clause of the Eighth Amendment. The situation in prisons is a gross breach of justice and human rights. And with the prevalence of HIV in the prison system, rape can turn a two-year prison term into a death sentence.

Americans and our government have largely regarded the prison system with a sort of detached horror. The attitude is that we had better leave well enough alone, because if we open up that can of worms, goodness only knows what we might find. And after all, what happens in prisons stays in prisons, right? Wrong. Ninety percent of people in prison are eventually released. What happens to prisoners affects the rest of society. Putting aside for a moment the inherent evil of allowing people to be raped and tortured in our prisons, prison rape also makes it unlikely that inmates will become productive members of society upon release. Rape often leads to PTSD, which can severely inhibit a person’s ability to hold down a job and have a functional family life.

The impact that the prison environment has on people in custody will carry into the next generation. In California, one in 10 female prisoners is pregnant, and over 300 babies are born within the walls of California prisons every year. Many incarcerated people are or soon will be parents, and their ability to care for their children may be compromised by the trauma of sexual assault. Like rape outside of prison, prison rape is a crime of power. It creates and sustains power structures that are extremely harmful to society, many of which strengthen prison gang membership. Gangs are even more common in prisons than on the streets. One study by the National Gang Crime Research Center concluded that “gangs are the dominant subculture in the entire American correctional system today.” Gang violence accounts for a quarter of all violence among inmates—25 percent of male inmates are gang members, and an estimated 11.6 percent join a gang while in prison.

Lest we think that prison gangs are contained within the penal system and do not inflict a cost on society, it is important to remember that nine out of 10 prison gangs have counterparts on the streets. Particularly alarming is the growing number of white supremacist gangs in prisons. The number of correctional facilities with such gangs rose from 27.3 percent in 1991 to 72.3 percent in 2004. Racial tension in prisons is always high, but the added element of sexual violence increases tension and prejudice enormously. According to the Bureau of Justice Statistics’ report on Sexual Violence Reported by Correctional Authorities, more than half of inmate-on-inmate sexual violence is interracial. In response to the threat of interracial violence, racially charged gangs develop. As one white incarcerated person told Human Rights Watch: “I hate to say this but if you weren’t racist when you came to prison more than likely you will be when you leave. In Texas prisons race is the main issue and until people wake up and realize that, nothing will change!”

Prison rape also perpetuates homophobia and hatred of trans people. Although men who rape other men in prison overwhelmingly identify as staunchly heterosexual, sexual orientation nonetheless plays a large role in perception of rape in prison. The myth of the “homosexual predator” allows homophobes to use prison rape to paint gay men as dangerous sociopaths. In the prison environment itself, men who are gay or perceived to be gay are targeted by other prisoners for sexual violence. In a recent Black and Pink survey of 950 LGBTQ people in prison, 12 percent of respondents said they had been sexually assaulted by staff. Far too often, the “solution” to sexual violence in prison is to transfer the victimized person into solitary confinement—85 percent of queer people surveyed in prison said they had spent time in solitary. 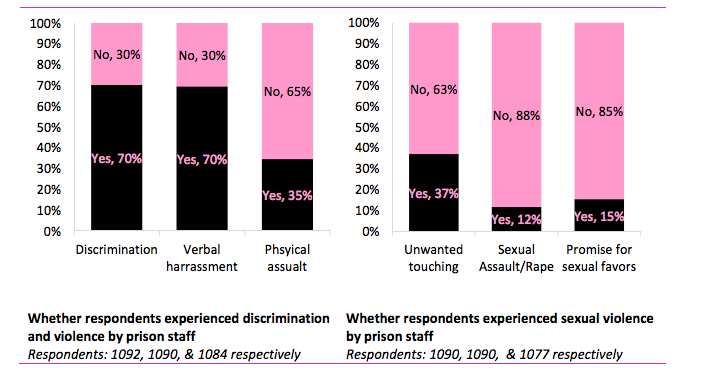 Statistics on harassment and assault of queer people in prison from a report by Black & Pink.

Prison rape is also a huge issue for women in the prison system. Especially in local jails, guard-on-inmate rape often takes the form of male guards sexually exploiting female inmates. If a prisoner refuses a guard’s advances or attempts to report the abuse, he can write her up for misconduct, take away telephone and visitation privileges, or put her in solitary confinement. He can even increase her sentence by as much as a year. And in federal women’s prisons, 70 percent of the guards are male.

We don’t just need to stop joking about rape in prison, though that will certainly help. We need to take steps to uncover it wherever it happens and prosecute it to the full extent of the law. And that is just not happening right now. The number of prisoners who report rape anonymously to researchers are much higher than the numbers that prison officials are reporting. Even when prison rape cases are reported, prosecutors often refuse to take these cases. In fact, the Detroit county prosecutor actually stated that she would reject all prison cases. We desperately need to open avenues for prison rape to be reported, investigated, and prosecuted.

As a first step, we need to repeal the Prison Litigation Reform Act, which makes it nearly impossible for prisoners to file criminal charges. The act requires that prisoners exhaust all possible administrative options (many of which are guarded by the very people who assaulted them), raises the cost of litigation, and forbids prisoners to file charges a fourth time if their charges have been rejected three times. Taking prison rape seriously also means thinking carefully about the implications of legislation that increases the prison population. For example, “tough on crime” Republicans constantly introduce legislation that would tremendously increase the number of crimes for which juveniles may be tried as adults, including “gang-related” drug offenses. Their argument that the increase in gang membership and level of gang violence necessitates drastic action. But given the facts about prison rape, it is clear that such legislation would be dangerously counterproductive.

At the very least, youth are more likely to join violent gangs in prison than on the streets. And as if this weren’t enough to show the policy to be foolish, children tried as adults and subsequently placed in adult prisons are five times more likely to be sexually assaulted than children placed in juvenile halls. This means they are roughly five times more likely to become dysfunctional members of society. Research has also shown that sentencing children to adult prisons is simply not effective. The threat of punishment in the adult correctional system has no deterrent effect on juvenile crime. In fact, incarcerating juvenile offenders in adult prisons actually increases the likelihood that they will commit further crimes.

By placing more and more people in a dangerous prison system, “tough on crime” policies benefit no one. The only group that benefits are privately run prison companies and their lobbyists. If we really want our streets to be safer, we need to scrap the “tough on crime” mentality and go another route. We need to take positive steps that will immediately reduce the number of people in jail, and change the justice system where no one sees rape as inevitable or acceptable. 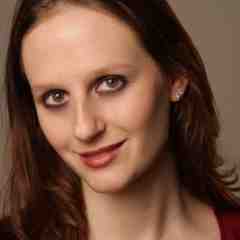 Relevant: Male Rape is No Joke—But Pop Culture Often Treats It That Way