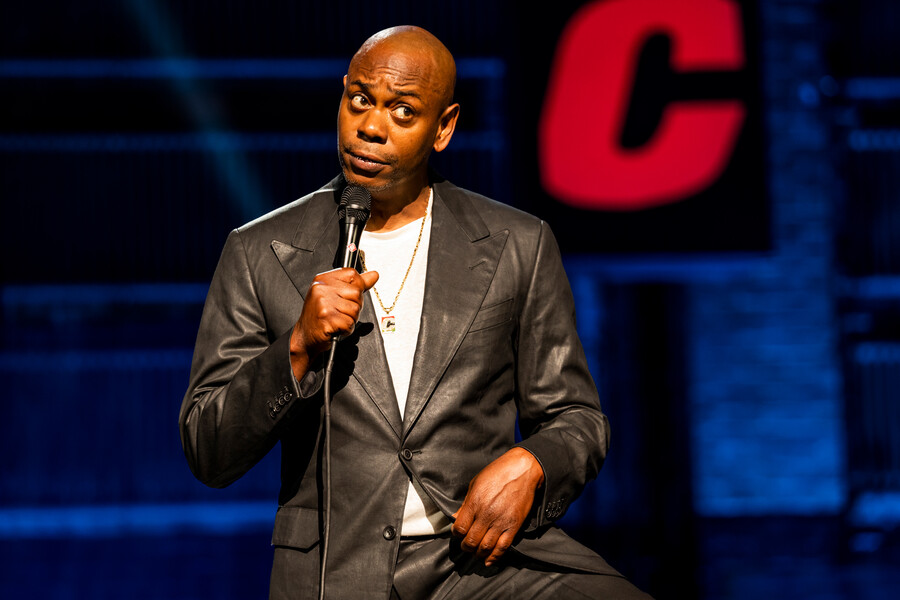 Dave Chappelle‘s latest stand-up comedy special, The Closer, debuted last week on Netflix, and in it, Chappelle continues to highlight his cis-heteronormative lack of understanding of the LGBTQ+ community, with jokes aimed at making trans people his punch line. Chappelle’s thoughts and ideas are, in his own words, “controversial,” and he spends much of his 62-minute set making jokes at the expense of LGBTQ+ people, declaring himself a “TERF,” and moaning about cancellation. Near the end of the routine, he tries to exonerate himself and avoid any ill will by sharing a story about his friend and fellow comic Daphne Dorman—who, before her death by suicide in 2019, defended Chappelle against charges of transphobia on Twitter. In what comes across as Chappelle’s version of a white person’s “I have Black friends” defense, he recalls a conversation in which Dorman emphasized simply that she needed him to believe that she was “having a human experience.” But capping off his own vitriol and literal lack of recognition of human experience with this anecdote does little to absolve him.

It’s hard to fully conceptualize Chappelle’s ongoing failure to understand his own privilege and platform. As a Black man—one who still faces the same targeted violence that trans people face every day—he has clearly chosen not to understand that, for instance, trans violence is higher now than it has ever been, with 2021 set to be the deadliest and most dangerous year ever. And while comedians often use concepts like “freedom of speech” and “being provocative” to justify their insensitive bits, Chappelle has both the intelligence and the lived experience to understand that words can, and often do, result in real-world violence.

So why bother to write anything about it, considering that I’m just one among many people frustrated by Chappelle? The Closer isn’t even the first Netflix special in which he’s targeted trans people in the name of “comedy” and “freedom of expression”; indeed, every new one brings a predictable back-and-forth of defense and criticism. But I think there’s more to unpack here than either the discourse or the inherent harm that results from his tired jokes.

Webster’s Dictionary defines the word “complicit” as “the state of being involved with others’ illegal activity or wrongdoing.” Similar words are “collusion,” “collaboration,” and, my favorite, “abetment.” And though many people have pointed out Chappelle’s complicity in anti-trans rhetoric, I have rarely heard mention of Netflix, the company that keeps green-lighting and promoting Chappelle’s comedy specials and defending them against the ensuing criticism. In his statement about The Closer, Netflix co-CEO Ted Sarandos said, “We don’t allow titles on Netflix that are designed to incite hate or violence, and we don’t believe The Closer crosses that line. I recognize, however, that distinguishing between commentary and harm is hard.” Suggesting that Chappelle’s comments in The Closer are difficult to judge is disingenuous. And that is complicity.

One would hope that Netflix, whose offerings and original content include multiple movies and shows with queer themes, queer actors, queer showrunners, and even a Twitter handle, @most, the “home of Netflix’s LGBTQ+ storytelling,” might think twice about how Chappelle’s comedy intentionally denigrates much of its audience. It seems, however, that “controversial” takes on the LGBTQ+ community outweigh concerns about alienating viewers. Netflix wants to have it both ways: It wants LGBTQ+ viewers, and it wants viewers of The Closer, who can laugh at trans jokes without flinching.

The most frustrating thing to me in all of this is the knowlege that multiple people across different departments at Netflix reviewed The Closer before its premiere and apparently not one person with any power stopped to say, “Hey, I don’t think this is okay.” This same person, who probably understands racism, sexism or even ageism when they see it, failed to believe that not putting more transphobia out into the world should be a priority for Netflix. What this tells me about Netflix is that dollars outweigh the need for equity and, more importantly, that the company doesn’t have any valued LGBTQ+ voices at the executive table, and so needs to hire more LGBTQ+ people as a whole.

And while companies like Netflix promote and profit from dangerous and dehumanizing transphobic content, trans women still have to debate people on their right to live. It would be easy for me to write that Dave Chappelle should be cancelled, or to call on people to cancel their Netflix subscriptions, but I don’t think either of those reactions will actually solve this problem.

It’s not enough for GLAAD to condemn Chappelle. People must stop being bystanders, or giving folks “grace” because of their talent or because “art is subjective.” None of this stuff is theoretical, or simply a matter of opinion. I don’t expect Chappelle or anyone over at Netflix to become a Gender Studies instructor overnight, but when the comic launches into a long discussion on the topic “what is a woman?” in a “comedy” special he is, in effect, positioning himself as someone with authority to speak on the topic. Suggesting that it’s complicated to discern what his words mean, or if they might result in violence, is in fact justifying and condoning the eradication of trans individuals.

While companies like Netflix promote and profit from dangerous and dehumanizing transphobic content, trans women still have to debate people on their right to live.

It’s important that LGBTQ+ artists who work or have worked with Netflix in the past make statements in these situations: Terra Field, a software engineer at Netflix, put the issue neatly when she tweeted that trans people are not “offended” by Chappelle, but are pointing out the “harm that content like this does to the trans community (especially trans people of color) and VERY specifically Black trans women.” She goes on to note that the streaming platform’s choice to amplify Chappelle’s vocal alignment with TERF ideology “is not some neutral act,” writing “This is not an argument with two sides. It is an argument with trans people who want to be alive and people who don’t want us to be.” (Field was suspended from, and then reinstated, in the past several days.)

It’s also important for people like Dear White People showrunner Jaclyn Moore, who have experienced violence at the hands of cisgender people for wanting to exist authentically, to put their livelihoods on the line in the pursuit of justice, as Moore did when she announced she would no longer work with Netflix on Dear White People. This was unlikely an easy decision for Moore, as it’s one that could impact her ability to make a living; and it highlights the fact that it shouldn’t only be trans creators shouldering the burden of responsibility. Without Netflix’s financial backing and massive distribution reach, Chappelle’s message in The Closer—a special that seems obsessively focused on LGBTQ+ people—would have reached a much smaller audience. It is Netflix that allows Chappelle’s harmful words to command days of news coverage, and that continues to suggest that the right of trans people to exist is up for debate. Netflix’s seal of approval should be the target of criticism now.

For folks like myself who are non-binary, the problem is not just the fact that people with the least understanding of gender identity always seem to have the most to say about it. It’s 2021, and we still have to remind people that all oppression is connected. People like Chappelle, who could easily educate themselves, continue to further the rhetoric that trans women aren’t women, that their existence is still up for debate—which actually does leave them having to fight for their existence, for their right to live.

Chappelle himself, in The Closer, balks at the charge, made by a trans woman years ago, that he is “punching down” in his comedy. He pushes back against this idea stubbornly, but his insistence suggests that he still believes this is simply a question of words. He underlines this comprehension gap when he says “trans women make up words to win arguments.” As noted by Abhijato Sensarma, there is a difference between joking about the powerful and joking about the powerless, noting that every time we laugh at “someone from a marginalized group, we must examine our own biases.” In the case of Chappelle’s routine, what’s laughable is the lack of empathy evident in both the network and the comedian, and the way that the latter’s jokes are rooted in privilege—the privilege to write off the oppression that trans people face as a “lack of understanding.” Chappelle relentlessly punches down and not only refuses to acknowledge it, but also demands that his audience applaud his supposedly principled stance.

Ultimately, The Closer says a lot about the culture of Netflix, and about America as a whole. After years of opportunities to find understanding, these institutions have instead chosen to continue profiting off their own ignorance and lack of empathy. It is my hope that one day, the same people who gave The Closer a huge audience, or clapped along, will stand up for trans lives. Until then, those of us who fight should continue to punch up at the powerful decisionmakers who provide platforms to the ignorant.

Read this Next: One-Inch Barrier 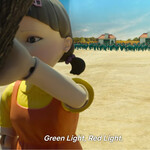