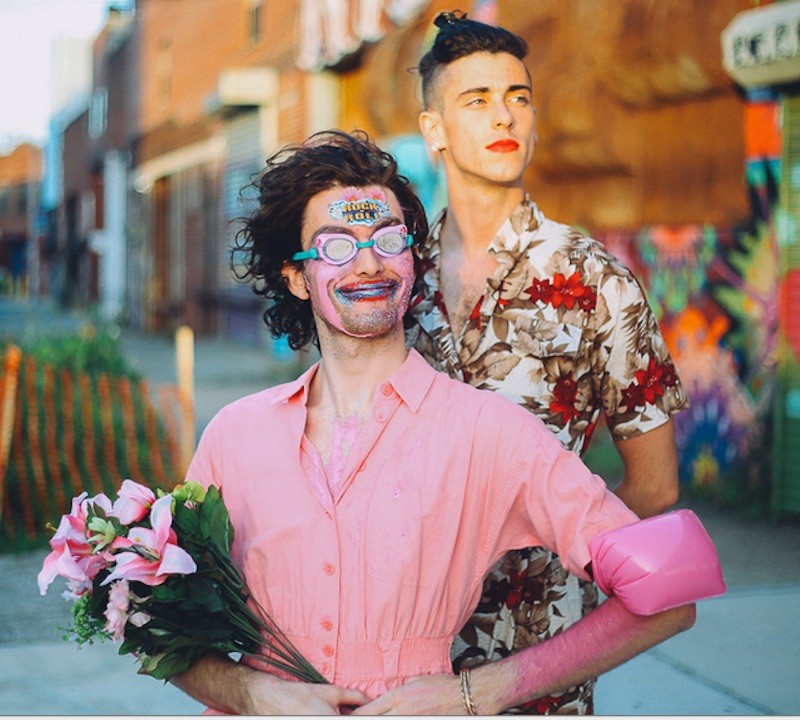 The first time I experienced the band PWR BTTM was at a show in Portland in early January. The opening band had just had their gear stolen, and their rented instruments were failing them throughout their set, so PWR BTTM’s Ben Hopkins—tall, lanky, dressed in a floor-length gown, their stubble smeared with glitter—came on stage and handed the band their own rhinestone-studded guitar. “These are just some nice straight boys from Seattle,” Hopkins told the crowd. “Be nice to them.”

PWR BTTM’s debut album, Ugly Cherries, was released in 2015 and quickly won fans—it’s a tightly packed glitter bomb that explodes in bright, catchy guitar riffs and queer-as-fuck lyrics. PWR BTTM consists of Hopkins and Liv Bruce, and though they now live in Brooklyn, they met while they were students at Bard College; Hopkins studied theater and Bruce studied dance. The band is about to headline their first big tour this fall.

Both Hopkins and Bruce use they/them pronouns, and their songs are forthright with questions of gender and sexuality. “Sometimes I have to remind myself that I don’t need to ask if a song is queer enough,” Bruce told me after a show in Portland earlier this month. “That aspect of my experience will sneak its way into most of what I write, if not all of what I write, just by virtue of it being there. I don’t have to be super explicit about it in every song. Although, those songs work too.”

On the album’s title track, Hopkins addresses the pain that comes from realizing you’re different from how you’re told you “should” be. “I just got so fucking tired of wishing I was different so I decided to scream, ‘She’s all right’ until I actually was,” Hopkins told SPIN about the song. On “Serving Goffman”—the title of which is a pun on Erving Goffman, a sociologist who wrote about performativity and self-presentation—Bruce wrestles against societal gender constrictions, singing, “I held my breath in a suit and a tie/ Because I didn’t know I could fight back/ I want to put the whole world in drag/ But I’m starting to realize it’s already like that.”

Both Bruce and Hopkins considered their performance styles to be more tied to drag when they started PWR BTTM, but that has changed in the last couple of years. Bruce says figuring out their own nonbinary gender identity helped them realize they’d lost their investment in drag as a performance style. Hopkins’s relationship with drag has gotten more complicated too, and they say they’re now more interested in adopting drag’s signifiers—like the gobs of glitter Hopkins pastes on before shows—than in actually performing in drag.

Now, says Hopkins, the band goes for a “midnight movie” aesthetic. “If you know about it, you’re included, and even if you don’t know about the rituals that are involved, that’s okay; you can just be a part of it. You don’t have to be anything or look like anything. You don’t even have to dress up.” That community aspect is what drew Hopkins to drag in the first place, but there can be a quest for perfection in drag communities that doesn’t appeal to everyone, they say. “There’s this elitism in drag, like, [if] you don’t look like this… you’re not a good drag queen; you’re a booger queen. I want to look like a booger queen because that’s easy and everyone can do it.”

This celebration of imperfection and wiggle room perfectly aligns with another major idea that weaves its way through their music: the idea of space. While it may not be found between the notes of their quick-moving riffs, so much of their lyrics and their politics have to do with finding and taking up and feeling comfortable in your own space. A great example is “Dairy Queen,” on which Bruce sings, “We can drink our beer out of a sippy cup/ We can go to Disney World and fuck shit up/ But right now/ I’m in the shower.” The song is the definition of a romp—it’s hard not to picture a queer romance full of holding hands, skipping, and eating Oreo Blizzards when you listen to it. But while it basks in lovey-dovey emotions, it maintains that self-care and self-reflection and alone time are always important, even (perhaps especially) when you’re wild about someone.

Space is an important political issue for them, too. The band requests venues to make bathrooms gender-neutral at all of their shows, and when they take the stage, they ask audiences not to mosh to respect people’s bodies. As far as institutional change is concerned, “There’s nothing that we can do on our own as a band,” Bruce says, “but we can create space for other people to make changes in their daily lives and in their communities,” an idea they make sure they say is heavily inspired by Angela Davis’s Abolition Democracy.

The struggle between self-acceptance and acceptance from the outside world drives their new single, “Projection.” The song is a bonus track on the upcoming U.K. release of Ugly Cherries. According to the band’s Instagram, the song is about “being exhausted with the pressure of fitting in and throwing a shiny, glorious middle finger to those who doubt you.”

As the lights dimmed at their Portland show earlier this month, and the first band prepared to take the stage, the person next to me—decked in sequins, a pink satin skirt, glittery sandals, and a shiny pink unicorn-shaped bag—offered me their extra set of fluorescent orange earplugs. The gesture was small, though kind, but it represented PWR BTTM’s entire ethos: We’re here, asking questions, helping ourselves and each other feel more comfortable. In a world like ours, simply living a queer life authentically, making space for yourself and others like (and unlike) you, is oftentimes the most important, most radical thing you can do.

This article introduced me to PWR BTTM. I saw them in Seattle last weekend, and it changed my life. So much fun, so queer, so trans, so funny, so amazing. Thanks, Bitch magazine. <3 <3