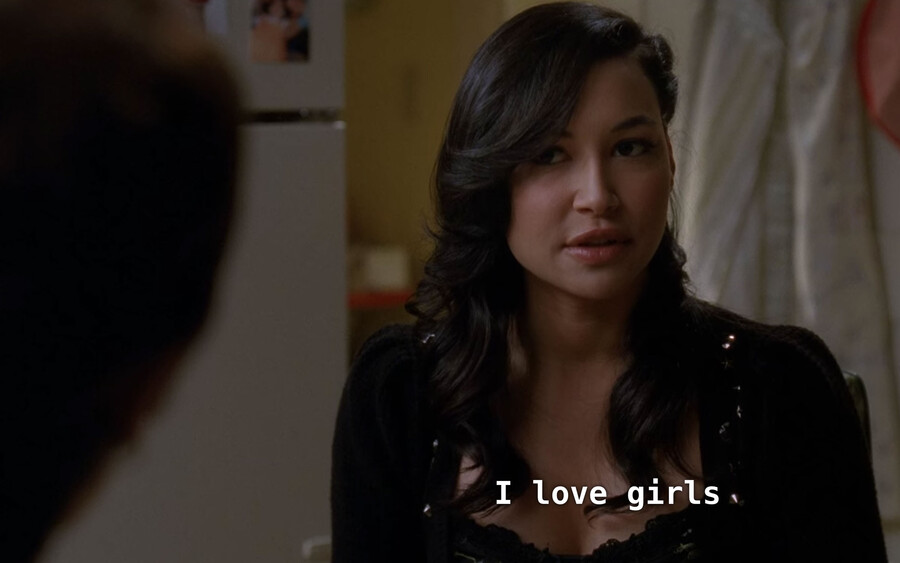 When I first began watching Glee, a Ryan Murphy-created musical dramedy that follows the various members of a high school glee club, as a teenager, I thought I most related to Santana Lopez (Naya Rivera) because we’re both Latinx. Though I knew I liked girls, and I’d even come out as bisexual to a few close friends, I didn’t think I was that gay—certainly not gay like Lopez. Instead, I attributed my obsessing over Brittanna (the ship name for Lopez and fellow glee member Brittany Pierce, played by Heather Morris), watching fan-created videos, and searching for photos of Lopez on Tumblr to my excitement at seeing another Latinx femme on television. When I began watching Glee even more closely in college and I started to realize that I was in fact gay like Lopez, I started to see my connection to her character through a new lens.

Lopez offered me something I never had before: an accurate and emotionally honest representation of the layered, complex, and emotional experiences that so many queer Latinx teens endure. Rivera never portrayed a single facet of her character’s identity. Lopez wasn’t just gay or just Latinx; she was a complete Afro-Latinx person, with everything those multiplicative identites encompass. Rivera’s complicated and nuanced performance of a character that could have and almost did lean solely on stereotypes and fetishization allowed thousands of queer Latinx youth to see themselves accurately on television for the first time and feel less alone. It’s even more impactful that the show’s writers and Rivera honored all of Lopez’s identities given the white queer community’s desire to center and separate queerness from race and ethnicity.

In the days since Rivera tragically died in an accidental drowning, I and many others have been thinking heavily about the significance of seeing someone who looked and lived like us on television. Due in part to the deeply rooted Christian beliefs in many Latinx cultures, homophobia within the Latinx community remains common even today, and yet there has been minimal representation of this unique experience on television. A 2007 study by the Pew Hispanic Center and Pew Forum on Religion & Public Life found that more than two-thirds of Latinx people identify as Roman Catholics; this number fell to 55 percent in 2014. These inextricable Catholic values, coupled with the patriarchal machismo culture, has contributed to high rates of homophobia within Latinx communities and families.

According to a 2012 survey by the Human Rights Campaign, family acceptance is the primary concern among LGBTQ Latinx youth, which is an issue I and so many other queer Latinx folks know all too well. The survey also found that less than half of LGBTQ Latinx youth have an adult in their family they can turn to if they are feeling worried or sad, compared to eight in 10 of their non-LGBTQ Latinx peers. That’s the reason Lopez’s breathtaking coming-out experience has been so impactful for so many queer, Latinx viewers. I remember watching the scene when Lopez comes out to her abuela, Alma Lopez (Ivonne Coll), in Glee’s third season. Alma tells Lopez that “some secrets are best kept as secrets” before kicking her out of their house. In that moment, I felt Lopez’s pain and rejection.

This scene served as testament to the complexity that Rivera brought to this character. She didn’t treat her abuela like a villain in this scene or the scenes following; instead, she started to learn how to balance her queerness and her culture in ways that honored both experiences. Since Glee ended in 2015, there’s been a steady increase in the number of queer, Latinx characters on television. In 2019, there were 62 Latinx LGBTQ characters across broadcast networks, cable networks, and streaming platforms. Shows like Brooklyn Nine-Nine, Vida, Pose, and One Day at a Time tell unique stories about queer Latinx people that have been as impactful for queer teens as Rivera was for us.

When Lopez told her grandmother that she liked girls, and her grandmother rejected her, I sobbed for hours. Lopez’s realization, fear, and rejection resonated so deeply with me that I couldn’t contain any of my anger or sadness. Glee’s writing wasn’t great, but before watching the show, I hadn’t seen a Latinx person onscreen having similar experiences. I spent most of my childhood hearing my family whisper negatively about LGBTQ people. Even the “progressive” ones would say things like, “I like them, but I wouldn’t want my kids to be that way.” Even though I’d known I liked multiple genders for a long time, I always pretended that I didn’t. Rivera was the first time I saw a queer woman on television. Lopez validated me, and that character helped lead me out of the closet.

I was in the eighth grade when Glee aired Lopez’s [coming out] storyline. I was beginning my own sexuality journey at the time. It was really exciting and scary to see another Black and Puerto Rican person coming to terms with their lesbian identity at the same time as me, especially because she’s from a religious family. Her confusion and anger and also her eventual ownership of and confidence in her identity were so relatable and powerful to me. Though I no longer identify as a lesbian (I identify as queer now), I still love her character. Glee has many problems with its portrayals of queerness, queer people, and relationships, but Lopez’s storyline and also the vulnerability and multidimensionality Rivera portrayed still sticks with me. Rivera was also one of the people who inspired me to become an actor and showed me that it was a possibility.

I didn’t know how big of an impact Lopez had on me until my early adult years. I watched Glee when I was in eighth grade, and I was lucky enough to have some queer Latinx representation in my life. But Lopez validated queer Latinx people in a different way. She made everything [about queerness] seem permanent—something that could be lived out fully into adulthood—rather than some youthful experimental phase. Though Lopez wasn’t the sole queer Latinx representation in my life, she was a welcome addition to all the other wonderful real-life examples I had in school. I know that her onscreen relationships also have a deeper meaning for people like my girlfriend who, like the wide majority of queer people, didn’t have a community among their peers.

“Naya Rivera was the first time I saw my first a queer woman on television. Santana Lopez validated me, and helped lead me out of the closet.”

Lopeza’s coming out storyline came in the heart of my high school days when I was really struggling to grasp my newfound queer identity. There weren’t really many queer women on TV, much less femme or Latina characters. For the majority of my time in high school, I found that I really resonated with closeted Lopez who feared letting anyone into this part of her life. It sounds cliché, but watching her character made me feel less alone in the closet. I remember watching the [coming out] scene over and over again and admiring her courage for doing something I could never even dream of doing. I also remember crying when it didn’t have a positive outcome. Regardless, Lopez kept living her life, and it made me want to keep living mine. Many seasons later her abuela does finally come around, so for me, that gave me some hope about my own family—maybe time does heal all wounds. Lopez was the first queer female I saw on TV, so her character was groundbreaking for me. Maybe it was because I was going through what her character was going through at the same time, or maybe her experience just seemed[so realistic.

Glee was the only piece of pop culture that featured queer people that felt acceptable when I was in school—everyone watched it, loved it, and cheerfully avoided discussing the queer characters. It was also the only show I’d seen with a queer Latinx character. When I was in middle school, I didn’t know exactly why I loved Lopez, but I obsessively read recaps of the show to know when she and Pierce had scenes and then find the scenes online. Rivera worked to make sure her portrayal of Lopezwas true and worked to honor her queer fans. This might sound silly, but I don’t think I’ve ever seen a queer character played with such deliberate care by a straight person. And Rivera, as an Afro-Latinx person, worked hard to keep her portrayal true to our community, like when she came out to her grandmother. Seeing that on primetime television was an unmatched experience.

I struggled with labeling my sexuality in high school. Not being able to be honest with those around me led to me becoming resentful of those who were out. I even accidentally outed a couple at my school because I was too filled with internalized homophobia to grasp the repercussions of my actions. The scene where Finn (Cory Monteith) outs Lopez a in the hallway, and, subsequently, when Lopez’s abuela kicks her out led me to understand how my actions hurt that couple at my school and how real and dangerous internalized homophobia is. Now, as I rewatch Glee as an adult who has come to terms with her identity as a lesbian and is actively doing the work of unlearning the deep-seated internalized homophobia from my childhood, I’m able to better understand Lopez. I’ve always loved Lopez’s biting remarks and how vulnerable she learned to be, but now I see her sassy nature as more than that: It was a means of survival.

Read this Next: Be About It 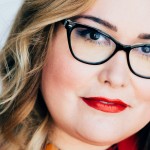 by Ruby Mora
Right now, there are four shows on television that have a Latinx gaze.