Queers on the Run | Bitch Media

Queers on the RunAn interview with Eric Stanley and Chris Vargas 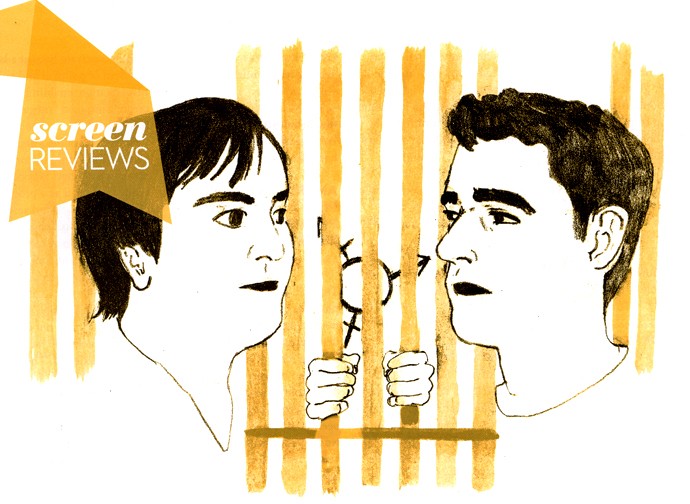 Filmmakers Eric Stanley and Chris Vargas met at the University of California, Santa Cruz, in 2005 in a class on film, video, and gender where Stanley was the teaching assistant and Vargas a student. Both were radical activists on issues of prison abolition, queer antiassimilation, and trans justice, and both were heavily influenced by revolutionary feminist and political films like Lizzie Borden's Born in Flames and Gillo Pontecorvo's 1966 The Battle of Algiers. Naturally, it wasn't long before the two began collaborating—their first film, Homotopia, was released in 2006.

The 26-minute film had a simple plot but a substantive critique. Main character Yoshi hooks up with a cute stranger in a park bathroom for a hot sexual encounter, followed by a long conversation. Enamored of his new fling, Yoshi sets out to see him again, only to find the man sitting at a café table, making arrangements for his big gay wedding. Crushed at having been taken in by the very kind of gay man he despises and horrified at the thought of yet another moment of assimilationist politics taking shape, Yoshi and his friends plan a queer takeover of the impending nuptials, their conversations abounding with trenchant zingers. Walking down the streets of San Francisco, one friend wonders if gay marriage isn't sometimes justified: “What about people who get married for health benefits and stuff?” Another replies, “Why should only married people be allowed to live?”

The film reflected Stanley and Vargas's disillusionment with the recent concerns of gays and lesbians in the political sphere. Gone are the days when queers actively and openly resisted heteronormativity; gone are the many prisoner-solidarity projects that Regina Kunzel describes in her 2008 book Criminal Intimacy: Prison and the Uneven History of Modern American Sexuality; gone is the grassroots fervor of past queer organizations like Gay Liberation Front and ACT UP that militated against state invasions of queer lives and politics. In their place are groups like Human Rights Campaign and the National Gay and Lesbian Task Force, who actively set about courting D.C. politicians on same-sex marriage. Instead of arguing that everyone needs health care, mainstream gays and lesbians are now insisting that an unfair system should be extended to include them.

And the emphasis on marriage is accompanied by support for hate-crimes legislation. Where they once saw the prison-industrial complex (PIC) as the problem, given how they were blatantly targeted by it for “deviancy,” mainstream gay and lesbian activists today often agitate to put more of their fellow citizens in jail. Vargas and Stanley, like many queer radicals, share a suspicion of the PIC and its encroachment upon all aspects of American life, in particular the way the bodies of trans and female sex workers that do not fit requirements of “normalcy” are violated by the state.

The new film Criminal Queers is the pair's second attempt to confront the rapid mainstreaming of gay politics. Along with a bevy of radical and enthusiastic friends and lovers, they've made a sequel to Homotopia that finds the wedding crashers on the run. One of them, Lucy Parsons, languishes in jail after being denied bail, her gender identity—while she claims female pronouns, her state identity card marks her as male—throwing the state into confusion. Drawing upon the same visual repertoire as Homotopia, Criminal Queers is a mixture of satire and political critique, wrapped up in a classic prison-break narrative. The presence of perhaps the most famous prison abolitionist of our time, Angela Davis, lends weight to the film's rumination on the prison-industrial complex.

Yasmin Nair caught up with Stanley and Vargas to talk about the PIC, the HRC, and feminist film in a genderqueer world.

Had you always planned to make a sequel to Homotopia?

Eric Stanley: Touring with Homotopia, we were reminded of the need for radical queer film. We kept running into people who would either say, “I never thought about the prison-industrial complex/the gay movement in that way” or “I thought I was the only one who thought this way.” That really inspired us to continue our work.

Chris Vargas: Yes, and more critical positions like ours get silenced and/or eclipsed in the overwhelming visibility of gay politics around issues like marriage and the military.

How does the film's style fit with your critique of the prison-industrial complex?

CV: Queer and transgender people of color have been disproportionately targeted by the PIC. The politics of prison abolition is not new, but the emphasis on incarceration is so culturally pervasive that it is hard to talk about dismantling prisons without getting people anxious that a killer will knock down their door if prisons don't exist. That's where our diy and camp aesthetic works in our favor. The movie, I hope, is so ridiculous and entertaining to watch that even if the ideas we present are radical, they can be digested, examined, and talked about without force or intimidation.

ES: We wanted to entertain, instigate, educate, and include the voices of people that had spent time in prison and jails. Angela [Davis] has been active in prison abolition for the last 40 years, and the specific insight she offers is almost unmatched. Her scene is a bit dialogue-heavy, but [it's] an interesting contrast to the visual mayhem of many of the other scenes.

CV: Her presence gives legitimacy to the message of abolition. People that hold radical politics run the risk of being dismissed and condescended to, but there is no dismissing Angela.

Criminal Queers makes deliberate connections between the mainstream gay movement and the expansion of the PIC.

CV: We point out that Matt Foreman, the former executive director of the NGLTF, was for 10 years a prison administrator at Rikers Island—that serves as a great clue that these liberal gay agendas may be in direct opposition to the safety of the most vulnerable segment of our lgbt community, mainly poor people and people of color.

ES: When we toured with Homotopia, people would ask us, “If gay marriage isn't the fight we should be fighting, what should we be doing?” Working toward the abolition of prisons seems to be a good start.

You don't generally show your films at festivals. Why?

ES: Queer film festivals don't offer much of the cinematic experience. They're also self-contained, aesthetically and politically. Our films are disruptive of what has become a standard queer aesthetic; we don't see them fitting into standard “queer cinema.” I mean, every standard gay film out there has the words “equality,” “freedom,” or “marriage” in its title, and a plot [about] gays and lesbians fighting against all odds to [gain] acceptance/adopt a baby/enter and win The Amazing Race. I'm thinking of films like Freedom to Marry or the more recent Swedish film Patrik 1.5. We once had someone come up to us after a screening and say, “I thought I was going to see another coming-out film.” [Laughs.] We believe in the context of the entire performance of the film, which includes us presenting it and initiating discussions of the film and its issues. We could YouTube it or just send out our dvds. Instead, we create a situation where the screening is just one iteration of the film.

Radical queers haven't yet figured out how to use film as politics; we've done it with performance and spoken word, but not with film. The assimilationists are winning the war because they've learned how to use film as propaganda by wrapping their message in the preferred discourse of civil rights.

Criminal Queers abounds with gender transgression. Lucy, for instance, makes no attempt to hide the fact that she has a male body, even as she insists on using female pronouns. How do you connect gender insurrection and the PIC?

CV: We show a complete disregard for passing, in order to play with and throw off track the audience's expectation of what particular identities—trans, lesbian, gay—look like. Gender self-determination plays a huge part in the politics represented in Criminal Queers, which holds the real PIC accountable to its threats against all individuals and communities who exist outside of dominant ideologies and identities.

How would you link Criminal Queers to feminist film?

ES: Queer politics and feminist politics are inseparable. When I think of feminism historically, I think of a nuanced understanding of gender and gender roles and an interrogation of them. But the lesbi-gay movement today is so bent on policing gender identity and representation—we've got lesbian bars and festivals kicking out trans people, for instance, and the same is true of gay bars. And then there's the prescriptive gender coding that's prevalent in the mainstream trans community, where everybody has to “look” perfectly like their newly assigned gender. On a larger level, we have to think about and account for all the ways lgbt movements reproduce dominant frameworks.

If you look closely at the HRC scene [in the film], you'll see a copy of anti-trans “feminist” Janice Raymond's infamous book, The Transsexual Empire. We are not interested in the debate over whether or not Raymond is a feminist, but rather in showing how her transphobic politics align with [those] of the HRC. HRC, in 2007, supported the Employment Non-Discrimination Act (ENDA) even though it specifically excluded gender identity. We don't necessarily think ENDA is the best solution to discrimination, given that it mostly protects people in the middle-class job sector and won't do a thing for, for instance, sex workers. But it says a lot that HRC was willing to be so blatantly exclusionary about trans bodies. We try to make hypervisible the connections that people don't always see.

How did you access the public spaces featured in Criminal Queers, given your resources?

CV: We generally shoot on the fly since we can't pay to rent locations, and we've had some luck with that. But in this movie we had quadruple the locations, and therefore more opportunity to get thrown out of places, which we did. There are always going to be haters, but we were surprised [at] who those were. We had no problem shooting at Alcatraz, for instance, but UC Berkeley's Dwinelle Hall and a cafeteria that the Gay Straight Alliance rented for their youth empowerment gathering were big no-nos.

ES: The scenes we thought were going to be the most dangerous, like filming on the steps of San Francisco City Hall, ended up being the easiest, in terms of harassment. In contrast, scenes like filming in one of UC Berkeley's bathrooms got the police called on us. When we're approached by someone who looks like they might be some kind of authority figure, we often try to convince them it's a “school project.” That can often get you out of trouble.

Speaking of getting thrown out, how did you—or did you—actually shoot inside the HRC store?

This article was published in Action Issue #47 | Summer 2010 Subscribe »

This film sounds great! When and where is it showing?

I'm excited to see it! Speaking of antiassimilationist queers, though, brought to mind the group Bash Back, who purport to be continuing the work of groups like ACT Up. I heard about some scary happenings between Camp Trans and the Michigan Womyn's Music Festical this year that they were involved in. I deeply admire those radical queers that work against assimilation, but today I read a statement from Bash Back that, personally, just terrified me-especially given what I know about what actually went down. Thought I'd mention it if anyone is interested in checking it out. Sorry to derail.