Racist Sandwich is a podcast, and it’s also a story about how white fragility reacts to calls for equity. In 2012, a Portland, Oregon school principal was leading an equity training with teaching staff when she said teachers can leave some students feeling left out when they use white American–centric items as examples in their lesson plans—like the peanut butter and jelly sandwich. “What about Somali or Hispanic students, who might not eat sandwiches?” said principal Verenice Gutierrez. “Another way would be to say: ‘Americans eat peanut butter and jelly, do you have anything like that?’ Let them tell you. Maybe they eat torta. Or pita.”

This comment blew up. Reactions to Gutierrez’s remarks twisted what she said, with headlines like: “Oregon school principal: Peanut Butter sandwiches RACIST?”

“People, and the media, fixated on the sandwich remark,” said Racist Sandwich cohost Soleil Ho. “Of course, she had a lot of valid and important things to say about white supremacy in school curriculum offerings, in language, in microaggressive behavior toward students of color in the district. But people were more outraged by the imagined scenario of a person calling a sandwich racist, so they ignored the fact that it was a metaphor for the cultural motifs we take for granted in our society. The power of that metaphor is why we named our podcast ‘Racist Sandwich.’” Soleil and cohost Zahir Janmohamed started up Racist Sandwich this spring and are now on their sixth episode.

I sat down with Soleil and Zahir in the studio where they chat about food culture with guests ranging from chefs of color to a foodwork researcher. We talked about their personal relationship with food, whether it’s important to discuss whiteness in the restaurant scene, and how you’ll never have to hear a white chef defend his appropriative dishes on their show. 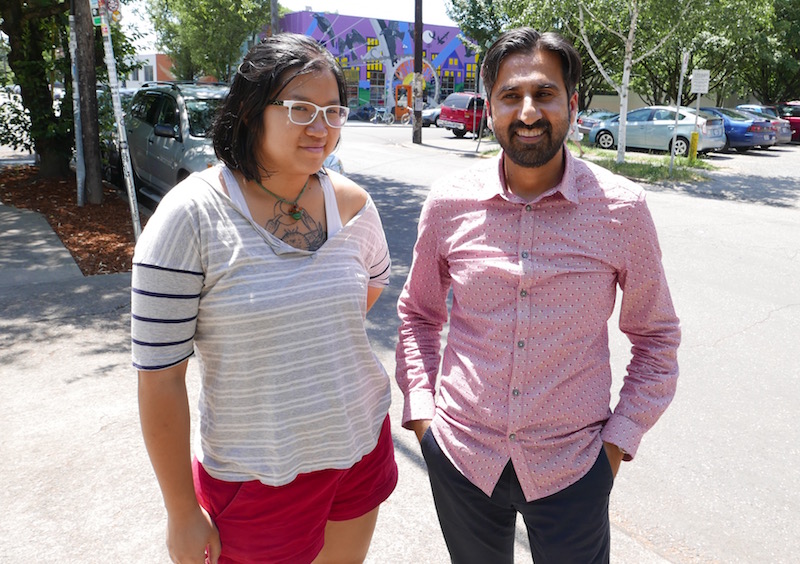 AMY LAM: Why is it important to talk about how gender, race, class, and food culture interact with each other?

SOLEIL HO: While I was in college, I took this film analysis class where the professor had us read this really amazing paper about this five-second shot of someone knocking on a door and how it was so pregnant with meaning and possibility on the intersections of class, gender, and whiteness. I thought, What? Five seconds?

Before that class, I thought it was possible to overthink things, but I started to realize that analysis can apply to so many things in life that we take for granted. I think food is one of those things that we take for granted all the time, as just beginning and ending in your body. There’s nothing else that happens. There’s nothing else that the food takes on and you take on, in that context. But as we all know, that’s patently untrue.

ZAHIR JANMOHAMED: For me, I just moved to Portland last fall, from California. I was really taken aback by the lack of diversity and how white the city is. I remembered in 2015, there were two articles. One said that Portland is one of the best food cities in the country, and the second one is that Portland is also becoming—unlike other major cities with a population above 500,000—whiter and whiter. I thought that’s an interesting tension to explore, is this notion of you do have more and more “ethnic” restaurants, and yet you see the diversity in those areas sort of dwindling. So I thought that was a fascinating thing.

I find so much of the writing about food to be so lacking. You have a review of an Indian restaurant that, instead of talking about the quality of the food, they’ll talk about how Hindus worship cows. Just tell us if the food is good. Don’t go on these long explanations about what Sikhs do. It’s like, come on. Food writing also can Orientalize others; it can essentialize others. And I wanted to try to have a conversation focused on people of color.

In reading and learning more about you two and your podcast, I found that I wanted to learn and understand more about your personal relationship to food, what it means to you personally, and how does that relate to your own identity?

SOLEIL: That’s a very multifaceted question, Amy. My personal relationship to food…I eat it every day. I wish I didn’t have to. Every day is a battle to keep myself from eating chips for breakfast, lunch, and dinner.

But it’s my livelihood. It’s my work. I am a chef, professionally. I’ve been in the food industry for almost a decade, and I’ve also been a food writer. Food is the ultimate conversation starter. Sometimes I feel like I make up for not being interesting personally just by being a good chef [chuckles].

ZAHIR: I’ve never been asked that question. I love food; I enjoy eating it like everyone else does. My relationship to food? I don’t know. I sort of have more of a fraught relationship with food because I think partly growing up from immigrant parents, you grow up feeling like your food is smelly, or it’s not good, or not really desiring your own food. Now, I’m almost 40. I think about things very differently.

We keep talking about how food brings people together. That cliché is true sometimes, but it also tears people apart. I lived in India for the last four years, and in India, you have whole housing societies organized around food, like vegetarian-only areas. That’s a way to keep people of different faiths out. In that sense, I want to interrogate the conversation around food, interrogate our ideas about food a little bit more.

SOLEIL: I mean, it’s possible. There’s no food police. I’m not the food police. It’s possible for them to live in a bubble where everything’s okay, and everyone in that bubble affirms what they’re doing.

But is it possible for them to do it without reinforcing colonialism?

SOLEIL: Mm! Yes, I do think so. I think it’s possible when you are in the community, and you do it for the community, and you don’t just do it for yourself. I think that’s the opposite of colonialism, is community and not impressing your vision of what that community should be on it but rather adapting yourself and molding yourself to fit the needs of the community. For example, there are amazing white chefs who have done the work to really understand where the food is coming from, like Fuchsia Dunlop and Nancy Singleton Hachisu. On the other hand, there are many more chefs and restaurateurs who think that just going on a holiday in Bali gives them anything more than superficial knowledge of a cuisine and a people. That’s where the imperialist attitude comes in: when one positions oneself as the discoverer, the conqueror of a culture, and not an active participant.

ZAHIR: When we started this show—at least for me, I’m not particularly interested in the question of, “Can white people do this? Should white people do that?” That’s doesn’t interest me. There are some restaurants here in Portland that I don’t know who owns it, and they’re great, and I really couldn’t care who owns it. It’s the characterization that I don’t like. I don’t care if some white dude has an Indian restaurant, but don’t make it into some sort of random Bollywood script, as if every Indian family’s sitting and watching Bollywood movies every night.

I think so much of our discussion about food and race is getting bigger and bigger, which is wonderful, but it still centers around discussion of white chefs, and I’m not interested. Conversations we had with chefs like Kusuma Rao and our other guests is so much more interesting to me. That’s something that I don’t think we’ve really heard much. That’s what excited me as someone who’s not in the food world.

The reason why there are so much discussions about white chefs and white owners of restaurants is because it’s also about who gets credit. It’s necessary to continue to talk about the work that they’re doing because often, the white chefs get the credit and celebrated for types of food that the people from the actual community are cooking and making, but they’re not getting the accolades. Therefore, they’re not getting the money with the customers coming through the door. Within this discussion of food and food culture, we have to be mindful to talk about how we dismantle what we think is valuable. We can’t talk about white supremacy without talking about whiteness, right?

SOLEIL: It absolutely comes down to who gets more credit for their labor. Not just in the abstract sense, like in the sense of cultural capital. Who gets the acclaimed positions, who gets the awards, who gets compensated more richly for what they do? I’m not saying that that’s what it’s all about, but white supremacist ideas of who belongs in the world of food do have a ripple effect on us, from hiring practices to business loans to our precarious sense of ownership over our cultures. When we see only white chefs or food writers or restaurateurs tell us what our cuisine is, that’s white supremacy. I just read this amazing essay in Oxford American about Southern food by the chef Tunde Wey, where he says, “White privilege is an obscene thing. It takes everything, quietly, until there is only silence left. Then it takes that too and fills it with noise.”

ZAHIR: I’m interested in the fact that people want to have discussions about food and race. Let’s just do this: We don’t have to talk about white people at all. We don’t want to have a conversation where we’re bashing white people, but at the same time, if a conversation is gonna go there, I’m not gonna stop a guest and say, “No, no. Don’t go there.”

SOLEIL: I think a lot of the white chef–permission thing also comes from a thread of call-out culture. It’s like, “Well, this white chef’s doing this. That’s fucked up.” Politically, I don’t think that’s sustainable. Part of my reason for doing this podcast is also just highlighting the voices of people of color who are within the community and within the industries that we’re covering and prioritizing that, rather than giving white chefs a place to defend themselves. Because I don’t really care.

This is actually really exciting to me as a listener to know that I’ll never have to hear a white chef come on your show to defend himself. [laughs]