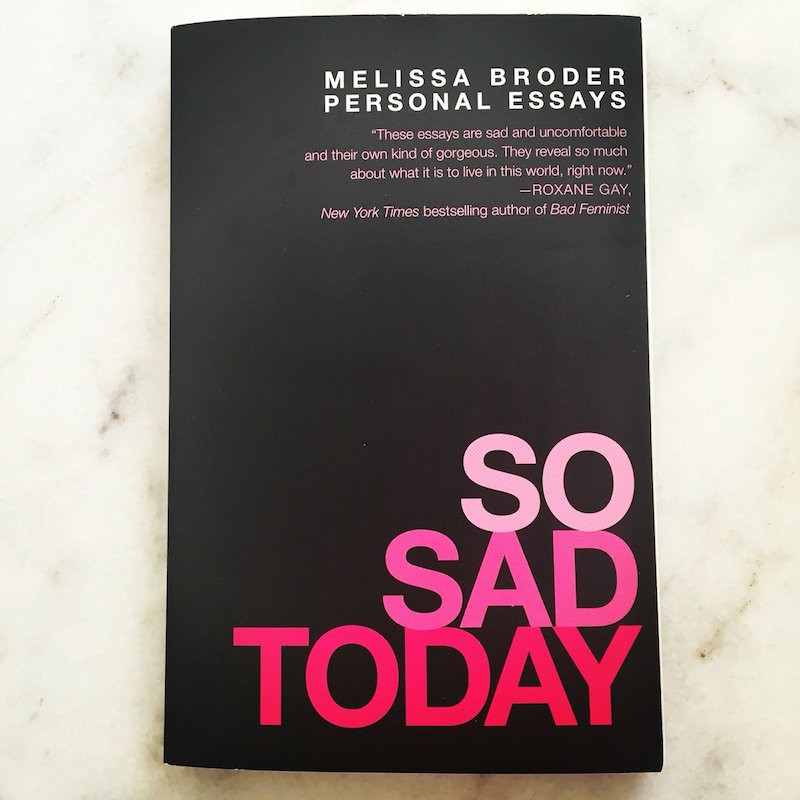 Melissa Broder needed a safe space to vent about her feelings of anxiety and depression. So she turned to Twitter, creating the anonymous account @SoSadToday where she started posting dark and funny reflections on the futility of life. Broder is talented at using 140 characters to say something both profound and hilarious—she is the author of four books of poetry, so she’s used to using words effectively and efficiently.

The account gained over 300,000 followers and spawned a book by the same title. The book version of So Sad Today, which came out in March, is a collection of personal essays that capture both Broder’s wit and the unforgiving relentlessness of anxiety and depression.

When Broder revealed her identity to Rolling Stone last year, she said, “People have asked me, ‘Are people still going to be sad in March 2016? I was like, ‘Dude, sadness is universal. Sadness is not a meme.” While it resonates with millions, both @sosadtoday and the book portray anxiety in a deeply personal way, they don’t cast mental illness as a one-size-fits-all situation. As someone who lives with depression and anxiety, I saw myself reflected in Broder’s cutting words. The nature of depressives is only decipherable to those who carry the experience. I know what it’s like to live with something that is both heavy yet undetectable in plain sight. Like Broder, I’ve had recurring moments of guilt and self-loathing, almost angry that despite my privileges, the sadness has stayed the same or waxed and waned. 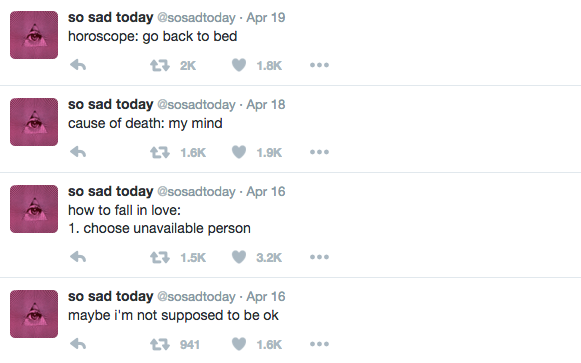 When asked about the separation between @sosadtoday and herself in a Vanity Fair interview, Broder noted that her online avatar, “She’s me but she’s the messiest parts of me.” While reading So Sad Today, I also saw the messiest parts of myself.  My depression has never been beautiful or an artistic expression determined to offer some big truth about life. My depression has robbed me of happiness, as well as mental and emotional stability. Depression is a liar and thus causes feelings of isolation and alienation. When thriving in its most aggressive state, depression makes me feel detached from the world, a single boat punctured with leaks, drowning in the middle of the ocean. The pain of sadness not only clouds my vision, it warps my self-image into a grotesque caricature straight from a sadistic funhouse. Compliments bounce off me and I can only mainline my own poisoned logic. Will it always be like this? My depression says: Yes, you deserve pain. You’re a failure. You’re unloveable, you’re ugly, you’re not thin enough, you’re not smart enough. YOU are not enough.

When trapped in its fortress, depression tells me that I will never escape its control. Few people in my life have understood or can understand depression and its accompanying henchmen. I can’t find a way to translate the visceral into the concrete. Even the most well-meaning people cannot wrap their heads around the notion of a compulsive mind that self-sabotages to the point of self-destruction. But I connect with Broder’s work. Although some of her essays bear no resemblance to my experiences, I can identify with her struggles. I see myself in her attempts to thwart loneliness with shitty relationships with boys and men that were only looking for a quick fix. I see myself in Broder’s text-related anxieties, from the agony of wondering when he’ll text back to the masochistic impulse to prop up old flings as lost opportunities for healthy relationships, rather than recognizing that I was lamenting a fantasy.

The collection’s opening essay, “How to Never Be Enough,” acts as a general overview of the book’s unifying theme. Many people, even those without the demon of depression, feel as though they are not enough. They search for temporary happiness and distractions. They yearn for the magic trick that will erase all of their problems and insecurities. In the context of depression, the feeling of not being enough is amplified, a flame so hot and lethal it turns from red to blue. Broder reveals, “An external attribution exists to make you feel shitty. It’s a handy tool, wherein you perceive anything positive that happens to you as a mistake, subjective, and/or never a result of your own goodness.” This is the power of depression: self-doubt becomes an absolute measure of your self-worth. It doesn’t matter how many people bestow praise. Depression is hell-bent on making sure you dismiss anything positive.

In another powerful essay, “Love in the Time of Chakras,” Broder describes her time working at a Bay Area company she calls Electric Yoni. The company was a Tantric-sex nonprofit that seemed to be one part hippie commune and one part New Age snake oil. Broder discusses some of her sexual partners with little to no flattery, surmising, “When you’re lonely and blacking out in strange places, you let other lonely people do what they want to you. You call it free love.” This take on “free love” is born out of sadness, a sadness that prevents Broder from making healthy, reasonable choices. Instead, her desires were filtered through the running commentary of self-degradation.

Writing for The New Yorker, reviewer Haley Mlotek pinpoints the allure of So Sad Today: Broder’s willingness to be vulnerable. Like traditional memoir, both Broder’s tweets and the essay collection are an attempt to make sense of her anxiety and mental-health issues via confession—to write it out and get it all down in order to get the toxins out of the body and the system. Mlotek notes, “Works of confessional writing, especially those written by and for women, are as much an attempt to connect as a way to unload.” Broder and I may have a vast array of differences, from cultural to physical, but her unflinching essays speak in a language of familiar sadness. It’s a palatable sadness, softened by sarcasm, dark humor, honesty, and emotional nakedness. The essay titles, including “Help Me Not Be a Human Being,” and “Hello 911, I Can’t Stop Time,” read as song lyrics borrowed from the likes of Sad Girl Poster Child or Lana Del Rey. By diving into Broder’s vulnerability, the reader is able to see themselves. I dove into Broder’s work and was reminded that although depression make me feel small, I am not alone.