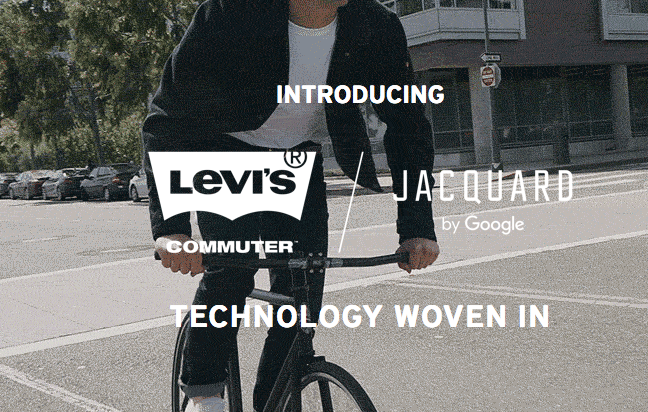 In 2015, Google’s Advanced Technology and Projects division (or ATAP, which self-describes as a “small, scrappy group of pirates working on wicked-cool shit”) announced a fascinating new technology: Project Jacquard, which produces textiles with conductive thread and multi-touch sensors woven in—the first step in turning your jacket into a computer. In fact, Project Jacquard’s first application is a denim bicycle-commuter jacket designed in collaboration with Levi’s.

The jacket itself is pretty straightforward: A woven panel of conductive fabric on the sleeve detects gestural inputs much like the face of a smartphone does, and a removable Bluetooth attachment on the cuff link sends those inputs to your phone. You can answer and dismiss calls, look up directions, and change your music without ever having to pull your phone out of your pocket or bag. For cyclists, this offers a nifty way to move through a city without fumbling with a device. This is an especially significant safety benefit for cyclists in metropolitan areas, where your attention is often split between navigating the city and not getting smashed by cars. Moreover, the jacket can be washed and treated as normal, so long as the Bluetooth cuff link is removed first. The jacket is scheduled to be available for purchase in late 2017.

The collaboration with Levi’s is mostly a “proof-of-concept” design, a demonstration that Project Jacquard’s technology can be produced at scale and survive the rigors of denim manufacturing. While its functionality is relatively simple, the commuter jacket is the first step in the world of truly wearable tech. Writing for The Verge, Nick Statt claims that the jacket has “restored his faith in wearables” because it performs just as a wearable ought to: it “integrate[s] helpful and interesting tech into my daily life without feeling like I have to go out of my way to use it.”

ATAP would have users believe that Project Jacquard is neutral. In theory, its technology would be an open-source platform, allowing the field of fashion and clothing designers to create something new alongside programmers and developers. The technology is flexible enough to be either obviously distinct from the rest of the garment, or woven in so discreetly as to be invisible and tactilely undetectable.

But in ATAP’s beautifully produced video introduction of Project Jacquard, the implicit emphasis is on menswear. When the video shifts from concept to design, it cuts to London’s Savile Row, a street legendary since the late 18th century for its bespoke suit tailoring. And of course, Levi’s smart jacket is a men’s cut, as shown in a promo video featuring a man cruising around San Francisco on a fixed-gear bicycle.

Despite illustrating  new possibilities of collaboration between technology and fashion design, Project Jacquard’s vision is free of  women, the primary demographic focus of the fashion industry. It’s narrative is about blending the old with the new, and what’s more enduring than classic menswear? Men’s suits and jeans have remained relatively unchanged for much of their existence—Savile Row’s history goes back centuries, and even Levi’s has existed for more than 140 years. Womenswear, on the other hand, has long been considered frivolous, faddish, and ultimately pointless.

As we did with most smartphone designs and prosthetic devices, we are seeing exciting new technologies already designed with men and male agency in mind, codifying norms before they even hit the shelves. Project Jacquard could be exciting for a number of things, but fancifying menswear with technological interactivity simply isn’t one of them.

We are coming into a time of literal soft computers, one in which our electronics need not be housed in hard plastics or metals. They can become malleable, sit right on the skin, live in our jackets and bathmats and upholsteries. We could be looking at a future in which we are sheathed in computing power, every article of clothing a matrix of information and interaction, no longer just socially coded but literally also coding. We could be looking at fully integrated computing.

Our current interactions with computers are intensely visual. The development of haptics, the application of tactile sensation to control software applications such as vibrational feedback when using the touchscreen on your phone, has been the first step towards computer interaction as an embodied experience; Project Jacquard takes that even further. Our experiences with networks can be about more than just the screen. Not only would this dramatically rework possibilities for people with visual impairments, but it would also open up network technologies to material discourse.

Feminist and anticolonialist scholars have long attested that the dominance of visuality plays an integral part in imperialist, patriarchal epistemology. In his essay “Scopic Regimes of Modernity,” Martin Jay outlines the argument that the equation of “Eye = Mind” supports a disembodied and universal perspective, therefore allowing the subject to abstract himself (for the subject position here is necessarily male) from the world and make it available to his manipulation, surveillance, and domination. He transcends the material world by privileging vision over all other phenomenological perception, assuming a position of objectivity and detachment.

This transcendence has always been a privilege of white, able-bodied men; the Cartesian mind/body split, in which the “self” is abstracted from the body, is a position only available to those who have never experienced oppression based solely on bodily difference. Designing for the body is so often an afterthought in tech because the body is not pertinent to a white, male identity in a racist patriarchy. It’s part of why men’s clothing is considered “unisex” and the Caucasian male body is taken as the baseline for essentially all technologies designed for “everyone.” Computer and network technologies have mirrored that Cartesian split and are similarly abstracted from their material forms—the “real” tech is data, not the server farms or computer cases.

But on a philosophical and material level, the technologies of Project Jacquard have the potential to unseat the dominance of the scopic regime that underpins white male privilege. By making technology inherently tactile, the materiality of the computer is not only made visible but also critical to its functionality. In a sense, the “body” of the computer becomes just as important as the software.

Racism, sexism, and ableism are rooted in the body. Racial and gender identities as prescribed by societal norms are predicated upon what a body looks like—to have these identities, the body cannot be transcended, negated, or denied. With Project Jacquard, we could be looking at the beginnings of an epistemological shift that mirrors minoritarian experiences rather than repeating the powers and privileges afforded only to those whose bodies define the norm. If the materiality of the computer matters, then the material matters—we can begin to understand that meaning is made through more than mere data. Bodies, in all their messy specificity, could be reframed as integral to technological discourse, rather than merely design obstacles. And if the project is successful, we could be looking at conductive fabrics made available to anyone with access to a fabric store—the possibilities of Project Jacquard extend far beyond bespoke clothing and designer collaborations.

I’m not saying that smart jackets are going to tear down the patriarchy. But it is worthwhile to recognize the potential power of an epistemological shift. Ubiquitous computing and network technologies have radically affected our daily lives, our interactions with each other, and our relationships to our own bodies; rethinking tech means rethinking ourselves. Those technologies have, up till now, always privileged a certain degree of intangibility, their material forms merely terminals for our clumsy flesh to access the “real” tech, the code and the algorithm. To imbricate the material with the technological as Project Jacquard does is to recontextualize cybernetics as materially dependent, contingent, and specific. It could reconfigure our expectations of technology to take our bodies, differences and all, into account. It could make our bodies matter.

But not if we’re just making suit jackets with it. 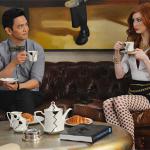 John Cho and Karen Gillan tea up in a new sitcom.