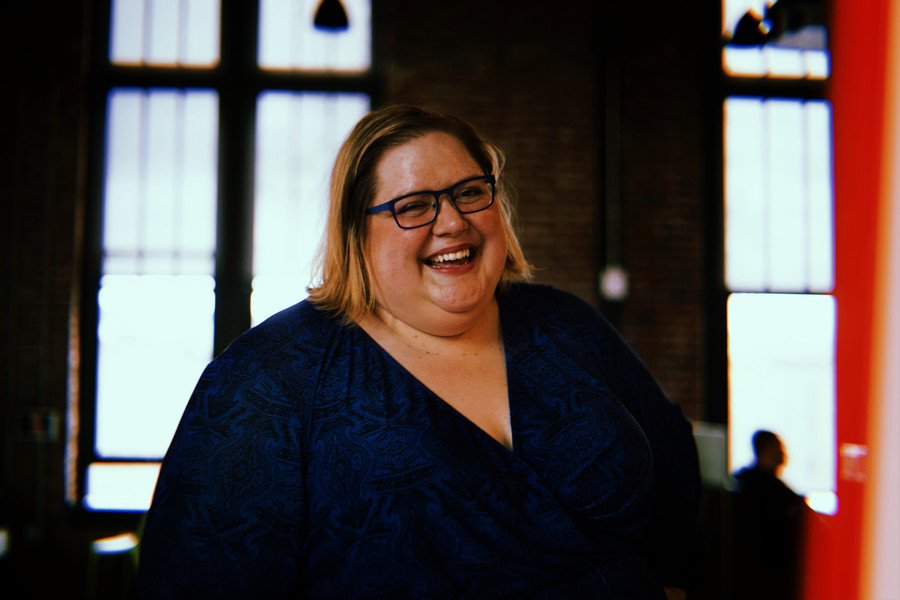 The world isn’t designed for fat people; no matter where we turn, whether it’s a restaurant, an airplane, an amusement park, or a movie theater, we’re constantly reminded that our bodies are transgressive and unruly, and that if we want to fit, we need to be smaller. If you are beyond a certain size, going out in public comes with its share of anxiety. There are a number of thoughts that run through the mind: Will we fit in the chair? Will the rollercoaster or water slide have a weight limit? Will we be met with snickering when we request a seatbelt extension when boarding a plane?

AllGo, an app that’s currently in Beta, is aiming to make the experience of being a plus-size person in public more pleasurable. Rebecca Alexander’s founding of AllGo has earned her a spot on the 2019 Bitch 50 list because any app designed to cater to plus-size people is worth recognizing—and so is the person who created it. Alexander spoke with Bitch about how AllGo works, where the app will go next, and how creating the app has brought her into community with other fat people.

Roxane Gay wrote, “As I got bigger, my world got smaller.” What does that phrase mean, exactly, and how does AllGo work to combat that idea?

I’ve been a large person, but I’ve also become larger in the last 10 years, and I found myself [not] wanting to go to places I hadn’t been before. I would get invited to a show or a play, and I’d make up a reason not to go because I didn’t want to have to deal with the seating. I didn’t know what my options were. I had a job where I had to go out and meet people in public spaces, like coffee shops or bars, and I would spend so much time trying to figure out if I was going to be able to fit in those spaces or if I was going to arrive and the first interaction in a professional environment [would] be, “I’m sorry. I can’t fit. Can we move somewhere else?” That’s happened [to me], and it’s so wrought with emotion for me; it was not something I ever wanted to experience as a professional.

And then I took a break from the work I was doing. I tried to get bored one summer, and I read two books that talked about this issue, Hunger by Roxane Gay and We’re Never Meeting In Real Life by Samantha Irby. And both of them, both fat women, described this issue of scouring the internet to get information to reduce anxiety and the internet coming up short. [That’s when I realized] I’m not alone and decided to start this company.

Can you talk about the shame that often comes for plus-size people who realize that public spaces are not designed to accommodate their bodies? How does AllGo work to prevent that kind of shame and embarrassment?

Just reframing this conversation is a huge part of what we do at AllGo. So rather than our users or the people who come to us [being] worried about not fitting because they’re too big, we frame the [conversation] to “you’ve been failed.” The people who are designing restaurants are not doing right by you, and they need to do better. [Size] is a huge [component that] designers should be [thinking about], and they’re not doing their jobs [effectively] if they’re not.

How does the AllGo app work?

Right now, we’re still in beta in Portland, Oregon, but we’re working on a platform that’s not locked down to geography. Essentially, any place that’s on Google is on AllGo, so you can login and search for a particular place, like a coffee shop, and get a list of results. Then, you can see if an AllGo user has already rated that place; there are thousands of reviews on the platform. You can also leave a review yourself. Our reviews are meant to be as short as possible because when you’re out with friends, you don’t spend all your time on your phone writing a review. We ask you four questions: How many types of seating are available? Do most of the chairs have arms? Do most of the benches move? Is the patio seating plus-size friendly?

As you can tell from those questions, our app is really focused on the restaurant experience. When we initially designed our beta, [restaurants] were very clearly the primary [reason why] people use the app. Our second version is going to have more tailored questions to different types of venue, so [there will be] more detailed questions about theaters and sporting venues and doctors and the care they provide. We’ve also spent a bit of time on theme parks.

What are ways that businesses and other public venues can be more thoughtful about accessibility, particularly for fat people?

Every designer is charged with two things: designing for form and designing for function, and unfortunately, a lot of our problems coming from form taking precedence over function. We have designers [who are] becoming obsessed with Instagram-able design, where people can take the perfect Instagram shot in their client’s coffee shop, but they’re not balancing that [desire] with function. In my experience, designers don’t have enough access to the full breadth of human diversity so [they can] design for the diversity of our world.

There have been some improvements around industry standards, but ultimately, designers just don’t have enough exposure to plus-size people either in their education and training or in their day to day work. This, like any industry, is part and parcel with the diversity of the workforce itself, so we need more plus-size designers. We need plus-size people to be included at every level of decision making when it comes to design. We need people who are working for the government [as it] creates massive public projects, so when they hear a pitch from a design firm that only has 175-pound 5’11” men on their team, they can ask: How is that seat going to work for somebody who has hips wider than 24 inches?” Having empathy as a designer is such an incredible skill, so developing that empathy and then [applying it] when designing is really important.

Does AllGo have any intention to expand to reviewing airlines, and more specifically, why airlines are so resistant to accommodating fat people?

I would love to solve this problem; people spend an immense amount of time and money on air travel, and the experience is still so bad. If you were to chart airline travel of a X-Y axis, then you would see that it’s a major purchase that people feel horrible about. Airline travel is unique in that way because I can’t think of another example where people spend that kind of money and feel bad about it, except for maybe paying taxes, but people see more of the benefit in paying taxes than being crammed into a seat and treated as if they’re less than person for five to seven hours.

There’s a huge problem around people spending so much money and being so dissatisfied, and if those are the conditions, then there has to be a better solution. I’m not a tech bro, but if I were, I would see [these problems] and say, “This is ripe for disruption.” It is. I don’t know how to fix it yet and I don’t have the idea at this point, but I would love to do it. And if anybody else wants to fix it, I’m willing to support them 100 percent.

It’s profound to live in a body that’s so normal, and yet no one designs for.

I never talked about my body before I started AllGo, which is so weird. I used to be one of those people who crossed my arms the whole time I was on the plane because I [thought it] would actually make me smaller. It was completely delusional, but that was my own internalized trauma and dysphoria about what it means to be this large. I didn’t even talk to my best friend about being a large person; it was just not safe for me. So when I decided to create AllGo, I got an immediate education in fat politics, body liberation, and body positivity. I’ve been involved and interested in a number of social-justice movements, but I never engaged in explicitly fat spaces before.

So [building a] fat community has been tremendous for me; my life will never be the same. I am so much more at peace with who I am. I used to think that my life wasn’t actually happening, that it would start once I got smaller; AllGo has changed that for me completely. I hope that we can do that for others as well. AllGo’s [role] in the fat community is helping people realize that [design failings are] not personal failings. There are lots of reasons why spaces don’t fit fat people, and none of them have to do with anyone being too big. They all come back to some shortsighted design decision that was made 70 years ago that no one has felt the need to update. When you start to see that data, it becomes a lot easier to accept yourself.

What resources would you recommend for other plus-size people who are just starting their fat-positive journey?

I love reading Your Fat Friend because their writing is really astute, and they have something to offer anyone who’s on a journey. The She’s All Fat podcast is pretty approachable, especially the first two seasons, and the [hosts] do a great job of demystifying body positivity. The original hosts, April and Sophie, were also just really entertaining. Reading Roxane Gay’s [books] Bad Feminist and Hunger can really open your mind to some of the more really nuanced [aspects] of the body positivity conversation. You also wrote a fantastic piece two years ago on the history of body positivity and fat liberation that’s phenomenal. It has been a guide that I have [revisited] multiple times.

I also just wrote a children’s book about body image that’s coming out on December 16. A friend of mine created a startup [after] writing a book about racism for his kids; the book spread like wildfire, and he decided to create a way for other people to write about serious issues in a way that gives children information [about social issues]. I’m really proud of the book, and it could be a great way to have a conversation as a family about what it means to be in touch with feelings about your body. I also take on the commercial aspects of body image; there’s a lot of money to be made by making us feel bad about ourselves.