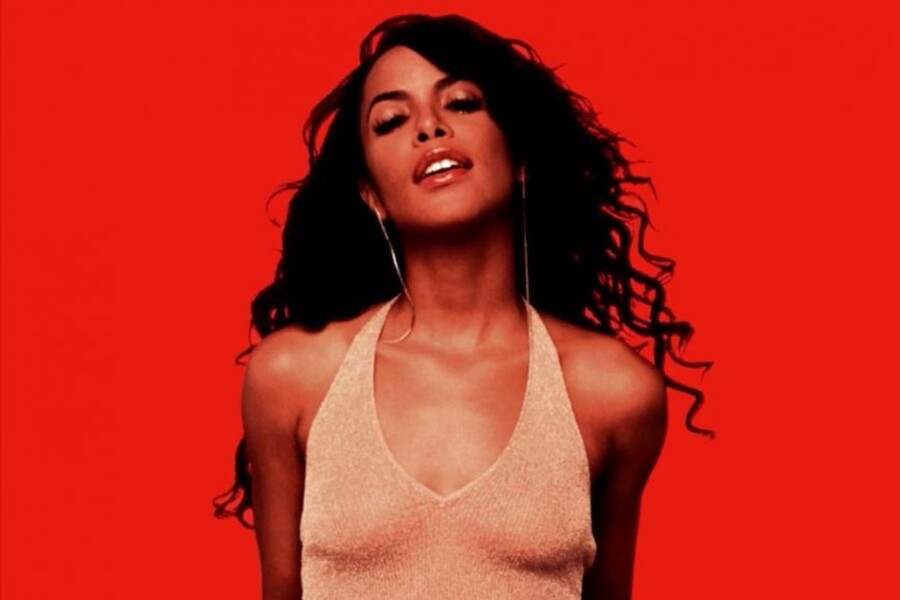 Aaliyah on the cover of Aaliyah (Photo credit: Blackground Records)

I first remember seeing Aaliyah, the late princess of R&B, on a commercial on The Box, promoting “If Your Girl Only Knew,” the first single from her monumental 1996 album One in a Million. She was close up, wearing monochrome, and unforgettable. In the Joseph Kahn–directed video, Aaliyah arrives on a motorcycle in her signature androgynous style—black shades, leather bandana, crop top, baggy pants—and walks into a lowkey speakeasy. The foggy cinematography matches the gritty darker energy Aaliyah and her clique emanate on film, as she uses her blend of smooth angelic vocals and tough-skinned low notes to call out an unfaithful man with a wandering eye. This dexterous singing approach, along with Timbaland’s warpy and menacing sound, came to define her sound.

Cameos from Lil’ Kim, Missy Elliott, and Aaliyah’s brother, Rashad Haughton, embodied the good company that always surrounded the singer. Like so many, I was in awe of the minimalist and mysterious divine feminine she channeled. This moment was Aaliyah’s reintroduction to the world: She was 17 and on the cusp of young womanhood. She worked with relative newcomers Missy Elliott and Timbaland to establish a sound that incorporated classic elements of R&B while rebelling against creative restrictions—a prelude to future left-of-center R&B. Aaliyah’s sublime makeup, signature hair swoop, style, smooth choreography—thanks primarily to Fatima Robinson—and friendly personality were what Black pop stardom was made of. She lived and breathed duality: the swag of hip hop and the sensuality of R&B; a voice that delivered softness but still exerted power; a confident but never haughty aura. As her career progressed, she seemed increasingly otherworldly, but she always remained connected to Black culture, especially Black girlhood. She is the patron saint of R&B-pop, a genre that emerged during the late ’90s and early aughts.

Before fame, Aaliyah Dana Haughton got her artistic training taking vocal and dance lessons and performing in school plays in Detroit, where she grew up. She was born in Brooklyn, New York, on January 16, 1979, and by the age of 10, she was performing on Star Search. Jive Records and Blackground Records, the latter of which was founded by her uncle Barry Hankerson, signed her when she was 12. R. Kelly, well into his 20s at that point, became her mentor and executive produced her 1994 debut album Age Ain’t Nothing but a Number, which in hindsight seems to be more about pedophilia than it does his investment in her artistry. When she was only 15, she reportedly married Kelly, who is currently on trial for dozens of counts of rape and child molestation. In the years following Age, she, her family, and their team kept the details of the marriage and annulment secret. But sexual-assault survivor advocates see Aaliyah as another unfortunate example of the untold stories of Black girl and women survivors in the music industry. Though it has an unsettling background story, the album produced hits such as “Back & Forth” and “Age Ain’t Nothing But a Number.”

By the time she began recording One in a Million, she’d met her devoted stylist, Derek Lee, who incorporated a mix of New York City streetwear, high-end labels, and Jamaican dancehall culture to create her iconic looks. Growing up, designer James Flemons—the founder and creative director of Phlemuns who has worked with SZA, Billie Eilish, Solange, and more—was inspired by the singer’s style of expression. He still sees the impact Aaliyah has on fashion both inside and outside of the music industry. “I think she was riding a wave of genderfuck way before many realized it was more than just a ‘tomboy phase,’” Flemons tells Bitch. “She had a way of interchanging her masculinity and femininity through her fashion sense so effortlessly, and it was obvious that it was so true to her identity as a person. I’ve constantly been intrigued to know what she would have to say about herself and her style at this time when gender identity and expression are so progressive.”

By her sophomore album, Aaliyah’s formula was more magnetic, and her goal was to showcase more of her vocal range. After “If Your Girl Only Knew,” she followed up with “One in a Million,” “Hot Like Fire,” and “4 Page Letter”—all written by Missy Elliott and Timbaland—and helped create a new standard for R&B. “Even 20 years after her death, we still see and hear her in so many different artists who came after her,” says Keithan Samuels, the founder of the website Rated R&B. “Her sound and style will forever be a reference point.” Normani, for example, sampled “One in a Million” on her single “Wild Side,” released in July. In an interview with Zach Sang, Normani called Aaliyah one of her “favorite artists of all time.” The pop sensation also penned a tribute to Aaliyah for British Vogue, stating, “My sound selection is deeply inspired by what Aaliyah and Timbaland were able to achieve.” Brandy has also said her 1998 sophomore album, Never Say Never, was made “in homage to [Aaliyah’s] album that she did with Timbaland.”

In the five years between One in a Million and her third and final album, Aaliyah (2001), the singer had a burgeoning film career, taking on roles that would further align her with the mystical, dark, and edgy. She costarred in the martial arts film Romeo Must Die (2000) and scored her first no. 1 single on the Billboard Hot 100 chart, “Try Again,” from the movie’s soundtrack, which was penned by late singer-songwriter Static Major. The song’s music video scored her two MTV Video Music Awards for Best Female Video and Best Video From a Film and positioned her as a music video icon. She was also cast in Matrix Reloaded and Matrix Revolutions and played the vampire Akasha in the horror-fantasy flick Queen of the Damned that was released after her death. Aaliyah reportedly juggled filming Queen of the Damned in Australia and recording her self-titled project. 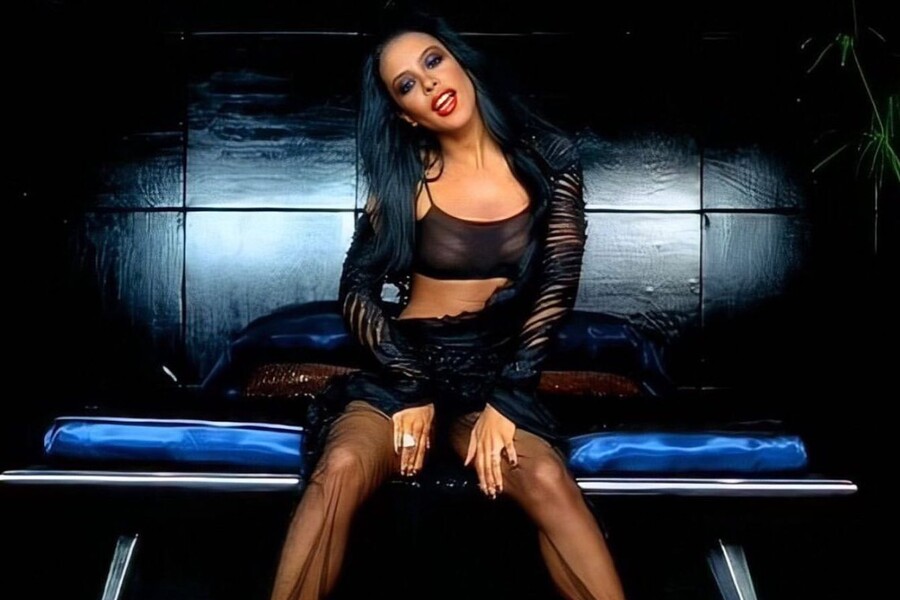 Aaliyah in the video for “We Need a Resolution” (Photo credit: Blackground Records)

Major was part of the collective Swing Mob, which also included Timbaland and Elliott, and he penned most of the songs on her final opus. He worked closely with Aaliyah to arrange tracks that brought out her smooth vocal delivery and told stories of the ups and downs of relationships, showcasing her maturity from teenager to adult. Whether finding common ground on “We Need a Resolution” or offering sweet pleasure to her lover on “More Than a Woman,” the subject matter and lyrics were more direct, intense, and intricate than previous releases. The album’s production elevated Aaliyah as a foremother of expansive R&B sounds, blending genres like electronic, funk, rock, Latin, and R&B. Before her death, NME proclaimed Aaliyah a “radical third album,” positioning her as “US R&B’s most experimental artist.” Solange, one of R&B’s most avant-garde artists, told Interview this era of music inspired her. “Aaliyah was also a huge influence and has always been,” she said in 2017. “Her vocal arrangements with Static Major are some of my favorite in the world.”

The imagery associated with this music was more playful and revealing. Instead of her mysterious black clothes, she was a siren glowing in red. “She had come a long way from the enigmatic ‘Back & Forth’ girl hidden behind baggy jeans and sunglasses, and she was on the cusp of entering a new chapter,” Warren Fu, who designed the album’s cover, wrote in Wax Poetics. “I felt that the album cover needed to be an announcement of her arrival as a woman.” Sadly, Aaliyah’s grown-woman era was cut short. After filming a music video in The Bahamas for her sensual slow-jam single “Rock the Boat,” she died in a plane crash that killed the pilot and all eight passengers on board. In the years since her death, Aaliyah’s influence still has staying power.

In the years since her death, Aaliyah’s influence still has staying power.

Fans pushed for the 2018 MAC Cosmetics “Aaliyah collection” inspired by the soft glam beauty of her later years and credited to her makeup artist, Eric Ferrell. Modern artists emulate the singer’s iconic outfits and dozens of YouTubers have created an endless supply of Halloween costume tutorials inspired by her. In music, many Black women artists, including Syd, FKA twigs, Tinashe, and more, see her as a standard. “I always looked up to singers like her and Brandy because they have softer voices like I do—and they’re stars,” Syd told The Independent in 2017. “We owe our chill vibe to her,” Tinashe told Billboard in 2014. “People were used to artists belting things out. She brought a new vocal styling that wasn’t represented in R&B. Not everything has to be so up-tempo.”

Aaliyah’s catalog finally coming to streaming services is vital to making her work accessible to younger audiences and ensuring her innovative work lives on. Blackground Records released One in a Million on August 20. Her Romeo Must Die and Exit Wounds soundtracks arrive on September 3, and Aaliyah arrives on September 10. Now, 20 years after her untimely death, we still admire the way Aaliyah collaborated with a close-knit group of young Black artists and creatives who bent the rules to create meaningful bodies of work. She had an intuitive sense that community was essential to imagining and building an untouchable new world of music. “People try to bring negativity my way, especially with Brandy and Monica,” she said in Elle in 1999. “If I’m competing with anybody, I’m competing with myself to be original.” Aaliyah did things her way, and for that reason, her legacy remains inextinguishable.

Read this Next: Demon Seed 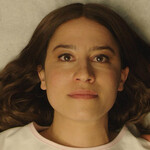 by Sadaf Ahsan
In each of these films, it’s the male ego that guides the doctors and fathers.