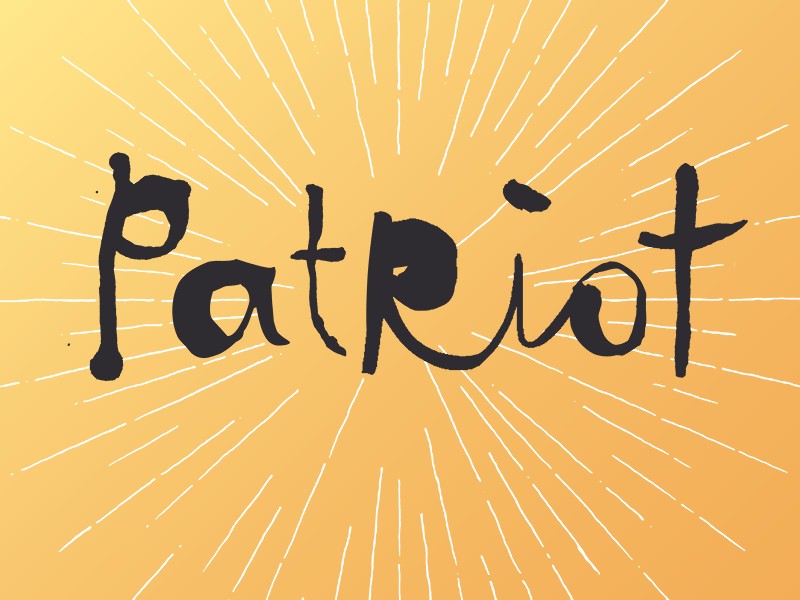 Just in time for the Fourth of July! A day that is about showing your inner patriot while watching bombs go off in the sky. A little red, white, and blue hanging from the front door carries a message loud and clear: A patriot lives here. And if that doesn’t suit your fancy, you can always wear your patriotism because nothing says I Love My Country more than the stars and stripes on Bermuda shorts. But is that the only way we mark the patriot? If we listen closely to the GOP and take notes from Hollywood blockbusters, we have a few ways to define who and what a patriot is these day.

First, it’s enlightening to know the root of words, the original meaning so we can have a deeper understanding of our contemporary use of them. The latin root for “patriot” is pater, meaning, literally, “father.” Which makes sense, right? Since the original patriots are the “founding fathers,” (you know, the slave-holding geniuses who receive political credit for EVERYTHING), it makes sense that the words patriarchs and patriots are used interchangeably when talking about the first white dudes who flexed for americana toxic masculinity.

While we’re talking history, let’s not forget George W. Bush’s reign of patriarchy. When it comes to proliferating the image of A Real Patriot, it’s not just 45 who’s been pushing a nationalist image as the ideal citizen. We have to take it further back to the turn of the century.

Because of 45’s unprecedented presidency, some folks are experiencing a weird nostalgia for George W. Bush. As if the artistic emergence showcasing dog and vet portraits can erase the 2001 passing of The Patriot Act, a post 9/11 piece of legislation that gave law enforcement unprecedented access to public information and equipment in the name of counter terrorism. (Doesn’t anyone remember the, “Oh well, I wasn’t using my civil liberties anyway!” pin, circa 2002?) Hence, “patriot” was pushed down the throat of the public at a vulnerable time and the new era for patriots was born: American safety above all else. Country first. Anything in sacrifice to gain our freedom and spread liberty! Once you prioritize the safety of the U.S above all things, including the rights of its citizens, it can lead to some unruly decision-making by the president. Cue: Let’s start a war fueled by evidence—er, scratch that, NO weapons of mass destructive. Thanks, W.

Unfortunately, pop culture takes cues from D.C. as well. Hollywood is often eager to grab the engendered prescription of patriotism and basically give Mel Gibson and Steven Spielberg every available camera to depict a true patriot. Defining the patriot is simple. The plot lines are simple. The rules are intentionally simple. At its core, the message must be unquestionable and digestible: We are good, they are bad. And Hollywood will typically roll in the dough because of flicks made for white men in protagonist roles who either enact or orchestrate violence against a foreign enemy.

Politicians and film moguls love characterizing The Patriot as someone who puts country before self and all else because it sells and tugs on heartstrings. The Patriot then becomes more than a symbol; it becomes the essence of American identity. If you yourself are not a patriot, the next best thing to do is to support patriots by supporting the boys overseas, or supporting the/a war. Never mind that the decision to enter war is historically decided by the privileged and the resulting sacrifices and reverberations most deeply resonate with the economically disenfranchised. There is no gray in The Patriot’s war because gray would be mean questioning patriotism, as defined by those who wear suits to work and make promises they likely won’t keep. Questioning patriotism is akin to doubting America as the shining city on the hill and doubting the shining city on the hill is a not-so-distant cousin from treason.

Take, for example, the long history of Assata Shakur who on May 2, 2013 was the first woman added to the FBI’s most wanted terrorist list. Shakur was a political activist and member of the Black Panther party in the 1970s, a time when the FBI was committed to eradicating any opposition to war and staining the reputation and livelihood of activists. Shakur, in a letter to Pope John Paul II, describes that she was captured in 1973 after being shot with both her arms in the air and then also being shot in the back. In 1977, she describes the trial that convicted her of killing a New Jersey police officer as nothing short of a “legal lynching.” After escaping prison in 1979, knowing she would never receive a just hearing in the United States, Assata Shakur fled to Cuba where, in 1984, she was granted political asylum and has lived ever since. Shakur’s letter to Pope John Paul was not a request for intervention, but a plea to understand the whole story of the United States, a story that involves torturing and killing people of color. Shakur maintains her innocence and is steadfast in her commitment to the liberation of marginalized communities, especially African Americans, and interrogates the United States’ definition of justice:

The role of the patriot is not only to uphold a particular illusion of being a good citizen. The role of the patriot is also to help provide contrast so it’s easy to see who is out of line, who doesn’t fit, who creates suspicion by doubting America’s greatness. The patriot must be defined so we know who to trust and who to hunt. 45 proved he is in a league of his own when it comes to defining patriotism as he signed the National Day of Patriotic Devotion on January 20, 2017, the day of his inauguration, Trump made this proclamation “in order to strengthen our bonds to each other and to our country—and to renew the duties of Government to the people.” (Even more recently, 45 said he would dissolve some of the headway made by Obama’s Cuba policy by tightening trade embargo and while he was at it, also called for the return of Assata Shakur. Cuba, basically, said no.)

In the patriot’s world, it’s another straight, cishet white dude who gets the glory for extending his arm with a gun in his hand and a vow on his lips to put country before self, and it’s a bunch of patriots who get to define who is the terrorist and who is the loyalist. For enlisted women, that means enduring harassment, sexual violence, rape, humiliation, or other forms of intimidation and discrimination. If that isn’t your fancy, there are other options. (These roles are magnificently outlined in patriotic movies like Saving Private Ryan, The General’s Daughter, The Patriot, We Were Soldiers, Pearl Harbor, GI Jane, and A Few Good Men to name a few. Even non-war movies with American-savior complexes like Armageddon relegate women to the sidelines.)

Cishet women can also be patriots by sending their husbands off to war or tying the yellow ribbon ‘round the old oak tree for their young son. Or women can consider serving as a bedside war nurse or someone’s muse and reason for a patriot soldier to endure torture or survive the trenches. These narratives are oftentold more frequently than actual historical moments, like that time when women took over machinery and manual labor in World War II. Or that one time Black women kicked all NASA ass in Hidden Figures. And, yes, okay, there was also A League of Their Own. There just aren’t many options for women to be considered patriots. For some Black women or other women of color who invest in the liberation of their communities and create friction, state violence, persecution, and torture may await. The story of The Patriot is often one that continues the narratives of patriarchy; the cash-cow story that both politicians and mainstream media continue to proliferate.

Denial runs rampant in The Patriot’s world. Never mind America’s history of imperialism and violent colonialism. Enough already with the history lesson that this land was stolen from Native Americans. Of course slavery happened and now “reparations” is nothing more than a buzzword to make a political point. And can we finally put to rest the sanctions and cruelties our way of life has inflicted on other nations or our beastly consumption of natural resources on the planet? To be a patriot, you have to be subscribe to the iconic mission of Superman: “I’m here to fight for truth, justice, and the American way!” And if you’re not for America, you’re against America. Thank goodness we have Homeland Security, ICE, and TSA agents in airports to weed out those folks and keep us safe.

So maybe the next time 45 calls for the return of Assata Shakur who carries a $2 million dollar bounty on her back, and affectionately describes all those who attend his rallies as “patriots” who voted for borders, walls, and travel bans, we can ruminate the words of this political refugee who describes the divided worlds between free and incarcerated, patriot and terrorist:

At this point, I think that it is important to make one thing very clear. I have advocated and I still advocate revolutionary changes in the structure and in the principles that govern the United States. I advocate self-determination for my people and for all oppressed inside the United States. I advocate an end to capitalist exploitation, the abolition of racist policies, the eradication of sexism, and the elimination of political repression. If that is a crime, then I am totally guilty.