Reigning from the GroundThe Gravity of Soledad O’Brien 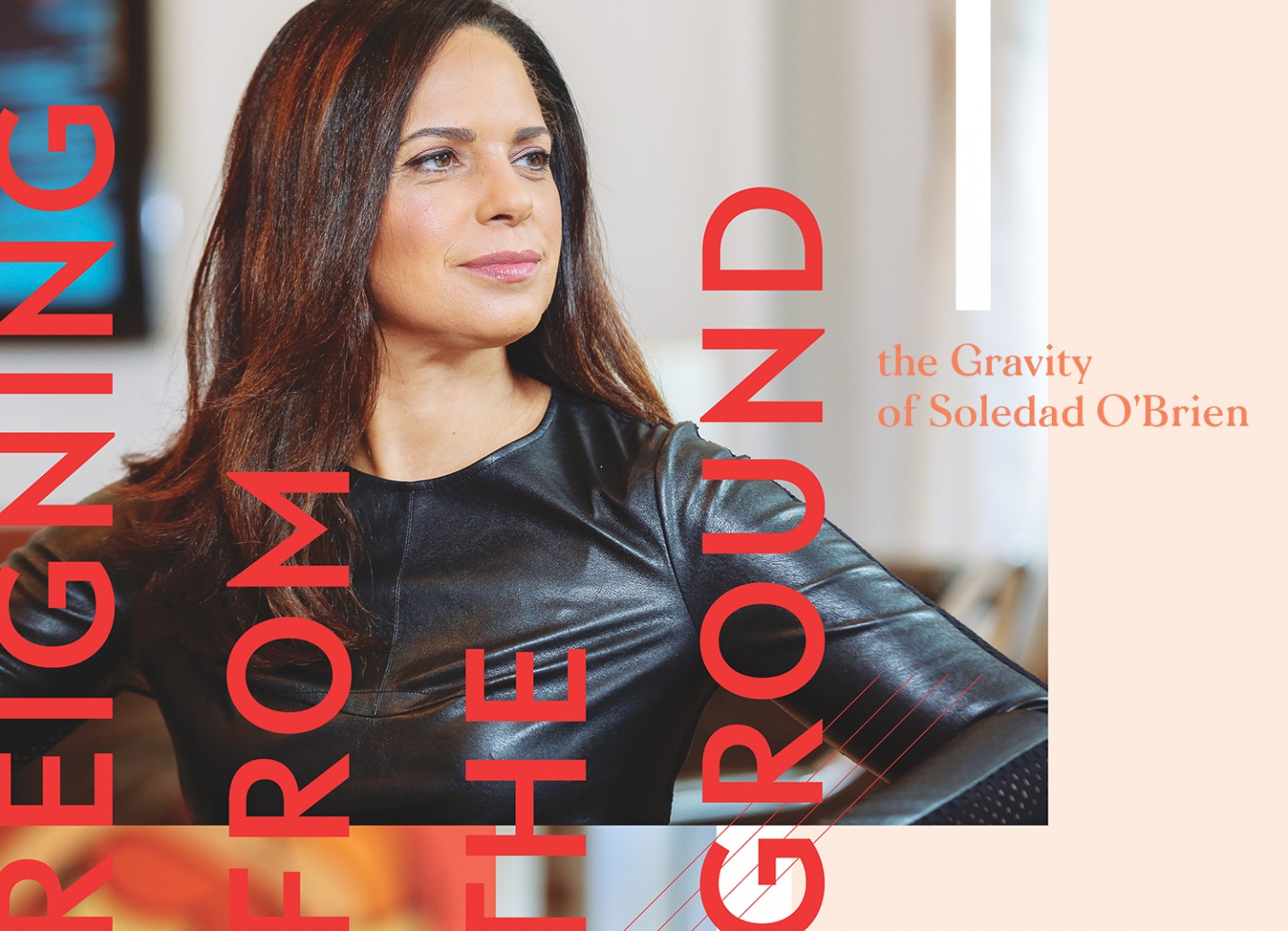 The rumors circulated and reached me months before I met her. People who knew her in various capacities—from her personal representatives to those who briefly met her at a speaking event—repeated the same sentiment: Even with all her successes and all the reasons not to be, Soledad O’Brien is incredibly sweet and down-to-earth.

Like millions of other CNN viewers, I became familiar with O’Brien’s broadcast journalism in the early 2000s, when she secured her status as one of the few women journalists of color in mainstream media. In 2006, during the zenith of blogging, Heather B. Armstrong, a popular writer in the mom-blogosphere, gushed about meeting O’Brien in person and described her “glowing aura”:

“She was exquisite in every conceivable way, perfect hair and makeup and wardrobe, and when she greeted everyone and made small talk, I got the sense that her brain was wired to a digital encyclopedia of everything that has ever happened on Earth, because she spoke with authority on every topic.”

Some descriptions stay with you, even after 11 years, until you have to shed them as prep—because you can’t interview a master interviewer when you’re preoccupied with talk of glowing auras and infallibility.

O’Brien’s home is a sprawling apartment in New York’s Chelsea neighborhood (where, it should be noted, she has lived since well before its ascent to ultra-gentrified chic). Its white built-in shelves are stacked with impeccably aligned books interrupted by candles, framed photos, and artisan bowls and vases. The place is immaculate, but not intimidating. This feels intentional. As far as the famed O’Brien aura itself, it is a bit different than I imagined. She carries herself with a sense of ease and casual authority; although she comes through the door with her hands and arms full, that doesn’t stop her from calling out friendly greetings to me and the photography team. O’Brien has spent the past three decades telling stories. Google her—every kind of story that a journalist dreams about covering, she’s covered: natural disasters, structural inequality, national identity, politics, sports, and narrative stories from marginalized communities. There isn’t one way to describe her successes; they’re like vines—woven and connected, multitudinous and plentiful. After she dropped out of Harvard, she began working as a reporter, in 1989, for the medical radio show Second Opinion. She spent the ’90s reporting and anchoring weekend and morning shows for NBC before eventually transitioning to CNN in 2003. While anchoring CNN’s American Morning, O’Brien was moved to the documentary division and from 2007 until 2013 hosted the series In America, which eventually led to two spin-offs, Black in America and Latino in America.

“I loved the environment, immediately, in the newsroom. Everyone running, everybody having a purpose.”

O’Brien was part of the CNN teams that won the George Foster Peabody Award for coverage of Hurricane Katrina in 2005 and for reporting on the 2010 BP oil spill. She also won three Emmy awards for her coverage on the 2010 Haiti earthquake, the 2012 presidential election, and the CNN series Kids on Race. These days, she’s the ceo of her own production company, Starfish Media Group. And she has four kids.

But broadcast journalism wasn’t the path she expected to set out on. O’Brien was originally studying premed, but after her sister pointed out that organic chemistry was not her calling, she dropped out of Harvard. “I decided that I wouldn’t go to medical school,” she recalls. “And I didn’t know what to do, so I started working at a tv station, and I loved it. And I was immediately good at it. ‘It’ being getting coffee, photocopying things, running errands. I am a pretty good multitasker. But I loved the environment, immediately, in the newsroom. Everyone running, everybody having a purpose.”

So, she’s good at multitasking, to say the least. Throughout the morning, her roles as a producer, parent, daughter, and correspondent are on fluid display. While sitting perfectly still for nearly an hour of hair and makeup, she holds her phone loosely in both hands, typing, calling, confirming, inviting, and following up with a multitude of unnamed projects and people. During brief photography breaks to adjust lighting reflectors or have her hair smoothed and face touched up, her brain continues to roll in at least three other places. At each break, she picks up exactly at the point where she last dropped off: calling her father, following up with her assistant, coordinating the rest of her day.

O’Brien’s affinity for juggling multiple responsibilities explains in part why she returned to Harvard 13 years later for a degree in English and American literature. Despite being older than her classmates, having already advanced in the industry, and being pregnant with her first child, she still FedExed her papers to her professors in order to finish her coursework. What for? “I didn’t like having things unfinished.”

I ask O’Brien if she’s experienced pushback on stories she’s pitched. Without hesitation, she shares the backstory of a failed pitch for a segment of the series In America called “Poverty in America.”

“He didn’t really understand the degree to which a lot of Americans struggle. [This] idea has [been accep-ted as truth] in America today—that poor people are basically homeless people living on the street. It’s a more complicated story than ‘those are just poor people wheeling shopping carts through Times Square.’ Right now, people who would be considered middle class in the past…are struggling across the board, all ethnicities and races. It’s a growing chunk of America, and we could have been on the forefront of that if he’d had a little imagination about what that story could have been.”

How do you navigate the assholes?

“Oh my god, there are so many!” she exclaims, before turning reflective. “I’m sure it’s not just tv news. And it’s one of the things I tell my kids: You have to have a good dose of  ‘suck it up’ in you. I don’t think news is worse than some other fields, but I don’t think it’s an outlier. For me, it was always much more helpful to just focus on what I wanted to accomplish and not get so worried about being derailed by people who would waste [my] time.”

Yet O’Brien is unafraid to talk about times when she just plain got it wrong. She shares a story from when she covered the adoption boom that followed the devastating 2010 earthquake in Haiti, recalling that she and her producer argued over the angle of the story. Her producer loathed the concept of “saving” a country by taking its children; O’Brien, thrilled with all the baby saving, disagreed. But she soon reconsidered her stance.

“The actual challenge was to figure out how to make Haiti work for Haitians, how to make mothers able to raise their own children so they didn’t have to feel like they were giving away their babies to save them. So instead of jumping on the ‘everybody should be adopted’ bandwagon, on which I was almost a willing participant, just having someone else challenge me and say, ‘That’s bullshit,’ that was really helpful.”

Her optimism is almost puzzling, and grows even more perplexing when she describes the outpouring of generosity that followed her decision to leave CNN to run her own business. “I cannot think of an example of when someone was not helpful,” she says, and I’m befuddled, uncertain of how to reconcile that with the known gatekeepers in media and the cutthroat competition to climb to the top of clicks, ads, views, and likes. Media has generous people?

I bring up the current state of women in the media world, specifically the #MeToo movement, and ask if she has thoughts about the Shitty Men in Media list, a Google doc that during its very short life operated as a resource for women to share their experiences with predatory men in the industry. The events ranged from women reporting feeling uncomfortable during meetings to harassment and assault. I ask if such a list has the potential to mobilize vulnerable women in an industry rife with powerful men making the decisions.

O’Brien, who hasn’t seen the list, compares its usefulness to actual reporting: “The challenge for me with an unvetted list is—what’s to keep someone from just having a personal vendetta?” I’m surprised by this response, but then she opens up a larger analysis with one incisive question: “Would a list make a difference?” Here she’s referring to the open secret surrounding Harvey Weinstein, including all the enablers who participated in setting women up to be alone with a predator, the apologists who protected him, and those who kept silent all the years he was abusing women in less powerful positions.

“Reporting is real mobilization,” she says. “Reporting says, ‘There are facts here. We’ve analyzed and examined your story, and you have credibility as a witness or complainant.’ Now we can move forward. The #MeToo movement came out of that, and it came out of saying, ‘We believe you.’ We believe you because we have examined this information…and now there are other women coming forward with similar allegations. That’s what mobilizes people. 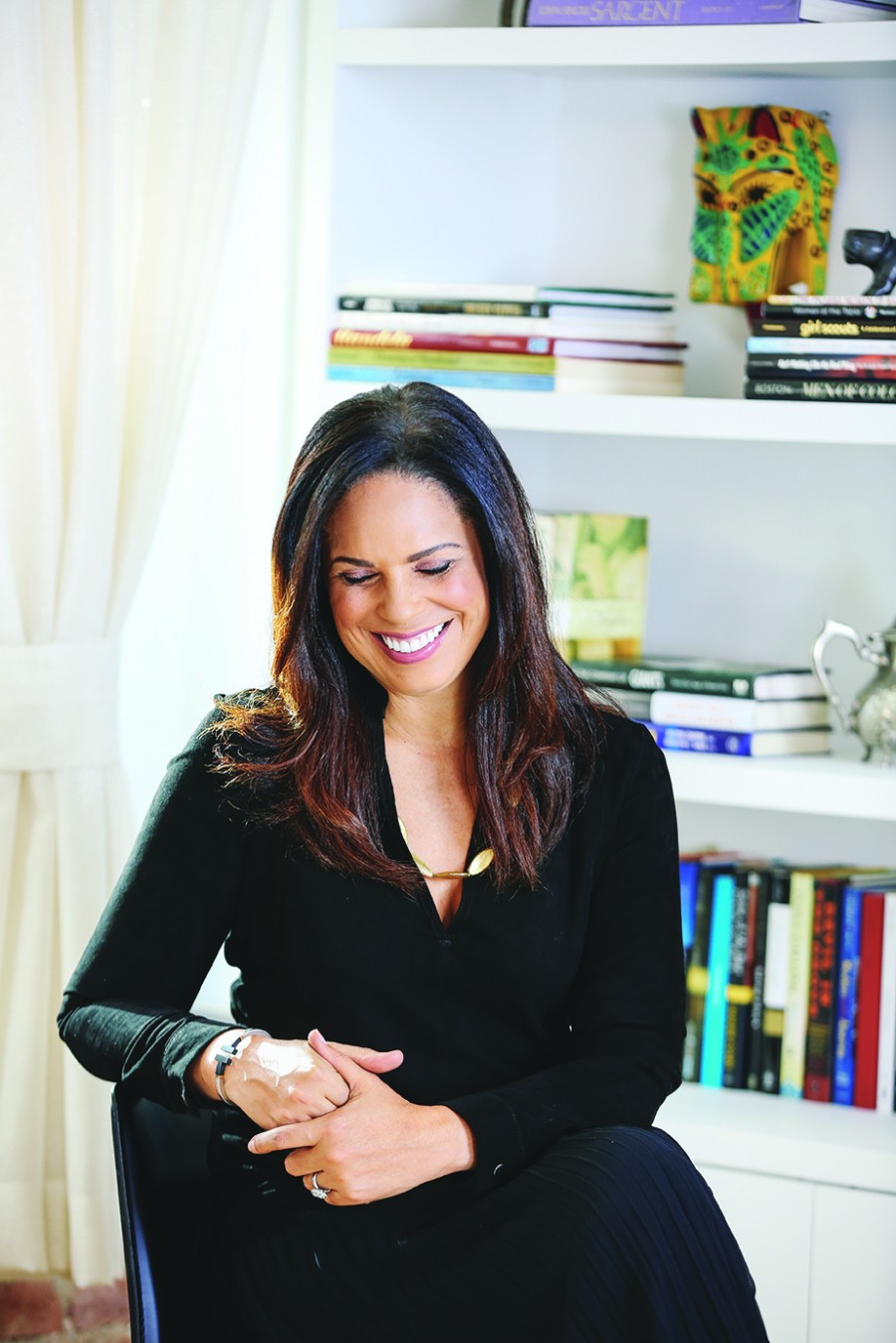 I ask if she thinks change—real, genuine change—is coming for women in media. Her face is thoughtful, and she speaks slowly. “It will hurt women’s opportunities, because men will not want to have mentoring relationships or meet with women alone. In the short term, it’s going to be a negative…. But at the same time, maybe it will add women to the hierarchy, and that will change things.”

After nearly an hour of speaking, O’Brien’s answers are as crisp and broad-ranging as they were in the opening minutes. She talks about what got her through parenting (“drinking!”) and ponders whether personal narratives are diluted when they’re created for mainstream audiences; the problem isn’t dilution, she notes, but the mind-set of “If I’m not familiar with it, it does not merit covering.”

As we snap a selfie and exchange goodbyes, I wonder whether O’Brien is a person whose experience is applicable to regular folks striving for a career in storytelling, because she seemingly transcends the boundaries and borders of stories and the confinements of women in media. And yet her graciousness, patience, and generosity with her time suggests a groundedness that reflects a deeper set of values that fuel her professional endeavors and personal regard for others.

At the point in our conversation when we talk about social media and the perks of being the boss of your own company, she cracks, “Hey, I write the social media rules!” I joke that even if she broke any, she wouldn’t bear any consequences. She quickly interjects, “I’m never going to break them because I [fit within] the guidelines of my social media.”

Because when you get to make your own rules, you don’t have to break them.