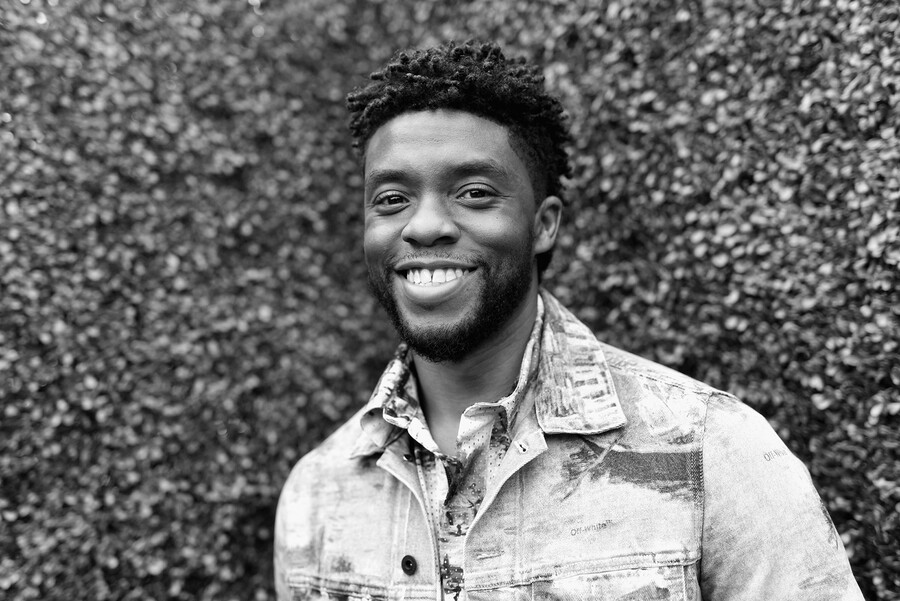 When news of Chadwick Boseman’s passing swept social media on August 28, the overwhelming response was one of shock. At just 43, Boseman had managed to achieve a career that solidly established him as a Hollywood powerhouse. Because he’d constructed himself as such a titan, his surprising loss was immeasurable. Portraying larger-than-life figures like James Brown, Jackie Robinson, and Thurgood Marshall, Boseman was skilled at making great, historic men come alive onscreen. But unsurprisingly, it was his role as the fictional T’Challa—newly ascended king of Marvel’s futuristic African nation Wakanda—that loomed largest in his legacy. As the embodiment of a Black future in which African people are free, the impact of Black Panther—and Boseman as its symbolic figurehead—is a perfect argument for the critical importance of representation in media.

In 2018, Black Panther took the world by storm. Church groups and schools organized screenings. Movie theaters brought in dancers and costumed crusaders to entertain viewers before and after the film. Entire families dressed up, gleefully painting their faces in preparation to witness free Black people onscreen. Eventually, the film grossed $1.3 billion at the box office and held the number one spot for more than a month. As of this writing, it is the 12th highest-grossing film of all time. Beyond its commercial success, Black Panther’s cultural impact cannot be overstated. In a media landscape that’s oversaturated with big-budget superhero flicks produced by the growing Disney monopoly, it’s easy to deride Black Panther’s box office success as nothing more than the creeping effects of capitalism. The cynic’s take is that Black Panther existed to make money, and that Disney and Marvel never would’ve made the film if the company didn’t think it was a good financial bet. That’s true.

It’s also true that Black Panther breathed new life into an aging media product: It was the 18th film in the decade-long Marvel Cinematic Universe and the first helmed by filmmakers and actors who respected Black cultures enough to create something that resonated with Black people across the world. Everyone from director Ryan Coogler and Oscar-winning costume designer Ruth E. Carter to production designer Hannah Beachler and composer Ludwig Göransson understood that Black Panther could not be just another superhero movie. It was a film with the potential to depict—with the endless budget usually reserved for white stories—a free Black country that rejected colonization and assimilation, but still continued to thrive specifically because it was able to protect itself against white intrusion. It was a world in which Black people had managed to remain free—a lifeline into a world we still yearn for today.

Activist Marian Wright Edelman said, “You can’t be what you can’t see.” Reductive as the sentiment may seem, it holds an essential truth. We exist in an unequal world that still struggles to fund and promote stories that don’t reinforce existing power structures. Stories are how we understand the world. Without stories that allow for Black girls to be in space or for disabled people to be the hero, it can be hard for viewers to independently develop the imagination needed to conjure those possibilities. What’s reflected to us in pop culture helps us understand how the world works and what’s possible for us within it. Time and time again, we’ve seen how the real world is impacted by images in film and television. After The Hunger Games debuted, there was a boom of interest in archery, particularly among young girls looking to emulate the story’s heroine Katniss Everdeen.

Popular media is a feedback loop that both tells us how to exist in the world and reinforces what we believe is possible.

A Different World’s in-depth view of Black college life fueled a spike in HBCU enrollment throughout the life of the series. Post 9/11, there was a marked uptick in Muslims being portrayed as terrorists onscreen. Grey’s Anatomy is often credited with encouraging more women to go to medical school. And even the illustrious Whoopi Goldberg credits seeing Nichelle Nichols on Star Trek: The Original Series as having a profound impact on her ability to see herself in the future. The mainstream understanding of the politics of representation asserts that media images should reflect our lived experiences—or at the very least, the lived experiences of many different types of people—so that we can expand the kinds of narratives that are normalized. Media images aren’t neutral and never have been. They’re powerful tools that can be used to generate empathy for people who are different from ourselves. Popular media is a feedback loop that both tells us how to exist in the world and reinforces what we believe is possible.

Without more equitable images, successive generations continue to be hemmed in by the restrictions of the white cishetero patriarchal imagination. That isn’t to say that representation is everything; creating a just world requires far more than merely including queer or neurodiverse people in new television shows. But representation is still a crucial step in the fight against injustice. Images—possibility models, as writer, producer, and director Janet Mock calls them—help us to envision what the world can look like if and when we actively engage our imaginations to imagine a world that’s more reflective of the values we cherish. Advances in the representation of minority groups mean that members of the said group finally get to see themselves in the stories that have always been accessible to their majority counterparts. Media teaches us how to understand the world even when it doesn’t mean to, so how can you begrudge people for wanting to finally be seen?

In Lovecraft Country—HBO’s new supernatural horror show—Atticus (Jonathan Majors), a Black protagonist, wrestles with H.P. Lovecraft’s many monsters, reframing them in the context of a racist American South, and retelling them from the perspective of people for whom horror is not an abstraction. Your mileage may vary on the show’s various ghosts, wizards, and creepy crawlies, but the show itself is a defiant act of reclamation—a racist man’s creations retold by those disallowed from being present the first time around. What does the world look like when different people get to decide what stories we see? We’ll never know until we give them a real chance, but thanks to Chadwick Boseman, we have some idea of what we’re aiming for.

Read this Next: The Women of Wakanda