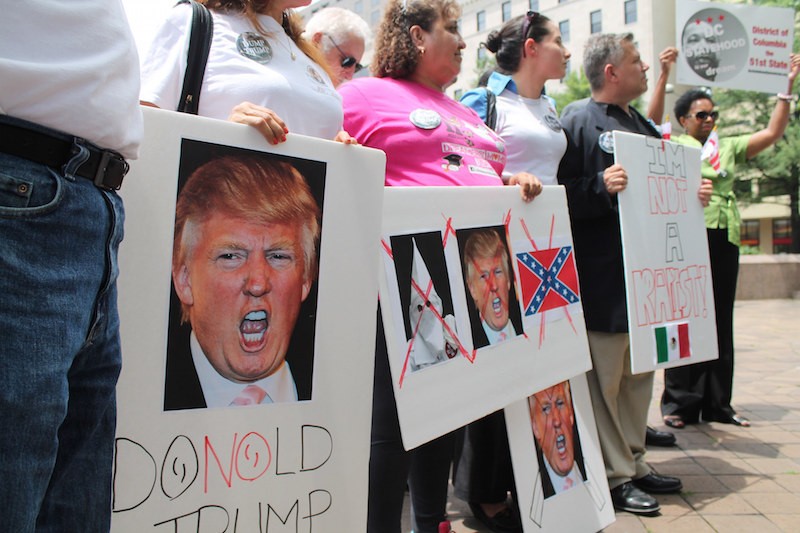 Republicans fear Donald Trump's ability to get out the vote—the anti-Republican vote. Photo by Elvert Barnes.

In a new ad released today, a series of women read real phrases Donald Trump has used to describe women. “Bimbo.” “Fat pig.” “That must be a pretty picture, you dropping to your knees.” “Look at her face. Would anyone vote for that?”

At the end of the litany of insults is a simple message: “If you believe America deserves better… vote against Trump.”

It's no surprise that Donald Trump is a raging bigot. What's surprising is who is behind the ad: A political action committee called Our Principles PAC that was founded by Republican strategist Katie Packer Gage. In February, the PAC released a memo about the need to stop Donald Trump from “hijacking” the Republican party. This new ad is clearly part of that strategy.

While many Republicans are worried about Trump becoming their official nominee, he is the presidential candidate Republicans deserve—and I mean that in the worst way possible. The economic and social policies of the Republican party have long been sexist, racist, and classist. What Trump does is make that bigotry overt. While the Republican party overlooked sexual assault in the military for years, Trump made the thinking behind that neglect explicit by tweeting about how rape is inevitable when you put men and women together. While the Republican establishment has called for mass deportations of Latino immigrants and refugees, Trump is the one who declares that the United States should make Mexico pay to build a wall along the border. In soundbites tailor-made for media dust-ups, he makes obvious the nastiness of Republican policies.

It's no different when you look at issues around gender. As this new attack ad documents, Trump seems to say a terrible thing about women every week. But the policies of the rest of the Republican party aren't any more pro-women than he is. Jeb Bush says abortion should be illegal after 20 weeks, opposes raising the minimum wage, and said that funding reproductive healthcare was a waste of money (“I'm not sure we need half a billion dollars in funding for women's health programs.”). Both Ted Cruz and Marco Rubio have voted to defund Planned Parenthood. Voting against Trump but for other Republicans would still be bad for women.

Republicans are afraid of Donald Trump becoming their nominee because they know his particularly robust history of hateful rhetoric would make it easier for Democrats to campaign against him. He's already been a factor in getting out the vote: The spectre of his candidacy is spurring a trend of Latino Americans rushing to register to vote in time for the November election. That's the kind of motivational effect on women and people of color that the Republican party fears. But if they really want to reach out the millions of people who Trump alienates, the Republican party shouldn't just campaign against him—they should rewrite their sexist and racist political policies.