Give Trans People Control Over Their Stories 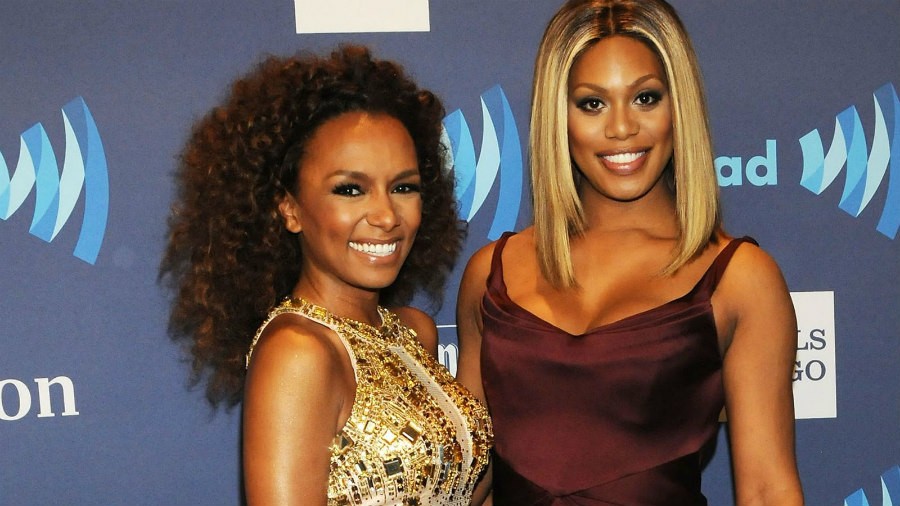 “Please give transgender talent a chance,” Transparent actor Jeffrey Tambor said in a surreal speech following his 2016 Emmy win for outstanding lead actor in a comedy series. “Give them auditions. Give them their story. Do that. And also, one more thing, I would not be unhappy were I the last cisgender male playing a female transgender on television. We have work to do.”

Stories have always been powerful because they shape the beliefs, attitudes, and perceptions that act as an underlying subconscious for entire societies. Between the natural breadth and reach of the internet and the pervasiveness of social media to aggregate information, stories have never been more alive, more accessible, more contagious, and more important. There has never been an easier time to hear stories about marginalized communities from marginalized creators. Thus, hearing a cis man deliver an ode to trans stories while benefitting immensely from the usurpation of those very stories was both infuriating and absurd. Tambor condemned his own complicity in erasing trans people while wielding his award like prayer beads and allegedly abusing and assaulting a trans woman he had power over.

Gender dysphoria—as portrayed by cis men who don’t experience it—is the newest ticket to accolades and fame, the newest macabre fascination and delicacy for a society that gorges itself on trauma porn and the pain of the marginalized. We live in a world where every trans narrative, including our own advocacy, is repurposed as a tool for cis use and consumption, so much so that hoping to be the last cis man to ever play a “female transgender” on television is deemed laudable instead of hypocritical. Cis people have fallen in love with the “quintessential” trans narrative: born in the wrong body, always displaying characteristics of the “opposite” sex, and craving both hormonal and surgical confirmation before “accepting” one’s body. 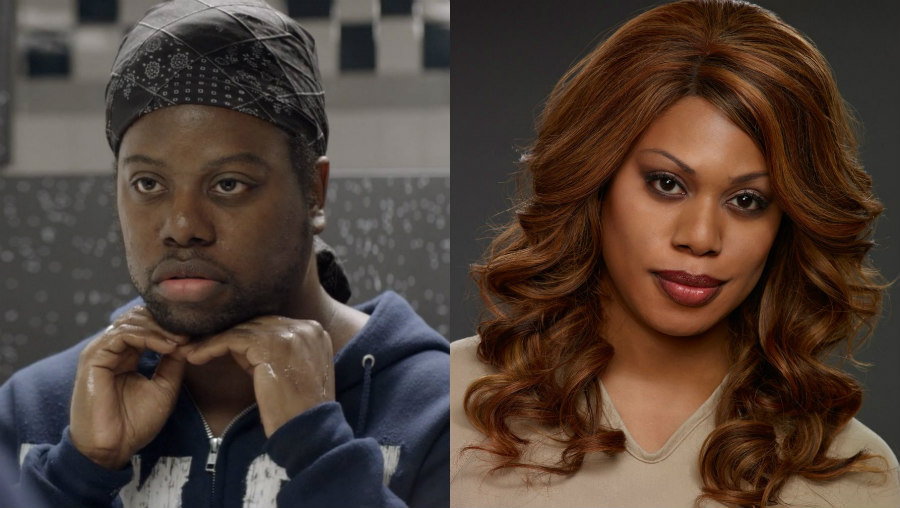 M. Lamar as Marcus Burset and Laverne Cox as Sophia Burset on Orange is the New Black (Photo credit: Netflix)

The cis gaze reduces trans people down to the details most palatable to their appetites, ignores trans and nonbinary people who are not men or women, and renders transmasculine individuals invisible and transfemme people hypervisible, reducing both to outsize caricatures beholden to the laziest gender stereotypes. It denies the personhood, the diversity, and the richness of the trans experience, in favor of the boiled-down remnants served up by and for cis people. Cis people, like Tambor, are praised for acknowledging trans issues even as no moves are made to rally behind the trans community.

This may be because trans stories, particularly those that speak to our truths and lived experiences, terrify cisnormative individuals because they expose the hollowness of the gender binary around which so much clout and capital is unevenly distributed. At its core, trans stories and trans art has the potential to speak to a liberatory yearning in all of us with which anyone can identify and connect. (Just ask the Wachowskis, whose seminal project, The Matrix, very nearly defined 21st-century science-fiction filmmaking and cyberculture.) Make no mistake: Cis control of trans narratives is neither accidental nor harmless. A culture that encourages a sharply limited view of trans people is a culture invested in trans exploitation.

Trans is not considered an identity or a people, but a costume for the cis to try on, a tragedy to sniffle at, a myth to entertain, a spectacle to ogle. Even as cis and white supremacy loom larger than ever worldwide, so too does the burgeoning movement of trans artists telling their own stories and making them available for all. When we reject trans voices in favor of cis ones, we do so entirely by choice. Venerating Eddie Redmayne and Jared Leto while Angelica Ross and Jen Richards must distribute their own project online is absurd. Ignoring talents like Mya Taylor and Jamie Clayton in favor of cis men is malicious. Heralding cis men as stalwarts for trans progress while refusing to refer to Amandla Stenberg by their correct pronouns betrays the insidious, entrenched disrespect toward trans and nonbinary artists. 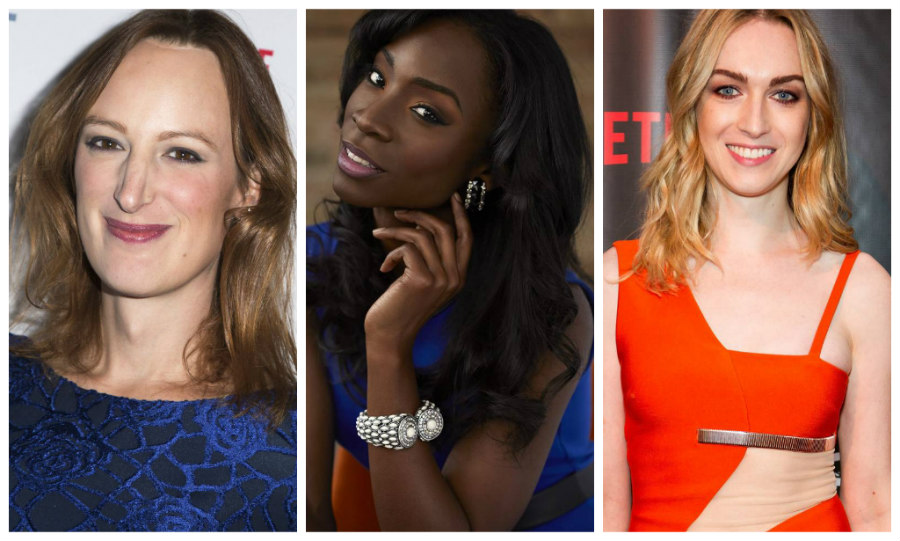 This stifling of trans creatives allows cis society to paint trans folks with any brush of their choosing. It’s how the pervasive myth of trans women as deceptive men masquerading as women persists, leading directly to brutal violence and killing at the hands of police, ashamed male lovers, and insecure, othering strangers. It’s why the defining trans issue of mainstream American politics is bathroom access, with conservatives reviving the morality and sex panics of the ’70s anti-gay public outcry, while trans homelessness, AIDS, workplace discrimination, and mental health access crises are completely ignored.

It’s how caring about transgender rights is framed as a class issue that only liberal politicos have room for—ignoring how transgender discrimination is steeped in sexist, classist, and ableist politics that uphold the very foundations of capitalism’s exploitative machinery. Trans people are struggling to expose and overturn the very fabric of a deeply dysfunctional society while cis people are debating whether or not they should respect our pronouns. When the cis discuss, define, and interpret the trans struggle amongst themselves, we are all diminished.

To see this play out in micro, look no further than the curious case of David France, a cis, white, gay man, who produced The Death and Life of Marsha P. Johnson, a documentary about the transgender Black femme at the heart of a police riot that gay men now celebrate yearly with police parades. Because simply turning Marsha’s legacy into an yearly assimilationist party wasn’t enough, France sought control of her whole narrative on the grounds that he and Johnson were close, personal friends. It soon emerged that France had not simply usurped a Black trans woman’s legacy, but a Black trans woman’s labor as well. Reina Gossett, the writer-director of Happy Birthday, Marsha!, claims that France took most of her content for his documentary. The sense of entitlement that France feels over Johnson’s story—given his disregard for those whose rights she fought for—is as utterly befuddling as it is vampiric. Much like Roland Emmerich’s revisionism of the Stonewall Riots, it is a painfully clear demonstration of how for the cis gay community, LGBTQ ends with G and comes with an invisible W(hite).

In a society swimming in anti-trans propaganda, we need trans stories more than ever—both for trans rights and collective liberation. Give transgender artists a chance. Read trans authors. Listen to trans singers. Hire trans talent, in front of cameras and behind and around. Support trans artists, pay trans creatives, and be the patrons to trans art so it can thrive even without mainstream support. And when you have enough faith in their talent and their stories, let them carry a project on their own instead of giving the most prominent and visible role to a cis man. For all the progressive hiring practices on the set of Transparent, it became the butt of a comedian’s greatest joke—winning an Emmy for stepping into a trans life. For the cis see only what they want to see, and they don’t want to see us as human.