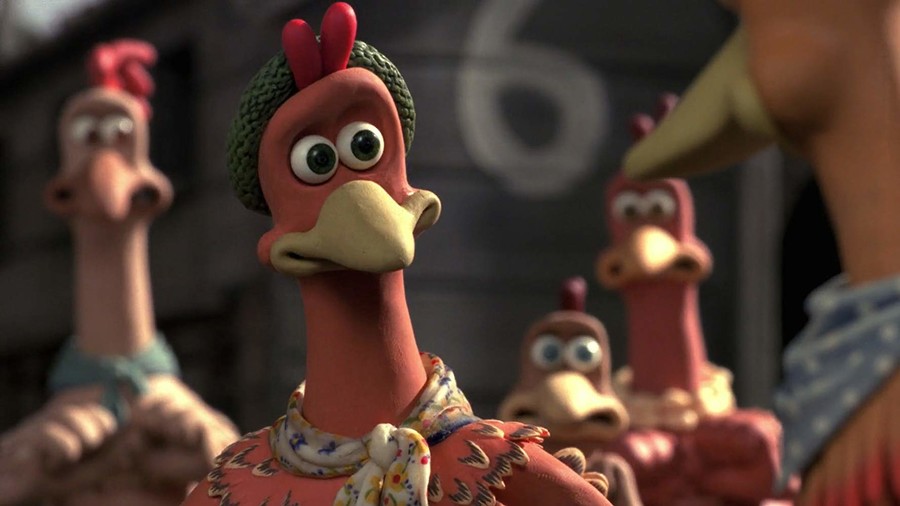 Chicken bones. When we perish all that will be left is piles of chicken bones. And, of course, plastic. Or at least that’s what the Smithsonian prophesied last December. After Popeyes updated its menu in summer 2019 with a record-breaking chicken sandwich this probably shouldn’t come as much of a surprise. In many ways. It feels like the end of the world is just around the corner: The climate crisis has seen rising global temperatures, sea levels, extreme weather events, and CO2/methane emissions, as well as the rapid loss of our animal species. We’re facing a mass extinction and it’s extremely, extremely gloomy.

So when the news broke that one of my favorite films would be getting a sequel more than 20 years after its theatrical debut, I held onto it tightly with both hands. Chicken Run hit theaters at the turn of the new millennium, mere months after we thought the world was coming to another imminent end thanks to Y2K, the pesky computer bug that promised technological torture. But despite the doomsaying, all was fine. And in June 2000, out hatched a stop-motion animation from DreamWorks that grossed more than $224 million, making it the highest-grossing stop-motion film in history.

Set in the United Kingdom, the heart of Chicken Run is Ginger (voiced by Julia Sawalha), a British hen who longs to be freed from the farm that’s holding her and her clutch captive. Her repeated escape attempts have been foiled time and again but, nevertheless, she persists—until one fateful day when a rooster named Rocky (voiced, unfortunately, by Mel Gibson) literally falls from the sky. Rocky’s impromptu crash into the hen house prompts Ginger’s next ambitious escape plan: She recruits the charismatic Yank to teach her coop to fly and, in doing so, inadvertently encourages a coup against the Tweedy chicken-farm empire.

Chicken Run’s plot is simple, linear, and easy for children to digest, but the film’s politics is its most savory aspect. Feminism, class warfare, global diplomacy, technology, and automation are all effortlessly kneaded into the story’s crust. “They’re organized, I know it,” says Mr. Tweedy (Tony Haygarth), peering out at the fenced enclosure where he imprisons the chickens. The collective action, organizing, and consciousness raising that Ginger employs with her chattering is a nod to feminist movements of past and present: the suffragettes of the early 20th century, the culture wars of the 1960s and ’70s, and the sharp-eyed focus on reproductive justice, economic determination, and escape from male violence that still captures the movement’s attention today.

For the Tweedy family, the entire worth of hens sits squarely between their legs, and their ability to produce eggs becomes a matter of life and death. To parallel, one flick through the patriarchy’s playbook will show how people with wombs have—for generations—been bound and reduced to their assumed biology and fertility. In Trump’s America, access to reproductive healthcare is being threatened, dislodged, and stalled as conservative states flirt with overturning Roe v. Wade through restrictive legislation. But Ginger’s bid for freedom isn’t just locked into a desire to escape: “The fences aren’t just in the farm; they’re in your heads,” she reminds her flock. Instead, liberation is only realized when the chooks gain full self-determination and autonomy over their bodies and labor.

“They don’t plot, they don’t scheme, and they are not organized!” declares Mrs. Tweedy (Miranda Richardson), who is both the brains and the brawn of the chicken farm and serves as the perfect foil to our hero. Where Ginger pedestals the collective good of freeing all the farm’s caged birds (“This is about all of us!”), Mrs. Tweedy is focused only on individual gains and hard profits. Her decision to foment an industrial revolution on the farm via a pie-making venture—“This will take Tweedy Farms out of the dark ages and into full-scale automated production”—has echoes of Margaret Thatcher’s stark 1980s industry reforms that prioritized privatized business and growth over people and their communities.

Mrs. Tweedy, like Thatcher, serves as a reminder that women can all too easily become foot soldiers for a capitalist patriarchy. Chicken Run successfully predicted the steep rise in industrial automation, and its undeniably gendered outcomes. A study by the McKinsey Global Institute predicts that by 2030, as many as 160 million women globally will be displaced from their current employment. In the United States alone, nearly a quarter of women will lose their current jobs because artificial intelligence is “automating away” administrative and customer-service roles largely filled by women.

But the movie clucks to a close on happy footing. The hens successfully hatch a plan to escape the clutches of the Tweedy family and their pie-baked fate; working together, they miraculously build a plane and escape to a distant island—a bird sanctuary—that offers freedom from the exploitative conditions of their industrialized hellscape. In many ways, the sanctuary feels like an expression of the queer utopia that still eludes us, though lesbian separatists tried to create them in the 1960s and ’70s with the now-endangered “womyn’s lands.” While such “womyn-only” communities were often mired in controversy, Ginger’s paradise is much more inclusive: The hens are joined by Rocky and Fowler (an elderly, militarized rooster voiced by Benjamin Withrow), as well as Nick (Timothy Spall) and Fetcher (Phil Daniels), a pair of slimy but helpful rats—all of whom have helped actualize Ginger’s vision.

Chicken Run isn’t without fault. The romantic arc between Ginger and Rocky is unnecessary. When Ginger faces trouble it’s Rocky who swoops in to save the day (twice!) and the tired trope dilutes some of the story’s key messaging. Perhaps it makes sense that the cock would be the weakest aspect in a tale that centers itself so proudly on the triumph of women. The film could have engaged with a broader critique of the American Dream that Rocky so aptly represents as an image of freedom and liberty—a shooting star in an infinite sky of possibility. But just like the fallacy that so many Americans cling to, Ginger’s vision of Rocky is exposed when she discovers that he was just an act—a circus trick, no less. He can’t fly; there’s no escape; and the joke is on her.

But Ginger’s dream isn’t an American one; and as she sets her sights on more radical horizons, she galvanizes the chooks into collective action. It’s the union organizing that best captures the film’s spirit. The scenes of chickens seizing back the means of production—their own bodies—are juxtaposed with the brutish bells and whistles of the Tweedy’s pie-making machinery in a Marxist crescendo of worker’s liberation. And it couldn’t be more important for today’s America. The American Dream sells the idea that hard work and persistence allows for upward social mobility, thus placing work at the heart of the American identity. But it’s all a facade—a way of keeping workers complacent in their own exploitation.

With growing discussions about the ethics of billionaires and the hoarding of wealth, America is waking up to dreary realities. Many of 2020’s Democratic candidates have declared support for the worker’s unions—Bernie Sanders plans to double membership!—in attempts to secure votes and remedy wage theft, exploitation, and hazardous working conditions that plague many American jobs. Empowering the union movement will be key to 2020, even if the GOP has other ideas. This was something Ginger was acutely aware of 20 years ago, making it all the more compelling to think about what she might have to say about today’s state of affairs.

But will we see a sequel before the earth bakes into piles of chicken bones and plastic? Chicken Run, if anything, offers an alternative to a desolate world that many of us are increasingly afraid of. Ginger and her chooks taught us that collective action, coalition building, consciousness-raising, and plucky persistence are necessary ingredients for a revolution—one that hinges on rethinking our current capitalist patriarchal design. To attain our own paradise, we’ll need to leave this crusty version of the world behind, and that sounds pretty gravy to me.