The Arab Spring in Retrospect“A Revolution in Four Seasons” Review

A lot can happen in four seasons, particularly when it comes to revolution and democracy. In A Revolution in Four Seasons, filmmaker and journalist Jessie Deeter—producer of Who Killed the Electric Car and director of Death By Fire—follows two politically active women for four years as the Arab Spring begins in their home country of Tunisia.

The film follows Emna Ben Jemaa and Jawhara Ettis, and their stories revolve around their experiences of the same political milestones. Jemaa is a tech-savvy activist who uses social media for social commentary and for educating and mobilizing her community. She envisions postrevolution Tunisia as a secular democracy. Ettis hails from a rural village and is a member of the Islamist Ennahda Party. She believes strongly in a Tunisia that is both democratic and true to its Muslim roots. Ettis eventually campaigns for—and wins—a parliamentary representative seat and is tasked with helping to rewrite Tunisia’s constitution.

The film conveys both women’s respective ambitions, belief systems, and activisms first and foremost, and this lens is a refreshing way to view their lives and aspirations. Deeter’s journalistic sensibilities shine here; the film gives both Jemaa and Ettis space to tell their own truths, allowing us to see them as smart, nuanced people working within their culture and feminist thought. Instead of pushing viewers to align with one over the other, Deeter fully recognizes that both women are complicated, just like the country they inhabit.

In these four years, their personal stories parallel each other as well. They both experience several major life events, including marriage and the births of their first children. Both women have to learn to balance their public and personal obligations and navigate societal expectations of motherhood and womanhood.

A Revolution in Four Seasons concludes by celebrating Tunisia’s achievements, including the drafting of a new constitution and the first free and fair elections since 1956. Tunisia’s story and struggle represents a success within the Arab Spring and the region at large, as it shows a country of social change and complexities learning to work together for democracy. It is a finale worth lauding. The film acknowledges Jemaa and Ettis’s tireless contributions to democracy and serves as an everlasting reminder that the fight for freedom is never over.

[QUEUE IT FOR LATER] 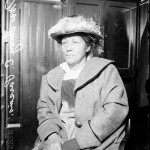