How Activists Took Care of Each Other After Charlottesville | Bitch Media

We Take Care Of Our OwnRadical Aftercare for Revolutionaries 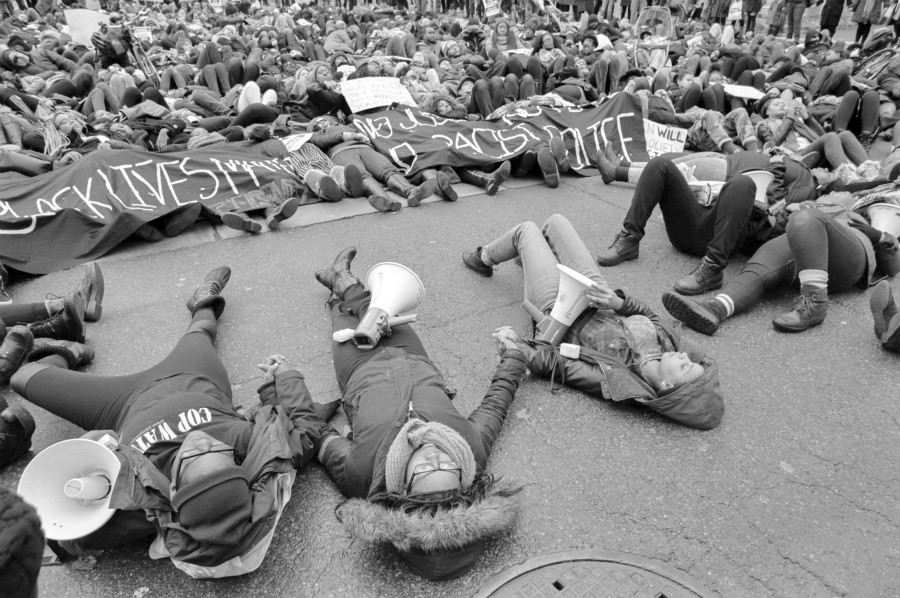 Smoke filled the air and pepper spray clouded our lungs as the neo-Nazis lunged toward us. Their movements were largely symbolic: Only a small handful dared to enter the melee outside of Emancipation Park, and those who did were heavily armed. The majority snarled and threw projectiles from the safety of their proscribed area as we—the counter-protestors—surrounded them, jeering. About a dozen feet away, an immobile line of Charlottesville, Virginia police officers watched idly as men in camouflage vests clutching assault rifles strolled by authoritatively. Now and then, a cry of “Medic!” would rise out of the chaotic din and street medics, a battalion in black with big red crosses stitched onto their clothing, would appear like magic. They ministered to the needs of all who asked—cleansing pepper sprayed eyes, helping exhausted bodies move to safety, handing out water, and later—once the screams came—saving lives.

The majority of the anti-fascists keeping the white supremacists at bay during August’s rally-turned-tragedy in Charlottesville, Virginia were people of color, women, queer, trans, nonbinary folks—people with the most to lose if the extreme right succeeds in their genocidal mission. However, save for Heather Heyer—who was portrayed as a victim instead of the brave freedom fighter she was—their efforts and labor were effectively erased by the media who chose to linger over fight scenes and flame-throwers, giving screen time to self-declared neo-Nazis, and brushing past the survivors of the carnage they wrought. The viral photos from that day focused on men wielding symbols of violence—weapons, shields, and fire.

There was no coverage of the aftermath: the healing, the care, and the compassion that are as crucial to the struggle as taking the streets or holding the barricades. As pasty fascists danced through the headlines and Richard Spencer’s dead eyes leered out of every homepage, those who’d stood against them were consigned to the ignominy of a presidential sideswipe. “Both sides” showed up; only one walked straight into a funeral. 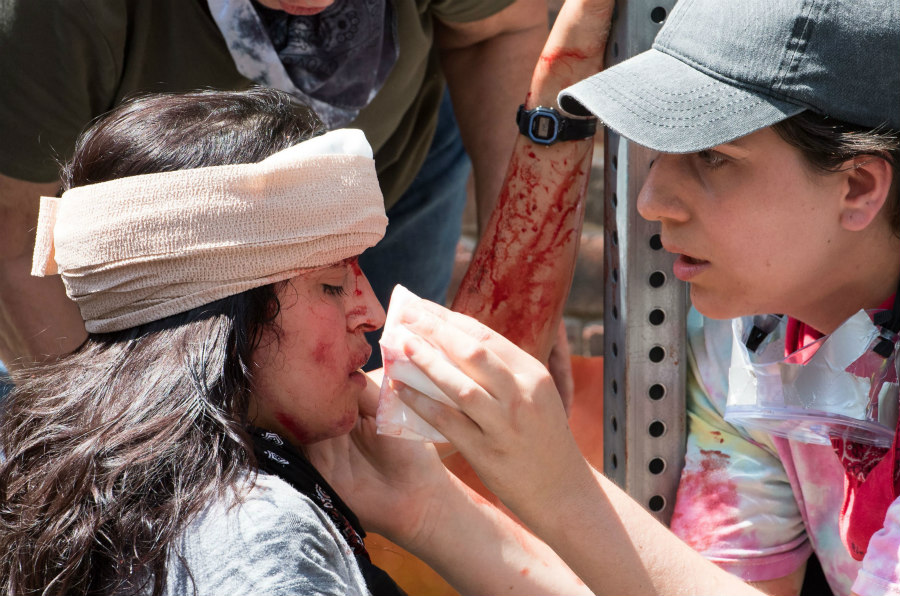 I was in Charlottesville. I was feet away from the crash, and three of my close friends were hit by the car. We are still dealing with the trauma and wounds we sustained down there. However, the way our New York City activist community rose up to support was incredible—and this is a pattern that holds true in every radical community. As soon as the news reached our comrades, they began organizing and marshalling resources, including a list of low-cost, radical-friendly mental health professionals and counseling services, and a crowdfunding effort to offset mental and physical health needs. Once we were all home, our compas arranged a decompressing solidarity evening with food, care packages, and music. There were a lot of hugs, a lot of tears, and constant check-ins. We were enveloped by their support, and made to know that even in the darkest of times, we were not alone. It helped to quicken our healing process.

“After Charlottesville, I felt immediately supported by femmes and gender-nonconforming folks,” Marisa, a NYC-based anarchist activist who’d witnessed the attack, told me over email. “Even though many were dealing with the emotional and psychological aftermath, they cared for others. I see this as evidence of our resilience and strength. But this work must be more distributed among other comrades. The work of care is for the whole community.”

There were no cameras capturing that response. No filmmakers lingered over the faces of the Charlottesville church elders, most of them women, who offered sanctuary, phone charging stations, and granola bars. No journalists interviewed the people who’d waited at the police precinct to provide support for the anticipated arrests, or the medics who’d risked their own lives to save ours. That didn’t fit into the narrative du jour—of perpetually antagonistic, eminently privileged, mask-wearing college kids who yearn for political correctness, ultra-violence, and not much else. If it bleeds it leads, and most media organizations have an excellent sense of the bait that will be irresistible to their audiences. 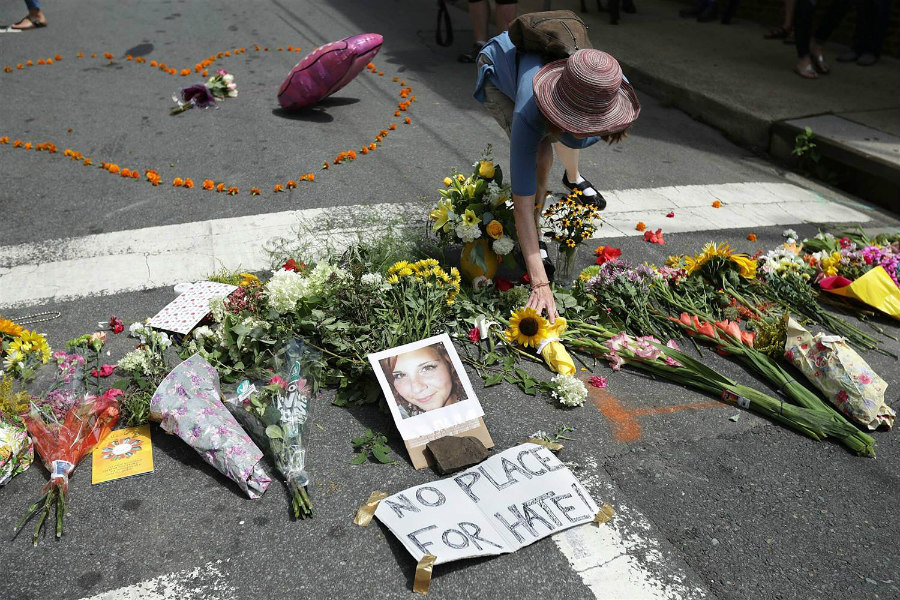 A masked phalanx of antifa facing down Nazis? Front page news. A group of gender nonconforming folks, undocumented people, and elders working to coordinate van rentals and safe lodging for several dozen people? Not so much. A dozen people of color and people with disabilities spending hours painting banners and flags? Nah. A group of cis and trans women organizing care packages and potlucks for people who suffered trauma post-Charlottesville? Forget about it. A highly trained, diverse collective of medical professionals who devote their time to caring for injured protesters? Maybe for the website.

Reducing anti-fascist activism to a series of splashy, scary caricatures dehumanizes those who stand up and fight oppression and the fascist creep, which is a wholly dangerous prospect for anyone who’s read a history book and knows what happened to those that the American state deems “inhuman.” To further marginalize Black, Brown, indigenous, queer, trans, gender non-conforming, women’s, and disabled bodies achieves the same result.

“People of all genders doing historically feminized support work, not just before and after clashes with fascists and white supremacists, but during—keeping count of their comrades, rinsing mace of their skin, keeping an eye on the cops and letting people know what may happen next—will never be glorified in glossy photos,” a member of an NYC anarchist feminist group told me. She’d been in Charlottesville too, and seen the real story unfold first-hand. “But antifascist actions literally can’t happen without them.”

Activism is a community effort. Before we take the streets, we hit the phones, email, Signal, and myriad other forms of communication to deal with the nitty-gritty organizing of mass mobilization: communicating with local groups to find out what kind of presence is requested and needed; sorting out rides; renting cars; securing housing; working out various self-defense and direct action strategies; organizing jail and court support; raising extra coin for the group bail fund; and making banners and signs for the day of—and that’s not even making sure everyone has enough water, sunscreen, and snacks. When one of us is arrested, the full force of the support network springs into action to provide support, therapy, care packages, healing herbal concoctions, job help, language classes, self-defense clubs, medical training, free food, dog walking, and other resources. Much of that labor is handled by people who rarely receive credit in the same the way the photogenic “white guy in a bandana” trope do. 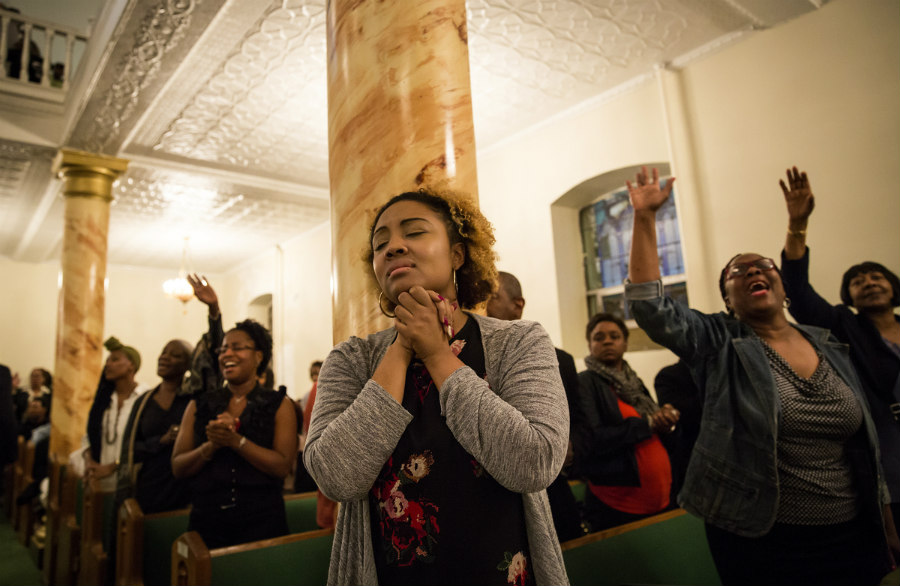 All of that planning takes a toll, eating up time and resources as well as individual people’s energy; it’s tiring, and often discouraging, especially when it all seems to be going unnoticed by those who benefit. “Right now, in our community, it’s safe to say that 90 or more percent of the work being done is by women, trans or nonbinary folks—yet, when there are complaints directed towards the organization as a whole, they are directed at the white men in our group, who are being perceived as the base of power,” a femme-identified organizer with NYC anarchist group MACC vents. “While that may seem like an appropriate place to place blame, it’s actually really maddening because it credits them with all the work we are doing. Why don’t people see that?”

This isn’t just about Charlottesville: It relates to J20, May Day, and every time that the people have expressed a response to societal oppression and summarily been quashed by state force. As cable news anchors howl bloody murder, the most marginalized continue to coordinate, to organize, and to protect one another, day in and day out—whether or not they get any credit for it. Without the boundless energy, enthusiasm, and dedication of marginalized radicals, there would be no actions to photograph. Whether it’s collecting shoelaces, cigarettes, and Metrocards to give people once they get out of jail, or cooking big vegan dinners for folks as they carry out letter-writing to political prisoners, or offering childcare when others hit the streets, it’s all necessary and valid. This is the fierce, radical care with which we support one another in the struggle. This is the beating heart of the liberation movement, the crux that sustained our forebears in every other revolutionary grassroots organization. Solidarity is our strength and our greatest weapon.

There are so many equally important ways to contribute to the resistance, so it’s lazy and genuinely damaging to see the media laser in on the same images of the same kind of people time and time again. To imply that the only kinds of people who can participate in direct action are those with the privilege and physical ability of an able-bodied cisgender straight white man is to discount the countless radicals and revolutionaries of different genders, colors, sexualities, ages, abilities, and legal statuses who paved the way beneath our feet with their own sweat and blood. We all stand on the shoulders of giants, but many of us have had to work that much harder to climb up to that point.

Surely the most marginalized groups—those who are fighting just to exist—deserve the most attention? Organizing meetings and mental health support groups aren’t as sexy as a well-timed Associated Press photo, but without them, our community cannot care for itself, and the struggle becomes insurmountable. Only by working together to support one another can we truly find liberation. The revolution needs our fire, but lest we forget, it also needs our care, and shoelaces, and Bandaids. Love is its own protection.