Beyond the Closet DoorRhea Butcher on Comedy Beyond the Binary 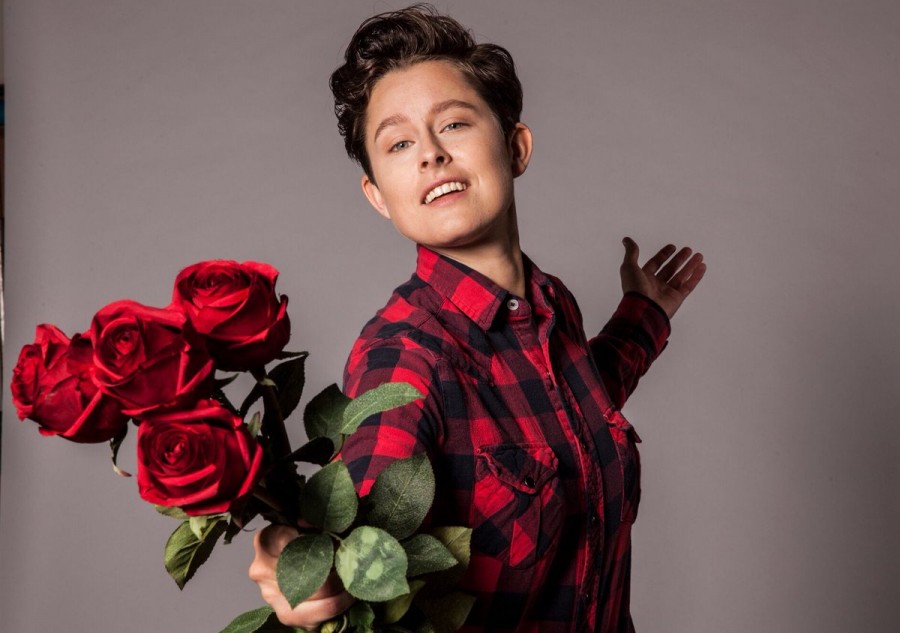 It’s the week before Cam (Cameron Esposito) and Rhea’s (Rhea Butcher) wedding on Take My Wife, and Rhea is having a crisis of confidence while trying to film a last-minute audition tape before the couple’s joint “butchelor” party. Dave (Zeke Nicholson), Rhea’s friend and fellow comic, notices Rhea’s anxiousness and comes to the rescue. “I got some apple cider if you wanna take the edge off,” he says, before giving Rhea a bottle of sparkling cider. “I’m auditioning to play a lesbian stand-up comedian and I can’t get any of the lines right and it’s basically me!” Rhea replies after taking a grateful swig.

While it’s easy to overlook Rhea choosing sparkling cider over wine, these character choices are not-so-subtle nods to sober viewers. Butcher, who celebrated five years of sobriety in May, understands that the LGBTQ community is particularly vulnerable to substance abuse. Lesbian, gay, and bisexual adults partake in binge drinking significantly more than their straight counterparts, according to the Centers for Disease Control and Prevention and the Substance Abuse and Mental Health Services Administration. (There aren’t statistics on alcoholism in the intersex and asexual communities.)

With alcohol companies marketing to the LGBTQ community (think Absolut Vodka floats at Pride) and gay bars often serving as community gathering spaces, sober LGBTQ individuals can sometimes feel excluded. That’s one of the reasons Butcher chose to weave these little moments about sobriety into Take My Wife, a heartfelt sitcom loosely based on their marriage to real-life wife Cameron Esposito. “We made a conscious decision to put [sobriety] in the show and not make a ‘very special episode’ about it,” Butcher explains. “You pick up on it because it’s your life, and you notice it because it’s important to you, as opposed to having a half-hour episode where we discuss the fact that Rhea doesn’t drink.”

In this way, Take My Wife intentionally departs from the dark and tragedy-filled portrayals of LGBTQ characters that dominate TV (See The L Word’s self-sabotaging Shane, Riverdale’s conversion therapy storyline, and the widespread Bury Your Gays trope). Instead, Butcher and Esposito have created a compelling slice-of-life sitcom that manages to address heavy topics like sexual assault, racism, and addiction with levity and compassion. On the surface, Take My Wife might sound like the traditional sappy sitcom with a live studio audience and laugh track, but the show doesn’t rely on comedic fluff.

“It’s not bubblegum pop or anything, but it’s also not very dark like a lot of shows have been. [The show is] still talking about big things, but we talk about them in ways that we can survive for 30 minutes,” Butcher says. This format has resonated strongly with viewers—and not just those in the LGBTQ community. Esquire wrote that the first season “captured human emotion better than any other show on TV,” and the show’s effortless mix of good-natured humor and complex identity issues kept it going after streaming service Seeso collapsed in August 2017. After fans campaigned on Twitter with the hashtag #SaveTakeMyWife, Butcher and Esposito distributed the second season through iTunes. Now, the show is moving to Starz.

Take My Wife’s focus on life after coming out is one of its biggest strengths. While coming-out stories are important, they’ve been told over and over again without any real nuance. “I get it,” Butcher concedes. “That’s intriguing if that’s foreign to you.” But it also gives the impression that coming out is the pinnacle of queerness. “For a lot of people, coming out is the first step on the rest of the journey. So if we’re only watching the walk up to the door, the door opens, and that’s the end of the story, you’re not really getting shown much of a road map for your life. You’re like, ‘Well, I came out! And now I really don’t know what to do!’” 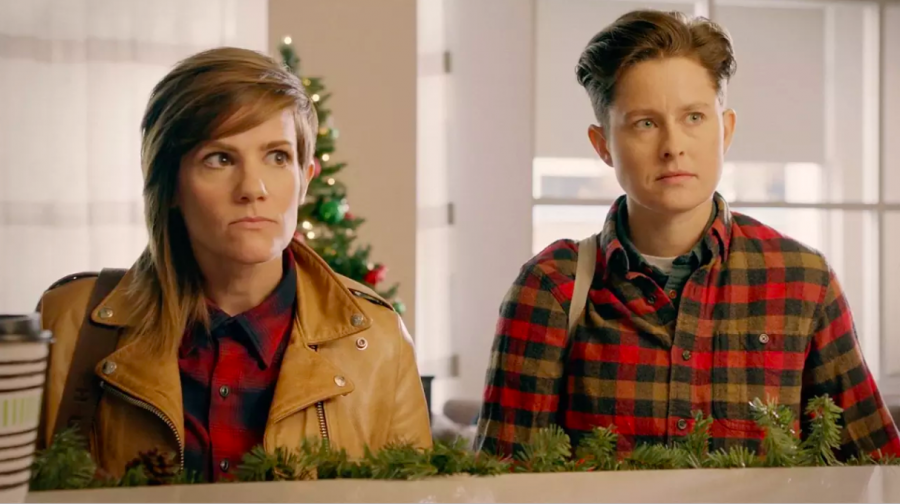 Butcher and Esposito also use social media to share snapshots of their domestic life. A playful argument over Esposito not knowing how to prepare ramen (spoiler alert: boiling water is required) even went viral. (“I’m in trouble about noodles,” Esposito captioned the video of Butcher’s exasperated reaction.) “A lot of times people say at my shows—or they’ll comment on my Instagram—that we’re their ‘queer moms.’ I really love that!” Butcher said. “We’re just trying to give each other some idea of what kind of life we can have.”

This need for visibility is exactly why Butcher has been open about their gender identity—even as it has shifted. In March, after Take My Wife’s second season was released, Butcher tweeted about coming to identify as nonbinary and deciding to use they/them/theirs pronouns. When I asked about the experience, Butcher singled out my phrasing:

“It’s interesting that you said ‘the decision to make a public statement,’ but you didn’t say I came out, and that’s kind of an important distinction. And that’s not to say that a person couldn’t come out as nonbinary, but for me, I didn’t feel like I was coming out. This is just my experience, which is that I decided to tell people, because I just wanted to have a little more clarity around what I’m doing. I just feel as though I’ve always existed outside of a binary and finding that as an identity made a lot of sense to me.”

While Butcher was initially wary about making a public statement, especially since they’re part of the historically anti-PC comedy world, they received an outpouring of support from fans and fellow comedians.

FYI I use they/them/their pronouns now

“Fuck ‘em, this comic has your back,” Kathy Griffin replied, while Twitter user @griddles83 wrote, “This description has helped bring clarity to my own identity more than you know. So thank you for putting into words, in a way that clicked for me, how one can identify WITH women whilst not necessarily identifying AS one.”

The validation that Butcher received from other gender nonconforming people reinforced their need to normalize the nonbinary experience. “A lot of people feel like they exist in between a lot of identities, and that’s a hard thing to describe to people,” Butcher says. “It’s very complicated, but that’s not a bad thing—it’s just that we happen to exist here. So that’s why I try to be very public about it. A lot of people in our community have felt this way for a long time.”

Here’s the conflict though: The fictionalized version of Butcher on Take My Wife has a different gender identity and uses different pronouns. While they wish there was a way to send a mass memo to everyone on their updated pronouns, Butcher says that the experience hasn’t been too disorienting. Most fans understand that the character is not an exact representation of them in real life. The Rhea reflected in the first and second seasons is simply in a different place—one the real-life Butcher honors as part of their own journey. “I don’t reject my ‘woman-ness’ or the experience that I’ve had being assigned female in my life, because I had that experience. It’s still part of me.”

Butcher would actually be fine with strangers using any pronouns to describe them but finds that other people tend to instantly try to categorize them “correctly” and often have strong reactions if they feel like they’ve guessed wrong. “The world that we live in is people trying to put everybody in a box, and there’s two boxes, and you can only fit in one of them,” Butcher explains.

So, what might all of these changes mean for a third season? “If we were to say, make another season,” Butcher says suggestively, “that season would probably be about me deciding to go by ‘they’ pronouns. It would be somewhere in there.”

The magazine that started it all celebrates 25 years of inspiring feminist readers and media consumers all over the world this year. Subscribe today and join readers the beauty, healing, and inspiration that is Bitch magazine.

Read this Next: In "Take My Wife" Cameron Esposito and Rhea Butcher Serve Up Charming Self-Awareness With a Side of Sly Pop Culture Critique 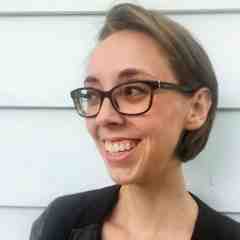 Katie Knepler is a Minneapolis-based writer and performer who is passionate about using comedy to explore queerness, gender, and mental illness. In between therapy appointments, she enjoys playing guitar, doing improv and doting on the backyard chickens. Follow her on Twitter @rebel_ghoul.

Capitalism Is a Cult, and You’re Already a Lifetime Member

Must Every Murder Show Revolve Around a Dead Girl?