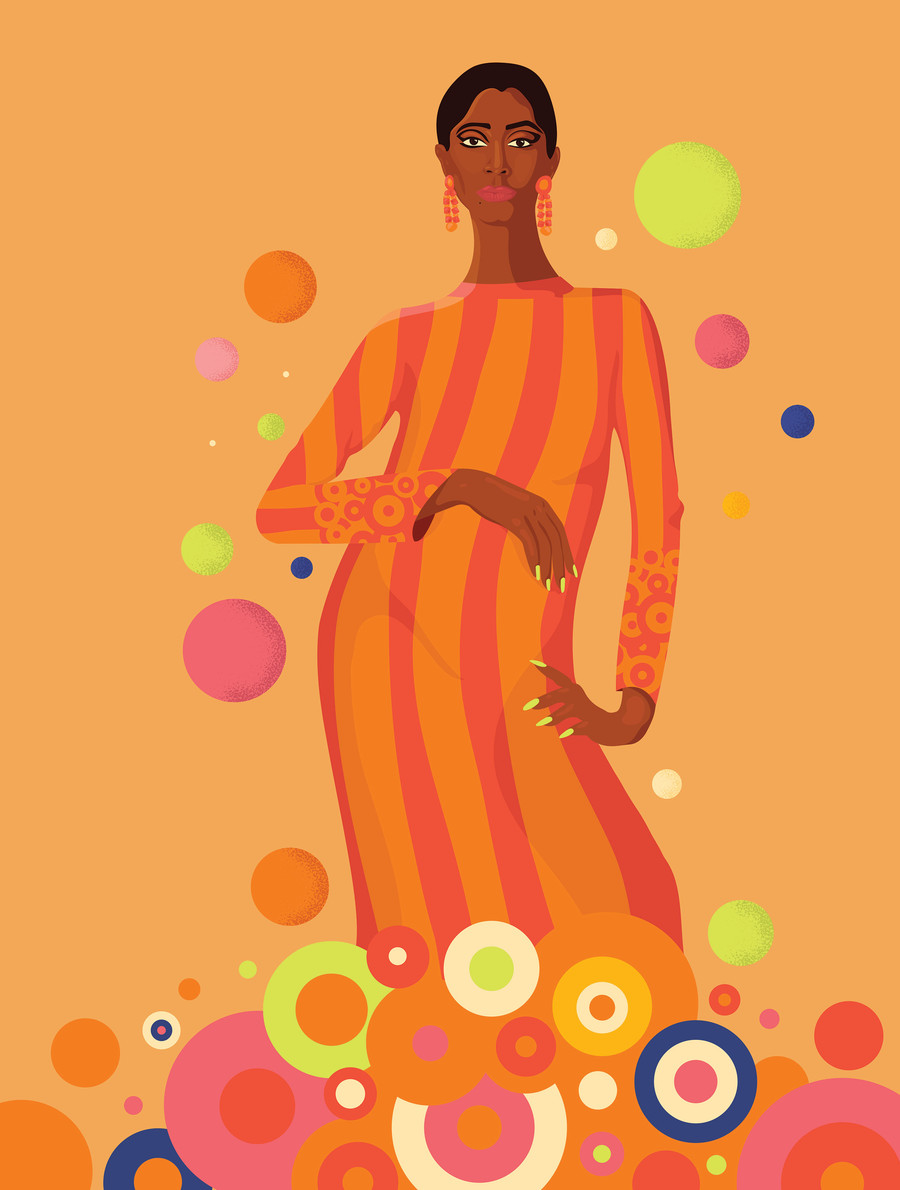 The history of glamour is, in part, the story of who gets to be considered glamorous in the first place. It’s only very recently that Black models like Iman, Naomi Campbell, and Winnie Harlow have broken through glamour’s color line to strut, sashay, and shantay. In the early 20th century, no one used the term “glamour” at all. Instead, actresses, socialites, and other public-facing women were “vamps,” a term that suggested a dangerous, devouring sexuality. But after 1925, when Swedish beauty Greta Garbo joined Metro-Goldwyn-Mayer, now known as MGM, “glamour” began being used to describe a new type of sexualized allure for white women of Northern European descent, rather than only “provisionally white” Southern and Eastern Europeans. It wasn’t long before glamour was, at least where the media was concerned, the exclusive province of “Nordic” beauties.

Glamour, as a product, brings together sex appeal, race, and the market. It’s a structure of enchantment that has tied sex appeal to consumption and whiteness. In 1939, Condé Nast founded a new magazine to capture this mix of white sex appeal, Hollywood allure, and fashion. The new magazine, Glamour of Hollywood, shortened its name to Glamour in 1943. By the mid-1960s, whiteness and glamour had become so entwined that it was nearly impossible for white audiences to conceptualize Black glamour in the context of white print culture. But in 1965, Black model Donyale Luna and fashion photographer Richard Avedon embarked on a historic collaboration for Harper’s Bazaar. The multiracial, light-skinned Luna epitomized elegance and long-limbed beauty. Avedon’s photos emphasized the model’s luminous eyes, high cheekbones, and languid movements, and forever changed what passed for glamorous in the high-end world of fashion.

Born in 1945 to working-class parents in Detroit, Peggy Ann Freeman had a dreamy, offbeat persona, along with arms and legs so long that, once she began posing for Avedon, he had to move his camera to accommodate her extraordinary proportions. As Richard J. Powell wrote in his 2009 book Cutting a Figure: Fashioning Black Portraiture, Freeman’s sister described her as a “very weird child, right from birth, living in a wonderland, a dream.” In high school, she was the last of the beatniks, hanging out at coffeehouses and using the name Donyale Luna, perhaps in reference to the era’s fascination with lunar expeditions. When the British photographer David McCabe, on assignment in Detroit, encountered Luna strolling down the street in her school uniform, he was entranced.

With McCabe’s encouragement, Luna moved to New York in October 1964 to begin her modeling career. He introduced her to Harper’s Bazaar editors, one of whom—the Chinese Portuguese model and editor China Machado—connected Luna to Avedon, one of postwar America’s most famous photographers. Machado’s own experience with Avedon—he’d launched her career at a time when, even with representation from the elite Ford Modeling Agency, she’d been rejected as “too Chinky” by Vogue, according to Robert Lacey’s 2015 book Model Woman: Eileen Ford and the Business of Beauty—made her confident that he would embrace Luna despite the industry’s overt racism.

The timing was perfect: Avedon was soon to guest-edit a special issue of Harper’s Bazaar on youth culture, and he was looking for ways to crack open the fashion magazines’ refusal to work with Black models. Avedon had previously tried, unsuccessfully, to raise money for the civil rights movement from the fashion industry. In 1963, by now frustrated with the fashion industry’s resistance to evolving, Avedon and James Baldwin, his high-school classmate and friend, collaborated on the antiracist project Nothing Personal, a coffee-table photographic polemic about racism.

The April 1965 issue of Harper’s Bazaar also showcased Mainbocher, the American designer who had made his reputation as a Paris couturier in the interwar years. But Mainbocher had veto power over who modeled his designs and refused to allow Luna to be photographed in them. “My customers come from Texas,” he explained in an interview in the 1970s. “To see a Black girl in a dress that they might wear is to absolutely end the possibility of their buying the dress.” Avedon then turned to the younger designer Norman Norell, who responded, “Out of the question.” Finally, Avedon secured designer James Galanos’s permission to have Luna appear in his elegant chiffon sheaths. In order to feature her even more prominently, Avedon asked designers Bill Blass and Pauline Trigère—who had herself broken the wholesale fashion color line by hiring Beverly Valdes as a house model in 1961—to make new garments for her to model. They used fabric made from the kinetic, optical designs of physicist Gerald Oster, whose work had recently opened at New York’s Howard Wise Gallery.

When Luna and Avedon began their collaboration, glamour was still a race-evasive code for whiteness, and they struggled to develop a visual and somatic vocabulary to connote glamour as epitomized by a model of African descent.

When Luna and Avedon began their collaboration, glamour was still a race-evasive code for whiteness, and they struggled to develop a visual and somatic vocabulary to connote glamour as epitomized by a model of African descent. Luna posed with Pop Art, moon suits, and other avatars of the “now” that situated her as an emblem of the present and, implicitly, the future. But the Galanos gowns also trafficked in primitivism—a set of racialized ideas that place Black bodies closer to nature and wildness—as though the designer expected that white audiences would not be able to understand Black elegance without references to what Avedon dismissed as “that noble savage business.” In one photo, for example, Luna crouches on all fours in Galanos’s tiger-print chiffon; in another, she claws at the camera in diaphanous leopard-skin.

Despite this primitivist hangover, Luna’s glamour stuns. Modeling one of the Blass-Trigère designs, Luna poses as an elegant figurehead, her long arms framing a sheath of striped organza that billows behind her. In another image, she arranges herself in a statuesque curve to model a silk floral Galanos sheath, her long legs at right angles. In these photos, Luna’s body is an aesthetic contact zone that, through silk, provides a sense of allure, vitality, and desire. She is breathtaking. Luna’s breakthrough on the lily-white pages of a U.S. fashion magazine was short-lived: The appearance of a Black model in Harper’s Bazaar upset advertisers, subscribers, and publisher William Randolph Hearst. The magazine barred Avedon from photographing Luna again.

Soon after, Avedon moved to Vogue, where he continued to work for the remainder of his career. Meanwhile, Luna decamped to the United Kingdom, where David Bailey photographed her for the cover of British Vogue in March 1966—the first nonwhite model featured on the cover of a major fashion magazine in North America and in Europe. By April 1966, her career had taken off, with assignments for Paris Match; Queen; and the British, French, and American editions of Vogue, among others. Sadly, Luna died of a heroin overdose in Italy in 1979. With Avedon, Luna navigated and reworked the meaning of glamour through a form of body politics that has had lasting significance, ensuring that the term was no longer a synonym for whiteness in mainstream fashion. Together, they remade glamour as a utopian possibility for Black women everywhere, even though the fashion, modeling, and magazine industries still have a long way to go in making an antiracist present.

Read this Next: The Devil Wears Cornrows 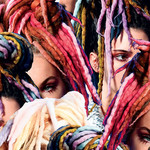 by Lauren Michele Jackson
A true reckoning of fashion’s debt might mean the end of houses, the end of fashion week, the end of “high” and “low,” the end of trend forecasts written by anyone who isn’t a 15-year-old brown girl from Chicago’s West Side. 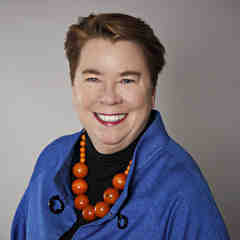 Elspeth H. Brown is a professor of history at the University of Toronto. Her research concerns the queer history of capitalism; the history of photography; and U.S. cultural history. She directs the LGBTQ Oral History Digital Collaboratory. Her most recent book, Work! A Queer History of Modeling, is available from Duke University Press.