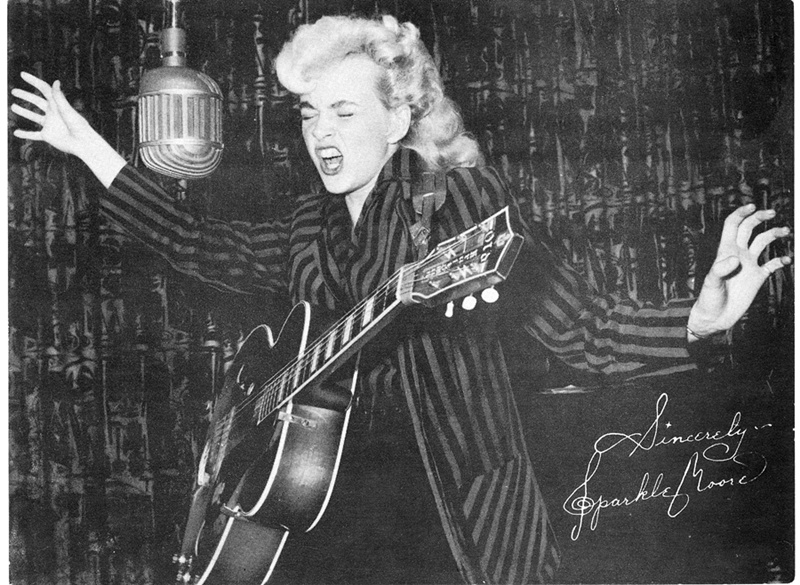 In 1956, 17-year-old Sparkle Moore roared onto the rock ‘n roll scene. She wore oversized men’s clothing and teased her white blonde hair up into a curly bouffant.

She styled her look after Sparkle Plenty, a wildly popular female musician in the Dick Tracy comic strip, but her voice was no joke. Moore’s music mixed the rockabilly king and queen—Elvis Presley and Wanda Jackson—with a ragged sound. She threw herself up into the high notes and dove down deep to the low. Sparkle Moore was a singer at ease with her talent and sex appeal; she was aggressive and unapologetic in an era that was defined by Doris Day and technicolor musicals. Her debut single “Rock-a-Bop” kicked off a US tour, followed by studio work on a sultry new song titled “Killer.” Shortly after its release, though, the momentum stopped: Sparkle Moore was pregnant, and left her music career to raise a family. Today, only a handful of her songs can be found.

Sparkle is just one of many women who choose to leave their profession and put their art on hold after pregnancy. Many of their stories vanish from the public eye and are lost to obscurity, but others refuse to go down quietly.

Screenwriter Diablo Cody’s new comedy, Ricki and the Flash, is the story of a woman who takes a different path when art and family collide. Meryl Streep stars as Ricki Rendazzo, an aging musician who rejects the stereotypical expectations of motherhood. She’s the rock 'n roll frontwoman for The Flash, a local bar’s house band. On stage, she swaggers and belts out cover songs, holding a faithful audience in the palm of her hand. 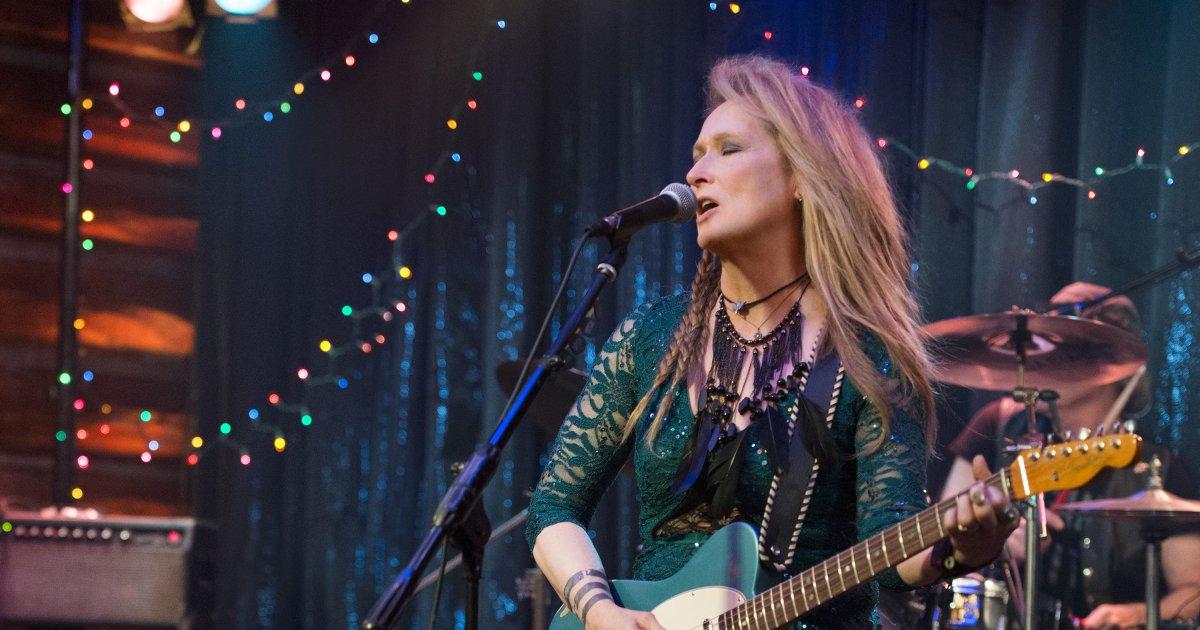 Ricki hasn’t met with blazing success—she plays cover songs at a bar, lives in a two-room apartment, and covers her bills with a day job as a cashier at a Whole Foods-esque hipster haven. She’s living paycheck to paycheck, and other than The Flash’s adoring lead guitarist (Rick Springfield), Ricki is completely on her own. It wasn’t always that way, though, and an emergency call from her ex-husband Peter (Kevin Kline) jerks Ricki back into the life she left behind. Their daughter Julie (played by Streep’s real-life daughter Mamie Gummer) has just been abandoned by her unfaithful husband and is nose-diving into depression. She refuses to shower, eat, or change her clothes. Despite the fact that Ricki hasn’t seen the family in years—and even missed Julie’s wedding—she’s called in as a last resort.

Ricki reluctantly journeys back to Indianapolis and reenters the lives of her now-adult family. But there’s no warm welcome for her. The life she lives now, rocking out with her band in the evenings and living in her own apartment, came with a steep price tag attached. Ricki left her family to pursue a musical career when her children were teenagers. She set up a new life for herself in California and never looked back.

Streep’s performance explores the complex emotions of a woman who loves her life and art, but fully recognizes that her children will never forgive her for leaving them behind. Her unhappy body language and struggling expressions speak volumes: Ricki, glamorous and glitzy on stage, slinks around her family like a nervous teen. Her eyes dart and flicker, unable to hold anyone’s gaze; her shoulders hunch; she titters during nervous moments, and even her smile is apologetic. There is a price to pay for leaving family and Streep’s sensitive portrayal illuminates a character who could be difficult to empathize with—a mother who abandons her children to pursue a dream.

Diablo Cody has told interviewers that Ricki and the Flash was inspired by her own rock musician mother-in-law, and it carries a maturity that her earlier films lacked. The continual cocky speeches spouted by confident characters in Juno have been replaced by anxious, adult remarks by characters confronting the raw reality of their choices. Youthful bravado has aged and painful uncertainty has taken its place. Despite that, the movie ends in a syrupy sweet reconciliation. A more tentative ending would have been the more honest and bittersweet way for this film to go, but instead we get a rather artificial-feeling belly of saccharine.

On the other hand, happy endings after difficult sacrifices aren’t impossible. In 2010, 73-year-old Sparkle Moore released a new album after decades of silence. She might have disappeared from the music scene in ’57, but she had never stopped creating. Her new album is a homemade affair with garage-band production values, but it’s also a new chapter in the continuing story of a woman who refused to stop making her music.

Sparkle will always have the joy and experience of raising her children despite the criticism that it cost her a career. Ricki will be able to return to her music and fans at the bar in California whether or not her family embraces her. For both women, balancing a musical career with the needs of a family was impossible in a way that few men face. On stage, Ricki rails against the burden of the double-standard, calling out famous male musicians who have children with different women but face no condemnation. No one, she points out, expects those men to give up their music and settle down.

Related Reading: Jenny Lewis discusses writing the songs for Ricki and the Flash. 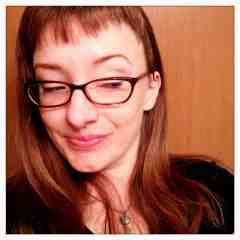 Catherine Eaton is a writer living near Chicago. She write cultural critiques at The Stake, a pop culture blog. Follow her at @sparrowpost. 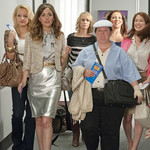 by Evette Dionne
You can sing along—silently—and keep your head on straight.