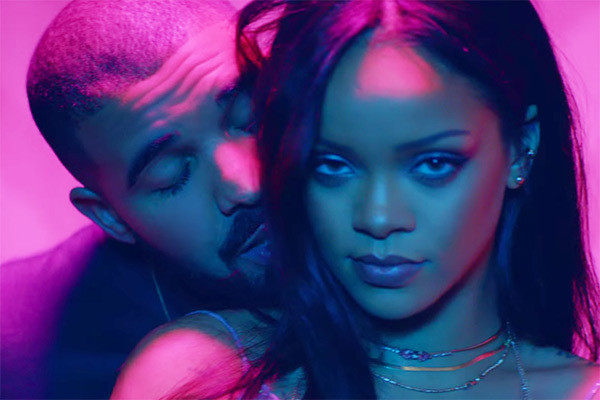 Rihanna and Drake in the “Work” video (Screenshot from YouTube/Rihanna)

The biggest story of the 33rd-annual MTV Video Music Awards was inarguably Beyoncé’s haunting performance of songs from her magnum opus Lemonade. Subtly invoking both #BlackLivesMatter and the feminist movement as a whole, Beyoncé left it all on the VMA stage. But coming in at a close second was the fervent last-minute speculation about a possible marriage proposal from Drake to Rihanna, the night’s Video Vanguard honoree. Drake was absent for most of the show and wasn’t present to collect the award he won early in the night for Best Hip-Hop Video, which he won for “Hotline Bling.” But he turned up at the end of the broadcast, impeccably dressed and grinning like a lovesick fool, to present Rihanna with her award.

A rumor that he would propose spread like wildfire on Twitter when he was finally spotted at the venue, and the viewing audience collectively held its breath waiting to see if he would ask Rihanna to make an honest man out of him. Thankfully, he didn’t. But I almost wish he did. Truthfully, I’m pleased Drake didn’t propose. I’m not a fan of attention-seeking men making women’s professional accomplishments about themselves. But just for a moment, the idea of Drake publicly adoring the Black woman he loves was enticing enough to make me forget that Rihanna has made it very clear, on several occasions, that she doesn’t love him back.

So many Black women are asked to settle for scraps of affection, and we often forget that we are worthy of so much more. When society continually insists that Black women are undesirable, the prospect of having an internationally recognized Black woman be seen as worthy of a public gesture of love was almost intoxicating. Representation matters, and with the fraught sexual history of Black women, it is important for us to be able to see images that show us being fully loved and appreciated instead of simply as objects of lust. Pop culture is so full to the brim of narratives that reinforce the idea that no man would proudly claim a Black woman as his love and equal partner that it’s easy to feel like Black women are singularly undeserving of love and adoration. Even Eartha Kitt spoke publicly about her difficulty dating intraracially due to the prevailing idea that a Black woman had little to offer a man on the rise.

Despite my pipe dream that The Almighty Rihzus will eventually settle down with a wealthy oil tycoon who will appreciate her majesty, there is something aspirational about the way Drake treasures her so openly and without shame. He welcomes the jokes at his expense and endures the mocking taunts on social media because it matters more to him to be public about his affection for her in all her bad gyal glory. To hear pop culture tell it, no man has ever unabashedly loved a Black woman without “taming her” first. It’s significant to have a Black woman who embraces her inner “savage” be acknowledged as the prize that she is: beautiful, successful, ambitious, and not at all in search of a partner.

Admittedly, that’s a lot of pressure to put on an imaginary ring and a proposal that never even happened. But the images we create about each other speak volumes about who we think has value in society, and it would have been wonderful to see a Black woman centered in this way. After a very public brush with domestic abuse back in 2007, Rihanna has been notoriously coy about her dating life. It’s an understandable development after having horrific images of herself published internationally without her consent. Relationships are always hard, but they’re doubly hard when millions of prying eyes are hanging on your every move. Something tells me that when Rihanna finally finds the man she wants to spend her life with, we won’t hear about it until after they’ve been together for years. For now we’ll just have to satisfy ourselves with #Aubrih’s annual “We’re on tour so please pay attention to us” romp and settle for the way that Jay Z looks at Beyoncé.