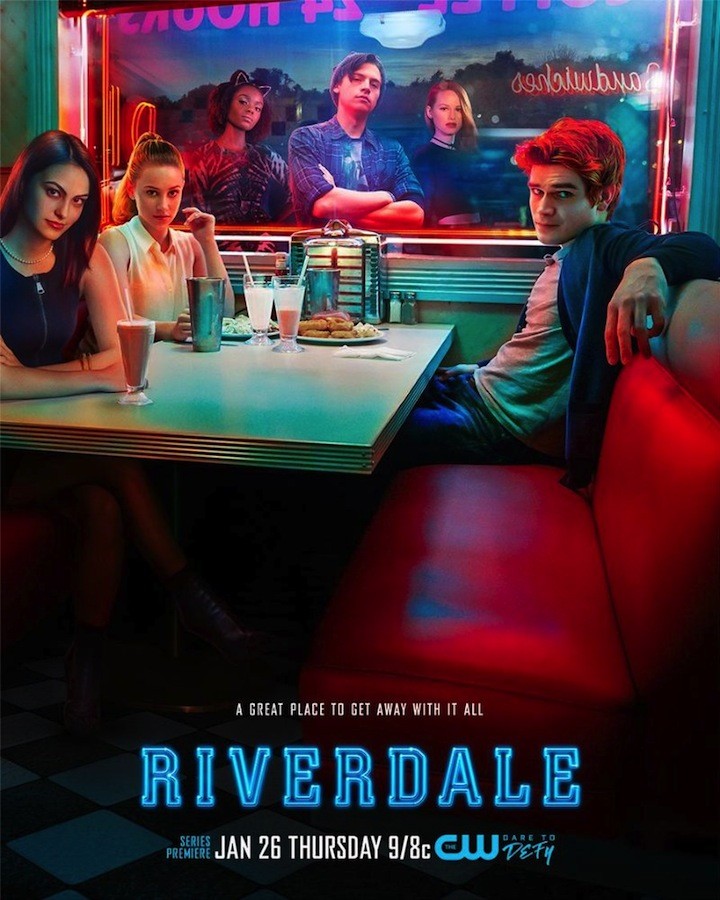 Last week the CW blessed us with a slick new adaption of the Archie comics, transporting Archie and friends to a much darker and twistier Riverdale than the original series setting. Sure, the gang’s all here and the kids are still hanging out at Pop’s Chocklit Shoppe but in addition to navigating the social logistics of football try outs and back to school dance dates, there’s a sexy, sexy murder to solve! Specifically the murder of creeptastic twin Jayson Blossom who disappeared while on a boat trip with his sister Cheryl.

BA: I really liked the mix of campy comic book aesthetic with the murder mystery set up—a kind of hard candy noir. The class conflicts and heavy literary references reminded me of Gossip Girl and early Pretty Little Liars in a good way. I would definitely watch the second episode.

DGH: It was Pretty Little Liars meets Twin Peaks right away for me—in the best way! I will watch anything with moody teens brooding about murder and romance at their local diner. It’s not at all what I thought I was going to get from a television show based on a comic series that began in the ‘40s, but I’m happy to be surprised. Hard candy noir is a great way to describe it.

BA: I was delighted and intrigued by the saturation of literary pop culture references. I read a piece on Vulture calling out the most unrealistic lines for teens and it was hilarious. But given that shows like Gossip Girl, Vampire Diaries, and Pretty Little Liars looooove a literary/classic film reference and often use them as easter eggs combined with the fact that high schoolers are often assigned these books as required reading I thought the volume of referential material made sense.

DGH: As far as I’m concerned, there can never be too many Mad Men or Truman Capote jokes, and I’m glad that teen audiences agree.

Even though I’m a grown-ass woman, I yearn to live in the world of teen dramas. The outfits! The inside jokes! The part where no one seems to do homework but has read every cool book and watched every cool movie! I deeply regret that I will never again feel the surge of adrenaline that hits when the bottle lands on someone you like during Seven Minutes in Heaven. I experienced all these things while watching Riverdale.

BA: Also, the soundtrack was great!

DGH: The soundtrack was like a mix-tape from your high school dreamboat.

BA: Veronica’s cape! The efficiency with which the writers seemed to handle what would normally be drawn out character arcs: Veronica and Betty become friends and allies really quickly, Betty confesses her feelings for Archie and he tells her (in a kind of punk ass way) that he doesn’t feel the same. Archie and Ms. Grundy resolve their affair and agree to keep their secrets secret and work on Archie’s music career. Betty gets life advice from Toni Morrison! I found it to be a really satisfying mix of ridiculousness and good narrative choices that moved the murder mystery to center stage. Also, clearly some kind of love declaration or betrayal has happened between Jughead and Archie, and I’m down to follow that relationship thread.

DGH: I liked seeing how quickly Veronica and Betty became friends instead of wasting time on them battling over Archie upfront. I read the Archie comic books as a kid when my mom wasn’t looking (she objected to the kissing scenes) and was really pleased with how well-cast the show is—you can practically see the comic-book faces superimposed on the actors’ bodies. Betty and Veronica are perfect. Archie seems much smarter than I remember him, but that’s okay. The casting also has a nice touch of teen drama nostalgia: Betty’s mother is played by Mädchen Amick, aka Shelly from Twin Peaks, and Archie’s father is played by Luke Perry, aka Dylan from Beverly Hills, 90210! I absolutely love Jughead as the mysterious Gossip Girl-esque voice-over narrator of all the Riverdale kids’ misdeeds. And yes, give me a good cape any day!

BA: Loved that Josie and the Pussycats shut Archie’s request for musical collaboration down and asserted their commitment to their own work. But then their first performance was a cover of the song the creepy Blossom twins were supposedly conceived to. And so far the most visible POC roles in the show seem to be service/entertainment oriented which is not okay in terms of casting.

DGH: So bored by Ms. Grundy and Archie’s affair! Why does every teen show have a teacher-student scandal? Aria and Ezra on Pretty Little Liars was too much for me even in season three and then it kept going forever, and remember when Dan slept with a teacher on Gossip Girl? Stop this, teen shows!

Love to Hate it

BA: Cheryl Blossom is TERRIBLE in all the ways I want a high school queen bee villain to be terrible. Her hair is fantastic and her heart is a pea-sized lump of coal. Also, I love to scoff at the high level of instant expertise that these teens have: Archie got through his summer construction job by composing poems in his head! But then he realized they were really songs! And he’s found his calling! And made a demo! In one night! And it’s good! Luckily, Ms. Grundy, the school music teacher is Julliard-trained. Shenanigans.

DGH: Cheryl Blossom was born knowing the meanest possible thing to say in every situation.

BA: There’s something extra-vicious about saying the meanest thing possible while wearing an adorable cardigan. It’s so disconcerting!

DGH: Given that she was wearing matching-white outfits with her twin brother the day she (probably, this is purely speculation on my part!) shot him, of course an adorable cardigan is chilling.

Hopes for the future

DGH: Really want to know more about Jughead and Archie’s past, and I would greatly enjoy a few well-placed Twin Peaks references in the dialogue. We definitely need more Josie and the Pussycats. Can they get their own spinoff?

DGH: My money’s on Cheryl. Her outfits are sinister and symbolic.

BA: Totally. I’m thinking either botched twincest suicide pact or straight up murder. The sartorial signs are clear: Cheryl is up to no good!