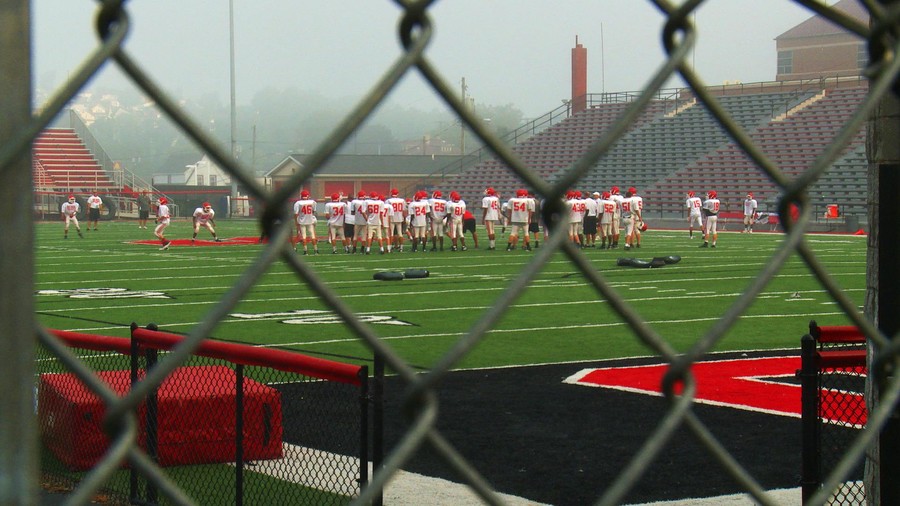 The opening frames of Roll Red Roll make it clear that this documentary about a heinous rape takes a very different tack than previous (and excellent) docs covering the same subject, like 2016’s Audrie and Daisy and 2015’s The Hunting Ground. Airing tonight as part of the POV series on PBS, Roll Red Roll explores the notorious Steubenville, Ohio rape case, but the film focuses less on the incident itself and more about how it affected both the surrounding community, and our culture at large.

But first, that opening scene: The camera drifts along a quiet, nighttime street, a scene that would be almost bucolic but for the audio overlaid. Brash, drunk, masculine voices giggling and chortling to each other, distorted and tinny; their tones are enough to make a viewer tense up, to feel a fight-or-flight response kicking in.

“What did they do to that girl?”

“She is so raped right now.”

It was August 2012 when 16-year-old Jane Doe went to a party. At that party, so intoxicated that she was nonresponsive and utterly unable to consent to sex, she was raped by two Steubenville High School football players, Trent Mays and Ma’lik Richmond. That series of events repeats itself all over the United States on a weekly basis, but something about this case was different. Her rapists, as well as other people around her, documented it. They took photos and video. They tweeted and texted; they published photos on Instagram. Their posts included hundreds of explicit, crude, and misogynist comments.

The massive digital footprint they left includes the video sampled at the start of Roll Red Roll . The full video is long and extremely difficult to watch, and in one of its most heartbreaking moments, a a young man repeatedly and vocally identifies what is happening as rape, and knows that it is wrong, but seems uncertain about what to do, while the others giggle about the “dead girl.”

Jane Doe’s rape went viral at a moment when American society was on the cusp of a major reckoning with social media, and the story was widely disseminated  in part because of a crime blogger and former Steubenville resident named Alexandria Goddard. Goddard meticulously assembled the evidence—which indeed became evidence that was heavily used at trial—to create a detailed timeline of the events of that night. The vast trove of graphic and horrific material, as well as the shockingly indifferent distribution of it, was jarring enough that it opened up a conversation about rape culture that brought the term into the mainstream.

The name “Steubenville,” for much of the United States, has become a shorthand for a watershed cultural moment. While some of its details may have faded, many can at least remember that it was the first rape case where the perpetrators were so brazenly self-assured that they would never be held accountable for their actions that they took pictures and shared them on social media. It’s this cultural phenomenon that Roll Red Roll director Nancy Schwartzman explores, making generous use of found and archival footage, interviews, and eerily serene long pans through the Steubenville of today. It is a visually jarring film and an unflinchingly explicit one, save for one thing: It very diligently screens Jane Doe herself from view, declining to make her identifiable and ensuring that her real name is never disclosed. Her absence, far from being a dehumanizing lacuna, instead cuts directly to the theme of the film: Rape is an intimate, violating crime that has a ripple effect on everyone around it. Schwartzman adroitly turns the true-crime genre on itself, making it less about fetishizing crimes and their victims and more about looking at how those crimes—and accountability for them—affect larger communities.

Roll Red Roll adroitly turns the true-crime genre on itself, making it less about fetishizing crimes and their victims and more about looking at how those crimes—and accountability for them—affect larger communities.

Steubenville is the sort of town that people mean when they talk about the mythical “white working class” Midwest and the supposedly salt-of-the-earth people who live there. It is 80 percent white, and in decline. The town’s residents, according to Roll Red Roll, worship two things: God, and high-school football—and not necessarily in that order. That’s what makes the Steubenville case so remarkable: Not that two high-school football players raped Jane Doe, but that they were ultimately forced to answer for it. Not, however, before it tore the town apart, with coaches, parents, students, football fans, and other residents ardently closing ranks behind beloved athletes while others, like the police chief and residents who believed reports but feared speaking out, wanted to ensure that justice was done.

Once the case exploded into the public consciousness, Goddard and others reporting the story experienced unexpected and intense scrutiny—and harassment. “Hacktivist” collective Anonymous, meanwhile, used its online clout for real-world involvement: Members worked to keep the case in the news and make it clear that they had no intention of dropping the subject. By throwing Steubenville on the map, Anonymous showed survivors everywhere that someone was listening, and soon enough a surge of survivors began showing up in Steubenville to protest, contact local officials, and tell their own stories.

Roll Red Roll explores all these things in a narrative that turns the lens onto the larger cultural discourse about sexual assault and accountability. Its themes—including the use of social media, the expectation that rapists will not face repercussions for their actions, and a community’s resistance to truth—continue to repeat themselves, amplified by a media that too often buys into stale myths. Advocates still fight for more accuracy and less stigma in coverage of sexual assaults; yet coverage of many high-profile cases make identical mistakes over and over. Survivors continue to experience shaming and blaming, and are also accused of “ruining” the future potential of those who assaulted them. The woman raped by Stanford student Brock Turner in 2015 read a fiery, moving victim statement at his trial; he received an astonishingly light sentence and the media’s headlines and coverage, even after his sentencing, focused more on the tragedy of his promising athletic career than it did on his crime.

Confronting the way we talk about rape is a timely topic. The President of the United States has been accused of sexual assault by more than a dozen women, and has even bragged about it on video, while sites like Facebook and Twitter are struggling to contain a firehose of offensive content, including livestreamed crimes. Recent years have also seen outrage over light sentences for rapists who, like Turner, come from privileged social and cultural classes; as well as tentative interest in restorative justice and the possibility of reckoning with crimes via means other than the conventional justice system. These conversations have in part been made possible by social media itself, which enables activists to mobilize quickly to change narratives; pundits and outlets who perpetuate shaming and inaccuracies, or treat perpetrators like victims, are in for a ratio.

Roll Red Roll is an intense, provocative look at modern iterations of rape culture, and how becoming the home of an incredibly high-profile crime can reshape a town forever. It is also a sharp examination of the world we have created for ourselves through social media, leaving the viewer to think about how to address this monster of our own making.

Read this Next: Everything You Really, Really Didn't Want to Know about the Steubenville Rape Case

by Andi Zeisler
Unless you’ve been living under a rock, you’ve heard something or other in the past month about a horrifying gang-...