Roxane Gay’s “Hunger” Will Satiate YouOn Fat, Trauma, and the World of Longing 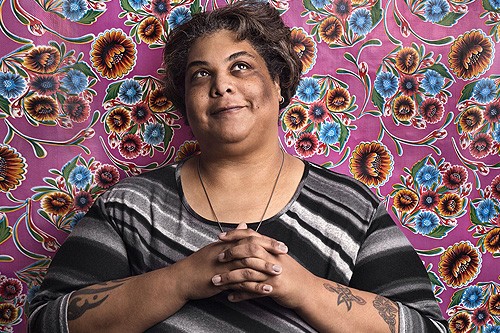 Roxane Gay writes all kinds of things. After her last book, Difficult Women, a collection of short stories, Gay returns to nonfiction with her memoir, Hunger, 300 pages of stunning vulnerability.

Hunger is one of the many stories from Roxane Gay, and it might be her most memorable. It is not a literary device for symbolism. There are no euphemisms or guessing. Gay’s signature intensity arrives in unadorned prose; rows and rows of structurally modest sentences originating back to the gang rape she endured as a 12-year-old and the decisions to transform her body over the decades by overeating and deliberately gaining weight in order to protect and soothe herself. There are no lyrical take-offs or fancy-shmancy anything. Gay chooses the only language that makes sense to address brutal trauma and the unending, socially accepted cruelty targeting fat people: simple, directive, and cornering.

There are two harms narrated throughout Hunger, one preceding the other.

I am tracing the story of my body from when I was a carefree young girl who could trust her body and who felt safe in her body, to the moment when that safety was destroyed, to the aftermath that continues even as I try to undo so much of what was done to me.

Any person who follows Gay on Twitter, or has read Bad Feminist, or can infer from Untamed State, knows she suffered a violence that, in its detail, cannot truly be understood. While Gay has written about “becoming the girl in the woods” in previous work, this is a longer meditation on rape, but it doesn’t—and doesn’t need to—zoom in on the details of what happened; it focuses on the impact of loss and being lost. Readers are shown a room of survival that Gay has created since she was 12 years old in which food provided a way to comfort herself, and a blueprint to build a “fortress” of safety. Gay explains that to become large would mean to become undesirable and therefore safe but, instead, she receives the ironic inverse: She gained weight to become invisible, but the more her body grew, the more visible and vulnerable to harassment and further trauma she became.

I was swallowing my secrets and making my body expand and explode. I found ways to hide in plain sight, to keep feeding a hunger that could never be satisfied—the hunger to stop hurting.

Hunger is all that underlies cruelty. The cruelty of adolescence and disappearing innocence. The inhuman cruelty of rape. The cruelty of bystanders and participants, lovers, jokers, and drunks, teachers and strangers, no ones and every ones. Hunger breathes secrets of self-hatred and shame that will resonate with any reader with a beating and open heart. It is an outcry against the socially permissible cruelty toward people who are overweight, fat, obese, and morbidly obese. In the darkest parts of the book, Gay rightly underscores societal obsession with superficiality as we embrace social paradigms that equate personal happiness with thinness and mercilessly punish those who cannot, do not, or choose not to conform.

There are two bodies of Roxane Gay. There is the widening body of her work; an impressive refusal to stick to one genre as she moves fluidly between them, including comics and screenwriting (Gay is writing the movie adaptation of An Untamed State). And then there is the  physical person of Roxane Gay, which she offers in Hunger for the public’s gaze, cheap shots, curiosity, and scrutiny. She allows us in and for more than 80 blink-like chapters, we are allowed into her world, and even though she says she’s not here for the admiration, it’s impossible to witness such a literary move and not remark that it’s just a hell of a thing to do. There is more than hunger at play; it’s more than surviving rape, it’s more than enduring the continuous shame when the world repeatedly chooses not to accommodate your person. What kind of accolade do you offer a writer who actually uses writing in the way writing was intended?

I was broken and then I broke some more, and I am not yet healed but I have started believing that I will be.

Hunger taps into psychological and spiritual brokenness at the hands and minds of others, and Gay consistently points to the deeper: the unchecked, habit-forming, nonthinking corporate messages that women, still in 2017, must be thin, polite, smiling, smooth around the edges, yes-saying damsels for others in order to matter, in order to be deemed worthy of understanding.

This is a story you cannot put down, a story that won’t leave you. Gay asserts in the book’s first pages that this is not a story of triumph—meaning it’s not about overcoming the “problem” of her body, or fat. There is no glorious, “I DID IT!” ending with before-and-after photos. What Hunger does do, though, is position and prompt the reader to ruminate on what truly defines their most intimate desires. It also shoves back and maybe even rocks the weight-loss industry a bit by calling out its bullshit. Hunger makes anyone who has ever projected a narrative onto someone else’s body pause in complicity. If Hunger helps someone take a moment to be real, lower their guard, and reflect for a moment on the fact that maybe, just maybe, this memoir isn’t just about Roxane Gay, and consider their own contribution to the toxic pollution for rape survivors and fat people, or maybe someone stops thinking they know the story of someone else’s body?

That is a triumph beyond measure.

“Dear obese PhD applicants: if you don’t have the willpower to stop eating carbs, you won’t have...