Our LossWe Still Don’t Know How to Mourn Jewish Celebrities 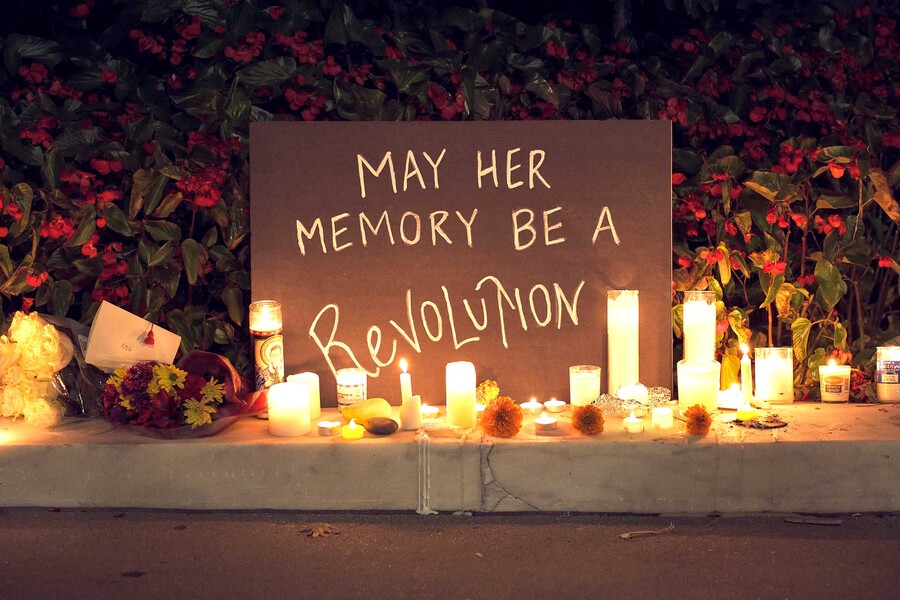 On September 18, as Jewish families around the world rang in the Jewish New Year with a dinner of apples, pomegranates, honey, and fish heads (if sticking to tradition), news broke that Supreme Court Justice Ruth Bader Ginsburg had died. My family was gathered together in Canada, but the news still felt profoundly important; not solely because we were paying attention to the politics south of us, but because Ginsburg stood as a shining beacon of strength, will, and perseverance for Jewish people everywhere—an embodiment of Jewish values. After all, Ginsburg was the second woman and first Jewish woman to be sworn into the United States Supreme Court in 1993, when she was nominated by then-president Bill Clinton. In 2018, she became the longest-serving Jewish justice in U.S. history.

And it is Ginsburg who said in a 2004 speech at the United States Holocaust Memorial Museum, “My heritage as a Jew and my occupation as a judge fit together symmetrically. The demand for justice runs through the entirety of Jewish history and Jewish tradition.” It’s evident that Judaism followed Ginsburg in all that she did, both at the Supreme Court and outside of it, and yet, I dreaded logging on to Twitter the morning after her death because I knew I’d be as frustrated as I always am after a Jewish celebrity dies. I expected to see tweet after tweet anointing Ruth’s ascent to heaven, posts fantasizing about her meeting other recently deceased celebrities, and Photoshopped images of angel wings sprouting from her back and a golden halo hovering above her head. I was correct.

I came across many tweets, some of which went viral, asserting confidently that “heaven gained another angel.” Others wished her a peaceful ascent to heaven, a select few even claiming that she initiated the earthquake that shook Los Angeles the day after her death. There are even votive candles for sale on Etsy and Amazon that refer to her as “Saint Ruth.” I expected this, of course, because it’s become routine following a Jewish celebrity’s death. Similar reactions have sprung up in response to Mac Miller’s and Amy Winehouse’s deaths, both of whom have since been memorialized in paintings as angels. Though some might question why this matters, the acceptable method with which to commemorate a Jewish individual has long been a topic of discussion in Jewish communities: Do we accept any type of commemoration because the intentions are decent, or do we go out of our way to correct and inform?

As I scrolled Twitter, I began questioning the root and validity of my frustration. After all, Ginsburg, a Jewish woman, left such an impact on the world that she evoked vehement sympathy and condolences. Does it matter how people express their sympathy? Yes, it does. Commemorating Ginsburg’s legacy in a way that wholly erases her Jewishness doesn’t respect or acknowledge her identity, which heavily informed her actions. In the same speech from 2004, she said: “I take pride in and draw strength from my heritage, as signs in my chambers attest: a large silver mezuzah on my door post […]; on three walls, in artists’ renditions of Hebrew letters, the command from Deuteronomy: ‘Zedek, zedek, tirdof’—‘Justice, justice, shall you pursue.’” This is the same woman who pushed for the long-standing practice of oral arguments being heard on the first Monday of each term to be moved to a Tuesday because Yom Kippur, the holiest day in the Jewish calendar, happened to land on a Monday in 1995. And yet, despite her openness about her identity, she has largely been memorialized as someone for whom “Amazing Grace,” a Christian hymn, could be sung.

It’s a disservice to remember her as a feminist icon but erase her Jewishness. In remembering her legacy sterilized of any Judaism, all of the obstacles she had to overcome as a Jewish woman are omitted; making wings sprout from her back or putting her in front of the pearly gates of heaven assimilates her identity to ideals and beliefs she did not hold. Heaven is a Christian concept that doesn’t exist in Judaism. Though we have a concept of “life after death,” Western iconography that depicts harps, clouds, and angels is far removed from it. That’s the reason Jewish people don’t focus on a potential future in the beyond; we focus on the life a person has already lived. “May his/her/their memory be a blessing,” is the most appropriate thing you can say when honoring a Jewish person. In writing (or tweeting), it’s also customary to put a “Z”L” following a deceased person’s name, which is the Hebrew acronym for the aforementioned honorific—think of “Z”L” as a Jewish stand-in for “RIP.”

Ginsburg’s memory shouldn’t have to conform to a Christian understanding of the world to be appropriately honored.

In 2019, another honorific was popularized by feminists in Israel to commemorate victims of domestic violence: “May [their] memory be a revolution.” This honorific has since crossed over to North America and has been attributed to Jewish people who leave a resounding legacy in their wake. It would be more than appropriate to bestow it on a person like Ginsburg. We typically don’t give much thought to the fact that our accepted customs around death—those most commonly portrayed in pop culture and written about in song—stem from Christianity. Even a phrase as seemingly innocuous as “rest in peace” has Christian origins, though Jewish people have begun using it over the past couple of centuries. And though it might feel as if the concept of angelic beings ascending to heaven is universal, it isn’t. This might seem harsh: Why criticize people whose intentions aren’t malicious? Decent intentions don’t always translate to respectful actions and this is ultimately a discussion about respect.

If we truly claim to respect an individual, is it not expected that we go the extra length to honor them in a way that respects their culture? Ginsburg’s memory shouldn’t have to conform to a Christian understanding of the world to be appropriately honored. Ginsburg was a child of Jewish immigrants; her formative years took place as the Holocaust was happening in Europe, something that, in her 2004 speech, she said deeply affected her maturation and understanding of both the world and her identity. She will be remembered as a champion of gender equality and women’s rights, as well as a trailblazer in every sense of the word. Her death, which occurred on both a Friday (Shabbat) and the Jewish New Year cements her, according to Jewish belief, as a “Tzadik”—a righteous person. What better way to acknowledge her life and efforts than to honor her using the language that initially informed her? May her memory be a revolution.