The Weight of the WordRuth Bader Ginsburg’s Complicated Legacy 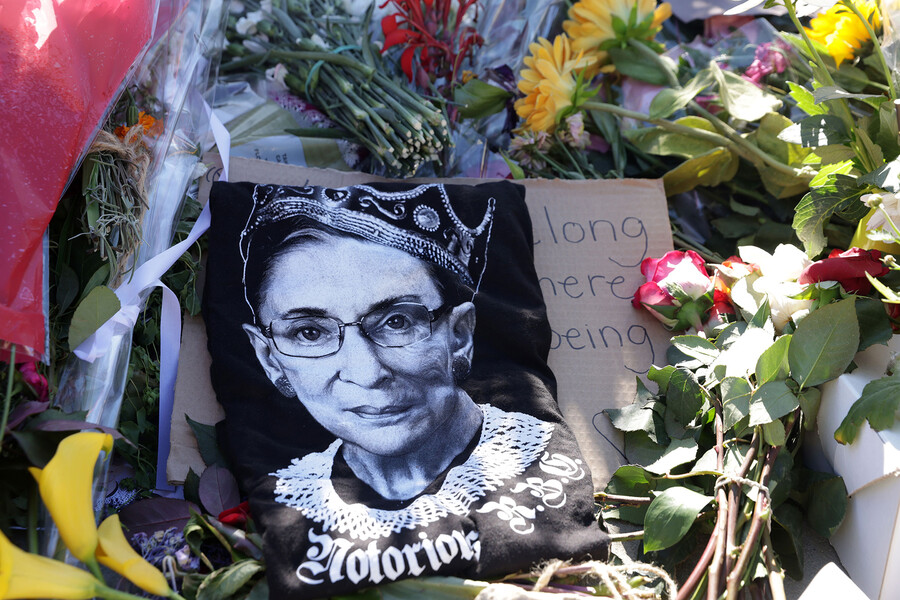 Signs and flowers are left at a makeshift memorial in front of the U.S. Supreme Court for the late Justice Ruth Bader Ginsburg September 21, 2020 in Washington, DC. (Photo credit: Alex Wong/Getty Images)

Even during a year thick with unsubtle metaphors, Ruth Bader Ginsburg’s death last Friday, on the eve of Rosh Hashanah, felt a little on the nose. There’s no definitive agreement on exactly what the timing of her death reveals or portends (as the saying goes, “two Jews, three opinions”), but the urge to find symbolism in it is a fitting close to Ginsburg’s unique presence in the public imagination. As the 87-year-old Supreme Court justice’s health visibly declined in the last several years, preparing to lose her became a kind of collective rite on Twitter, inevitable and dreaded in equal measure. Calls to cocoon Ginsburg in bubble wrap, offers to donate any organs she might need, spells to shroud her in protection—these performative gestures were a layer of playful mock-desperation laid over a bedrock of actual desperation. Ginsburg, even if she’d lived to age 105, would have had little chance of stemming the tide of conservative court-packing central to the Republican Party’s long game.

But in the last four years, when every day has confirmed that there are no adults in the room willing to acknowledge that the Trump administration is a crime syndicate in the guise of a Veep episode, Ginsburg represented a sliver of hope that, like her, was small, fragile, and necessary. And the discourse around whether she should or should not have retired under a Democratic president to make way for a younger justice is emblematic of how much we demand of our progressive heroes, particularly when they are women. I didn’t know much about Ginsburg when Bill Clinton nominated her to the Supreme Court in 1993. She was Jewish; she and my mother were once classmates at Brooklyn’s James Madison High School; and—perhaps most important—she seemed to terrify the same people who opposed Ronald Reagan’s 1981 nomination of Sandra Day O’Connor as the Supreme Court’s first female justice.

North Carolina’s all-star racist Jesse Helms, for instance, was one of only three senators who voted against confirming Ginsburg; he complained that, among other things, she was “likely to uphold the homosexual agenda.” That sounded like a win to me. But Ginsburg wasn’t an outsized presence on the court until late in her tenure, and was generally known as a strategic moderate. Her transformation into The Notorious RBG came in 2014, by way of a Tumblr created by law student Shana Knizhnik in the wake of Ginsburg’s withering dissent on the court’s gutting of the Voting Rights Act. There were two other women on the Supreme Court by then—Elena Kagan and Sonia Sotomayor were both appointed by Barack Obama in his first term as president—and Ginsburg no longer stood out as the lone woman on the bench, nor was she the only justice on the court’s so-called liberal wing.

The somewhat retroactive elevation that cast Ginsburg as America’s most formidable judicial opponent can certainly be chalked up to the pointed dissents she directed at her fellow justices in cases like Ledbetter v. Goodyear Tire & Rubber Co. and Conestoga Wood Specialties Corp. v. Burwell (better known as the Hobby Lobby case). It can also be explained by the fact that those dissents landed in a social-media ecosystem that prizes both virality and controversy (and, to a lesser extent, the hilarity of plainspoken old ladies who are sick of everyone’s shit.) And, finally, it gave shape to what many women saw in Ginsburg as a Supreme Court justice: Someone whose education and subsequent career was dogged at every step by institutional sexism, who was well aware that it was something that can’t be legislated away, but who nevertheless sought to widen the scope of a Constitution that—as she pointed out during her own confirmation hearing—was written with only one kind of citizen in mind.

It was frustrating to go online in the hours after Ginsburg’s death last Friday evening and see that Twitter had swiftly become a referendum on both Ginsburg herself and the people she inspired, with accusations of “ego” and selfishness alternating with sneering mockery for anyone earnest enough to be sad in public. The belief that Ginsburg made a mistake by not retiring in 2009 or in 2014, and the assumption that the court would be in a better place if she had, are both obvious and logical. But it’s also not that simple. Though Ginsburg saw the alarming big-picture endgame of the GOP’s court-packing efforts, she had no way of knowing that, say, foreign interference would allow a terrifyingly cruel and unqualified grifter to assume the presidency in 2016, or that her friend Antonin Scalia would die suddenly at the age of 79 as Barack Obama’s second term drew to a close. Linda Hirshman, author of the 2015 dual biography Sisters In Law: How Sandra Day O’Connor and Ruth Bader Ginsburg Went to the Supreme Court and Changed the World, points out that Ginsburg did know that it would likely be impossible for Obama to confirm another liberal justice. (Or, as Ginsburg herself put it in a 2014 Elle interview, “Anybody who thinks that if I step down, Obama could appoint someone like me, they’re misguided.”) So to say, as more than one progressive tweeter confidently did, that Ginsburg “should” have retired is assuming a scenario in which everything else would also have gone exactly according to plan. Anyone to whom the name Merrick Garland means anything can confirm that it didn’t.

There’s no question that the past decade’s memeification of RBG has, at times, felt like a hollow example of marketplace feminism, especially given the decidedly unadmirable features of her career—including decisions that seemed to run counter to her civil-rights background, a record of hiring Black law clerks that was suspiciously skimpy, and an opinion on Colin Kaepernick’s protest that was both badly stated and ethically indefensible. Ginsburg’s pop culture omnipresence has effectively drowned out crucial critiques of her record; that doesn’t mean that every woman who admired and believed in Ginsburg doesn’t care about it. Likewise, pointing out the obvious and reflexive sexism and ageism in discourse around what prominent women should or shouldn’t do is not the same thing as a mindless, unquestioning frenzy of fangirling.

We’ve always been inclined to turn groundbreaking women into feminist icons—not because they’re perfect feminists, but because we know how easily such women can be erased.

That this still needs to be said speaks to the fact that, as Rebecca Traister wrote, “[I]n the absence of structural security it is far easier to home in on individuals—as both our heroes and our villains—than it is to reckon with the enormity of what’s wrong and what needs to be righted.” Had Ginsburg retired in 2014, the same people who are furious with her now would find a way to scapegoat her for a different systemic problem or dysfunction. When the political landscape only makes room for one woman at a time, she will inevitably fall short. At the same time, we’ve always been inclined to turn groundbreaking women into feminist icons—not because they’re perfect feminists, but because we know how easily such women can and will be erased. Ginsburg’s own legal heroine, the pioneering Black civil-rights lawyer Pauli Murray, is just one example.

An activist, cofounder of the National Organization for Women, and member of the board of directors of the ACLU, Murray’s impact on the Civil Rights Movement can’t be overstated. (When future Supreme Court justice Thurgood Marshall headed the NAACP, he used arguments from one of Murray’s law-school papers in the organization’s strategy in Brown vs. Board of Education.) Murray’s holistic approach to law predated Kimberlé Crenshaw’s framework of intersectionality but was unmistakably an example of it, and her legal influence on Ginsburg was so profound that Ginsburg named her a coauthor of her brief in 1971’s Supreme Court sex-discrimination case Reed v. Reed, which ultimately applied the Equal Protection Clause of the 14th Amendment to women. Yet Murray is rarely acknowledged as the towering civil-rights figure she was, perhaps because of who she was—Black, lesbian, and an unapologetic activist. Her ACLU predecessors Jeannette Rankin and Dorothy Kenyon, meanwhile, are equally undersung.

As much as her star status amused Ginsburg, there’s no question that what she wanted to be remembered by is not dogs dressed in lacy collars or Kate McKinnon’s celebration of the “Ginsburn,” but by the things she made possible for others. And because Ginsburg’s dream of nine Supreme Court seats occupied by women seems less and less likely, she and her colleagues will always have to balance the weight of being first with the reality that the designation confers expectations they can’t or won’t meet. Sandra Day O’Connor was the first woman on the Supreme Court. Sonia Sotomayor was the first Latina to be seated on it. Trump’s likely nominee to take Ginsburg’s seat, Amy Coney Barrett, will, if confirmed, be the first justice whose faith community served as the model for the chilling world of The Handmaid’s Tale. Ruth Bader Ginsburg will always be the court’s first pop culture icon, for better and for worse. As dubious as that distinction is, it helps ensure that those inspired by her won’t always have to shoulder a burden that should never have been theirs alone.

Read this Next: What Just Happened 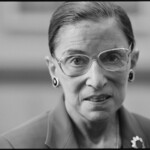 by Bitch HQ
We can channel RBG’s determination to fight back against unjust systems.