Sages, Villains, and SeersMapping Disability in Science Fiction and Fantasy 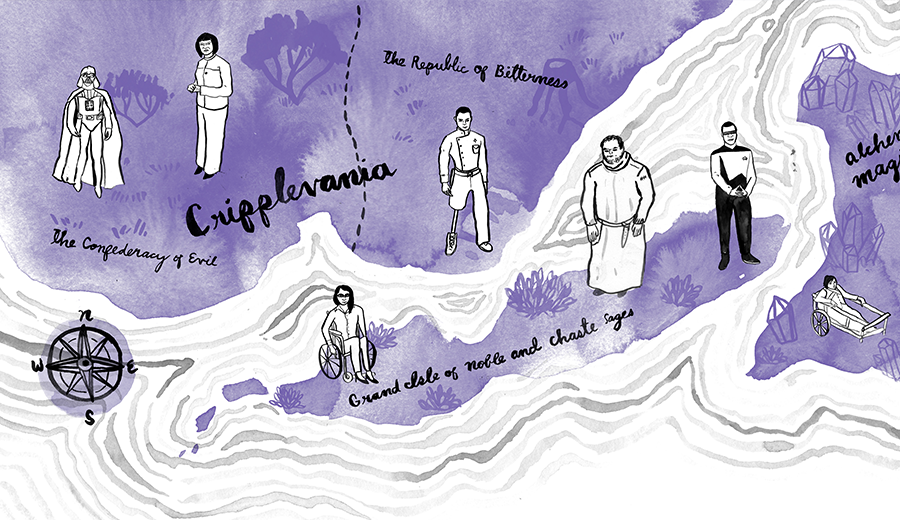 This article appears in our 2016 Winter issue, Nerds. Subscribe today!

When disability is used in literature, pop culture, and media, it’s often implemented as a characterization device rather than as a reflection of society—a metaphor for deficiency or vulnerability.

In sci-fi and fantasy, where you have to consider whether a mutant or a witch who has lost her powers is disabled, the social body against which ability is measured becomes radically erratic. Even so, recognizably disabled characters can be broadly identified by the same tropes used in the rest of pop culture: the bitter or evil cripple (a word I use to reappropriate a term widely considered negative), the magically cured, the noble sage, or the good disabled person who overcomes obstacles. Many characters traverse the map from bitter cripple to world-destroying evil, or pass through a magical cure on the way to being a noble sage, but only rarely do they step off the map entirely.

In disability theory and activism, we talk about the “medical model”—which views disability as an exclusively individual problem in need of a solution—and the “social model”—which locates disability within society, a result of political and cultural conditions experienced by people with disabilities as a social group. Hobbits in Lord of the Rings aren’t disabled within the Shire, where everything is built in a way that fits their size, but could be disabled by their surroundings when traveling through the rest of their world. The social model would posit that it isn’t their size that’s the problem; it’s whether their size is accommodated by society. Separately, the two models can be an awkward fit with the lived realities of people with disabilities, who are by no means a monolithic group. Bodies and minds will always be rooted in a sociopolitical context, and it is that context that privileges one type of body and one type of mind over all others.

But what do these ideas mean in imagined worlds and foreign universes? Sci-fi/fantasy fans and creators look to the genre for visions of better worlds, but too often those worlds include only bodies that are valued in our current one: The one ring to rule them all had better be held by a white, heteronormative, abled male. Instead of a progress narrative that effectively eliminates difference, sci-fi should be asking for whom this future was created, and at what cost? Instead of restoring order by curing or overcoming disability, sci-fi and fantasy could acknowledge that disruptive and disabled bodies and minds create unique perspectives and possibilities for a horizon that includes accessible futures. To paraphrase José Esteban Muñoz in Cruising Utopia, we can resist accepting that which is not enough.

In looking at the map of characters with disabilities on the next pages, consider whether these characterizations and tropes are enough, or if, to borrow from Alison Kafer in Feminist, Queer, Crip, we can imagine a “crip futurity” that includes all of us.

Disabilities, in particular missing limbs or a noticeable limp, have long been used as shorthand for evil. Within minutes of meeting Fringe’s potential baddie Nina Sharp, she recounts losing her right arm to cancer and pulls the skin-like covering off of what can only be described as a shiny android arm clearly unlike any known prosthetic device—we know better than to trust somebody with an arm like that! It eventually becomes clear that she’s one of the good guys, but we are kept in the dark about her intentions for the first few seasons. Anakin Skywalker is well on his way to the Dark Side when he suffers severe burns and loss of limbs in a duel with his mentor, Obi-Wan. His disabilities are both the culmination and the cause of evil; he wouldn’t have been Darth Vader without the suit, bionic limbs, and respirator, and he wouldn’t have been burned and disabled unless he was already evil.

On the other side of Cripplevania is where the Bitter Cripples live—people like Lieutenant Felix Gaeta from Battlestar Galactica. While BSG does pretty well when it comes to problems amputees like Gaeta face, from phantom-limb pain to difficulty fitting a prosthetic, the show fails when it comes to Gaeta’s mental state. Gaeta’s gradually rising resentment is directly related to his acquired disability. On a show where people have lost nearly everything—home, family, love, and galaxies—it’s his missing leg that catalyzes his mutinous betrayal of his friends and beliefs. In a series of online webisodes, we learn Gaeta is bisexual. Despite producer Jane Espenson’s protest that homophobia doesn’t exist in the BSG universe, they did put only one of two queer relationships in the webisodes, and there are no happy endings for queers or people with disabilities on the show. Gaeta’s final words in front of a firing squad are “It stopped”—“it” being his phantom-limb and stump pain, a conclusion that not only links disability and pain with treachery and anger but implies that death is the only way to be free if you are disabled.

Since it’s often assumed that people with disabilities either don’t or can’t have sex, most characters with disabilities are distinctly desexualized. Noble sages are particularly monkish in their sexuality. Geordi La Forge of Star Trek: The Next Generation was, in many ways, an advocate for disability rights, but writers weren’t able to come up with much in the way of romance for a Black man with a disability (Data, the android, had more romantic relationships). Batgirl-turned-Oracle Barbara Gordon from the DC Comics universe becomes an all-purpose hacker/encyclopedic knowledge bank after becoming a paraplegic and hanging up her mask. Although a fan favorite, she’s as hapless as La Forge when it comes to relationships. Noble sages with disabilities bear their burdens bravely or at least stoically, as Hodor from Game of Thrones does, proving that you don’t have to have a genius-level intellect to live on this Isle. All that’s really required is a willingness to help in the ways able-bodied people want you to, and an implied chastity belt.

In the bestselling young adult novel Graceling, Kristin Cashore creates a world where certain people are born with “graces”—abilities or senses that are uncommon or unique. Prince Po is blind, but his grace is perfect perception of the world around him and the thoughts of others. Even though he is physically blinded, his grace grows stronger and becomes more specific, to the point that he is able to hide his disability from others. The cure is a deus ex machina that provides character-building without the social, political, and interpersonal changes that long-term disability might require. This particular clairvoyant cure is especially common with loss of sight: An attempted murder on Game of Thrones renders Bran Stark paraplegic, but in the absence of full physical freedom he discovers his ability to enter the minds of animals and some humans, seeing through their eyes in prophetic form. Avatar’s Jake Sully receives a magical cure for his paraplegia in the form of an entirely new (superior, stronger, bluer) body.

In sci-fi and fantasy, embodied difference is frequently seen as the enemy, as though human existence should be flattened rather than engaged with. If people with disabilities could just adapt themselves, society and its environments wouldn’t have to change. Melora Pazlar, of Star Trek: Deep Space Nine, comes from a planet with low surface gravity, and in order to work on DS9, she requires a (futuristic! silver!) wheelchair and exoskeleton to remain mobile in “normal” gravity environments. Striving to be a stellar cartographer, she “wasn’t going to let a…handicap…prevent me from pursuing that dream.” When offered an (unsolicited) treatment that would allow her to live in heavier gravity without aid, she decides to stay “under the sea” instead of Little Mermaid-ing herself onto land. She chooses her home and her identity over “normality.” This is a gratifying twist and explains why Pazlar remains in this sovereignty instead of the Land of Magical Cures.

Sci-fi and fantasy can also be sites for entirely new ways of envisioning dis/ability. There are glimpses of it in characters like Geordi La Forge, who early in the TNG series decides to stick with his VISOR instead of getting ocular implants because he likes how he sees the world with it. This, too, is a magical cure, but the idea that looking “normal” isn’t the ultimate goal of people with disabilities is encouraging. More recently, Firefly spent an entire season looking for a cure for River Tam’s neurological disabilities only to conclude that she’s actually pretty kick-ass as is. N.K. Jemisin’s 2011 book The Broken Kingdoms follows Oree Shoth, a blind artist and craftsperson. Jemisin could have gone headlong toward a magical cure; instead, Shoth remains blind except for an ability to see magic. In response to fan questions about why Shoth was written as a Black blind woman; Jemisin notes the subtext: “Ultimately the real problem with all these questions is not the writer’s choice, but the reader’s assumptions about who ‘belongs’ in epic fantasy.” It’s perspectives like these that remind us how disruptive sci-fi and fantasy can be, and that the future horizon doesn’t have to be a straight line.