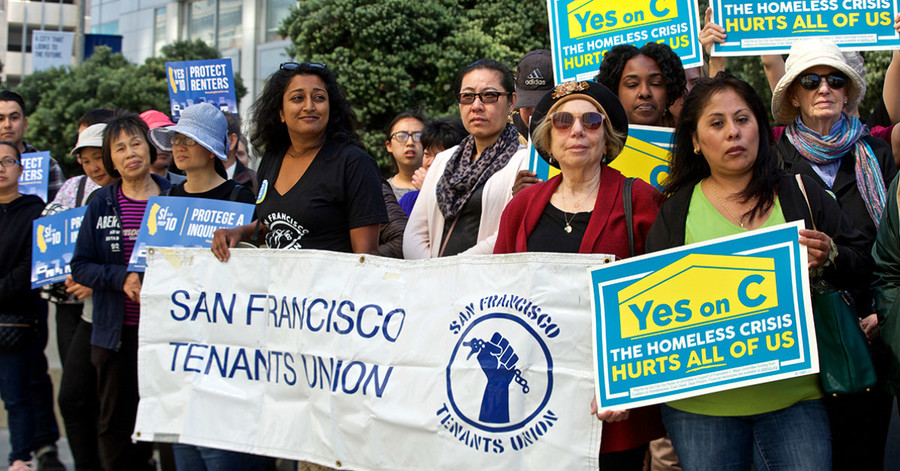 Tenant advocates rally in support of both Proposition 10 and Proposition C across from the California State Building on Golden Gate Avenue on Monday, Sept. 24, 2018. (Kevin N. Hume/S.F. Examiner)

On Election Day, San Francisco passed a proposition that aims to fight houselessness by taxing million-dollar corporations between 0.175 and 0.69 percent. Mountain View (where Google is based) and East Palo Alto passed similar measures that will tax the Bay Area’s ballooning tech industry. San Francisco is considered ground zero for America’s houseless crisis, and the outcome of Proposition C could dictate how other cities, from Los Angeles to New York City, handle houselessness. It’s also an important opportunity to reframe the ways in which we culturally understand the issue.

Unhoused people are misrepresented and underrepresented in pop culture as either villains on procedurals such as Law & Order: Special Victims Unit or as inspirational figures in movies such as The Pursuit of Happyness (2006) and The Soloist (2009). These characters inhabit one-dimensional stereotypes: Bums on street corners who buy booze for underage kids, down-on-their-luck men who teach journalists valuable lessons, or mentally-ill bag ladies who help detectives crack cases. The reality of houselessness, however, is much more complex.

While Secretary of Housing and Urban Development Ben Carson believes that poverty is a “state of mind,” houselessness is not a personal failing. In larger cities like New York, many houseless people have jobs, but don’t earn enough to afford housing. Statistics from 2017’s point-in-time count shows that families account for around a third of unhoused people, veterans make up about 7 percent of the houseless population, and unaccompanied children—like queer youth kicked out of their homes—account for another 7 percent. Mental illness is also common in houseless communities. Yet people experiencing houselessness are often treated as if they’re the problem, while the circumstances that create houselessness—such as housing scarcity, high costs of living, untreated mental-health conditions, and abuse—are glossed over.

Skyrocketing housing costs in California and other states contribute to houselessness, but voters routinely resist measures that would result in more housing because they think it will reduce home values, block views, destroy “historic” structures, or invite unwanted elements (poor people) into the community. Even as San Francisco voters decided to tax the city’s wealthiest corporations, California voters rejected Proposition 10, a.k.a. the rent-is-too-damn-high initiative, that would’ve lifted a 1995 law that severely limits how cities implement rent control. (Opponents of the proposition spent $74 million to defeat it.) Newer developments usually aren’t reasonably priced: Developers would rather pay fines than build affordable units) and qualifying for public housing can be a nightmarish process.

Hostile social attitudes about unhoused people is best exemplified by the Snapcrap-app debacle. When San Francisco–transplant Sean Miller found human feces on his neighborhood sidewalk, he decided to build an app that allows people to send photos of human waste to the city’s Public Works Department. San Francisco already has a 311 app that serves the same purpose, but that didn’t deter Miller. “After working at a startup in San Francisco for a year and a half, I’ve gotten pretty good at recognizing the ‘drop everything you are doing and fix this now’ problems,” he recently told the Los Angeles Times. “The fact that San Francisco is one [of] the most popular cities in the world and we have people living in fear who are scared to walk to work or take a bus is simultaneously heartbreaking and infuriating.”

Miller thinks that people who can afford housing in San Francisco deserve to be pitied, but he denies the basic humanity of unhoused people by not acknowledging that people who defecate on sidewalks may not have access to bathrooms. His proposed solution for this growing problem further stigmatizes unhoused people, which can have fatal consequences; for example, in 2014, Lam Tai was beaten to death in the Financial District while sleeping on the sidewalk. Harassment and assault are common for people experiencing homelessness, and a University of California, San Francisco, study found that unhoused people in San Francisco experience sexual and physical assault at a rate 40 times higher than the general population.

People experiencing houselessness are often treated as if they’re the problem, while the circumstances that create houselessness—such as housing scarcity, high costs of living, untreated mental-health conditions, and abuse—are glossed over.

But this isn’t the first time that an initiative has targeted and shamed houseless people. In 2002, California Governor-elect Gavin Newsom’s “Care Not Cash” ballot measure asked voters to give cash to government-approved organizations instead of directly to unhoused people in order to lower the amount of homeless people on welfare in the city. According to a 2015 SFGate article, Newsom said that “soon [there would be] no more homeless people on welfare” and that “we can solve homelessness,” but 13 years later, there’s still approximately 7,500 houseless residents in San Francisco. As the Guardian documented in its 2017 award-winning “Bussed Out” series, some California cities have even started giving unhoused people a one-way bus ticket to other cities.

Meanwhile, cities such as Oakland, San Francisco, and San Jose are bulldozing houseless camps, and in Modesto, California, these efforts proved fatal, leading to the death of Shannon Marie Bigley in August. Leilani Farha, a United Nations special rapporteur on adequate housing, recently called California’s treatment of houseless people “cruel and inhuman” and said that pushing people out of “informal settlements” violates their human rights. Instead of shaming people without homes, states should create programs that focus on securing housing for people and providing additional resources. (Proposition C will dedicate roughly $150 million to housing.)

Given the prevalence of mental illness in the community, mental-health services are often pushed as an important part of the solution, but the way in which they’re proposed is extremely alienating. California’s legislature recently moved to make it easier to force mentally-ill people without housing into treatment, despite opposition from civil-rights advocates. Coerced treatment is both dehumanizing and ineffective, especially when California lacks sufficient mental-health services, and there aren’t measures that will make mental healthcare more accessible. Food banks, clothing distribution, and other direct assistance measures play a vital role in helping people with immediate and sometimes life-threatening needs, and direct-cash transfers are also effective and empowering because people can then decide how they spend the money.

It’s indisputable that large numbers of people are living unhoused in the United States and that current policy initiatives are falling short on meeting their needs and determining how to get them into housing and connected with resources. But throwing money at the problem, as San Francisco proposes to do, isn’t sufficient when “the problem” is viewed as the people instead of the institutional structures that cultivate and perpetuate houselessness.