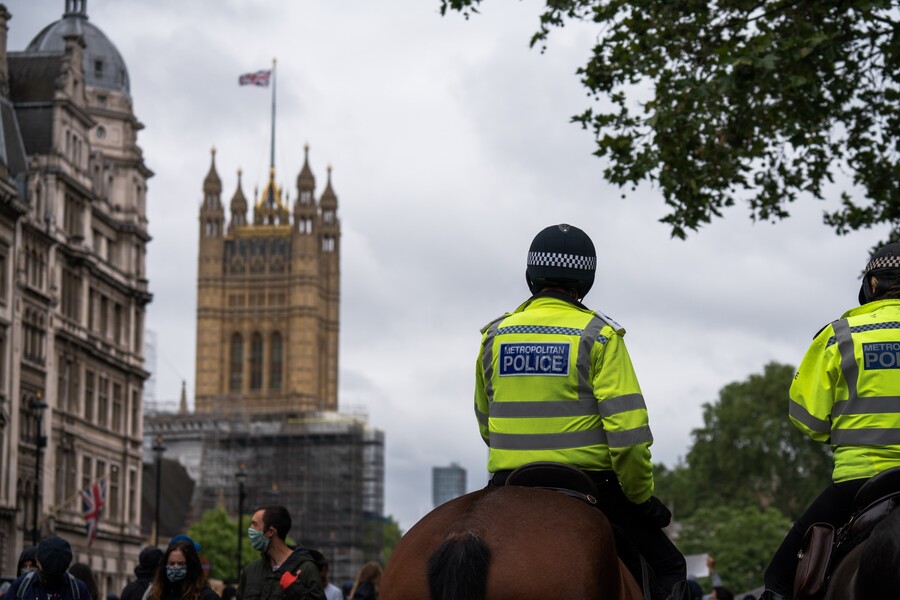 On March 3, Sarah Everard, a 33-year-old London-based marketing executive disappeared on her way home. Somewhere along her 50-minute walk from Clapham to Brixton, she was kidnapped and brutally murdered by 48-year-old police constable Wayne Couzens. Everard’s body was found stashed in a trash bag in Ashford, Kent, and the shocking brutality of the femicide spurred women in the United Kingdom to take to social media to share their experiences of feeling unsafe walking home, the futile security measures they take, and the grief of losing yet another woman to male violence.

The fact that Everard’s killer is a police officer has a significance that’s hard to deny; but, in the wake of the murder, there have been efforts to do just that. When the advocacy groups Sisters Uncut and Reclaim These Streets announced socially distanced vigil scheduled for Saturday, March 13 at the bandstand of Clapham Common the Metropolitan police—Couzens’s employer—declared it unlawful because of coronavirus restrictions. Sisters Uncut—a group that has organized against both police violence and violence against women for seven years—showed up regardless, and were joined by hundreds of others in collectively mourning Everard’s death. Less than two hours after the event began, police officers informed the grieving women that they had to leave due to COVID-19 constraints, and a cluster of officers moved in on the group. These containment and corralling policing techniques involve surrounding protesters to keep them in a particular space, which makes social distancing—or leaving, as the police kept telling the group to do—impossible.

Quickly, the police became violent, manhandling the vigil attendees off the bandstand and in some cases wrestling them to the ground. Four protestors were arrested. Outrage followed. Since the police were violent to the vigil attendees on Saturday, Metropolitan Police Commissioner Cressida Dick—who was also in charge of a 2005 operation where an innocent Brazilian immigrant was fatally shot by police in London—defended the force’s handling of the vigil, noting that the gathering posed “a considerable risk to people’s health.” Despite public demands for her to step down in the wake of the incident, Dick has refused to quit. On the ground, the Sisters Uncut collective has stood firm in its resolve to oppose police forces, using the momentum of the violently repressed vigil to campaign against a bill of law that will further curtail the right to protest in the United Kingdom. “It is in the interest of every person, but especially every woman, that Parliament kills the Police, Crime, Sentencing and Courts Bill. If we do not, we have everything to lose,” they wrote in an opinion piece for iNews.

Organizers from the Reclaim These Streets group, on the other hand, have taken a conciliatory tone toward the police, even stating that they do not want Commissioner Dick and that they are open to speaking to the police in order to “rebuild relations with women who have lost trust and are hurting.” In an interview on Monday, March 15, Reclaim These Streets member and Labour Party councillor Anna Birley said, “We are a movement of women seeking to support and empower other women. And as [Commissioner Dick is] one of the most senior women in British policing history, we don’t want to sort of add to the pile-on.” A report in gal-dem, a media publication committed to telling the stories of marginalized people in the United Kingdom, has also asked important questions of the Reclaim These Streets group, who raised half a million pounds to cover legal costs but has been ignoring the Sisters Uncut group.

It is clear that the feminist organizers running the Reclaim These Streets group still believe that violence against women can be addressed through policing, criminalization, and the imprisonment of individual abusers. Lost in the post-vigil conversation, however, is thatEverard’s murdered was not only a policeman himself, but one who was already being investigated for indecent exposure. Social-media commentary has fallen broadly into two camps: One insists that “women should fear cops, not men;” the other, that “cops must ensure women’s safety.” What this division ignores is how police violence and violence against women are intimately connected. At best, the police do not actively protect women and at worst, they are the perpetrators of violence against women and/or incarcerate survivors of violence. When a woman leaving the Everard vigil was flashed on her way home, she was told by a male police officer that the incident wouldn’t be investigated because “[W]e’ve had enough tonight with the rioters.”

The history between women and police is one filled with tension. The United Kingdom specifically has a long history of undercover cops faking relationships with female political activists in what victims of these tactics have called “coordinated rape,” and—much like police all over the world—the U.K. police perpetrates fatal violence against people of color and detains and deports migrants seeking asylum. A 2014 report from Her Majesty’s Inspectorate of Constabulatory on policing and domestic violence revealed that only eight out of 43 police forces in the United Kingdom responded well to domestic violence. Following last Saturday’s vigil, Sisters Uncut posted a list of 194 women who were murdered in prison or under police custody since the 1970s.

In the United States, meanwhile, studies have revealed that cops abuse their partners and families at staggering rates. According to the ACLU, nearly 60 percent of people in women’s prison in the USA, and as many as 94 percent of some women’s prison populations have a pre-incarceration history of physical or sexual abuse. The criminalization of survivors is a facet of the police and prison state, as the system ignores, and even tacitly sanctions, violence by some actors—often rich white men and policemen who brutalize Black and brown people—while incarcerating sex workers, homeless citizens, mentally ill people, and others simply trying to survive an increasingly precarious landscape of disaster capitalism.

Such statistics are presented as failures of the police to keep women safe; in fact, prison abolitionists argue that the system is working exactly as designed. Women’s legitimate fear of assault, rape, and harassment in a deeply misogynistic society has long been used to justify increased policing and criminalization of people of color. Racialized survivors of interpersonal violence are incarcerated, deported, or simply left to die without material or psychological support. Even when survivors of gendered violence are believed by police and enter the adversarial justice system, the system tends to re-traumatize them rather than providing any sort of care. With the pretext of protecting women, the criminal-justice system instead validates masculine violence through institutionalization, while doing nothing to eradicate it or support its survivors.

Instead of being a vehicle for real change that transforms the problem of violence against women at the root, the police force is an institutionalization of masculine violence.

Instead of being a vehicle for real change that transforms the problem of violence against women at the root, the police force is an institutionalization of masculine violence used by nation states to repress the masses—especially masses who are usually racialized or otherwise seen as deviant. By using excessive force, surveillance and criminalization, the police masquerade as a solution for the societal problem of misogyny and sexism while doing nothing to eradicate it or support its survivors or the people trying to grieve the bereaved. As if to prove this point, on March 16, the Conservative government announced that police could patrol bars and clubs to “protect” women in the wake of Everard’s murder. Meanwhile, 12 years of government cuts to funds for domestic-violence shelters, mental-health services, and the larger welfare state have ensured that women stay poor, vulnerable, and without any relief. In the seven years since its founding, Sisters Uncut has argued that state violence should be acknowledged as a facet of violence against women.

Sarah Everard’s murder and the response to it underscores that women’s safety requires more than “protection” by disciplinary actors of the state that—even when they aren’t, like Wayne Couzens, the exact same men who perpetrate violence against women—still work in service of the status quo of heteropatriarchy and white supremacy. Conciliatory negotiations with police should not even be on the table when it is demonstrable that more policing does not equal more safety. With creativity and solidarity, women’s safety can only be achieved through pushing to defund the police and funneling that money into preventative and reactive programs against violence that truly target what women need to be safe and protected. That’s what Sarah Everard, and all women, deserve.