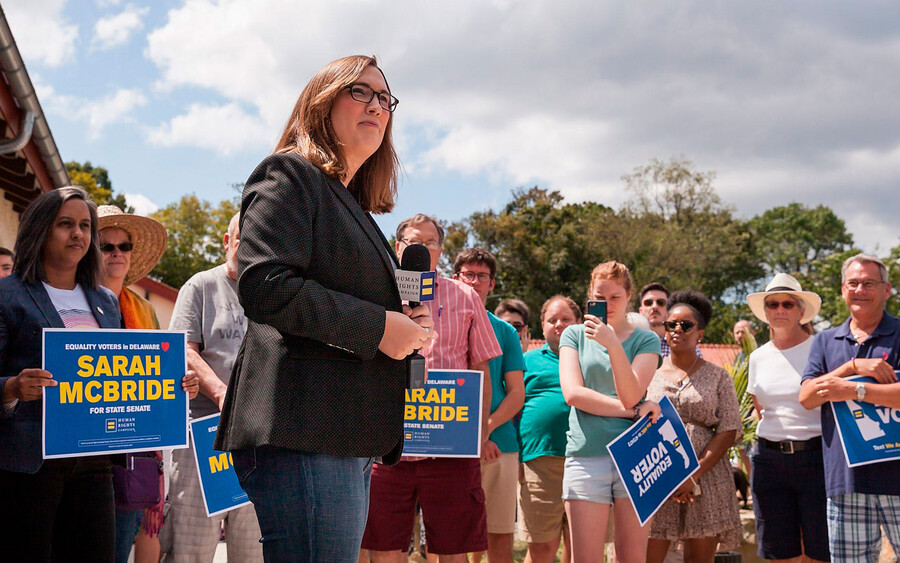 When I interviewed Sarah McBride in 2018 about her memoir, Tomorrow Will Be Different, I asked her how she maintained her dogged faith in electoral politics’ capacity for change. We were both white trans women, both (then) twenty-eight-years-old, but like many millennial trans people, I couldn’t understand why she wasn’t angrier and more impatient. “We need every single pressure point to achieve the kind of change that we truly need,” McBride told me. “The skills I have and the contributions I can make are oftentimes in the sphere of politics and mainstream organizations…what provides me hope is that I have seen organizations change.” I conceded that a diversity of tactics was probably a good thing but found myself still mulling over the statement days later. Could procedural reforms really fix the issues facing our community?

Two years later, those skills and contributions have taken McBride beyond her role as the national press secretary for the Human Rights Campaign (HRC) and directly into the halls of power. She clinched her Delaware State Senate race by a wide margin on Tuesday night, and when she’s officially sworn in, McBride—who’s already known for a plethora of “firsts,” including being the first trans woman to address a major party convention and the first trans White House intern under Barack Obama—will again make history as the first transgender senator in America and the nation’s highest-ranking trans elected official. Jubilation erupted from her former employers at HRC, Chelsea Clinton tweeted a hearty “Congratulations Sarah McBride!!!!”, and national newspapers immediately touted the iconic nature of her win.

But figuring out the actual significance of this particular milestone is much more complicated than it may seem at first blush. Though it’s tempting to characterize McBride’s win as evidence that trans Americans are achieving greater power through representation and visibility, that doesn’t tell the full story of her candidacy and political influence in Delaware. Already the literal face of trans politics in Delaware thanks to her family’s appearance in Equality Delaware’s 2013 TV ads, McBride’s close personal ties with the Bidens and work on behalf of Hillary Clinton is no secret; inasmuch as her victory comments on the political progress trans people in general have made, McBride primarily proves that white trans people have become safe enough to be establishment Democrats. For her part, McBride has certainly been making game efforts for years.

Her platform’s primary plank has always been healthcare, thanks both to her own experiences as a trans woman in America and her husband Andy’s untimely death from cancer, making it distinctly possible that trans Delawareans will enjoy stronger medical protections and more informed care in the future. The elections of Stephanie Byers in Kansas and Mauree Turner in Oklahoma both hold incredible significance for trans people of color and nonbinary people in areas where trans rights are particularly embattled, and both candidates deserve significant attention for their prior work and what’s to come after joining their respective statehouses. But it’s often taken for granted that gathering more and more institutional power is beneficial for individual members of a marginalized group, that the success and visibility of a few will naturally lead to broader acceptance and integration of the many and even inspire others to take up the reins of power as well.

It’s crucial to understand who benefits the most from the visibility of white trans people like McBride.

“It is my fervent hope that tonight a young [trans] person…anywhere in this country can go to sleep tonight…with a powerful but simple message: that our democracy is big enough for them too,” McBride said during her acceptance speech on Tuesday night. But even as trans politicians make gains, the reality of political visibility isn’t that easy. This isn’t to say that McBride will be a poor representative for her district or that her win is devoid of real meaning; seeing trans elected officials would have changed, well, everything for me as a child. However, white trans women—including McBride, Taylor Small, Brianna Titone, and Lisa Bunker—scored many of the victories for trans people this election, and Byers and Turner’s wins received far less acclaim despite stunning symbolic significance: Byers is one of a record-breaking six Native representatives elected this year, and Turner is now both Oklahoma’s first Muslim legislator and the nation’s first nonbinary elected official in history. With these facts comes the responsibility to acknowledge the role racism still plays in trans politics.

White trans women may work hard to win campaigns, but those wins are universally more achievable by dint of being white in a racist political system. Being trans in a transphobic society may be a radical act, but being white in a white supremacist one is to simply be a participant. So, as we accumulate institutional power, the question for white trans women is steadily becoming whether or not we will successfully redistribute that power to the rest of our community. Visibility as a pathway to collective liberation has always relied on a sort of trickle-down theory to work, and in a certain sense, it has: It’s true that most people can’t accept what they don’t understand, and the radical vulnerability of so many trans people over the past few decades has led to a very different political reality than many of us could have imagined as scared, confused trans children. But it’s crucial to understand who benefits the most from the visibility of white trans people like McBride: Is it the trans community as a whole? Is it white trans women specifically? Or will it simply be contained to the newly-forming trans politico class? My pessimistic tone notwithstanding, it’s really too early to say, but I know I’m not alone in hoping our new representatives don’t find their seats at the table too comfortable.