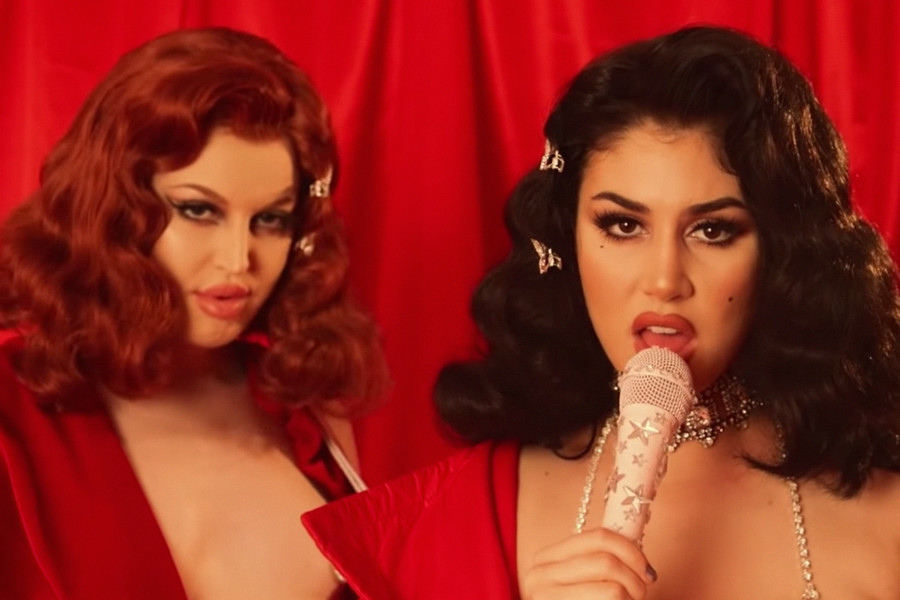 Ruby, left, and Queenie from Sateen in the “Finer Things” music video (Screenshot from YouTube/Sateen Official)

During a March 2019 taping of Piers Morgan’s Life Stories, Mel B—a.k.a. Scary Spice—revealed that she hooked up with bandmate Geri Halliwell during the height of their Spice Girls fame. (Halliwell says she never had a physical relationship with Mel B, and she most likely did not consent to the announcement.) Mel B’s confession stirred up conflicting emotions among Spice Girls fans: Some rightfully noted that outing a queer person is extremely insensitive, while others perceived it as confirmation of a long-held belief in the Spice Girls’ subtextual queerness and woman-loving-women energy. “This is news to approximately no one,” wrote Autostraddle writer Stef Schwartz shortly after the news broke. “The sound you just heard was the sound of roughly one million queer women in their late 20s and early-to-mid 30s doing roughly one million spit takes.”

Mel B’s revelation was arguably misguided, but for the women-loving-women who grew up with life-sized Spice Girls posters in their bedrooms, it felt like a validation of the group’s rightful place in the queer canon. “When Melanie B’s relationships with women first became commonly accepted tabloid fodder, it seemed obvious to anyone who was paying attention in the ’90s that something gay must have been going on in the Spice Girls,” Schwartz tells Bitch. “For kids who were growing up queer or alienated in really any way, the girl-power ethos helped us feel like we were part of an awesome community.”

Some of the most visible girl groups and woman-led bands of the past several decades—including the Indigo Girls, Tegan and Sara, the Veronicas, Sleater-Kinney, and Russian early-aughts duo t.A.T.u.—have openly identified as queer or included queer group members. And though not all girl groups or woman-led rock bands are queer, many of them have long been touchstones for devoted queer fandoms. “I wasn’t necessarily surprised that Mel B and Geri hooked up during their time in the Spice Girls because I think everyone is gay, but I do think it was important for me, a superfan, to hear something like that vocalized,” says culture writer Jill Gutowitz. “I think it’s necessary for queer women to be visible in and to feel represented by girl groups because we’ve been their core fanbase for years.”

This sentiment remains true for a new generation of queer fans. Spice Girls aside, girl groups—including Destiny’s Child, TLC, Salt-N-Pepa, B*Witched, and the Dixie Chicks—dominated the pop-music landscape of the ’90s. Now, a new girl-group renaissance is taking hold, shedding the queer innuendos that once attracted queer fans. Groups BlackPink, Little Mix, and Fifth Harmony are leading a resurgence of woman-led pop music and picking up where the Spice Girls’ “girl-power” ethos left off. But queer fans still deserve pop icons who are proudly queer themselves, and who truly identify with the fans who contribute to their success.

Enter glam pop-duo Sateen, one of the most recent and visible icons of the queer girl-group resurgence. Sateen began their musical career in Brooklyn in the early 2010s as a husband-and-wife pop band. They later discovered a shared passion for drag performance and became fixtures on the queer club scene as Queenie, the band’s vocalist, and instrumentalist Exquisite. In 2016, Sateen’s identity as both a band and a couple shifted when Exquisite, who now goes by Ruby, came out as a trans woman, and Sateen reemerged, in their own words, as “New York City’s premiere high-femme, high-glamour, queer music duo.” The band now represents a new wave of pop girl groups that are more radically and openly queer, and they’re transforming cultural perceptions of pop, queer identity, and femme-femme love.

Sateen solidified their queer icon status in 2017 with a self-titled EP full of dreamy pop disco that’s as euphoric and danceable as it is politically empowering. “Invoking the disco sound and feel is not just a sonic or aesthetic choice to us—it is a provocation,” the band told Out magazine at the time. “We cannot help but associate disco with our gay forebearers. In creating a sound, melody, or vocal track that is reminiscent of a classic ’70s disco sound, we are attempting to remind listeners that we are gay. We want this fact to be front and center—inescapable.”

Uplifting beats on “Blacklisted” offered dreamy anthems for outsiders of all kinds, while “Free Your Mind” spoke out against the limits of heteronormative social conditioning and gendered expectations: “Do you ever let go?” Queenie asks repeatedly in “Let Go,” speaking directly to those celebrating or grappling with their gender identity. On “Lightning and Thunder,” the lyrics “Let no man divide us, confine us, renown us/ We are the only ones we can trust/ Just us two/ Just me and you” are a shamelessly sexy proclamation of radical queer passion. The song’s lyrics draw from the First Choice soul-disco classic “Let No Man Put Asunder,” transforming it into a gender-inclusive lesbian power anthem with an ungendered narrator. This August, the band released the video for “Gotta Gimme Your Love,” an overtly erotic track that opens with a brief scene of Ruby injecting herself with estrogen, and features the barely-there bikini-clad wives writhing sensually to the music. Put simply, it’s hot, and it’s something rarely seen in pop music.

As an openly queer femme band and couple, Sateen is moving the girl group away from hints and subtext toward an aesthetic and musical style that’s unmistakably queer, trans-positive, and staunchly pro-girl. Still, femmephobia infiltrates many queer communities, often manifesting as a rejection of femme gender presentation, erasure, and exclusion of femme-identified individuals. “Everything that young girls like, especially things that are targeted toward young women and are feminine in presentation, are written off as being frivolous ‘guilty pleasures’ or ‘chick flicks,’” Gutowitz says. “Girl groups have always been unabashedly for young women, so their music isn’t taken as seriously as an art form.”

Queer fans still deserve pop icons who are proudly queer themselves, and who truly identify with the fans who contribute to their success.

And a wife-wife girl group producing femme disco anthems isn’t just a departure from music industry norms; Sateen is part of a radical shift in the way mainstream audiences have typically enjoyed and experienced music created by and for women. “Just because you like typically feminine items, which are often considered superficial, does not mean that others have a right to shame you for that,” the band told Out. When queer femmes are so often erased from queer narratives and discussions of queer media visibility is rarely extended to high femmes, embracing glamour-femme aesthetics and gender presentation can be a political act. “We like to wear makeup, we like to dress in sexy clothing and we like to act in a way that people designate as ‘high femme.’ Navigating the world with this kind of appearance, we cannot help but take note of the demeaning way that people, especially heterosexual, cisgender men, treat us. This is especially apparent in our work as musicians,” the band told Out.

Disco music itself is a symbol of queer culture and gay nightlife scenes, invoking images of sequins and glittering femme bodies—something the “disco sucks” movement of the late ’70s sought to tear down. On their own, femmes may be dismissed as “not queer enough,” and femme relationships can be perceived as somehow less valid, or simply a “phase” due to their gender presentation. “There are two commonly held beliefs about femmes, and both of them are wrong,” Evan Urquhart wrote in Slate in 2015. “The first is that real lesbians aren’t femmes (with the pernicious corollary that all bisexual women are). The second is that all lesbians should be pretty, meek, and gender-conforming in the way our culture expects feminine women to be.” For femme couples like Sateen, as well as girl bands past and present, femme identity can represent a radical act of self-preservation and visibility in the face of internalized gender roles, femmephobia, and misogyny that can pervade both queer communities and mainstream pop culture.

Queer femme culture, Urquhart added, “is as much about subverting feminine stereotypes as it is about celebrating femininity.” Sateen makes the queerness and lesbian subtext that lingered over the Spice Girls and other girl groups even more visible. Ruby and Queenie’s social media presence as a married couple in love, often kissing in photos or lounging side by side in bed, leaves no room for “gal pal” speculation: The two are visibly and openlylesbian romantic partners—or, as one Instagram photo caption puts it, “flamboyantly femme, trans, and cis lesbian married girls.” In making their queerness explicit, Sateen and a new generation of girls groups are powerfully redefining notions of queer femininity and expanding the canon of lesbian cultural icons who are openly queer, proudly femme, and shamelessly in love. “We hope to build a new infrastructure that can support queers, especially femme queers,” Sateen told Out. “We hope that, by fighting this anti-femme attitude, we can build a more promising path for future artists with a similarly marginalized voice and identity.”

Read this Next: Popaganda: 20 Years of Girl Power 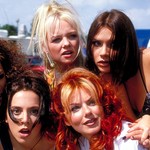 by Carmen Rios
We look back on the impact of the Spice Girls as they embark on their reunion tour—and examine whether the ’90s promises of girl power have come to pass. 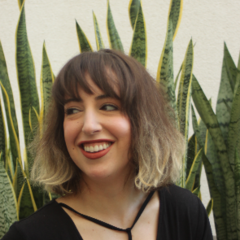 Loretta Lynch on Anti-LGBT Law: "All It Does Is Harm Innocent Americans.”