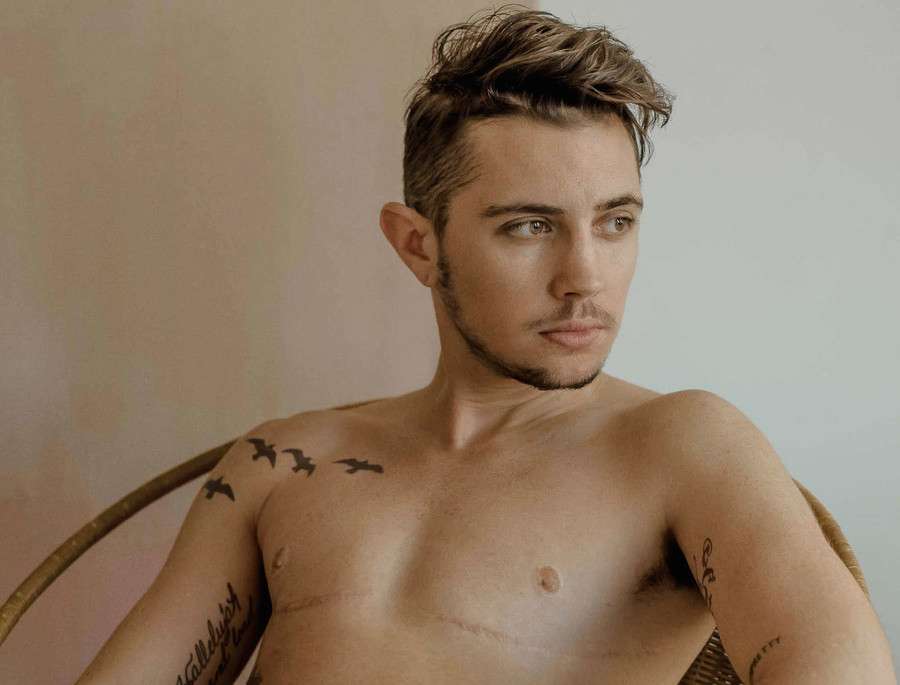 Sawyer DeVuyst hated his body as a teenager, but now his job revolves around the very thing he once hated. He’s a Los Angeles-based transgender model, artist, and actor who runs a photo project called Mine where he takes a daily self-portrait and another called Theirs where he features portraits of other transgender and gender nonconforming people. Both projects aim to change the way transgender people are seen and to tell visual stories from trans perspectives, rather than seeing trans people through the lens of cisgender folks. He also works as a model and actor. In 2016, he was featured in a billboard campaign for the “period-proof underwear” Thinx.

I talked with Sawyer for the Beach Bodies episode of Popaganda about how his relationship to his body has changed since he’s been photographing himself every day. You can listen to the interview or read the whole conversation below.

As a teenager, what felt so fraught to you about going to the beach? Like, when people invited you to the beach, what was the response that was running through your head?

For a long time, like in my adolescence, I stopped going to the beach because I was just so uncomfortable, and I didn’t really have the language to describe why I was so uncomfortable. I was not out as trans then, but I just didn’t feel comfortable in a bathing suit. So I just didn’t go to the beach. Oh god. I think I’ve struggled for…many years, since I was a teenager, with eating disorders. And that was always a big thing for me. I think it was just general hatred of my body, whether it was that I thought that I was too heavy or didn’t like the shape of my body or whatever it was, I did struggle with disordered eating. And I think just being in a bathing suit and showing my body and showing the thing that I was ashamed of was just not happening. It was not gonna happen.

I absolutely love the beach. I’m a Leo; I’m a summer baby. So I grew up swimming in pools at the Jersey Shore. And so now, going to the beach, I’ve been out as trans for eight years, I think, and going to the beach now is like a refreshing thing because I am now comfortable as myself, both physically and mentally, emotionally. I feel like there’s nothing wrong with my body being a trans body. There’s actually nothing wrong with it. There are many different types of bodies, and my type of body is just one of them.

At what point did you feel okay going to the beach again? Do you remember the moment when someone invited you to the beach, and you thought, “Okay, yes. I feel good about this?”

God, the first time I went to the beach again? I think I was living in Brooklyn, and I don’t remember who invited me to go to Reese Beach, but it was…as it was laid out to me, it was a queer, kind of naked, just like inclusive beach. And I was like, “Okay, that seems cool.” And went with a few friends and was just blown away by just the diversity that was there. Like every different kind of person is at that beach. No one’s throwing shade. No one is… It seems like no one really has a care in the world, and it’s really a beautiful place to be. And that beach, I think for me, was a great place to come out as trans and be transitioning. Because I could go there in any stage of my transition and feel comfortable, was really thing.

So now, when you go to the beach, do you take a lay of the land and see who’s around, or do you just go for it and jump in the water?

Yeah, I just go for it [chuckles] at this point. I think I used to, I think right after I had top surgery, I probably would take a little survey and see what kind of people were around. But at this point, I really don’t care. And I used to take more of a survey to see who was around, and I realized that that’s a very privileged statement to make, that I can just go for it and feel comfortable in that way. But it’s taken me a lot of time and mental, just checking in on myself mentally, to get to that place where I don’t really feel expectations around my body based on where I am. Like, when I go to the gym, and I’m changing in the locker room, I also just go for it and change.

There’s not just a flat chest with the “male genitalia.” There are many different types of male bodies.

It sounds to me like you have a bit of conflict around passing, around being in stealth mode, essentially. Do you feel some tension around that? And what is that?

Yeah, it’s hard. I wish I didn’t have to. I wish I didn’t feel that way, but that’s just the way the world is, where people who don’t necessarily fit into a box are hated or chastised or more at risk for violence. And I wish it weren’t that way, but that’s the reality of it. And I think if that weren’t a factor, if I didn’t have to worry about people’s reactions toward me, I would never have gone on hormones. I was fine the way I was. I was fine without top surgery. But I think the pressure to just feel safe was really the thing that was most important to me.

It’s not like you’re entirely in stealth mode though, because you’re a model and an actor, and you put out there very publicly on your profile, very front and center, “I’m a trans man.” So how do you feel about your body being in public so much? How does being in a billboard campaign make you think differently about your body?

[Chuckling.] Yeah! I think there’s still a level of, it’s not even that I wanna be stealth, because I don’t, really. I mean, clearly, because I’m all over the place. But it’s more the choosing of when I can disclose that I’m trans. So like the guy in the cafe down the street, that’s a situation where there’s no reason for that man to know that I’m trans. My landlord doesn’t need to know that I’m trans. ‘Cause I’m just a person doing his thing, going to work, paying my bills. I’m just a normal person. The only difference is that some doctors had some idea about my body when I was a kid, and that’s not necessarily true. So there’s really no reason to tell most people, you know?

And I think the important thing with my modeling and the acting and any interviews that I do, it’s all to do with what I wish I had when I was younger. I wish that I had somebody saying that, “There’s nothing wrong with you.” I wish I had somebody saying, “You don’t need to be ashamed of being trans or being queer,” or whatever it is. And there’s also no problem for, there shouldn’t be a problem with trans people loving their body the way it is. These expectations of appearing cis, it’s not real. It’s complete bullshit, really.

Just like the expectations that I need to hate my genitals or hate my scars that are evidence that I’m trans, that’s all complete bullshit. I think they’re things to be celebrated. It’s just like a diverse body, and there’s nothing wrong with that. 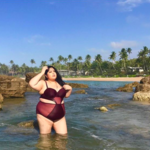 by Sarah Mirk
Every body is a beach body, amiright?