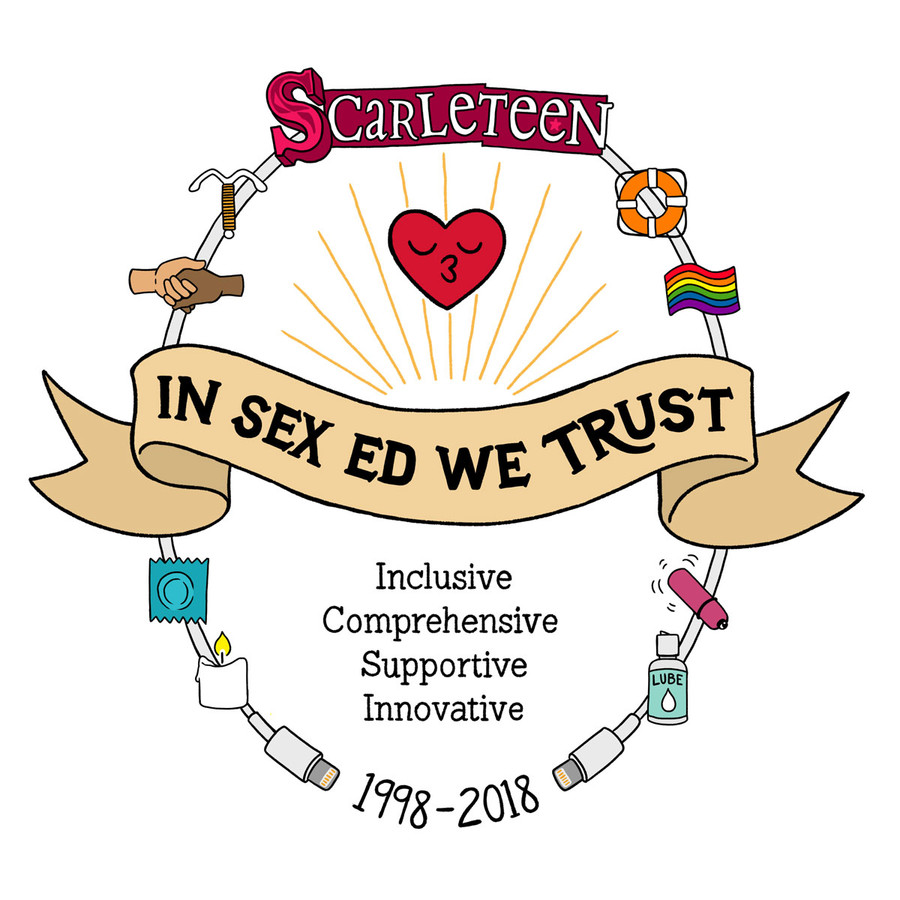 Nerve—which I went on to write for as an adult—shuttered in 2016, a year shy of its 20th anniversary. After being acquired and sold off again twice in the span of six months, the digital magazine dedicated to sex and culture with a once-thriving community of bloggers, personal ads, art, and chat forums, disappeared from the internet, archives and all. Scarlet Letters, founded by and serving queer women, has also disappeared, but its archives remain safely stored on DVD in founder Heather Corinna’s home.

Corinna, a Montessori teacher, felt especially compelled to answer the basic sexual health questions sent in by young people. Scarlet Letters created a subsection of the site called “The Pink Slip” that comprised five pages of sex-ed fundamentals, and in December 1998, Corinna introduced a landing page just for visitors under 18: Scarleteen.

It took me another couple of years to come out, but access to sites like Nerve and Scarlet Letters presented queerness in a no-big-deal way, in a tone that eliminated any potential shame or judgement. Before anyone was indoctrinating me about sex IRL, I understood that desire wasn’t inherently wrong or bad. The sheer volume of sex-celebratory content I was consuming also put me squarely in control of my own experience. Navigating these sites on my own—particularly with my interest in reading rather than looking at content—was a self-led sexual exploration. The early internet gave this supportive and sex-positive community a place to publish its work, providing a dedicated cultural space to examine sex and sexuality.

According to Dr. Sharon Lamb, a professor of counseling and school psychology at UMass Boston and founder of the Sexual Ethics for a Caring Society Curriculum, these spaces are essential for processing. “Lots of things kids encounter are damaging and dysregulating, but there are places in the culture where it gets processed. If a child witnesses violence, [their] school has mechanisms in place to help [them] talk about it,” she notes. “But looking at something sexually disturbing on the internet is so private that there isn’t any cultural or social mechanism to help them with that experience.’”

For both sexually precocious young people like me and those who are sexually marginalized, having a place to unpack ideas about sex is vital to pursuing a healthy relationship with it. Twenty years later, that sex-media landscape has been all but decimated. Nerve and Scarlet Letters were already long gone, but in January 2019, BuzzFeed laid off 15 percent of its staff, including its health-news desk (the team that managed sex and relationship content), and all but one member of its LGBT team. Grindr also shut down its digital magazine INTO (for which I was also a contributor), which featured sex and relationship content for a surprisingly diverse queer audience—an impressive feat given the deeply segregated queer media landscape that funnels most of its resources to white, cis, gay men. But Scarleteen and its inclusive, comprehensive, supportive information for teens and emerging adults, endures.

“Good sex and relationship content is always the first on the chopping block for people,” Corinna tells me. “Or [publishers] want to tweak [that content] so it’s entertainment, effectively, and they can make money off it. The truth of the matter is that good sex information is not profitable. It just isn’t.” 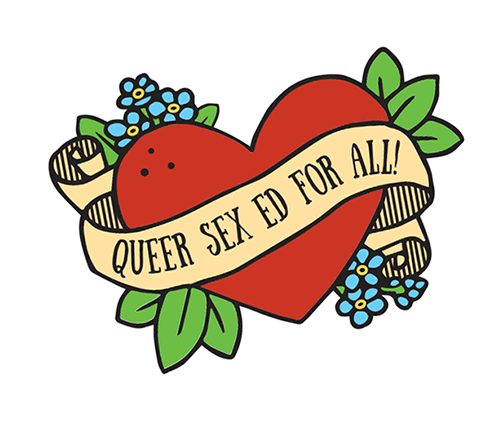 Scarleteen just celebrated its 20th year in publication, and Corinna argues that it has endured not in spite of being queer-founded, queer-run, and independently funded by a group of about 500 donors, but because of those things. They belong to a small club of independent, queer women’s media that has survived as corporate-funded digital media flounders: it includes the online magazine and social network Autostraddle and Our Bodies, Ourselves, the nearly 50-year-old grassroots nonprofit that’s synonymous with the women’s health movement. “Of course queer women are figuring out how to sustain things better than other people!” Corinna exclaims. “Look at the fucking shit we have to carry. We are badasses.”

That’s not to say there’s no emotional toll on independent creators of queer sex content that’s informative rather than prurient. Backlash from internet mobs, advertisers, publishing platforms, and social-media content moderators make it an exhausting vocation—especially when coupled with advertisers’ long-standing aversion to associating with progressive sex media in the first place, making sex content becomes incredibly burdensome. “There’s a lot of reaction that you have to manage when you are publishing things about sex and relationships, especially if you’re publishing anything other than the fluffiest of entertainment and information that directly serves the status quo,” Corinna says.

Scarleteen just celebrated its 20th year in publication, and Corinna argues that it has endured not in spite of being queer-founded, queer-run, and independently funded by a group of about 500 donors, but because of those things.

SESTA-FOSTA is not Corinna’s first legal hurdle. In 1998, the passage of the Child Online Protection Act (COPA) was intended to restrict children’s access to sexually explicit material by imposing criminal penalties on those who published digital content deemed “harmful to minors.” In practice, COPA limited sites like Scarleteen from providing sex-ed information, too. Scarleteen, along with other digital publishers like Nerve, Salon, PlanetOut, Philadelphia Gay News, and UrbanDictionary, joined the American Civil Liberties Union in arguing that COPA was unconstitutional and a violation of free-speech rights. Six years and three separate rounds of litigation later, COPA was finally and permanently struck down in 2008. “In the end, it’s very satisfying to kick the U.S. government’s ass,” Corinna says.

Corinna sees a way that digital platforms could attempt something similar in protest of SESTA-FOSTA, but doubts the same motivation to protect sex content still exists. “Any of these outlets could choose to do what we did in the face of COPA,” she notes. “Any of them could fight it. But they’re not. And I think it’s because they don’t really want to.”

Starting Scarleteen at the dawn of the internet gave the site a lot of room to grow, fail, and thrive while remaining firmly planted in the cultural consciousness. “We got to build up our visibility almost concurrently with the visibility of the internet,” says Corinna, who can’t imagine how they’d start the site now. In part, Scarleteen’s success seems tied to its founder’s skepticism of technology: Corinna, who coded the site by hand until 2007, remains profoundly suspicious of new platforms, and their instinct to refrain from hitching Scarleteen’s wagon to any shiny new internet phenomenon that comes along has largely served them well. There were times when Scarleteen could easily have migrated to LiveJournal, Blogger, or Medium, but Corinna’s fastidious reading of each promising new platform’s user agreements led them to decide that the risk to their creative license was too great.

No one who works on Scarleteen has ever been in it for the money, and Corinna freely admits that, under the guidance of someone more business-minded, the site may have been more profitable. But could it have lasted this long if that were the case? Scarleteen exists because people needed a service and Corinna, a self-described reluctant leader, provided it. They, too, were a sexually precocious child who began racking up positive sexual experiences in adolescence, and they envisioned Scarleteen as a destination for similarly precocious teens. As young people began receiving better access to good sex ed, Corinna reasoned, the site would grow more radical and progressive. But what they found was that, with the rise of purity culture and abstinence-only sex ed, the site’s readership began skewing older and less experienced. By the early 2000s, Scarleteen’s chief demographic had become young adults 18–24, often from deeply religious backgrounds, who were steeped in fear- and shame-based ideas about sex and looking for remedial content.

“Of course queer women are figuring out how to sustain things better than other people! Look at the fucking shit we have to carry. We are badasses.”

“Having all of these people dealing with Evangelical stuff on Scarleteen is so far removed from my life and my sensibility,” Corinna recalls, with what sounds like a heavy heart. “I certainly didn’t think I would be dealing with so many people who are afraid of being sexual.”

Their worry about the future of sexual development lingers. They often field questions about children taking in traumatic sexual images and then, in turn, enacting traumatizing sexual behaviors. What that hypothesis fails to consider is that children who see traumatic images may in response come to avoid sex altogether: “They think what they’ve seen [in porn] is what sex is, and that’s horrifying to them.” I admit that I often bristle at the judgement and morality baked into the notion of “developmentally appropriate” sexual material, but Lamb has a different, Montessori-inspired take: If a 3-year-old wanders over to a 5-year-old activity and masters it, she suggests, that’s great. But if the younger child struggles, a teacher is stationed in the room to gently redirect and suggest something they can master, because it’s more developmentally appropriate for that particular child.

“So what can you master? What can you understand at different ages?” Lamb asks. “When a kid is confronted with something they’re not ready for, sometimes they obsess over it or feel incredibly guilty for whatever pleasure it might bring them. Somebody who’s better educated has more regulatory capacity around those things.”

It’s never occurred to me think of engaging with sex media as skills mastery before, but I realize that finding Scarleteen—and, more specifically, accessing it alongside written erotica, helped give me the regulatory capacity to process the things I was curious about. In fact, it led to a relationship with sex so novel in its healthfulness that I was deemed a qualified enough authority to write about it as an adult. When I tell Corinna that I feel like the quintessential Scarleteen success story, they respond with exactly the ethical thoughtfulness you might expect. “Sometimes people don’t really realize what a privilege and an extension of trust it is for somebody to let you in at that age, especially to these parts of their lives,” Corinna says. “It’s a big deal to be part of forming who someone is.”

Read this Next: Digitizing the Dead is Capitalism’s Next Ghoulish Move 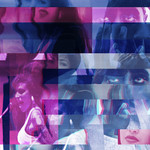 by Chanelle Adams
When celebrities, especially musicians, die, fans rightfully grieve for them, but what happens when mourning marries capitalism? 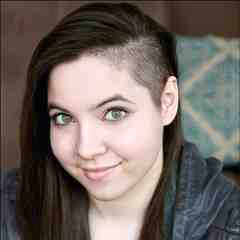 Mariella Mosthof is a queer femme sex and culture writer whose work has been published at Nylon, VICE, i-D, Broadly, Into, them., Glamour.com, Slate, and more. She’s been nominated for a James Beard Media Award and she lives in New York City.