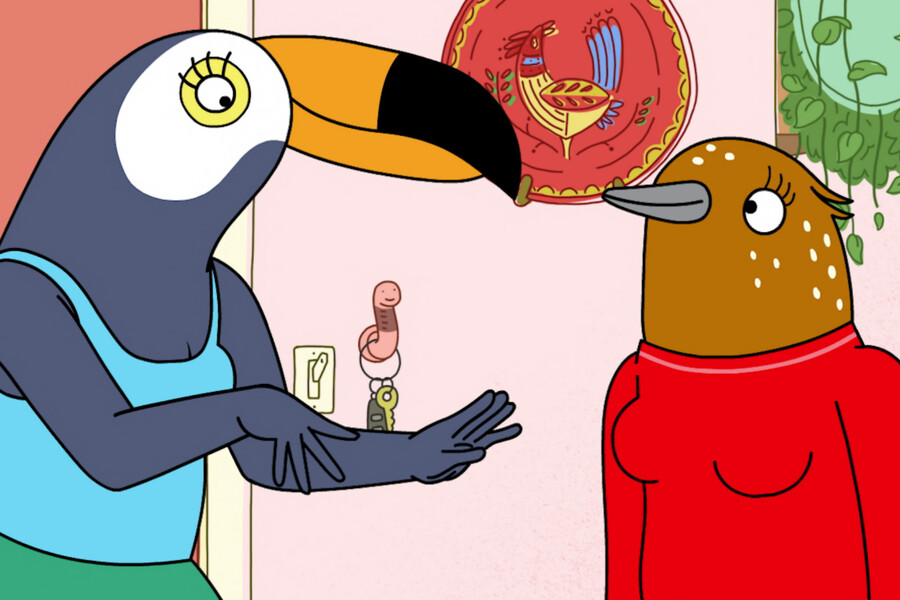 When we last left avian best friends Tuca (Tiffany Haddish) and Bertie (Ali Wong), they had entered a new era of their friendship. Bertie was adjusting to living with her boyfriend Speckle (Steven Yeun) while dealing with her own sexual trauma and career uncertainty; Tuca was newly sober and trying to figure out what to do with her life. The 10-episode first season of Lisa Hanawalt’s imaginative adult cartoon didn’t  provide any easy answers or pat resolutions; instead, it set a path for Bertie and Tuca to build a healthier relationship with one another. The show was a critical darling, racking up rave reviews and revitalizing interest in adult cartoons helmed by women.

A lot has happened in the two years since Tuca & Bertie premiered on Netflix, including a notable change regarding gender inclusion in animation. At the time, fellow Netflix show Big Mouth was the only other adult cartoon that prioritized gender parity in the writer’s room, and the streaming network seemed ready to do the one thing Adult Swim couldn’t—namely, give women the funding and support to produce funny, successful animation for adults. That revelation was short-lived, with the news of Tuca & Bertie’s abrupt cancellation dropping shortly after its well-received first season. In an unexpected twist, network TV stepped into the breach; FOX in particular has evinced a newfound respect for female-led adult cartoons, with a string of animated shows created or cocreated by women: Duncanville, Bless the Harts, The Great North, and HouseBroken.

In the company of these new shows, Tuca & Bertie still feels like an outlier by keeping its narrative focus solely on female friendship. And now, after a year in limbo, the critical darling has returned for a second season in a surprising place: Adult Swim. The bird besties are back; and with the show’s entire creative team on board, the network long known as a boys’ club is poised to give Tuca & Bertie the space to grow and mature. Judging by the first four episodes of its second season, that is exactly what Hanawalt and her team are doing. In the second-season premiere, “Bird Mechanics,” the title characters are dealing with the struggles of dating. Tuca is assessing her options by turning her dating life into a reality TV–esque competition; Bertie, meanwhile, is “dating” potential therapists in the hope of finding one she feels comfortable with.

The juxtaposition of Bertie having nightmare therapy sessions and Tuca “eliminating” potential partners works perfectly to highlight the struggles of building new relationships. So much of life involves trying people out to see how they fit, and the plot point illustrates that while we may need each other, many of us don’t have the tools to build lasting relationships grounded in mutual respect—especially in a time when even friendships are increasingly framed in cost-benefit terms that suggest we should view interacting with loved ones as a form of labor. The first therapist Bertie meets is brutal: “It’s clear that Tuca is a toxic element in your life and you need to cut her out”—a sentiment that mirrors the recent harmful rhetoric about troubled friends as a barrier to personal happiness. The episode’s final moments drive the point home when Tuca writes “Bertie is keeping me alone” on a plastic cup.

One of the most fascinating things about Tuca & Bertie is how it refuses to be an ensemble show. Most adult cartoons—like FOX’s recent slate of offerings, as well as Hanawalt’s first animated hit, Bojack Horseman—are about families or family-like groups. There are characters we see in every episode, like Speckle, but for the most part the show is a two-hander. This can lead to story challenges, most notably that Tuca and Bertie only have each other; there’s no larger friend group to serve as an argument moderator or neutral conflict assessor. Speckle is very respectful of their friendship, mostly staying out of their way when there’s any sign of trouble. While watching this season, I couldn’t help but think of Girls, which surrounded the constantly feuding Hannah (Lena Dunham) and Marnie (Allison Williams) with other friends who were able to tell them when they were both in the wrong.

Tuca and Bertie only have each other; there’s no larger friend group to serve as argument moderator or neutral conflict assessor.

There’s no question that Bertie is in the wrong in the second episode, “Planteau,” in which the best friends attend a chaotic girls night out. Speckle’s soon-to-be-married sister decides to have her bachelorette party in Planteau, a city inhabited by plant people. Tuca, as usual, is the life of the party, but Bertie finds herself consumed by her characteristic crippling doubt. Though she’s promised Tuca an evening of sober solidarity, it’s not long before she  breaks that promise in a desperate attempt to, for once, have a good time. It’s easy to empathize with both birds: Bertie had an agreement with Tuca, and defaulting on it was disrespectful. But the moment of rebellion was necessary for Bertie, who spends so much time in her own head she can’t seem to enjoy anything. It’s a relief to finally see Bertie let loose a little, with Wong letting some of her brash, loud, sexual comedy persona spill out.

As it was in the show’s first season, Bertie’s anxiety stays at the center of the story. But Tuca gets a moment to shine in the season’s fourth episode, “Nighttime Friend,” which explores her trouble with insomnia and loneliness. Here we learn that Tuca doesn’t really sleep; instead, she walks the streets at night, observing everyone and everything around her. She gets a late-night snack of boiled eggs. She goes to a store that’s open late and doesn’t buy anything. But her main activity is going to see her cantankerous aunt Tallulah, played with easy humor by Jenifer Lewis. Their relationship is much the same as it was in Season 1’s “Plumage,” with Tuca subjected to her aunt’s cutting manipulation. And it is in these scenes that Haddish really flaunts her emotional range, her usual confident tone eroding into something much quieter and unsure. Having only seen the first four episodes, it’s difficult to know if Season 2 will do a better job of giving Tuca space to grow as a character, but “Nighttime Friend” is definitely a high point.

All this emotional storytelling is couched in Hanawalt’s fluid animation style, with plenty of side gags and unique takes on well-worn social topics. The season’s third episode (“Kyle”) tackles sexual harassment, #MeToo, and “cancel culture:” Pastry Pete (Reggie Watts) is back and Bertie doesn’t understand why the public is embracing him again. Her solution is to find her “inner bro,” whose name is Kyle; he teaches Bertie how to assert herself by harnessing her inner douchebag, an intervention that lets her work through her repressed aggression. The highlight of the episode is a musical number about being a bro that showcases everything wonderful about Tuca & Bertie—the humor, the playful animation, and the top-notch voice cast. Those who were worried about how the change of platform would change the show can rest assured that it’s still the special show we all fell in love with. With Tuca & Bertie, Hanawalt and her team have created something truly unique, with a world that grows organically with every episode. And once Tuca gets more space to shine, the show will get even better.

Read this Next: Buzz Off 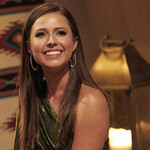 by Andréa Becker
This show can’t run from its long history of peddling purity myths.