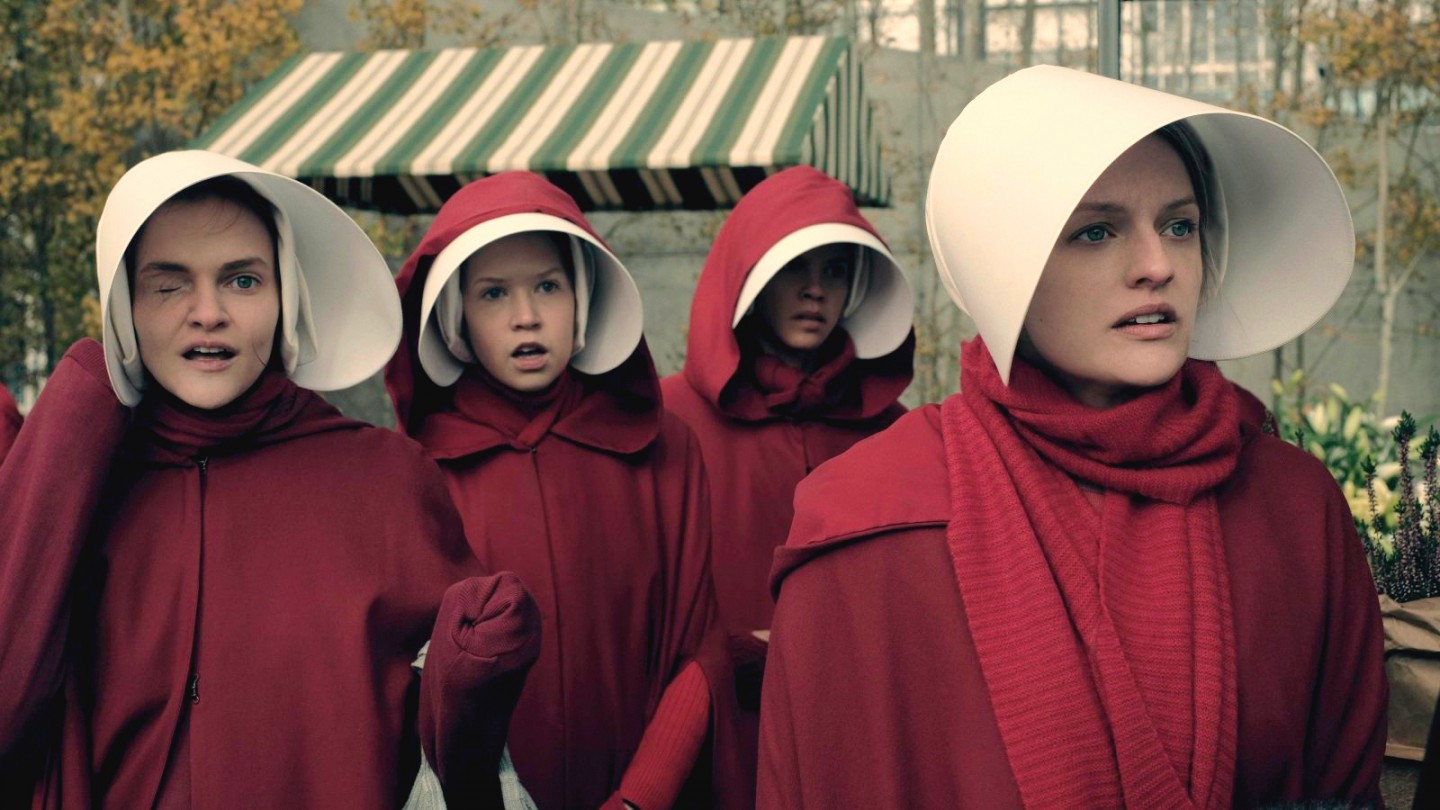 Nina Fiore was the executive story editor for The Handmaid’s Tale before being promoted to coproducer for the show’s second season, which premiered April 25. She spoke to Bitch about adapting Margaret Atwood’s vision and writing a show about sexual violence in the #MeToo era.

How did you make The Handmaid’s Tale your own without losing the spirit of the original?

You don’t want to lose the spirit of the original because it’s so amazing. Margaret Atwood is incredible. From season 1 to season 2, we all reread the book and thought about the things that we loved in the book [and the] places that we wanted to expand on. The show makes you hate the Commander and Serena Joy, but our villains are so complicated. Our heroes are people like you and me. What you would do to keep yourself sane in an environment that’s so controlled? What would you need to maintain your hope?

There’s a passage where Offred is walking to the market and Japanese tourists ask her if she’s happy. And that little passage was expanded into episode six in the first season. We created a situation where Offred was asked that question by a non-Gileadean person. Basically, a couple sentences in the book can become the kernel of an idea for an episode. The Handmaid’s Tale [is told] specifically from Offred’s point of view, but what’s nice about TV is that you can dig a little bit more into [the perspectives] of different characters.

One of the biggest expansions in the first season was Luke’s episode, “The Other Side.” Some fans wanted that time to go to Moira. Will we see more of Moira’s story in season 2?

In the book, Offred muses on the three different things that could’ve happened to Luke. All she heard was a gunshot, [which] was a perfect way to frame episode seven. When you look at how this show is constructed, a lot of it echoes how it affects Offred. Moira is her touchstone—sort of like her spirit animal. Flashbacks [help the viewer] gain more insight into Offred’s character or what’s going on in the episode. [In Season 2], my writing partner, John Herrera, and I went through so many iterations [of our episode] because we had too much stuff in it. We wanted to tell so many different stories, [but] we’ll see more of Moira for sure. She’s one of my favorite characters.

There’s one change from the novel that jumped out at me: There’s a scene where the handmaids stone an alleged rapist to death. In the novel, June finds out later that he was a member of the resistance, but we’re left to wonder about that in the show. What led you to make that choice?

There’s so many things in the book we have yet to explore. Offred was so focused on missing Moira and Janine telling her that she thought she died, that we really wanted to feel Offred’s sadness and rage. We didn’t want to short shrift that because [then we’d be] dealing with two different things. If we put that in there, we might mess with the character trajectory and the trajectory of all the things they’re trying to take away from her. They took her name, they took her friend, they took her family, and it was a moment that we wrestled with, and I’m sure we will look for a different place for that.

There’s an obvious cultural link between The Handmaid’s Tale and the #MeToo movement. How has the current conversation about sexual assault informed your approach to the show?

It’s important for our show to be part of the resistance and follow Atwood’s vision. I hope people continue telling their truth because it’s the only way these types of assaults and incidents will stop. What I really love about the show is that it tells the story of a woman who’s in a horribly controlled, sexually violent environment, and she’s still fighting for her sanity and her humanity to keep the parts of her that make her her. In the first season, she says, “My name is June, and I intend to survive.” With #MeToo and #TimesUp, women all over our industry and other industries [are] saying, “This is my name, and I intend to survive. And I’m going to call you out, and I refuse to be silent.”

Atwood has had some strong words about #MeToo. She wrote in an op-ed that the impetus behind #MeToo is in danger of becoming a “culturally solidified lynch mob habit.” Do you think she’s right, or did she go too far?

I don’t really know how to answer that because she has her view and I respect that. I try to stay out of what other people think about what’s happening. To be part of a time where women are standing up and refusing to be silent is amazing. I saw my sister put up #MeToo, and it broke my heart. I had to look at my own history as a gay woman. I feel like I read very gay, so some of the sexual harassment I’ve experienced is kind of bizarre—and I had to put down #MeToo because I too kept silent about something. It’s imperative for all these people to come forward with these experiences because it’s the only way we’re going to create safer environments. People have to report an issue if they’re made to feel uncomfortable. Right now women are like, “God, our silence is causing more suffering.”

Between hearing about sexual violence in the news and being immersed in it at work, how do you keep yourself from being overwhelmed?

I started eating a lot more chocolate, and I play dodgeball in a bunch of leagues in Los Angeles. Before I got hurt, I was on the U.S. national dodgeball team, but last year I wasn’t able to play or try out.

We also talk about it in our writers’ room. Bruce Miller is an incredible human, and all the writers on our show are wonderful, special people. Bruce has created a space in our writers’ room where we can talk about how heavy and sad these things [are]. We’ve become a family, and some days it is hard. Some days you just want to cry, but it helps to have a safe place to be with it.

The first season addressed gay and lesbian persecution in Gilead, but not prejudice against people of color, which drew some sharp criticism. When we were talking about Moira, you used the phrase “spirit animal.” And I think that was at the core of those criticisms of the first season. [The story] was based on historical Black pain being filtered through whiteness. What was your approach to the question of white supremacy in Gilead going into season 2?

We want to bring up more of these issues within Gilead, but in an organic way. In season 2, we serviced that a lot better. [We tried to give] Moira her own story and base separate from Offred. We’re very much aware of these issues, which is why we tried to put more diversity in the show by bringing up these issues of race in Gilead in a natural way that is organic to the story. And we’re always looking for opportunities to present these issues in the right way so that they’re resonant and they have staying power.

Did the current outbreak of visible white nationalism in America change anything for you, in terms of how you approached these things on the show?

I think it made the world that we live in scarier, and of course that’s going to permeate the show. When you’re a writer, you bring that experience to the table. The extreme version of any morality you’re dealing with in the show, like the gender traitors or the abortionists or the people who got put on the wall who were not conforming to Gilead’s sense of rightness is important because it’s exactly what Offred is wrestling [with], fighting against, and looking to survive through.

The season 2 premiere marks a dramatic change for the show. After last year’s laundry list of injustices, are you hoping to inspire a renewed sense of resilience?

I think the show will always have its resilience in its characters based on the situation [they’re] presented with. That’s partially what makes this show so wonderful. You [can] look at [June] and go, “Wow, she’s resilient, she’s strong, her humanity can’t be stamped out.” That’s what I love about the character and the show.