This article contains spoilers for the second season of GLOW.

Whenever someone asks me why I like wrestling, I point them to a training montage in GLOW, a half-hour Netflix comedy based on the eponymous 1980s women’s wrestling show. In the scene, Ruth “Zoya the Destroya” Wilder (Alison Brie) and Debbie “Liberty Belle” Eagan (Betty Gilpin) are taught how to take bumps (be on the receiving end of a wrestling move) without hurting themselves or each other. “It’s like a trust fall,” Debbie says as she prepares to leap onto Ruth in a crossbody block from the second rope.

Wrestling, as this scene shows, is not (just) about gratuitous violence, but also showcases athletes working in concert to create a physical story. So when a wrestler punches their opponent while simultaneously stomping the mat to create more aural impact, puts their hands up to protect their face as it’s smashed into the top turnbuckle, or reaches out to catch their opponent as they plummet toward them from the top rope, each action is carefully performed to minimize impact and injury.

As Cassidy Dawn Graves wrote for Bitch in August 2017, GLOW “consistently shows the rigorous work that goes into keeping wrestling safe, especially for those who’ve never done it before. Women wrestlers are shown learning and practicing moves, which is the only way they’ll know if a physical act is comfortable for them.” This is why it’s so shocking when Debbie, coked out of her mind, breaks Ruth’s ankle during a match in season two.

The Festival of Urgent Reinventions

The fictional accident directly corresponds to the real-life injury women’s wrestler Sexy Star, best known for her work on the El Rey Network’s Lucha Underground, inflicted on her opponent Rosemary in a match last August.

Sexy Star maintains an armbar submission hold on Rosemary long after she taps out and the referee ends the match. Though it’s common in kayfabe (the fictional reality of wrestling) for the heel (bad guy) to continue beating down their babyface (good guy) opponent after the match, it’s agreed upon beforehand. Rosemary said she was unaware that Sexy Star would continue the hold after the match officially ended. “If you take liberties with someone’s body when they are giving it to you and trusting you to keep them safe, you are not tough,” Rosemary tweeted. “You are an asshole. And you don’t belong in this business.”

Since the incident, Sexy Star has been rightly ousted from the independent wrestling community. “Sexy Star will never set foot in one of my locker rooms,” former WWE superstar and current indie wrestler and promoter Cody Rhodes tweeted. “I hope others follow suit.”

Independent wrestling star Mia Yim works with organizations such as Safe Horizons’ #PutTheNailInIt campaign to raise awareness about domestic violence. In an August 2016 interview with HuffPost, Yim explained the differences between what she chooses to do in the ring and the real-life intimate-partner violence she endured. “We choose to get in the ring,” she said. “We’re trained to keep ourselves and our opponents safe. But when someone brings it back home, that’s not wrestling anymore. That is not entertainment. That is just straight abuse.” 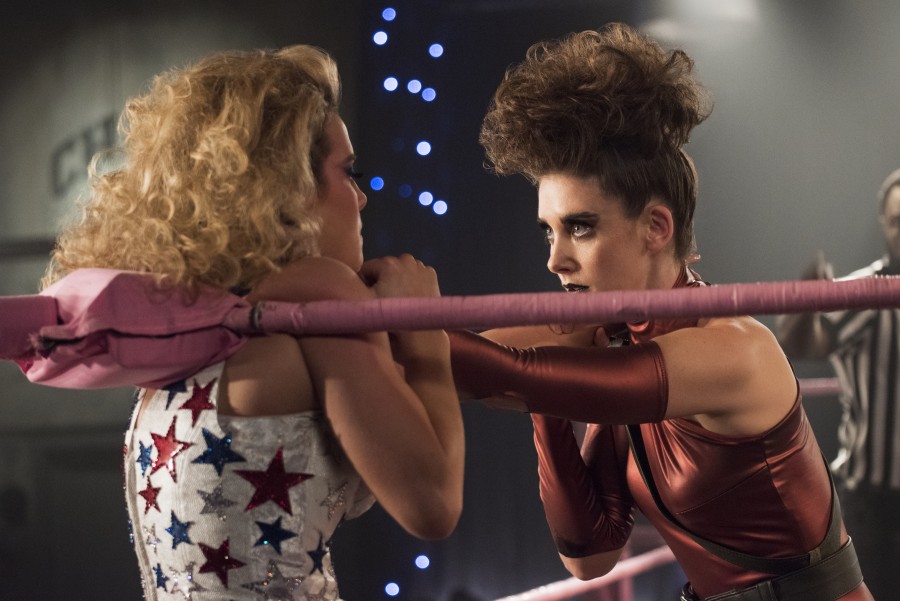 Debbie maiming Ruth is not the only case of ’80s art imitating 21st-century life in GLOW’s second season. Any show, especially one about women in a male-dominated industry, would be remiss not to address the #MeToo movement. Vince McMahon, the patriarch of modern wrestling, was accused of sexually assaulting a tanning salon employee in 2006, and has abetted many WWE storylines involving the hypersexualization and degradation of women wrestlers. One GLOW storyline, in which Ruth takes a meeting in a TV executive’s hotel room, echoes allegations against powerful men, including Harvey Weinstein, Bill Cosby, and Steven Seagal.

Though Ruth tells the exec that she loves working on GLOW because it’s the first chance she’s been given to play a dynamic female character, he insists that he’ll cast her in more prominent roles if she agrees to sleep with him. “This is the most exciting job I’ve ever had,” Ruth says. “I’ve been acting pretty much my whole life and it’s always just another audition, another meeting, another year of waiting for someone to give you permission to do the thing you want to do. And finally I’m getting to do something. And it feels different. I feel different. Strong. In control.”

Though sexual harassment was widespread and often swept under the rug during GLOW’s heyday, the Netflix series names and shames that problematic behavior. Whether it’s the ’80s or in the throes of #MeToo; in the ring or in their personal lives; women in wrestling are constantly having their consent violated.

In the second season, Rhonda “Britannica” Richardson (Kate Nash) is forced to marry her stalker fan in order to obtain a green card; other cast members receive dick pics via mail (how retro); and Sheila “the She Wolf” (Gayle Rankin) feels obligated to greet her rabid fans who wait outside for her after the show. These storylines mirror the violation of consent real women wrestlers face: WWE wrestler Paige was recently assaulted by a fan, and her colleague, Sasha Banks, has drawn criticism—mostly from male fans and wrestlers who don’t understand the risk of being an African American woman in the public eye—for creating boundaries around her interactions with fans.

“I don’t tweet out what hotel I’m at. I don’t tweet out what airline I’m flying. I do tweet you what arena I’ll be performing at, so I do expect fans at the arena, and I’m so happy to sign at the arena, that’s fine because I’m telling you where I’m going to be at. If I see you in public, that’s fine,” she said on the Sam Roberts Wrestling podcast in September 2017. “But when I’m at an airport at four in the morning and I see somebody with a carry-on and they open it with a hundred items of everyone and they’re bothering everybody to get an autograph, and I see it on eBay—that’s not okay to me.”

Given GLOW’s focus on consent in both seasons, Debbie’s treatment of Ruth during their match should’ve been explicitly called out. Instead, the show frames Ruth’s broken ankle as atonement for sleeping with Debbie’s husband, and a penalty she must pay to mend their friendship. “It’s just a job,” Debbie says, minimizing Ruth’s season-ending injury and flying in the face of everything we’ve learned about wrestling’s big no-nos. Though the two do eventually have a huge argument that resolves many of their issues, I’m not sure Debbie deliberately hurting Ruth should be the catalyst for their reconciliation. Is making amends really worth a broken ankle?

GLOW made some missteps this season, but it’s still drawing fresh eyes to wrestling and trying to educate its audiences about consent in wrestling during the #MeToo era.

Scarlett Harris is an Australian culture writer. You can read her previously published work at her website, The Scarlett Woman, and follow her on Twitter @ScarlettEHarris.

Every Breath You Take