A.N. Devers and the Second Shelf Are Paving the Way to a More Feminist Literary Canon | Bitch Media 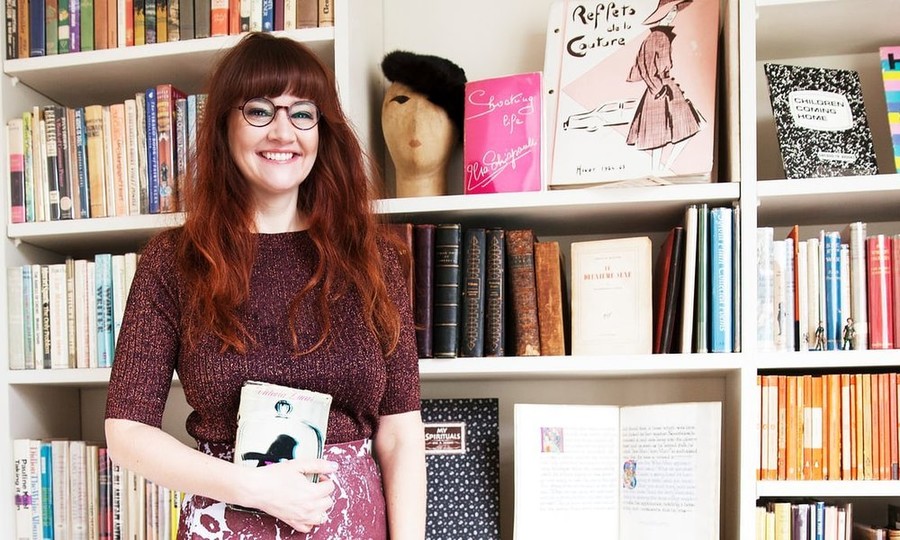 In London’s bustling Soho neighborhood, A.N. Devers’s feminist paradise for bibliophiles is thriving—and changing the way collectors think about the literary canon. Though Devers opened The Second Shelf in 2018, it’s really an extension of Devers’s lifelong love of books. “I was a voracious reader growing up, like anyone who ends up working in bookstores,” she says. What began as a Kickstarter campaign to help fund the inaugural issue of The Second Shelf’s eponymous quarterly journal has now become a vibrant community of collectors and readers dedicated to rediscovering and uplifting the work of women writers, especially those who are often overlooked. “It’s a funny feeling of excitement and alarm, because you learn about a woman’s life,” Devers says. “[But] it is a double-sided coin when you realize the reason they have been forgotten is often inequality.”

The Second Shelf’s evolution is still a bit surreal for Devers. “I feel lucky to do what I do and the fact that The Second Shelf exists as an actual bookstore is still hard for me to believe,” she confesses. “It’s an honor to get to talk about these women writers and sell [their books].” The Second Shelf’s first and rare editions—sourced from book fairs and used bookstores—are as intersectional as they are innovative. “The Second Shelf can’t address gender inequality without acknowledging [intersectionality], so I’ve done and will continue to do my best to include as many writers from as many places and backgrounds, writing in as many genres as I can,” says Devers. From the vibrant pages of the first issue of its journal to the envy-worthy editions showcased on their Instagram page, The Second Shelf highlights giants like Sylvia Plath, Audre Lorde, and Muriel Spark alongside lesser known greats like Uno Chiyo, Bessie Head, and Shouri Daniels. Online and off, The Second Shelf is redefining the way collectors and readers celebrate women’s literature.

Thankfully, Devers and The Second Shelf team are paving the way toward a better canon, one that isn’t afraid to pay homage to women and the power of their written truths.

Which stories shaped you into the feminist and writer that you are today?

The first author I truly fell in love with was Marguerite Henry, who wrote an award-winning children’s novel called King of the Wind and a series about the wild horses of Chincoteague Island. Then it was a rapid and relatively normal path of consumption of middle-grade and young-adult novel series. I loved The Boxcar Children, Laura Ingalls Wilder, and Ramona Quimby. I read as many girl-detective novels as I could get my hands on—Nancy Drews, Trixie Beldens, and the Dana Girls. Little Women was hugely important. As was the Susan Cooper fantasy series, The Dark Is Rising.

I inhaled books and wasn’t particularly picky. I had broad tastes. But by high school something happened that I think is fairly common: I started really believing that the best books were those I was told were most important in English class, and most of those writers were male. I think this happens for so many reasons, but a big [one] is needing to keep boys engaged in the classroom, and the assumption that boys won’t read books by women. I ended up assigning myself women writers like Sylvia Plath, which is what happens to a lot of readers who care about work by women.

What was the genesis of The Second Shelf and what inspired you to create this community?

I was first introduced to rare books as a freelance arts and culture writer, and then I made a friend in Brooklyn who was in the rare-book trade. I started going to book fairs to see her set up. I am a book nerd; rare-book fairs made me fall in love with books in a new, good way, but I did notice that there were a lot of men in the room and a lot of books on the shelves were by or about men. That started me thinking about how it must be an issue for the legacies of women writers.

The magazine came out of wanting to do a rare books catalog, but to make it a little different and commission women writers to write about the books and authors The Second Shelf has in stock. All of this happened rather fast in terms of having a store and a growing community. I’ve been learning the rare-book trade for a few years, but having a bookstore wasn’t actually anything I’d entertained. It was a far-away dream come true by a random email in my inbox and the offer of a lease with good starting rates. I thought it was spam. None of it would be possible were it not for the energetic support on Kickstarter and on our social media.

What was the biggest struggle you faced while bringing The Second Shelf to life? Did that struggle teach you anything new about yourself as a writer, collector, or reader?

The biggest struggles are money and an ongoing time deficiency. I have a young son and am in a newish country starting a bookstore, a quarterly [journal], and a website, and it’s all happening so fast. It’s all been a challenge and I don’t get a lot of sleep. The only money I make right now that doesn’t go back into the business or to pay staff is what I make from freelance writing, so I am still writing. And I’m glad, because I am a writer and don’t think I can give it up.

One thing I have realized about myself is that I am more productive if I’m busier, and I am more engaged with work when I have a lot of different things to do. I have bona fide attention deficit disorder, [so] for me it’s good to be able to dive in and out of interesting and diverse work, however exhausting.

In the introduction to the first edition of The Second Shelf’s journal, you wrote that “women deserve a space to explore our own literary history and to foster and care for our own writers’ legacies.” Has cultivating that space for women writers changed your relationship to the publishing industry and the literary canon?

It has! That primarily comes from being in charge of myself and my business. Opportunities come for us to collaborate and support women writers—that’s a small way we can have a positive impact on publishing. As for the literary canon, it’s going to take some time and we are just one small company. It will take a lot more than us to change the canon. My friends Heather O’Donnell and Rebecca Romney of Honey & Wax Booksellers started a women’s initiative [through] the American Antiquarian Booksellers Association. They also sponsor a book-collecting prize for women. These are vital programs that build awareness and access to the book trade in a way that might start opening up the canon.

Trump, #MeToo, and all of these other crises that have come to pass, as well as the daily inequalities women face in their lives, aren’t really new crises—they are simply ongoing reasons for feminists to focus on what we can do to redress these inequalities and abuses.

The Second Shelf and its team have been very vocal about the way gender impacts the perceived value of an author’s work within and outside of the collecting world. At a time when bookstores and the publishing industry seem to be flourishing, what can book lovers do to dismantle the patriarchy’s grip on the canon?

It starts with publishing women, and being fair to women in how their books are designed, marketed, and reviewed. Critics need to review more women and publishers need to be aware of how they gender their authors. There was a publisher in New York City [that] was having its authors cook baked goods and bring them to events. Fun right? But in hindsight, I can’t remember a male author doing this. It’s a memory that hasn’t aged well. We know women are treated differently, paid differently, hit glass ceilings in publishing, and do more work, while Dan Mallory-types breeze into solid jobs. All The Second Shelf can do is point out the great work of women writers, show off and sell their books, hire writers for our magazine, and pay them, and hopefully people will support us by buying the books and our magazine.

In our current political climate, how have the words of the writers you celebrate served as a form of solace or guidance? Can you talk a bit about how The Second Shelf and its mission has impacted the praxis of your politics or your creative goals as a writer?

I suppose that all of this existing is the praxis of my politics! I started working on The Second Shelf before #MeToo and before Trump was elected. The idea for the business came to me not long after I’d visited a book fair in 2015 in New York and noticed the gender inequality in the room, and also from working at a freelance space in the office of A Public Space while they were putting out an issue on forgotten and overlooked women writers. It was several convergences that led me to the dream of this business.

Trump, #MeToo, and all of these other crises that have come to pass, as well as the daily inequalities women face in their lives, aren’t really new crises—they are simply ongoing reasons for feminists to focus on what we can do to redress these inequalities and abuses. It’s a good and exciting challenge to be selling books by women; it’s positive and it’s work we go about with open and enthusiastic hearts. It is what I needed to do to deal with all that has been happening in culture in the last few years. The more I’m in the rare book world, the more I learn of women who have come before me, working to forge a space for women’s voices.

Read this Next: Creating Home

by Sarah Heying
The queer community in North Mississippi is a secret society.