“Selena: The Series” Is a Disservice to the Iconic Singer’s Legacy | Bitch Media

One-Sided Truth“Selena: The Series” Was Always Set up to Fail 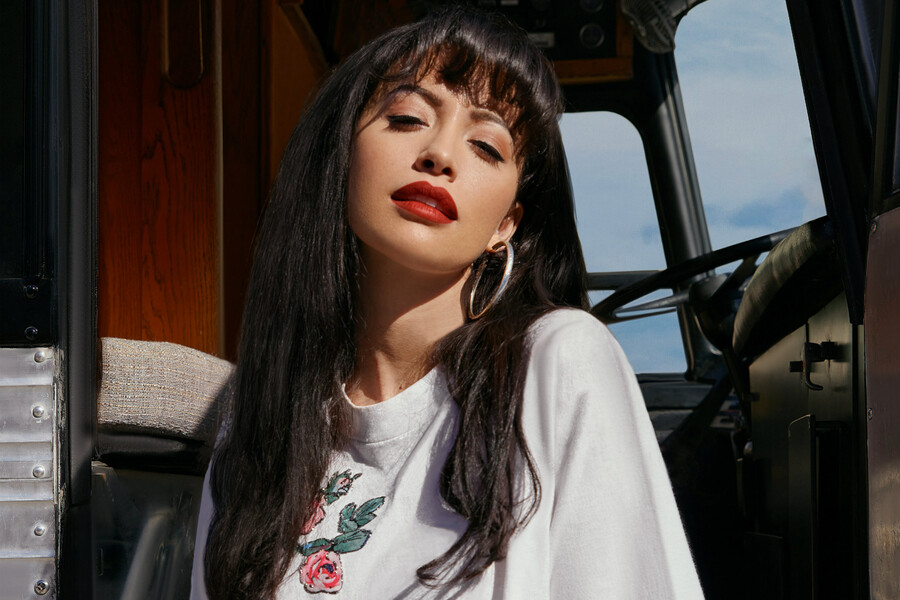 “Muy excited” is undoubtedly how countless fans felt when Netflix announced Selena: The Series, its two-part television tribute to Selena Quintanilla-Pérez, the legendary Mexican American musician crowned La Reina de Tejano who was murdered at the age of 23, just as she’d begun climbing the mountain toward the apex of her career. As a lifelong Selena zealot and someone who has watched the 1997 film Selena too many times to count, especially as a nenita coming into my own as a Chicana, I was pragmatically hopeful about the miniseries—resolved to accept something comforting and satisfactory, like the original biopic, but fully ready for a story that might blow me away.

The press came pouring in, making grandiose promises of an upgraded story that detailed Selena’s life as nothing before it has, a blue-check-verified official history, and a rare opportunity that would reveal who “Selena was and what she stood for.” All of this anticipation came to its head on December 4, when the Hiromi Kamata-directed drama premiered on Netflix. After 25 years, the possibilities felt limitless for a dedicated television series. Though Selena’s life was cut short and much time has passed, her dedicated fanbase has sustained a decades-long hungering for more Selena, which has culminated in several MAC Cosmetics collections, commemorative records, and even a star on the Hollywood Walk of Fame. What better way to tell a deeper version of her story than to offer a two-part television series on a major streaming service? Selena: The Series was an opportunity to illuminate all that couldn’t be squeezed into the beloved 128-minute film. What don’t we know about her life that this miniseries could reveal? After nine episodes, my hope has decidedly shriveled. Se marchito.

Selena: The Series opens with the sound of her beloved fans cheering. A smiling Selena (The Walking Dead’s Christian Serratos) waves to them from behind her tour bus window, etching SELENA WAS HERE with a fingertip through the dew. The year is 1994, Selena y Los Dinos are in Chicago, and Selena’s sister, Suzette (played by series standout Noemi Gonzales), comes into the room on cue, white bedazzled bustier in hand, just as Selena turns, blinking, teary-eyed, and seemingly unable to muster words. “I can’t do this,” Selena eventually says. “Yes,” replies Suzette. “You are.” “You’re just scared,” her brother A.B. (East Los High’s Gabriel Chavarria) says. Then the pair join in a pep talk that highlights their unwavering support for Selena and their shared strides toward the ever-dreamed-of English language album. The older siblings coax their sister back into something closer to calm. It works, and after the siblings offer a few more words of reassurance, Selena twists back to the fans and begins smiling and waving again.

It’s a brief and peculiar scene, especially for those being introduced to Selena for the first time, but it effectively sets the stage for what’s to come: involved family dynamics, surface-level insights into their intimate bonds, and a series that would be more aptly titled Los Quintanillas. While there are plenty of beautiful depictions of the band’s music-making process that will strum the heartstrings of musicians and fanatics alike and plenty of other wholesome moments, the series ultimately bites off more than it can chew, dangling morsels of storylines in hopes that they’ll pass as a satisfying meal. A.B.’s struggle to succeed as a songwriter and producer begin to overshadow every other story arc. Suzette’s journey allows viewers to watch as she blossoms, both in her relationship to drumming and later, in her relationship with her now-husband Bill Arriaga (played by Christian Escobar, who gives off mad Latinx Ken doll vibes.)

A.B., Suzette, and Selena’s father, Abraham Quintanilla Jr. (Ricardo Chavira), continues to push them into the destiny he’s deemed for them—the spotlight—while fighting record label execs to ensure utmost creative control over his expanding family empire. Given the number of storylines, each becomes more difficult to follow as the series continues. Selena appears to be “finding herself,” but the brief airtime she’s allotted onscreen is reserved for cutesy performance montages with sometimes-wonky lip-syncing, infantilized love scenes marred by longing, and ever-changing hair and rad outfits (Symbols of independence and sense of self? Externalizations of the internal struggles we are not privy to? We’re left unsure). Marcella Quintanilla (Seidy López who played Selena’s mall-going friend in the film) isn’t even referred to by name until three episodes in, despite being onscreen throughout. We don’t learn much else beyond Marcella’s unwavering love for family, sadly sans tender hair-stroking conversations with Selena or speaking out against Abraham’s overreaching control.

Guitarist Chris Pérez (Jesse Posey), Selena’s boyfriend-turned-husband-turned-widower, lacks both the dynamism and charm he was granted in the film and seems to have been replaced with a shell of a person, at no real fault of Posey (and resulting in a surprise to the real-life Pérez). At the heart of the series are themes that begin to feel cliché to the Millennial or Gen Z Chicanx: the importance of hard work, honesty, perseverance, and equal doses of cultural pride for your Mexican and “American” sides. These concepts, as depicted in the Selena film, felt radical in the ’90s but feel more superficial now without any attempt to dig deeper. There are wimpy attempts at talking about tough issues throughout the series, from Selena being ogled and being labeled “worldly” or “exotic” during a photoshoot for her 1989 self-titled album to an attempt to connect the Quintanilla family’s world to the rest of the world through news clips, but the series doesn’t take much of a stance and these moments, like the character development, ultimately fall flat. But despite these glaring shortcomings, this series seems to be exactly what it set out to be.

Perhaps Selena: The Series will serve as a warning that having more creative control doesn’t always mean creating better products.

“We were always on the same page,” Selena: The Series creator Moisés Zamora told Deadline about working with the Quintanilla family. “I wanted a wholesome, inspirational story. It was going to be the family, Selena coming of age, and achieving the [American] dream. That is the tone and the vision of the show.” After all, the series was originally created with Disney in mind as the distributor. Viewers are certainly given new-to-us portrayals and space to process the family’s working-class origins, which lends itself to the show’s vision of depicting the American Dream. We see the family of five sleeping in one room at their Uncle Hector’s house, traveling together on a hollowed-out tour without air conditioning or heat, and the family’s resourceful father and son dumpster diving to smartly repurpose peach cans for party lighting. The show has a generally encouraging, normalized DIY ethos (which is a bit ironic given the family’s habit of wielding copyright against fans for using Selena’s likeness without explicit approval).

However, the American Dream is a flimsy standalone narrative because like the series it only tells one version of the truth. Truth alone (or a version of it) can’t stand in for compelling storytelling—and if you’re pitching something as the truest story told yet, then you have to make us believe it. It’s not that it isn’t possible for an icon like Selena to have been a genuinely wholesome and humble woman, but there’s no such thing as a one-dimensional person. “Everybody has a B-side,” as the series spells out through a veracious metaphor. Who was Selena when the cameras weren’t rolling? What did it really feel like to be a kid whose life centered around the pursuit of stardom? How did she feel about having to experience high school through the mail? And perhaps, most importantly, what is the show’s takeaway? It seems we don’t know anymore about who the Quintanilla children are when their parents or the world weren’t watching their every move. The family’s longstanding fight for greater control, creative and otherwise, over Selena’s legacy, especially after her death, is a well-documented tenant of their approach to stardom—and this idea plays a central role in the series.

“Avoid contracts that say ‘in perpetuity’ at all costs,” Abraham harks at the dinner table in one episode. And yet he may not have extended the same wisdom to Pérez, who was on the receiving end of an estate contract within weeks of his wife’s untimely death—a document in which Pérez forever signed away rights to Selena’s music, image, and more in exchange for a 25 percent share of net profits. That contract was recently used to bar Pérez from adapting his 2012 book, To Selena, with Love, into a TV series. (Abraham’s lawsuit against Pérez was settled in 2019.) Perhaps Selena: The Series will serve as a warning that having more creative control doesn’t always mean creating better products, and that this side of the story has already been told to its limits. When only one side of the story is given the greenlight, the other sides risk being forgotten. And while that might be a choice the Quintanilla family is making in concert with their legal estate rights, it is ultimately a disservice to Selena and to her fans, who want to better understand the late singer’s humanity beyond a calculated public image.

Read this Next: Selena Forever