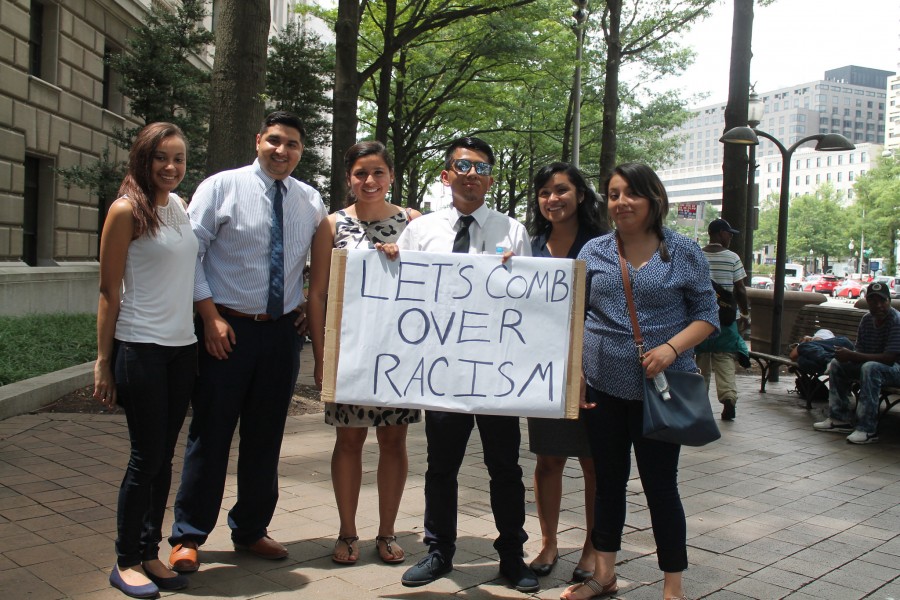 A Donald Trump protest in Washington, DC over the summer. Photo by Elvert Barnes (Creative Commons).

Donald Trump has been playing target practice on all my identities.  As a Muslim, as a woman, as a feminist, as an Iranian-American, and as a comedian, I am the butt of his jokes. Listening day after day to his slut-shaming and his threats against Iran, then to pundits’ notions that he’s just a funny, “tough-talking” candidate, I’m starting to feel like Jack Nicholson in One Flew Over the Cuckoo’s Nest: I’m either going to wind up strangling the nurse or getting the lobotomy. Eric Liu, a civic educator and founder of Citizen University, refers to this helpless feeling as “creeping fatalism.” I’ve got to find ways to keep myself from that pit of despair.

So how do I trump the Trump fatigue?  As a writer and a comedian, I feel trapped.  Writing about him gives him more attention. Joking about him fuels the naive idea that he’s nothing more than a one-dimensional source of outlandish click-bait entertainment.  The truth is, he is far more dangerous than that, and he’s not going away anytime soon. So, how do we take care of ourselves and stay energized in the meantime?

Here are five tips to maintain sanity in the face of Trump-induced despair. Even more importantly, these tips aim to resist creeping fatalism and fight growing apathy.

1. First Off, Acknowledge That You Are Fucking Pissed Off.

Carl Jung once observed that apathy is a defense mechanism to anger.  Anger is a memorable and often traumatic emotional experience.  When we can’t see a way to solve what is making us angry, a maladaptive coping strategy can sometimes be to internalize that anger.  While that’s a savvy short-term solution, we’ve got eleven months ahead of us before the elections, and we need to find other ways of getting that rage out!  So, I went to Target and bought myself something I haven’t played with since I was ten: a catcher’s mitt and a softball.  My husband and I go out into the street at night and toss the ball for a few rounds.  Sometimes, we throw in a few expletives to go along with our fastballs.

Once you’ve acknowledged that you’re fucking pissed off, check out one of my favorite TED talks of all time, Kelly McGonigal’s guide to transforming cortisol (the heart disease hormone) into oxytocin (the cuddle hormone).  McGonigal’s research team discovered that it’s not that stress is bad for you, it’s the belief that stress is bad for you that is the real killer.  So the next time (and there will be a next time) Trump is waving his arms at an audience of white supremacists, saying that he’s going to “take the country back,” try McGonigal’s tactic.  She says, “That pounding heart is preparing you for action. If you're breathing faster, it's no problem. It's getting more oxygen to your brain.”  In other words, you can equate your physical reactions to stress with a positive, almost athletic response to a challenge.  Confidence builds on confidence, optimism builds on optimism, and that, my friends, is some good math.

You may be wondering how Trump wanting to bar all Muslims from entering the country and Ted Cruz suggesting we “carpet bomb where ISIS is”—and by proxy, the Middle East—could possibly transform into a sense of optimism.  Well, it takes a leap of faith.  Though, having some science to support the claim helps. Amy Cuddy’s research on body language reveals that we can change other people’s perceptions—and even our own body chemistry—simply by changing body positions. Walking around standing tall, as a Muslim, or as a minority member surrounded by bigots, isn’t always the greatest idea.  It has gotten people killed.  That can be and has repeatedly been a danger for so many Muslims surviving the GOP’s attack on America’s Muslim citizens today.  But, studies show that it doesn’t take much!  Just two minutes with your arms up and an upward gaze can dramatically change your sense of agency.  If there’s one thing that we can learn from Trump, it’s that the facts mean less than how they are interpreted.  I like taking at least two minutes in my day for some of that Trump privilege: to walk around feeling like everything I say is meaningful, important, and relevant and that people want to hear me speak.  Delusion works for him, why can’t it work for you?  Allow your body to feel safe and optimistic for at least two minutes a day, regardless of the headlines.

4. Remember That Even Harry Potter Needed Chocolate.
In book three, when 13-year-old Harry Potter is fighting off soul-sucking Dementors, a werewolf, who we later discover is a teacher, tells him to eat chocolate right away.  Whether it’s with chocolate or some other endorphin-inducing sweetness, give yourself a moment to acknowledge your body and its need to feel special, especially when presidential candidates are telling you that you’re not.  Let your body know, “Uh oh! Dementor alert!  Try some chocolate, cause a werewolf gave it to me.”

5. Change Your Media Sources!
CNN is Diet Fox News.  The LA Times, Washington Post, Wall Street Journal, and New York Times have been disappointing, to say the least, in their frivolous wielding of the word “Muslim” and all its infamous shock value.  While we are in an era where mainstream media is being co-opted by right wing and, dare I say, corrupt parties, we are also in a time where the individual consumer on the Internet holds a great deal of agency.  Find the journalists that write the stories you want people to read and subscribe to their work.  Let their editors know.  Tweet them love emoticons or pictures of puppies and kittens if you don’t always know how to articulate your appreciation.  Even more importantly, find media outlets that let you know what change is happening.  #BlackLivesMatter has made progress.  The GOP’s wild and constant screaming and ranting is proof enough.

By my math, the more unhappy Donald Trump is, the better off the world is.  We can do this!

We can keep him and the Freddy Krueger-like GOP from sinking in their finger-claws by keeping ourselves from falling prey to the numb and specious slumber of apathy.  If you don’t believe it’s possible, fake it for a few minutes a day to recharge.  In a day and age where we can watch Wolf Blitzer give presidential candidates free reign to make up facts on a major news network, then why can’t you and I just assume everything is awesome and pump ourselves full of oxytocin for a momentary recharge on our way to sharing our truth? 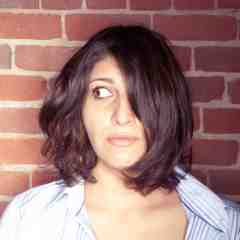 Zahra Noorbakhsh is a Feminist Muslim, Iranian-American comedian. She is co-host of the #GoodMuslimBadMuslim podcast and tours her one woman shows, "All Atheists Are Muslim" and "Hijab & Hammerpants" nationwide. For bookings or more info, visit ZahraComedy.com. 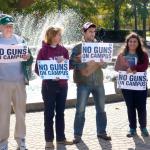 by Saina Behnejad
Just say no to using women’s bodies to sell legislation that supports violence.