The Self as Specimen | Bitch Media 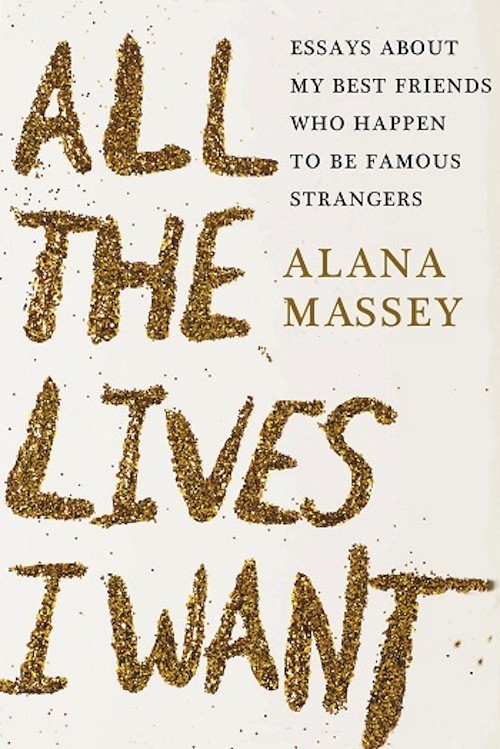 Alana Massey’s new book, All the Lives I Want: Essays About My Best Friends Who Happen to be Famous Strangers, is a compelling exploration of fame and femininity. Massey, who writes about the body, relationships, and culture, has become well-known for her sharp writing in places like The Guardian and Pacific Standard. Her debut is a smart, well-curated look at the reality of celebrity womanhood and the burdens we create when we expect so much of our idols. We identify with celebrities not just because we want to be them—to have their notoriety and their cash—but because they are canvases, Massey says. We admire not just what they symbolize, but that they can be symbols at all, that they have the capacity to become something more than what they actually are, and that they can stand for whatever we want them to symbolize.

At its core, Massey’s book is a study of female identity, of what it means to exist in a world that detests women and their feelings while simultaneously obsessing over and monitoring them. The people she writes about are not just famous women, but famous women we’ve turned into martyrs: Courtney Love, for being Kurt Cobain’s true love and yet not succumbing to death alongside him; Anna Nicole Smith, for daring to manipulate the systems of fame and fortune to work in her favor; Lisa “Left Eye” Lopes, for being the ultimate house-burning “crazy ex”; Lana del Rey, for having the gall to create an intoxicating, tortured persona for herself, one that supposedly counteracts her “real” identity as the relatively privileged Lizzy Grant.

The collection begins with “Being Winona, Freeing Gwenyth: On the Limitations of Our Celebrity ‘Type,’” originally published by Buzzfeed. In the essay, Massey argues that our celebrity allegiances, whether we worship at the altar of the eccentric girl (the Winona Ryders) or the pristine one (the Gwyneth Paltrows), fail to acknowledge the humanity in both sides. By focusing solely on Winona’s public identity as the “long-suffering girl,” and by aligning herself with it, she was keeping Winona from being her own person with her own feelings and issues. And “giving Winona back her full humanity meant giving it back to Gwyneth, too,” she writes.

Another potent example of robbing celebrities of their agency comes in the essay “There Can Only Be One: On Lil’ Kim, Nicki Minaj, and the Art of Manufactured Beef.” While the feud between Lil’ Kim and Nicki Minaj is legitimate, the “white-dominated mainstream media” has fanned the flames for years, perpetuating the idea that there can only be one powerful woman in any given field. This idea is even more common when Black women are involved, Massey says. The rivalry between Lil’ Kim and Nicki Minaj becomes a method of distraction, of keeping the women from focusing on their work. It’s an attempt to keep multiple Black women from being acknowledged as legitimate masters of their crafts.

In the book’s strongest essay, “All the Lives I Want: Recovering Sylvia,” Massey analyzes Sylvia Plath’s work and her cultural image—that of another martyr, she of self-flagellation and -destruction, of unmoored and girlish confession. Massey argues that to be a young woman and to write of the self is an act of defiance and of proving not just our own realities, but the realities of the women around us, too. Those young women who love Plath are derided for doing so, for worshipping the queen of oversharing. “The reputation of young girls for ‘wearing their hearts on their sleeves’ is one that is discussed more often as unwittingly sharing too much information, rather than framing them as active agents making decisions on how best to publicly express themselves,” she writes.

Massey also writes about herself with admirable openness, so it’s impossible not to read that Plath essay as a meta-commentary, too. She writes of her eating disorder in the present tense, not the past. She tells us about the $900 bill for her antipsychotic medication that led her back to stripping after she’d decided she was finished. But I refuse to call this book any of those adjectives we ascribe to personal nonfiction written by women: “brave,” “honest, “fearless.” When we do so, we’re the same as the celebrity worshipper denying their beloved of their humanity. To proclaim this kind of work “fearless” implies that there is something to be ashamed of in opening up the self and showing how it reflects the world around it. Massey is brave for speaking candidly about her own life, sure, in that it takes a certain kind of self-assuredness to bare truths most people would consider private. But to claim this as the book’s defining characteristic is to reject the fact that it requires more than bravery to take material from the self and turn it into art. It takes fucking work. To write about the self is not to cut a vein and watch it bleed dry. It’s to take one’s own blood, hold it up to the light, and see that it’s the same blood that’s within all of us.

The world breaks girls of all stripes, Massey says, from “broken-bodied girls” in horror films, to the celebrity women we see as godly. To make art out of our own lives anyway is to give us, to give all these women, chances to break ourselves. It is to take back our agency and demand that we mean what we want to mean. It is to say there’s room for all of us.