Sex, Lies, and VideotapeAn Interview with The Center of the World's Molly Parker

Reviewers have likened it to a dot-com Pretty Woman, but The Center of the World, the latest film from director Wayne Wang (Smoke, Blue in the Face, The Joy Luck Club), is a far more complex rumination on the intersections of sex, love, and commerce. Set in southern California, the story follows Florence (Kissed's Molly Parker), a rock 'n'roll drummer who earns a living offering up lap dances in a strip club, and Richard (Boys Don't Cry villain Peter Sarsgaard), the lonely, freshly minted computer millionaire who pays Florence $10,000 to spend a weekend with him in Las Vegas. The script boasts a number of different writers (including authors Paul Auster and Siri Hustvedt and underground filmmaker/performer Miranda July), and Wang encouraged his leads to collaborate with him on creating an intimate, searching portrayal of two people struggling with the limits of their self-created lives. Journalist Laurel Rosen was a research consultant on the film, finding real-life strippers and dot-com millionaires who were willing to help the actors in developing believable characters, and got a chance to talk with Parker about her role in the film.

How did you train for this role?

I worked with a dancer in Los Angeles at Cheetahs; she taught me some of the moves. I wanted to learn the dance stuff, but I also wanted to check out what her reality is. We talked a lot and she danced for me. It was in the afternoon and the club was empty. The whole place just had that feeling  you know, when you go into a bar in the daytime, it smells horrible, and it seems so much nastier than at night. There was sunlight streaming in the doors, and it was really dark inside and carpeted. She was really great, incredibly open. Right away she took me into the dressing room, and was like, "This is where we get changed and we all hang out back here together," and she just ripped her clothes off. She was so not self-conscious about that, or like, "Check me out, I'm gorgeous."

Any particular moves you do in the movie that you learned from her?

Some of the lap dancing. [You] never actually see Florence stripping in the movie. She sat me down and gave me a lap dance and told me what she was doing when she was doing it. It's all about the tease. It's about making the customer like they're different from all the other guys who come into the club. [They] buy from the strip club the fantasy that you might be the one that they leave with. And that fantasy is totally perpetuated by the dancers. And this dancer is getting paid to teach me to do this stuff, so I too am one of those people who's buying something from her. Everyone's engaged in the transaction  there's an understanding that there's business, but once the business is done everyone engages in the fantasy.

You have to be incredibly physically strong to be able to do any of that stuff on the pole. You know how they lift themselves up on the pole and twirl down and do all those things? I couldn't even begin to do that. Your back needs to be so strong. These women spend hours at the gym every day. There's a lot of preparation that goes into doing what they do. They're really physically fit, they have their hair done and pedicures and manicures and waxing, tanning, all kinds of stuff. 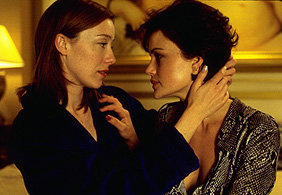 The research gave me a whole lot of information, and then gave me the security to say: There are thousands of women who do this, and they're all different, and they're all doing it for different reasons. Both as an actor and as a woman, I'm not interested in playing the character in the movie as any kind of a cliché. I didn't want to hook into the really obvious thing that we all assume about strippers and sex workers  that they've all been abused, that they're victims. I really wasn't interested in doing that, although that is the reality for a lot of women. But mostly  and this often happens to me [when I'm] doing research for films  it gave me enough information to be able to stand back and go: I can play this any way I see fit. Because at the end of the day, the character I play should be a complex person who has all kinds of reasons for doing what she does.

Is there anything that you hoped to learn from the dancers but didn't? Or hoped to find out in your research process but didn't?

I found that many of the women I met talked about their work as being empowering, and something they enjoyed. But I felt like it was a bit of a thing they were saying to me, or that they had been telling themselves. No matter what you're doing in your life you have to justify it to yourself  that it's important, that it has value. Especially when it's something that's judged so harshly from society's standpoint. These women feel the need to defend their choices. Especially in view of me and a filmmaker and a journalist coming and sitting down and asking them questions about who they are and what they're doing, and what happened to them, and how do they do it, and [other] intimate questions.

So I felt that I [got this line] immediately from the women, like "I do this because I want to do this, nobody's making me do it. I feel really empowered by doing it, it makes me feel good about myself, I'm in control." And then later, as the conversation [went] on, I would start to not really believe them as much. The first girl I met just looked so vulnerable and sad. And she talked about how she was a good wife, basically  she would go home and fuck her boyfriend and make dinner for him and all that. She said that she was going to go on one of those Ricki Lake-type shows and ask her mother for forgiveness. That just gave me the chills. I think it's a complicated reality. But I found all of these women incredibly open and really generous. And smart.

Do you feel the movie accurately portrayed the complexity of that world, or of that character?

In the film, you never really see my character. You see her briefly in her own world  putting up fliers, playing the drums  but mostly you see her with this guy, who she's trying very hard not to give any of her real self to. Which was the choice I made, and the choice Wayne made in what he chose to use in the film. When Florence comes into the hotel room to dance for Richard, she changes the lights, she puts on the music, she tries to create the situation. She walks in thinking she'll be able to control this whole situation and it's going to go the way she wants it to. And then it doesn't, because it's just her and this man in this room for three days. He's not an ogre. He's charming and sweet and young and good looking. And it complicates the whole situation for her, and her defenses start to fall apart. 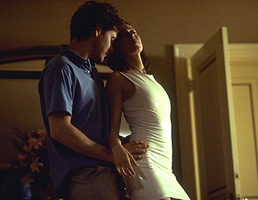 Was the fact-based process that went into developing this character different than ways you've entered into other roles?

One of the things I really loved about doing this movie was the process of rehearsal and learning. I loved that Wayne thought it was important to make sure we were at least attempting to represent Florence  and in a bigger sense, all women who are sex workers  in a way that's realistic and truthful. Often we would come up against something that we didn't know or understand, and he would get on the phone and ask somebody about it, or we would go somewhere and talk to people. I loved his openness and his willingness.

Bad directors will tell you they absolutely know how to do it, and how it has to happen; there's this insecurity that leads them to feeling like they have to control everything. But Wayne was so wonderful. He really let us create our own characters from information that he helped compile.

Any specific times when Wayne really let you take the reins or collaborate with him to change the script in the interest of greater reality?

Absolutely every day. We were constantly in dialogue about how to make the [film] as real as possible. Every morning, he and Peter and I would sit down and go through what we had planned to shoot that day and go, "What's working? What's not working? Considering what we shot yesterday, how does that change what's going to happen today? Does anyone even understand what we're doing in this scene? Let's change that and talk to people." That was the process of making the whole film. It was the most fun I've ever had because it felt like such a collaboration between the three of us. Peter and I were given the responsibility to create those characters. It was like, "Here, actor, here's the information that we can give you. You come up with the character, combined with what was written by Paul Auster and Siri Hustvedt." And the scenes, based on a fairly loose structure of the story they had, evolved out of there. It really was so exciting. Not because of the subject matter so much but because of the way [we worked].

How do you think the film fits into the entertainment trend of blurring the lines between fact and fiction?

The film was shot on digital video, and [what] informed Wayne's decision to make the movie on video [is that] he could do it really quickly and have a lot of control. At this point, our response to watching video is that we know it from home movies, we know it from porno, and we know it from the news. All three of those things are very intimate representations of reality. We're used to watching them and thinking that this is something real that's happening, or it's something titillating. So in watching this film, there's something about the way it looks that makes you feel immediately voyeuristic.

Look for The Center of the World in an arty-type theater near you.

Laurel Rosen is a freelance writer and researcher in San Francisco. She has written for Salon, Bust, and Mother Jones, and is the author of San Francisco's 49-Mile Scenic Drive: The Guidebook, published by Sasquatch Books.