Sex, Struggle, and Mac-n-Cheese: Sex Stains Reminds Us Why We Love Punk 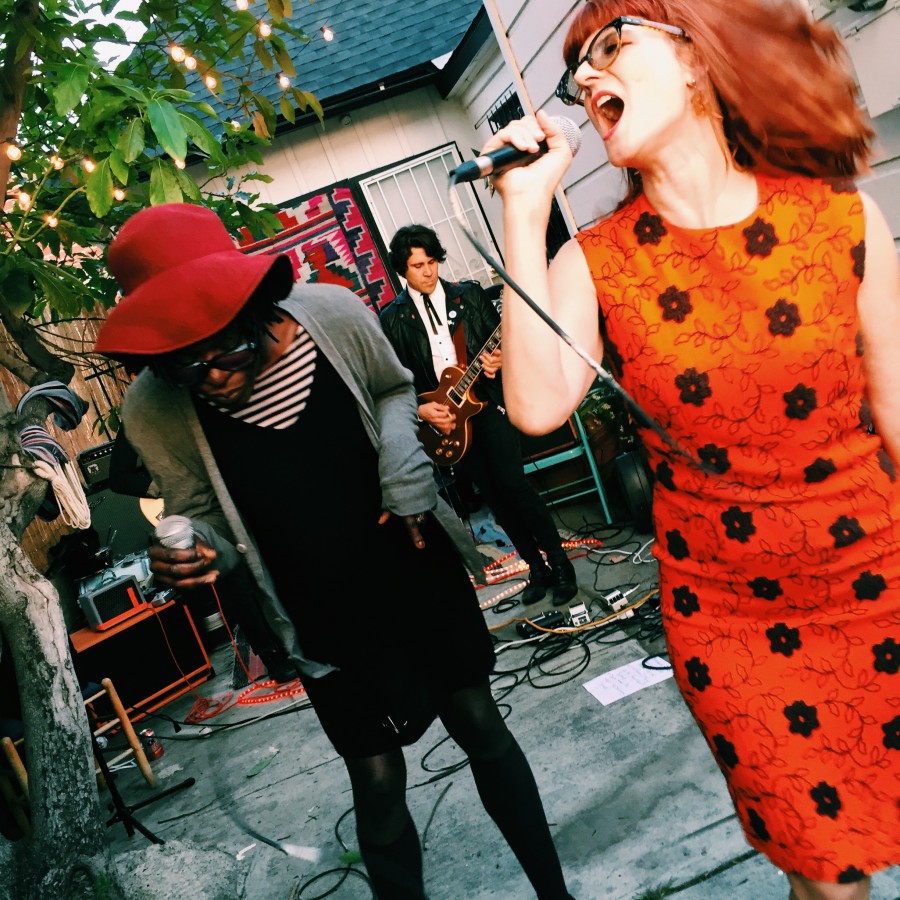 “We were the weird poor family with scabies and a gay mom,” sings Allison Wolfe on the song “Countdown To…” “I made mac-n-cheese by myself and put the cheese pack in before draining/ They just laughed and said, ‘Too bad, kid, that’s your dinner.’/ Music saved me.”

These intimate and relatable lyrics set a dedicated contrarian tone for the debut album from Sex Stains, which is due out September 2. On the self-titled album, Wolfe—who is best known as lead singer of classic riot grrrl band Bratmobile—paints of picture of her childhood all the way up to dating an “older, controlling jock dude” in high school. Her fast-paced, authoritative voice lets us know what we can expect ahead: the punk rock, DIY ethos of class struggle, outsider woes, and,most importantly, not taking any of it lying down. The band’s 12-track album has a merciless energy.

Sex Stains formed in 2014 with a hot mess of talented musicians. Wolfe met vocalist and dancer Mecca Vazie Andrews (who’s worked on choreography with Daft Punk and Toro y Moi) five years ago when they were both singing at a show in Los Angeles. “Mecca was by far the best performer,” Wolfe told me in a recent interview. “I was really attracted to her and what she was doing.” The two recruited drummer David Orlando (of Warpaint), guitar and synth wizard Sharif Dumani (of R&B master Cody ChesnuTT’s band), and bass guitarist Pachy Garcia (the vocalist and drummer of Prettiest Eyes).

“We’re coming from so many different cultures, different perspectives about Los Angeles and about the world,” said Andrews. “[Which results in the band] having a very distinct cross-section of our approaches towards the injustices that we see or experience.”

Orlando is from Rome, Garcia is from Puerto Rico, Andrews is a first-generation American with Trinidadian parents, Dumani is a fixture of the Los Angeles music scene, and Wolfe has her Olympia riot grrrl background. The socially conscious element comes from everyone in the band, Andrews said, and their collaboration is “really interesting and beautiful.”

The band is female fronted, and the women bring a jittery but genuine element to the music. The two trade witty banter back and forth, often challenging male entitlement and exasperating past encounters. The lyrics are self-conscious but still strong.

“Why do boys always gotta tell us what is/ What I want is you to listen up and shut it,” they whip out on “Who Song Love Song.” On the aptly named song “Period. Period.,” the duo cut each other off, mocking the all-too-familiar experience of competing for representation in a male-dominated space. Andrews whips out nonsensical non sequiturs, interrupting Wolfe every other word. Wolfe powers through: “Could you please leave me alone now?/ I didn’t sign up for this shit/ Wow!” She doesn’t mince words: The message is clear. “The need for male attention sucks/ And no one here really gives a fuck/ So why must I spell it out for you?”

“It’s not that I’m still angry, it’s just that I like to tell stories,” Wolfe said. “It’s important to be honest about your experiences.”

Andrews agreed on using music to reflect. “It’s a process of feelings: Anytime you share it, it gets easier. It’s the best therapy for sure,” she laughed.

Andrews and Wolfe said the beauty of punk music is it transcends barriers—whether they’re class, race, or age. “They’re not just audience members; [punk] blends audience and performer,” Wolfe explains lovingly. “That’s really what punk is. It’s super DIY and way more accessible for anyone who has been marginalized. There’s more opportunity there.”

You can preorder the album here and find their tour dates here.