What Four Sex-Themed Resorts Taught Me About Consent | Bitch Media 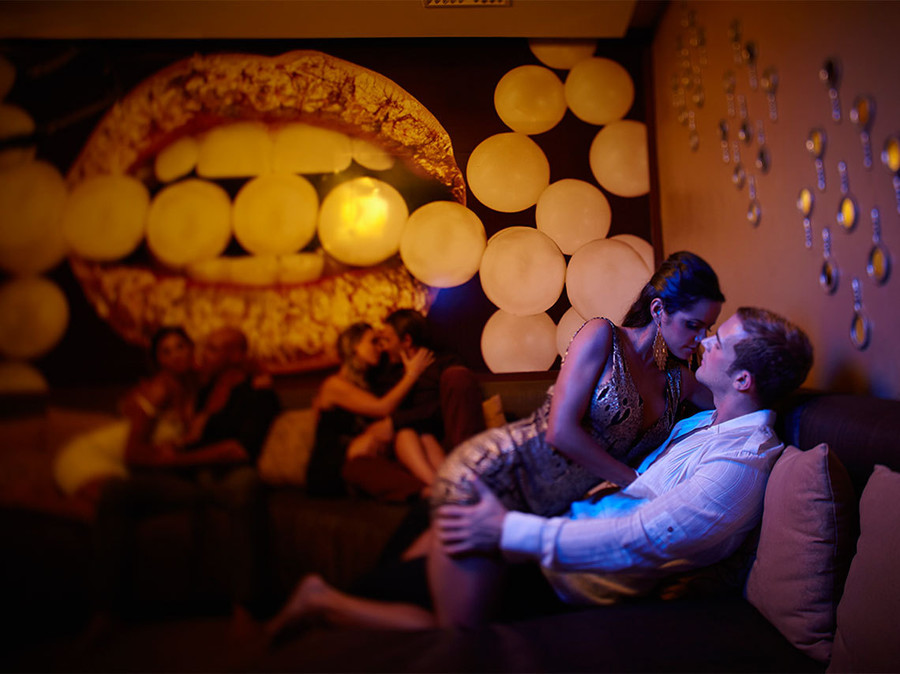 “Want to get towels?”

My boyfriend is surprised by my timidity. After all, he jokes that, at home, everyone in the building across from us knows what I look like naked. But my comfort stripping down in the privacy of our apartment reflects that it’s the only place I feel safe naked, or even scantily clad. It’s hard to get that comfortable elsewhere: As the recent outpouring of stories about both intentional sexual harassment and rote, everyday encroachment has made clearer than ever, women’s bodies are treated as public property to be judged and rated, to be commented and acted upon.

So I felt a mixture of excitement and skepticism when a PR rep invited me to three clothing-optional, sex-themed resorts in Mexico—the couples-only Desire Pearl and Desire Riviera Maya (both located in Riviera Maya), where public sex abounds; and the less risqué, top-optional Temptation in Cancun. It sounded so freeing, the idea that I could wear as much or little as I wanted without anyone invading my personal space, to be as sexual as I wanted without others reading it as an invitation.

But I was skeptical that this would actually happen, with good reason: I made my first experimental foray into clothing-optional resorts last April, at Jamaica’s Hedonism II. I had hoped to shed my self-consciousness along with my clothes, but what I got instead was hyper-consciousness. Whether they were groping me in the hot tub or catcalling me at the nude beach, guests and staff alike were aware of my appearance—which meant I was, too. The objectification of women permeates almost every aspect of our culture—how could these resorts possibly block out such a pervasive force?

Understandably, I arrived at Desire Pearl with my guard up. I wasn’t looking to be sexualized again, but rather the opposite: to be myself, boobs and butt and all, without anyone (other than maybe my boyfriend) sexualizing me. To me, that’s liberation: control over how my body is viewed. Because Desire and Temptation have a reputation for being tamer and more respectful than the aptly-named Hedonism, I had high hopes for a corrective experience.

That first day, I gradually began feeling safe enough to drop my clothing and my reservations. When my boyfriend and I entered the hot tub, nobody mentioned my body (or my pubic hair, as many had at Hedonism). People made conversation the same way they would if we were clothed, and though I got nervous when a staff member approached me by the pool, he complimented my shoulder tattoo without mentioning anything south of it.

By the second day, my whole posture had changed. I relaxed enough to stop crossing my arms and hunching my shoulders protectively. I was smiling more and looking into people’s eyes when we talked, no longer afraid they would take it the wrong way. I was even getting my own towels—and making conversation with the guys handing them out. If all women could go about the world this way, I thought, we’d have so many more opportunities to form meaningful relationships.

But as free and liberated as I felt, I was also acutely aware of the structure that allowed for my experience. Mario Cruz, concept manager for the resorts’ parent company, Original Group, explained to me that Desire creates a safe space largely by keeping its resorts couples-only: For most of the year, only straight couples are allowed at the resorts. There are a few months when two women can attend together, and no occasions when two men can. This seemed problematic for a number of reasons, but one question in particular nagged me: Would people respect my boundaries if I weren’t accompanied by a man?

“I just have to do something, if you don’t mind,” he said, looking only into my boyfriend’s eyes. He reached down and touched my pubic hair without so much as a glance at my face.

Our day at Desire Riviera Maya gave me further reason to wonder. The resort was home to a slightly more lively crowd than Desire Pearl, and as we stood at the side of the pool during a foam party, a man climbed out and approached us. “I just have to do something, if you don’t mind,” he said, looking only into my boyfriend’s eyes. He reached down and touched my pubic hair without so much as a glance at my face. I was aghast. It occurred to me that perhaps there was less harassment at Desire than Hedonism for the same reason women often feel compelled to say “I have a boyfriend” when fielding unwanted advances: People left me alone because I was considered my boyfriend’s property. They weren’t honoring my right to decide when and how I was touched; they were honoring my boyfriend’s right to decide that.

I didn’t expect much better from our next stop, Temptation. Before even entering the resort lobby, I felt singled out by the top-optional gimmick, which for obvious reasons only applies to women. In keeping with this theme, guests organize a boat ride called the “Boobs Cruise,” where—you guessed it—the women are expected to ride topless. On the online forum Cancun Care, where future Temptation guests trade information and resort tips, attendees tend to note three things: when they’re arriving, how many people they’re bringing, and whether they’re going on the Boobs Cruise. My body, it seemed, was an attraction used to sell this excursion.

The building’s interior decoration didn’t exactly help me forget that I was here as a body to be looked at. There was a giant painting of a woman at the bottom of the “sexy pool” (the main pool where guests gather topless, drink, and catch live music), and behind the beds in every room were paintings of scantily clad, thin-yet-curvaceous, dancing women. I’d noticed this at both Desire resorts as well: The walls were full of photos, paintings, and sculptures of naked ladies. There were no male figures to be seen, as though the resorts couldn’t even be bothered to deny that they catered to heterosexual men.

This focus on women’s bodies—particularly breasts—seemed to affect people’s behavior at Temptation. At one point, I had to push away a woman who swam up and tried to suck my nipple; elsewhere, I told a man to stop touching my boob with another woman’s foot (which was as unsettling as it sounds). And I was disappointed to notice staff members’ eyes dart downwards at my chest as I got towels. I was no longer free to choose whether my body was sexualized. I began asking my boyfriend to get the towels again.

Clothing-optional resorts are in a tough situation: By inviting people to get naked, they’re putting women in a vulnerable position. The majority of women have been sexually assaulted or harassed at some point, creating fears surrounding nudity, especially around men.

Like many spaces and events that promise sex-positive atmospheres, all four sex-themed resorts I’ve visited have overlooked the harsher expectations of and assumptions about women’s nudity, putting the emphasis instead on how it can liberate us. It may not be sexy to remind us of our vulnerabilities, but I wish these environments acknowledged why their version of liberation might be hard for us to achieve—and why we consequently might be nervous to undress for strangers.

The truth is, stripping us of our clothes doesn’t unburden us of the societal baggage dumped on our bodies. The anxiety that comes from a lifetime of learning that your body exists to please men—even if you don’t date, desire, or have sex with them—doesn’t disappear just because everyone’s naked. If anything, nudity brings this fear to the forefront, and whether that is healing or damaging depends on how people engage with it. For it to be healing, they have to treat your nudity and privacy with the utmost care and thoughtfulness.

And people don’t yet have all the tools necessary to treat the nudity of others with care and thoughtfulness. Not everyone who vacations at resorts like these fully understands—or even wants to understand—concepts like objectification or consent, so it seems important for resorts to take a proactive role in teaching them. Hedonism, Desire, and Temptation all have a “no means no” policy for sexual contact, but I didn’t know that until I asked the staff. To make the environment that’s actually liberatory for all guests, they need to explain the ground rules upfront and in writing. My dream sex resort would hold consent workshops where people learn that verbal harassment and staring can be just as violating as unwanted touching, and staff would be taught how to intervene when they see these violations. The rules would cover respecting a variety of sexual preferences, gender identities, and cultural backgrounds. And the art would include an equal number of nude men and women.

My time at Desire Pearl gave me a taste of what the world could look like if women weren’t afraid. If we felt safe to wear as much or as little as we wanted, to smile at men, to look people in the eye, to talk about anything with anyone. And that small taste made me hungry for more settings like it—because in an environment where women can stop playing gatekeeper to others’ desires, we’ll finally be free to pursue our own.