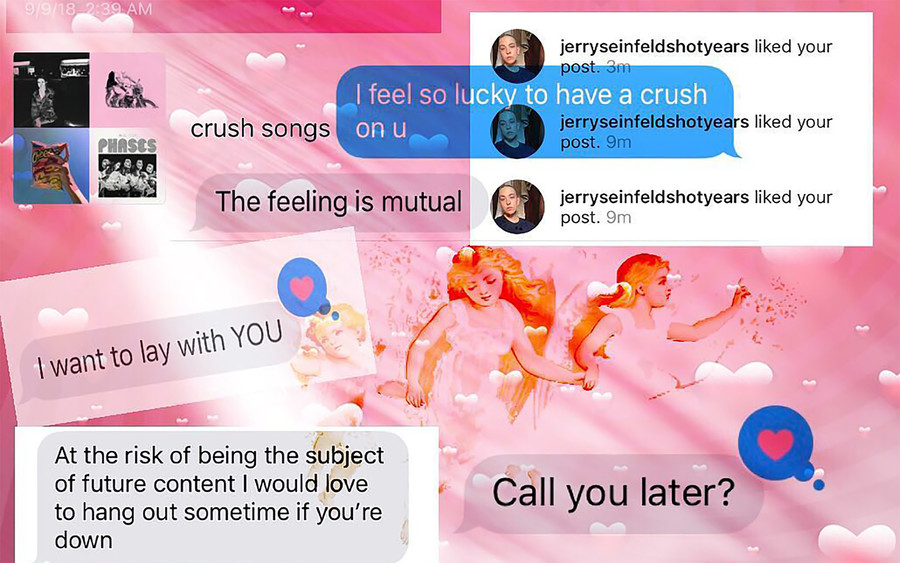 Instagram has becoming an increasingly unwelcome space for sex workers and queer people. In the wake of the passing of the controversial FOSTA-SESTA bill in April 2018, which claimed to target sex traffickers while actually having devastating impacts on sex workers, the platform has increased its censorship of content that can be perceived as related to sex work, leading to an increase of what is known as “shadowbanning”—the act of blocking a user’s content on social media sites in such a way that the user doesn’t know it’s happening until they see its impact on their account metrics—toward pages run by sex workers, queer people, and anyone whose content is deemed “unacceptable” under the very vague and large net cast.

Facebook, which owns Instagram, took new measures to ban content that can be read as “sexual solicitation” including that which “facilitates, encourages, or coordinates sexual encounters between adults.” Social-media accounts run by sex workers have been pushed off the mainstream internet, content considered queer has been censored, and sites such as Backpage have been shut down for hosting ads posted by sex workers for their services. We are living in an era of a puritanical internet promoted by a vanilla state. FOSTA-SESTA has impacted the ability of queer and sex working people to build community online and further isolates the two groups from the mainstream culture. What does it mean when a person’s lived reality is NSFSM (Not Safe For Social Media)?

I created my meme page, @atmfiend, because I had difficulty finding memes I could truly relate to as a queer sex-working person with complex PTSD. Memes have not only become an art form in their own right; they are a way for people who are broadly excluded from mainstream culture—and who even face violence in non-digital spaces—to share their experiences and offer connection and healing to those who feel similarly isolated. Through my meme page, which offered me a space to engage with other users on an account beyond my personal, I was able to gain a community on Instagram that paralleled my community in my day to day life.

I spoke with others who run meme pages that deal with sex work and queerness who feel they have been harmed by Instagram’s increased censorship. It’s worth noting that, at this time, Instagram has not once made a public statement (despite loud critiques and questions asked by marketers and users alike) confirming or denying that shadowbanning is real on their platform. The closest Instagram has come to making a concrete statement was a February 2017 post (since removed) on its Instagram for Business account: 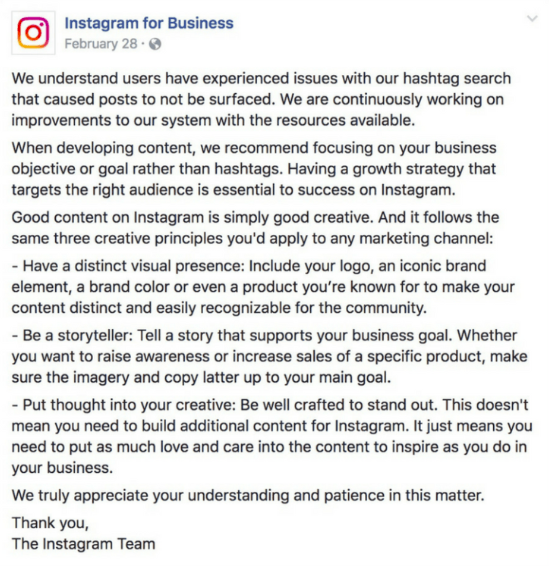 Facebook blames shadowbanning (without using the word) on a glitch in the system regarding hashtags. Despite Facebook saying shadowbanning isn’t real, many social-media managers and marketers live in fear of triggering a shadowban, spending time crafting and sharing lists of supposedly-banned hashtags that users should avoid and tips and tricks to protect their accounts. Benjamin Chacon, a writer for Later, a popular Instagram scheduler, wrote in 2017 in their guide on how to avoid Instagram’s shadowban, “Have you noticed your engagement dropping, follower count declining, or photos not showing up in hashtags? You might be a victim of the mysterious Instagram shadowban—and you wouldn’t even know it.”

Chacon continues on, writing, “Shadowbans exist to deter users from a specific kind of behavior—whether that’s being spammy, inappropriate, or even abusive. In the case of Instagram, the platform seems to mostly be targeting users who display spammy or inappropriate behavior. What’s interesting, however, is that certain ‘non-spammy’ behaviors have also been lumped-in as a way to get shadowbanned, such as using the same hashtags over and over again.” Other social media experts and bloggers, like Caroline Forsey for Hubspot, a marketing platform, and social-media marketer Alex Tooby, have covered the phenomenon. If shadowbanning isn’t real, it certainly has its hold on social media managers, the arguable experts, and, if, as Facebook stated in the aforementioned 2017 post, it’s simply a matter of hashtag usage, why is it that users who have never once used hashtags find themselves shadowbanned? Why would FOSTA-SESTA have led to an increase in this account-silencing?

Meme page owners have directly noticed that, when shadowbanned, they barely exist online. @local_._honey, an Instagram account with more than 13,000 followers, tells Bitch that some of their longtime followers have posted comments like, “Great to see you posting again,” because their content is so hidden by the platform’s algorithm. Despite their followers having sought out and interacted with their page, something that should push the account up higher in Instagram’s algorithm, therefore making it more visible, their followers say they don’t actually see the content during their scroll. The now-removed @sadfemmememes, an account with more than 26,000 followers, explained, “When I’m shadowbanned, my posts don’t show [up] on the ‘Explore’ page or under hashtags, so it’s basically impossible for any new people to find my account. Instagram even hides my posts from people who follow me.”

Users with business accounts are able to track their metrics within the platform, so many creators keep a close eye on these numbers. @womenswhork, a user with a following of more than 17,000, said that since FOSTA-SESTA, “I’m reaching about 10 percent of my followers.” These users blame their drop in reach on the “invisible” changes that Instagram made following FOSTA-SESTA. Even if a user doesn’t post anything explicitly sexual, but has an association with sex work offline, they can still be punished due to name recognition; for example, @womenswhork has “seen shadowbans on people who are porn or cam actresses, even if their account has no explicit photos.”

Instagram has not once made a public statement (despite loud critiques and questions asked by marketers and users alike) confirming or denying that shadowbanning is real on their platform.

Shadowbanning also occurs based on how often a user’s acount is reported. @sadfemmememes shared, “Somebody left me a hate comment that read, ‘Lesbians are just some hoes who don’t get enough attention or are tired of boys.’ I shared this comment to my Instagram Story to showcase some of the ridiculous homophobic messages I’m constantly receiving, not to promote it, and received a message from Instagram telling me that I had shared hate speech, and as a result I was shadowbanned for almost three weeks.”

A queer person sharing their own lived experiences of harassment being silenced is just another example of the damage of blanket censorship. Specific hashtags are also targeted; using hashtags that have been banned or are flagged as NSFW (#lesbian is flagged as NSFW, for example) can also get an account flagged. As per the aforementioned statement from Instagram, Instagram’s reasoning is that their goal is to target spambots, but this seems unlikely considering how many meme accounts don’t use hashtags at all and instead rely on community-based growth. Ultimately, shadowbanning creates an environment where it’s nearly impossible to build community on these platforms, especially for LGBTQ people and sex workers (and especially for queer sex-working people).

Since to be queer is to exist outside of the cisheteronormative approach to existence, and to be a sex worker is to be criminalized (especially in an American context), stigma is almost always to be expected, especially online. This content is uniquely valuable and its cultural impact cannot be overstated. Content made by insiders instead of outsiders is simply more accurate, and more meaningful; a non-sex worker crafting content like memes about sex work is going to lack nuance. This is even more true for sex workers of color, especially Black sex workers, whose working experiences can differ from their white counterparts in ways that white workers may not realize. These groups have carved out space on social media to speak for themselves. Aiden Arata, @aidenarata, with more than 23,000 followers, a new media artist who has worked in social media, believes there’s definitely been targeting. “In my experience as a user, and in the experience of many of my friends, mutuals, and pages I follow, queer and/or [sex-work] pages—especially those run by folks of color—experience post removal, shadowbanning, and [entire] page removal at a higher rate than pages [that] don’t cover queer and/or sex-worker content.” 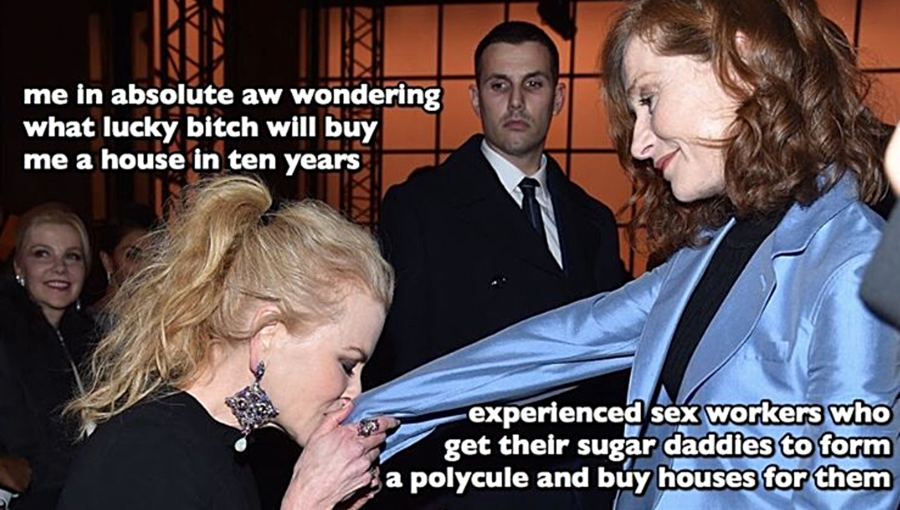 The lack of social-media support for accounts run by marginalized people has repercussions when it comes to community-building, and even safety. @local_._honey says that shadowbanning “has fractured the sex work community on Instagram and every other social-media platform. I find myself searching manually for accounts that used to be at the top of my [scroll]. Having to wonder if the sex worker you follow [who lives] across the country is safe or not is a feeling that goes beyond the usual bonds of social media.”

We, just like everyone else, are cataloguing our moments and emotions and experiences in the same way cishet and non-criminalized people are. @local_._honey has started to self-censor for fear of losing the connections she’s made through Instagram: “Having to eliminate so much of your daily life experience for Instagram, at the risk of losing the very community who shares that experience, is exhausting.” @hotmessbian, who runs a LGBTQ-centered meme page with more than 39,000 followers, tells Bitch, “It’s frustrating to get punished with [diminished] exposure because I posted something Instagram doesn’t deem appropriate.”

A meme page isn’t just a meme page—these pages shape culture and spread information, love, and community, and when meme accounts made by and for marginalized communities are targeted, they risk becoming even more fragmented and isolated. When asked if they’d ever consider leaving Instagram for a different platform, the accounts I talked to all saw it as a losing battle. It’s not just that censorship is increasing online across the board; it’s also difficult for meme accounts to pivot as Instagram is the primary home of memes at this point in time. With the internet at large shaped by FOSTA-SESTA, where can people who want to post queer content or content about sex work go to build invaluable digital communities? Many marginalized users are wondering if there’s space for them at all, and are seeking alternative online social networks even as the internet at large will likely continue to see increased censorship due to the lack of specificity built into FOSTA-SESTA as a whole.

Read this Next: Popaganda Episode: Sex Work is Work

by Sarah Mirk
Discussions of sex work often get mired in a couple basic questions: is it “good” or “bad”? Are sex workers empowered or...